Year In Review
UPLINK
UPLINK: Reflections + Projections, by Hartley Lesser, Editorial Director, SatNews Publishers
While this past year generally was a pleasant experience for our industry, next year may find the experience more challenging. Insulation from the economic woes currently stressing governments and citizens alike will be sought. Cocooning will occur, as less and less disposable income is available for extracurricular activities. People will want and demand more and more in the way of home-based entertainment — offerings highly reliant upon satellite delivery. IPTV, DTV, Mobile TV, radio, web — all are big players with satellite connectivity needs.
UPLINK: Top 10 Reasons 2008 Was Great In Space, by Elliot Pulham, CEO, Space Foundation

by Elliot Pulham, CEO, Space Foundation
If you're like most Americans, you're very happy to see 2008 come to an end. Pockmarked by the scars of a long presidential campaign and a global economic meltdown, 2008 will be remembered as a long season of unwelcome news, punctuated by a historic moment of hope as Americans elected Senator Barack Obama to be president of the United States. Nonetheless, a series of dramatic events in space were playing out in the background, assuring that 2008 will be remembered as a great year in space.
YIR: COLUMNIST INSIGHTS
A Blisteringly Good Year For Europe,

by Chris Forrester
We need to find a new word to describe Europe’s satellite progress over the past year. Looking back a year we described 2007 as “spectacular”, and in 2006 we said “action-packed”, while 2005 had been in our view “exciting”. But how do you top ‘spectacular’? The answer, as far as 2008’s trading is concerned, is that the year has been an amazing one for European satellite operators. They’ve made profits, added impressively to their fleets, maintained fill rates, and seen their all-important margins improve.
Peering Around The Curtain, What surprises does 2009 hold for the space industry?
by Peggy Slye, Division Director, Futron
A year ago the space industry’s near and mid-term future looked extremely bright, with annual industry studies happily validating individual organization’s reports of increased revenue, improved sales, strong revenue growth and enhanced profitability, all buoyed by several years of consistently increasing global demand for satellite based services. Through the first half of 2008, strategic financial transactions continued to close, albeit at a somewhat slower pace than in previous years. Globally, government space programs maintained focus on expanding their military and civil projects. By all the signs and leading indicators, the pundits agreed that, although some overdue government policy and commercial sector adjustments were certainly wellwarranted, there was no need to look for clouds on the horizon. And there was certainly no reason to anticipate an interruption in the industry growth trends that had been solidly in place since 2003.
Annus Horribilis or Annus Mirabilis?,
by Hoyt Davidson, Founder, Near Earth LLC
To borrow from Queen Elizabeth II, the year 2008 “is not a year on which I shall look back with undiluted pleasure… it has turned out to be an Annus Horribilis.” Depending on your view of the U.S. Presidential election, you may believe the year had an offsetting “Annus Mirabilis” event or, alternatively, just more Horribilis.
The Legal and Regulatory View,
by J. Steven Rich, Attorney, Paul, Hastings, Janofsky & Walker LLP
The year 2008 has been a time of change in many respects. Continuing turmoil in worldwide markets, for example, has created challenges for numerous companies in virtually every sector of the economy and the satellite industry has not been immune. Regulators around the world have faced challenges of their own this year, and while their actions may have sometimes been overshadowed by world events, they have nevertheless kept themselves busy addressing numerous satellite-related matters in 2008.
The Age of Uncertainty,

by Robert Bell, Executive Director, World Teleport Association
Certainly 2008, despite its surprises, has been a good year for our business. Looking forward toward 2009, optimism may not be justified — but neither is the world crashing down around our ears. Mostly, we will have to wait and see – and get used to living in an age of uncertainty.
FOCUS
The Maritime Market: VSAT Rules,

by James Dell, Co-Founder, Parallel
There are a number of segments within the maritime niche that have been well targeted by satellite vendors and these segments are now effectively saturated. These include cruise lines, oil & gas supply, and ferries. These sub segments are small in volume — less than 1,000 ships in total — but high in value. The related market in the oil & gas business includes supply vessels, drill ships, seismic vessels, and dive support services, so you can see why such should be included in the maritime market segment.
FOCUS: New Era For SatRadio Distribution, by Gary Carter, V.P. and CTO, International Datacasting Corporation 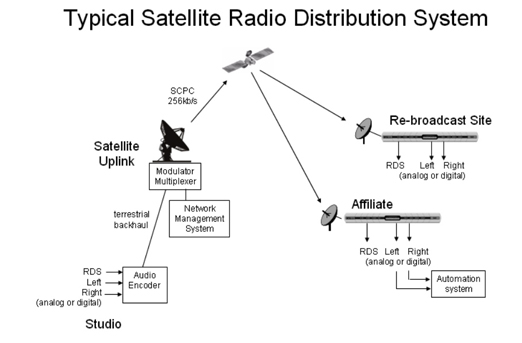