The opportunities, and challenges, facing the Asia-Pacific satellite market are enormous. Issues are significant and include everything from; capacity; installation and support of new technologies; and investments required by firms, both long imbedded as well as new to the market. This article presents the thoughts and the view of leading company executives and research analysts — those “more than knowledgeable” — regarding operations in this market.
Features
Let The Games Begin… in China,

The Beijing Olympic Games are expected to find some 800,000 visitors arriving in town for the 17-day event. China is spending approximately $160 billion for public works’ improvements and the event’s venues, including refurbished and new roads, subways, and sports’ stadiums.
Transforming Satellite Broadband,

by Mark Dankberg
The first time the “radical” concept of a 100 Gbps satellite was introduced was four years ago, at Satellite 2004 with a frank presentation explaining why business as usual in satellite broadband wouldn’t work.
Here's Looking... At Everything - Part II, Remote Sensing / Satellite Imagery

In this edition of the ongoing Remote Sensing / Satellite Imagery series, as well as in Part III, we’ll present the leading, commercial satellite imagery firms. In Part II, we present Digital Globe and GeoEye.
Satellite Interference: Tech To The Rescue,
by Bob Potter
Interference costs satellite operators millions of dollars each year. Solutions such as sophisticated, cost effective tools are now available that allow operators to plug leaks that cost the loss of revenue as a result of interference. The good news is that the expense of interference mitigation tools can be recovered in less than a year by increasing revenue and lowering costs.
Communicating Down Under — A New View,

by Adrian Ballintine
Billions of dollars are involved in order to connect the relatively easy locations of Australia. Yet there is no current national satellite policy, and no explicit, over-arching policy solution, yet, for the remotest of Australians. The same holds true for the 80 percent of the Australian landmass devoid of fiber and other similar technologies. Happily, for those people in the bush, it is in satellite technology that a paradigm shift is now apparent. Satellite is appearing where it is most needed, with increasing cost efficiency and performance.
Insight
High Stakes Patent Litigation Has Found A Home,
by Robert Masters, Tara Giunta and Erin Sears
Like it or not, high stakes patent wars are waging in the global satellite sector, and it is safe to assume that they are here to stay—given the money at stake. Just ask Echostar, DirecTV, and Finisar.
INSIGHT: TBS—Looking At Further Diversification,
by Chris Forrester
Internationally, Turner Broadcasting has always walked hand-in-hand with the growth of satellite and cable – and now IPTV. Turner Broadcasting has been active in Europe since 1985 with CNN International, five years after the domestic CNN network launched. Cartoon Network followed, along with Turner Classic Movies in 1999. Indeed, it is fair to say that CNN and Cartoon Network (and probably MTV) were the channels that every multichannel operator needed as part of its core offering.
Insight - The Key To DTH Success In Asia, 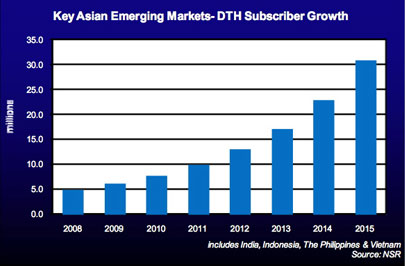 by Jose del Rosario
As the world’s attention turns to the U.S. due to the impending recession that could have serious consequences for the global economy, some are eyeing Asia as a haven for economic safety or even economic growth amidst the current global slowdown. Indeed, the region has two budding superpowers with the dynamic economic performance of China and India. The region likewise has countries that have shown impressive economic numbers in recent years that include Indonesia, the Philippines and Vietnam.
Asian SatApplication Trends + Evolutions,
by Andrea Maléter
Asia is perhaps the most diverse of all regions of the globe from a range of perspectives – social, political, economic, and business. Telecommunications, cutting across all of these areas, reflects this diversity — and satellite services are no exception. Despite this variety, there are some key generalizations that can be made regarding satellite markets in Asia (including the Pacific Rim).
Regular Departments
Featured Satellite - Thuraya-3,

The Thuraya-3 satellite was built by Boeing and has a designed lifetime of 12 years. Thuraya, based in the United Arab Emirates (UAE) and founded by a consortium of national telecom operators and investment firms, offers MSS services to more than 110 countries in Asia, Africa, Europe, and the Middle East.
Executive Spotlight On... Andrew Jordan,
Andrew Jordan is President and CEO of SAT-GE and has more than 20 years of experience in the management and development of new markets and products throughout Asia.
Event Profile... CommunicAsia2008,
The Asia-Pacific market deserves your close scrutiny, as this region is a superb environment for the technologies and capabilities of satcom. To help us wade through the complexities of this market segment, the CommunicAsia2008 event is upcoming and will meet in Singapore from June 17th through the 20th.
Communications Connectivity Conference,
Nothing succeeds like success. So goes the maxim. Working, then, from this maxim, the upcoming ‘Oil & Gas Communications: North Africa & the Middle East’ conference—or O&GC3—on June 16th to 17th is certain to be a stimulating event.