Satellite Launch Sector
UPLINK
UPLINK - To Positive Effect...,
We work in an amazing industry, yet there are days when the mechanics of our duties edge on the mundane, when repetitiveness can be a challenge to the thought processes. This occurs to all of us, no matter our position in our organizations. Fortunately, and this is proven by our industry’s continued success and growth, the technologies and the spirit with which new opportunities are faced drive our enjoyment factor at “what we do” to new heights of personal and business enrichment.
EXECUTIVE SPOTLIGHTS
EXECUTIVE SPOTLIGHT - John Higginbotham, CEO, Integral Systems

The recently named new CEO of Integral Systems, Inc., is an individual who is a “mover and a shaker” within our industry. John Higginbotham, the founder and former Managing General Partner of SpaceVest Capital (which is now known as Redshift Ventures), joined Integral in July of 2008.
EXECUTIVE SPOTLIGHT ON - Dr. Alan Amir, CEO, Bivio Networks

by C. Karr
A modern day Renaissance man, living a broad and balanced life with many roles, from being a soldier to scholar to leader, Dr. Elan Amir has always been comfortable approaching life’s challenges. His passion, drive, and diversified background provide the CEO of Bivio a unique vision to shed light on a new networking technology — deep packet inspection. Through a discussion recently held with Dr. Amir, his thoughts on networking and his company reveal how the industry is changing… for the better.
EXECUTIVE SPOTLIGHT ON - Edward M. Morris, NOAA,

by Jeffrey Donald and Hartley Lesser
In January of 2006, Edward Morris was appointed Director, Office of Space Commercialization (OSC), within the U.S. Department of Commerce. His office is reponsible for implementing national space policies and promoting the capabilities of the U.S. commercial space industry, all the while acting as a liaison with the Executive Branch to make certain the U.S. Government maximizes its use of commercially available space goods and services, while avodiing legal and regulatory impediments and does not compete, itself, with the U.S. space industry.
EXECUTIVE SPOTLIGHT ON - David Justin, Chief Executive Officer, GlobeCast Asia

In April of 2006, David Justin was asked to take the reigns as the CEO of GlobeCast Asia. Based in Singapore, he manages all of the company’s operations in Asia. These include a master control center and the access to teleport facilities in Singapore

by Jeff Foust, Ph.D. - Senior Analyst, Futron Corporation
The market for commercial launches of satellites to non-geosynchronous orbits (NGSO) is very different from the market for launches of geosynchronous orbit (GSO) satellites. In the case of the latter, the market is comprised almost exclusively of commercial communications satellites, a relatively mature market that, while cyclical, is not prone to huge swings in demand.
INSIGHT - The Emerging Launch Market Threat?,
by Prashant Butani, Analyst, NSR
Clearly there exist three factions of the satellite launch market when measured against the yardstick of satellite launching capabilities. “The Big Three”, comprised of Arianespace, Krunichev (ILS) and Sea Launch, form the most formidable of these factions. Bringing up the rear are what we shall term “The Emerging Three” — China’s CASC, Japan’s JAXA, and India’s ISRO, all of whom are moving hard and fast toward closing the gap.
INSIGHT - If We Build It, Can They Launch It?,

by Robert Bell, Executive - Director, Society of Satellite Professionals International
With a 12 to 15 year life expectancy, it was not unheard of for satellites to take up to 7 years to reach 70-80 percent capacity in the past. These days, however, many satellites are being launched with anxious customers waiting to flip the switch as soon as the satellite is pronounced operational. It’s not a huge stretch to conclude that building and launching even more satellites would provide additional capacity and additional revenues.
INSIGHT - Mobile Satcom Systems Regs + Approvals,

by Guy Nayum
The widespread use of the Internet, and the ever increasing demand by end users to be connected, every-time and every-where, is slowly but surely penetrating into the mobile satellite communication (Satcom) world. This is true in the Air, Train and Ground platforms, but especially in Marine applications. Moreover, in today’s modern digital communication environment, broadband connectivity at low affordable cost is no longer a “wish” but rather a “demand”.
FOCUS
FOCUS: Satellites and WiMAX,
by Jorn Christensen, Ph.D, P. Eng.
Improvements in telecommunication infrastructure are usually evolutionary, building upon the existing technology. However, sometimes a new technology that performs the same functions as an existing technology is brought to market and may replace, to a large extent, the existing technology. Many analysts believe that WiMAX has the potential to be a disruptive technology as it may replace wire-based telecommunications services, such as fixed copper telephone lines, or cable coaxial cable. What does this have to do with satellite communications?
FOCUS - DVB-S2 —Beyond Video Broadcast,
by Colin Mackay
The Digital Video Broadcast for Satellite (DVB-S) Standard is well known and heavily used throughout the satellite Industry. Though initial adopters used this transmission format as a way to efficiently deliver TV programming, it wasn’t long before DVB-S became a method of choice for two-way services as well. Release of the DVB-RCS Standard enticed manufacturers to develop duplex communications products and architectures as another step in the relentless pursuit of satellite-spectrum efficiency.
FOCUS - New Evolution in Network Management Systems,

by Richard Fullerton, Newpoint Technologies
Since the inception of device management systems, network operators wish to see the concept through to its ultimate end — a single console providing end to end control of the disparate equipment and subsystems comprising a modern communications network. Initially, divergent hardware protocols made this impossible. This gap was closed at the close of the last decade when intelligent controllers allowed you to use a single solution for managing the serial as well as contact closures.
FOCUS - SatLink Mesh Networking, 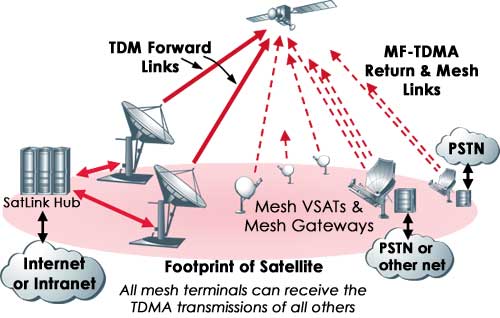 by Richard Forberg
A promising new generation of satellite mesh networking with greater efficiency and reliability has emerged as a means of achieving low latency connections between two VSATs. Only a single “hop” to the satellite is needed, which reduces transit delays and bandwidth consumption in roughly half the time that was previously required. This certainly moves mesh networking to the top of any implementation list for real time traffic applications such as local telephony in rural areas (e.g. village-to-village).
CASE STUDIES
CASE STUDY - COW To The Rescue,
by Mark Gilbaugh, Keith Lewis, and Tac Berry
Normally the COW can be rolled into a parking lot, powered up, and then connected to local switching equipment using standard Telco T1 interfaces (wired or wireless). The system then performs like a reserve switching point for the overload of mobile voice and data traffic. As was shown during the Big Sur fires, a COW can also be used in emergencies to extend cellular services to remote areas with the right combination of technology and expertise.

by Tim Nichols
Astrium designs and manufactures customized satellites and provides services through its own space platforms. A wholly owned subsidiary of the European Aeronautic Defense and Space company (EADS), Astrium has 12,000 employees and state-of-the art facilities in France, Germany, the United Kingdom, Spain, and the Netherlands. Astrium was recently selected to build the European Space Agency’s Mercury mission, BepiColombo, and is the single prime contractor for the Ariane 5 launcher.
CASE STUDY - Optimization for Mobile Deployment,

by Fred McClimans
As a provider of secure mobile communications systems to the U.S. Government and military, we often encounter operational requirements that go beyond the norm of traditional COTS (commercial-off-the-shelf) solutions. In this particular case study, DTECH LABS was tasked by a particular organization to evaluate both their existing deployed COTS (in a rack) system and their communications requirements with a goal to develop a more tightly integrated, and better performing, communications package.
CASE STUDY - The Integrating Factor,
by Marci Paskowitz Possner
Following Intelsat’s acquisition of PanAmSat in 2006, Intelsat desired to consolidate operations of both companies’ satellites using the Intelsat Flight Dynamics System (FDS). As part of the Intelsat integration project, GMV and Intelsat worked together to develop portions of the necessary software modules into FDS to support the flight dynamics operations of Boeing 702 satellites.
EVENT PROFILE
EVENT PROFILE - The Digital Oilfield,
by Martin Jarrold
Since 2006, GVF (in partnership with UK-EMP) has produced three widely acclaimed ‘Oil & Gas Communications: Middle East & North Africa’ conferences held in Cairo and a highly successful Oil & Gas Connectivity: Digital Applications & Communications Dynamics conference in Aberdeen in 2008. The regional expansion into the European oil & gas patch earlier in 2008 will be followed-up in November this year by Oil & Gas Communications South East Asia: Digital Applications & Communications Dynamics Onshore, Offshore & Deepwater (O&GCSEA).