Networking of digital television content has, for a long time, suffered adverse effects caused by multiple satellite, microwave and terrestrial links—these effects are referred to as “concatenation.” In legacy analog systems, demodulation and re-modulation of the signal at intermediate points in the network contributed to signal degradation, particularly signal-to-noise, which in many instances reduced the image at the point of delivery to less than that normally acceptable in broadcast television operations.

The transition to digital video has created new challenges in preserving the fidelity of content in concatenated links, where multiple encode-decode operations are necessary in digital turn-around over satellite, wireless and terrestrial links. One particular problem is maintaining the integrity of a 4:2:0 chroma component when a High Definition-Serial Digital Interface (HD-SDI) interconnect is used between concatenated decoders and encoders. This relates equally to MPEG-2 and MPEG-4 (H.264/AVC) codec standards. 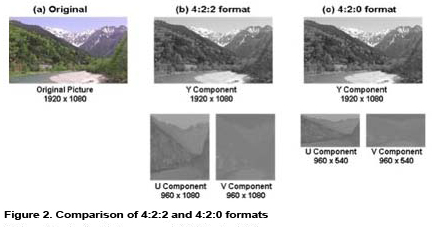 HD-SDI is inherently a 4:2:2 interconnect, which requires a 4:2:0 signal to be up-sampled and down-sampled at each digital turn-around. Within as little as 4-5 concatenated links, this can result in visual blurring of the color image to the point where the picture fidelity and integrity of HD content can be severely compromised.

This problem is of particular concern in HD Electronic News Gathering (HD-DENG) where the use low data rate encoding and 4:2:0 chroma sampling can provide operational and economic advantages. In HD-DENG, as many as 10 or more concatenated operations can take place before final delivery to network affiliates and others.

The two most widely used chroma encoding formats in broadcast television applications are 4:2:2 and 4:2:0 (see Figure 2).

With the introduction of MPEG-4 Advanced Video Coding (AVC) encoding, it is generally accepted that lower encoded video data rates (those at or below 10Mbps) are sufficient for broadcast fidelity HD video, and that the use of 4:2:2 chroma sampling will not produce a significant improvement in performance over that of 4:2:0 at these lower encoded data rates. In addition, 4:2:0 requires approximately 20 percent less bandwidth than 4:2:2 encoded content.

This has traditionally represented a challenge for organizations: should they use 4:2:2 chroma sampling and accept the need for 20 percent more bandwidth, or should they use the more efficient 4:2:0 format and accept potential chroma degradation in concatenated links?

The good news is organizations no longer need to make a choice due to work done by Dr. Akira Nakagawa and engineers at Fujitsu Laboratories in Japan.

Fujitsu engineers have developed a technology solution to chroma down-sampling and up-sampling using a Perfect Reconstruction Filter. This new filter technology has been integrated into Fujitsu MPEG-4 products, including the IP-9500 HD-SD encoder.

The Perfect Reconstruction filter is designed to accurately separate the chroma component of an original HD-SDI (4:2:2) video input and down-sample it by using a low pass filter and a 2:1 vertical sampler. The 4:2:0 output is then created by combining the down-sampled chroma with the luma component as shown in Figure 3. 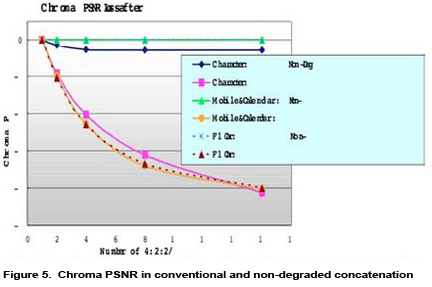 The MPEG-4 (4:2:0) encoded output can then be carried efficiently over any digital communications link — satellite, wireless, telco, VPN or Internet — to an intermediate destination or digital turn-around point. Then, by using a decoder fitted with a Perfect Reconstruction filter, the 4:2:0 / 4:2:2 up-sampling process is performed to connect the second encoder in the concatenated link using the HD-SDI interconnect, at the same time preserving 4:2:0 chroma fidelity and integrity.

As many as sixteen (16) concatenations were conducted in testing without degradation of the 4:2:0 chroma component. In these tests, a comparison of the original chroma PSNR was made with that at the output of the 2nd; 4th; 8th and 16th concatenated decoders. 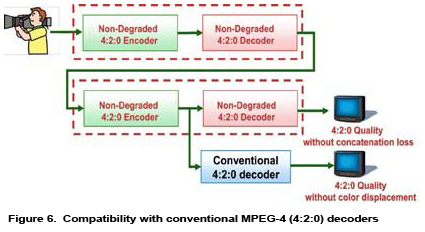 Test results (shown in Figure 5) clearly demonstrate the difference between chroma degradation in conventional concatenated operations and the protection provided by the non-degraded 4:2:0 solution, which maintained a peak signal-to-noise ratio (PSNR) close to that of the original 4:2:2 source.

The objective of maintaining compatibility with conventional MPEG-4 decoders has also been achieved, which enables a Fujitsu non-degraded 4:2:0 stream to be decoded without errors or color displacement by other manufacturers’ conventional decoders, as shown in Figure 6 on the next page.

It is generally recognized that down-sampling and up-sampling are more difficult for interlace than for progressive video largely because of non-linear phase characteristics. The generation of unwanted artifacts is also more pervasive. Both of these factors were considered in developing a solution equally valuable to either interlace or progressive video. The test sequence in Figure 7 demonstrates protection of the chroma component in a concatenated operation employing non-degraded filter technology. 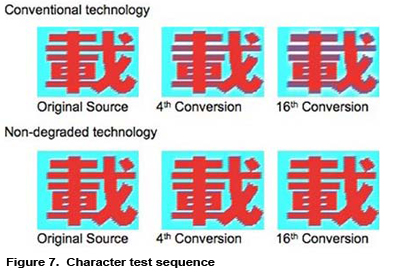 The long-time problem posed by concatenated encode-decode operations is now a thing of the past. The Fujitsu Perfect Reconstruction filter helps preserve 4:2:0 chroma fidelity without creating any incompatibility within the MPEG-4 standard. In addition, it allows full interoperability with other manufacturers’ decoders, although these will not provide protection of the 4:2:0 chroma integrity in concatenated operations as do those equipped with the Perfect Reconstruction filter technology.

For more information about this breakthrough in digital media technology and its implementation, please visit:
http://us.fujitsu.com/video.

About the author
Rich Harvey has more than 15 years of experience in the broadcast, satellite and video distribution industry, including the management of a Navy Broadcast Service (NBS) S.I.T.E system onboard the USS Suribachi (AE-21), as sales manager of the Asia Pacific Rim for a leading digital TV equipment manufacturer and as the video product manager for another industry leader.

Rich has been involved with some of the industry’s digital milestones, including the Navy Broadcast Service’s digital satellite broadcast tests in 1991, ABC’s ATSC turn on, the first HD broadcast in Sydney, Australia, the first commercial ATSC broadcast in South Korea, the first MPEG-2 4:2:2 transmission over an ATM network, just to name a few.