At first glance, why would an established, or entrepreneurial, state-of-the-art space or satellite business choose to base itself on a small island in the middle of the Irish Sea, some 30 miles off the UK mainland? With a population of around 84,000, boasting the world’s oldest continuous Parliament stretching back well over 1,033 years, the Isle of Man might seem an unlikely location for such a forward looking industry. However, with all due consideration to the past and long standing political and economic stability, it’s to the future—or more specifically, the skies above—where a growing portion of the island’s versatile economy is now firmly focused. 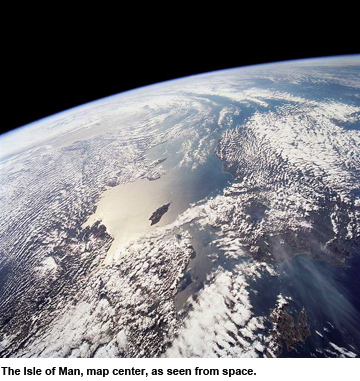 Today, just a few short years after the Isle of Man started, by design, to focus on the space and satellite sector, four of the world’s top 10 satellite companies are now based there. The Space Data Association, the Satellite Interference Reduction Group and the International Institute of Space Commerce have all been established as not-for-profit organizations in Douglas, the Island’s capital. The jurisdiction is also now home to the newest chapter of the Society of Satellite Professional International (SSPI), the largest professional association in the industry. This summer, the Island will also host the founding conference for a new Space University, focused on the development of undergraduate education in space.

In addition, recent international space industry reports note the Island’s core focus is on satellite financing and innovation in space commerce. Others suggest that due to its commercial focus, via Island based companies such as Excalibur Almaz and Odyssey Moon, the Isle of Man is now the fifth nation most likely to return to the Moon.

At present, the Island’s star is very much in the ascendancy, according to Tina Rawlinson, Director of Cavendish Trust (http://www.cavendishtrust.com), one of the Isle of Man’s leading niche international trust service providers, with strong connections to the space and satellite sector. “The Isle of Man is fast becoming the jurisdiction of choice for the establishment and administration of space and satellite companies,” she said. “This is an extremely space friendly environment where we also enjoy one of the highest standards of living in Europe.”

Rawlinson is herself a graduate of the International Space University of Strasbourg and with a team dedicated to the space and satellite industry, Cavendish is now among an exclusive number of Isle of Man trust companies qualified to provide all-inclusive legal and fiduciary solutions for space related companies. These services would apply either for those considering setting up an Island based business or for existing structures.

The Company has partner status with ManSat (http://www.mansat.com), the privately run business approved by the Island’s Government to handle orbital filings with the International Telecommunications Union (ITU) in Geneva on behalf of Isle of Man based or incorporated companies.

What makes the Isle of Man such an advantageous location for conducting space business? One reason is that the Isle of Man is recognized as a well-regulated, commercially focused jurisdiction, with a AAA rating from Standard and Poor’s and AA+ rated by Moody’s. Furthermore, in today’s shifting global climate, the political and economic stability offered by the Isle of Man, together with its renowned dedication to the Rule of Law, are also key considerations.

Yet, fundamental to the Island’s appeal, is the ‘pro-space’ stance of the Government, with its strong political commitment to developing space commerce. The Island has developed space- friendly legislation, which has helped create a strong base of space, aerospace and high tech industries. This is supported by a world class telecommunications infrastructure which has, in turn, encouraged the growth of excellent local telecoms support service providers, offering state-of-the-art hosting, IT and digital media.

Significantly, the Isle of Man was also the first jurisdiction in the world to offer a zero corporate tax rate to space and satellite businesses, plus a highly competitive insurance premium tax rate for the industry.

Additionally, the Government remains committed to the development of space law and finance. A regulatory ‘level launch pad’, if you will, with a core concept of neutrality in all areas, allowing competing space and satellite companies to all work from the Island without too many of the complications, real or imagined, that can be found in other jurisdictions.

“The Government is very pro-space and we are proud that this stance has enabled us to build a formidable base of space, aerospace and high tech industries over the last few years. We see this trend continuing. We also have in place a world class, professional infrastructure of legal, fiduciary and service companies. Everything is here for the space sector to flourish,” explained Tim Craine, the Isle of Man’s Government’s Director of Space.

Tim also emphasised that the Government was keen to provide financial incentives and grant aid for businesses that created new jobs on the island. Mr. Craine also stressed that the Isle of Man encouraged flexible employment laws which made it easy for Island based companies to use contract workers—which might not necessarily be the case in other jurisdictions.

Annual growth of around 9 percent in the Island’s space and satellite sector is being watched with a growing sense of achievement at ManSat, who are now handling an unprecedented number of inquiries from companies that are seeking orbital slots.

ManSat estimates that the financial advantages of flying a geostationary satellite via an Isle of Man orbital position, as opposed to one flagged in the U.S. or UK., are in excess of US$100m over the approximate life cycle of a satellite. “When looking purely at the bottom line, that’s a definite advantage the Isle of Man has to offer, in addition to its other regulatory and financial advantages.

It’s easy to see why some of the top commercial satellite companies are already here,” said ManSat Chairman and CEO Chris Stott. He further pointed out that another trump card for the Island was that, as a British Crown Dependency, it was recognized as being British for United States Export Control and ITAR purposes. “In terms of satellite communications companies making orbital filings with the ITU, the Isle of Man is now in the top five jurisdictions in the world, ranked behind only the United Kingdom and the United States,” added Mr. Stott.

Even despite current global economic uncertainty, Tina Rawlinson believes the Isle of Man can stay ahead of the curve, thanks to its favorable location status. “The space and satellite industry is now recognised as being an increasingly important niche market for the Island,” she said. “With our advantageous tax regime, satellite companies can achieve significant savings by structuring the operations of group holding companies or subsidiaries in the Isle of Man, or by establishing R&D or manufacturing centres on the island.” 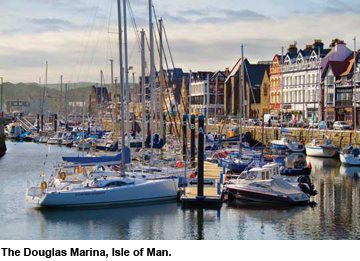 The ingredients which have helped make the Isle of Man a location of choice for the sector are not simply being championed from within. A recent U.K. Economic Policy Centre Report on U.K. Space Policy quoted the Isle of Man as being one of the best places in the world to base a space business. Furthermore, the Island was also recognized as a favorable location in a February 2011 report by the U.S. market research firm, Futron, which highlighted the Isle of Man’s cutting edge satellite financing. The study, entitled “Innovative Strategies for Space Competitiveness”, stated that the Isle of Man had “developed a unique governmental approach to space, focussed on economics tied to developing private sector financial, regulatory, legal and administrative services that supported international aerospace companies.

“The Isle of Man’s unique approach to space activity allows it to punch above its weight in terms of global visibility in the space industry. [We] imagine other nations and jurisdictions will look to the Isle to replicate its success,” the Report added. (http://www.futron.com/resources.xml) 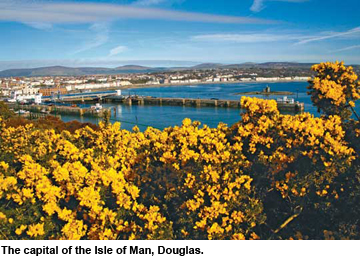 In reference to the Futron study, ManSat’s Chris Stott said, “It speaks volumes that such a highly respected international consultancy firm specialising in the space sector should have produced such a positive analysis of the Isle of Man’s vibrant, diverse and rapidly growing space industry.”

Having recently returned from Satellite 2012 in Washington DC, the tenth year the Isle of Man has sent a delegation, Stott and Rawlinson couldn’t be more bullish about the Island’s prospects in the sector. Stott commented, “We spoke to companies from all across the world and were pleasantly surprised by the amount of awareness there was of our Island’s involvement in the satellite industry. Our message to them was clear: If you are looking for a space-friendly environment, then you really can’t afford not to consider the Isle of Man as a viable option.”

For a jurisdiction just 33 miles long and 13 miles wide, that also happens to be family friendly and enjoys low crime rates, the sky really does not appear to be the limit. 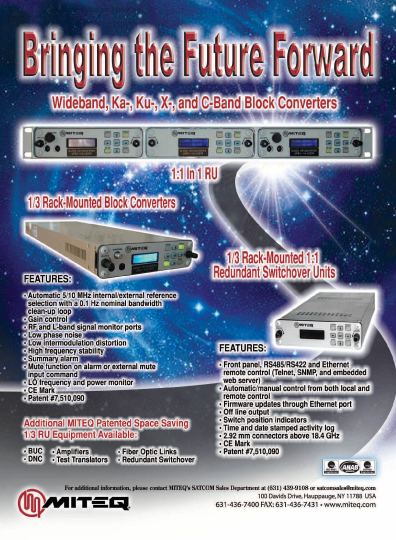