“This past year has seen the U.S. dramatically reduce its equipment buying levels, and this is the first time we have seen this in the U.S.,” says Serge Van Herck, CEO at Newtec. “We have been able to grow very nicely in other parts of the world and this has stabilised and compensated those lost revenues. Our view for 2012 is that the U.S. market is at last picking up, and we see clear signs of this already. But, like everyone else, we hope that Europe does not move into recession.”

“For future growth we expect further improvements to come from Asia, and India in particular. Brazil is also showing solid signs of growth and there’s no let up as far as the Middle East is concerned. They all represent real signs of further growth. Latin America for us is extremely busy,” Van Herck added. 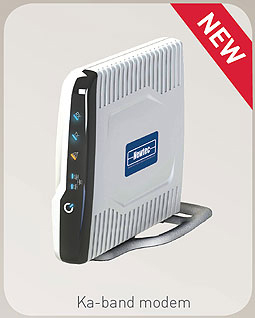 Newtec is an acknowledged powerhouse in the TV industry. For example, their modulating equipment, either under their own brand-name or OEM/badge-engineered by the likes of Cisco/Harmonic, Motorola, Thomson and others, for DTH uplinking and cable head-end installs. They consider themselves to have an 80 percent market share of this sector. “We are not on the reception side, but the uplinkers almost all use our equipment,” adds Van Herck. “This means that in countries like Brazil and India the broadcasters themselves use our equipment.”

Newtec’s equipment is also extremely popular amongst the Contribution & Distribution community which guarantees the successful — and efficient — transmission of content from Outside Broadcasts as well as SNG and ENG broadcasts and uplinks. “For example, our MENOS technology links dozens of ASBU (Arab States Broadcasting Union) sites for news and programming exchanges, and has been hugely successful for them. This is now extending beyond the Middle East into Africa. MENOS allows broadcasters to automatically exchange news and information in a hugely efficient manner, and covers TV, radio or IP-based formats.”

Van Herck mentioned that Newtec’s clients were almost all digital, and increasingly use high-definition for broadcasting. “This is great news for everyone, especially viewers, but it also places pressure on us to increase efficiencies in transmission, finding better ways to utilise the bandwidth available. Everyone wants to use HD but not necessarily to pay for extra satellite capacity. We are a major player supplying higher-efficiency products in particular for the 32APSK (Amplitude & Phase Shift Keying) modulation methods, even to quite small dishes,” says Van Heck.

“Service providers like Globecast and Arqiva are using our equipment, but also broadcasters themselves. Much depends on the individual country and how that market is organised. For example, Sky Italia has made great use of our ‘Equalink’ DVB-S2 pre-distortion solution which gives them an overall 10 percent extra performance increase, or the equivalent to two ‘free’ channels on each of the 23 transponders it uses.”

Newtec is also busy in the fast-growing market for Ka-band solutions, both for professional and consumer use. “We work closely with Astra2Connect in Europe. They launched in 2008 using our technology and today still use our equipment. We have delivered more 100,000 terminals. 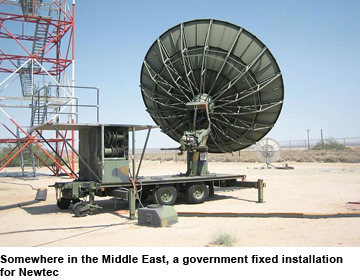 “Today they are all Ku-band but there’s now a shift to Ka-band as the capacity becomes available. We have been very successful in delivering broadband by satellite over Ku-band, and we know everyone is anticipating great economies of scale from Ka-band. Newtec equipment is seen as the most efficient, most reliable and cost-effective equipment on the market. Our kit always comes out on top in consumer surveys. Ka-band will increase the interest in these technologies given that it offers higher throughput at very similar, or even lower, prices for users. Today our largest customer in this area is Astra2Connect and next September (2012) they will launch their Ka-band service for commercial use and we will be ready to support them. They’ve already got some Ka-band capacity available for professional use, but these need slightly larger dishes. Our consumer offering, which we call Sat3Play is a self-installable, plug- and-play, end-user terminal which is truly future-proofed as far as DVB-S2 is concerned with Adaptive Coding & Modulation, bandwidth optimisation and embedded acceleration and pre-fetching software. The current products, dish and modem are all Ka-band compatible. The only element that needs changing is the LNB.” 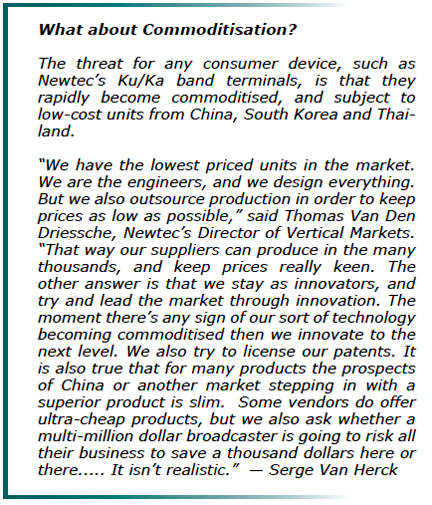 Van Herck sees Newtec’s broadband-to-consumer products as remaining highly competitive when compared to imported units from ViaSat which are being used exclusively by Eutelsat’s Ka-Sat service and which went live earlier in 2011. “We also like Eutelsat! They’re installing one of our Sat3Play hubs for a service targeted into Africa. I believe we are moving towards a situation where [supplier] exclusivity will not matter so much. We see more and more indications where service providers, who are actually retailing Ka-band solutions, want a multi-vendor approach. We think this is sensible, and where the satellite operator just sells Mega-Hertz of capacity but where the service provider accesses that capacity through gateways.”

He could just as easily have enthused about Intelsat, which via its SkyeVine client, is providing a Newtec-based broadband service from Intelsat’s New Dawn craft into Southern Africa, or the UAE’s YahSat which is using Newtec solutions for its YahClick 2-way broadband service. 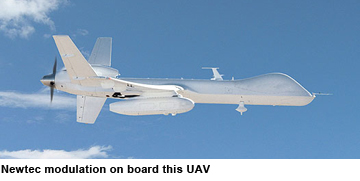 However, SES has frequently stated its view that it does not share Eutelsat’s optimism for Ka-band over Europe. This is not to say that those countries bordering Europe, or nations further afield, would not benefit from Ka-band deployment. This is also Van Herck’s view. “I’d hope he might change his mind thanks to Astra2Connect and our equipment, but we have to recognise that 100,000+ terminals installed is good but is not perhaps good enough to convince Astra just yet to launch an all Ka-band satellite. I can fully understand SES’ current philosophy which is to be risk-averse as far as Ka-band is concerned, and from a financial perspective it is a prudent approach. Time will tell as to how successful Eutelsat is and whether Astra’s caution was sensible or not.”

Newtec, as well as Astra2Connect, might also benefit from any national or pan-regional marketing and sales effort for Ka-Sat conducted by Eutelsat, on the ‘rising tide lifts all boats’ mantra. “It is always good to have competition,” says Van Herck. “The main road block to these services are the telcos. There is no European telco actively promoting these sorts of services. If you look to the USA you’ll find our type of services being vertically integrated by major operators, and often bundling or linking them in to other services like DTH.” 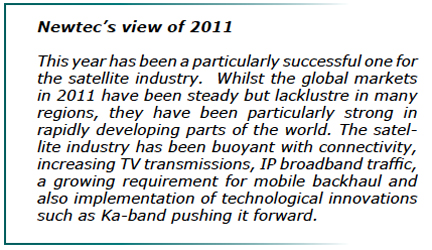 Van Herck says the quite amazing thing is that its Astra2Connect terminals have not been heavily installed in rural, or remote unserved-by-broadband areas as initially expected. “The reality is quite the contrary. We see most of the demand coming from countries which already have high penetration. Even in cities and urban areas, or in the suburbs where the ADSL connection is not so strong. Currently the two most important markets for us are France and Germany, not exactly famous for lack of broadband!”

Newtec’s consumer products have benefitted from the company’s supply-side links with the military and other governmental clients, not least its FlexACM solution for NATO’s ‘morale, welfare and recreation’ (MWR) applications. Extremely active in Afghanistan and throughout the Middle East, Newtec supplies to Stellar Group to help link up to 40,000 military personnel with their homes and families and supplying voice and data links in what can be extremely hostile environments. The ‘hostility’ can come from enemy action, of course, but it also comes from the environment where heavy weather, dust, sunshine and monsoon-type rain can all impact the equipment. FlexACM allows for maximising the bandwidth available whilst also optimising link availability and reliability while at the same time keeping control over operating expenses. Stellar Group supplies 200Mb/s into its base in Afghanistan, for example, and manages to squeeze an extra 30 percent of throughput into that existing capacity. 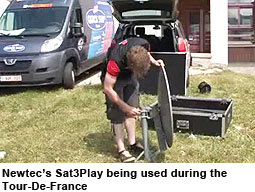 Newtec has had similar success using these MWR solutions for oil rig workers based hundreds of miles away from homes. Indeed, the same core technology was also used for an installation in Antarctica, where again the extreme weather (and low satellite elevation) provided the challenges. Hardly ever talked about is the use of Newtec’s FlexACM on unmanned aerial ‘drones’ used by the military and which need sophisticated satellite links from their sometimes extremely remote controllers. These applications have both benign as well as military uses. The benign aspects come in the forms of disaster surveillance, emergency response, search and rescue, environmental monitoring, convoy protection and maritime surveillance generally, as well as border control. Newtec’s modulation and demodulation boards for these needs are made in a lightweight but robust form thereby helping extend a drone’s mission.

Newtec is expanding rapidly and now has full overseas offices as far afield as Sao Paulo, Dubai, Singapore, Hong Kong and Beijing. Van Herck sums up Newtec’s basic strategy: “Our core belief is to help our customers and partners to succeed through innovation and cutting-edge technology.”

About the author
Chris Forrester is a well-known broadcasting journalist and industry consultant and has been reporting on the “broadband explosion” for more than 25 years. Since 1988, Chris has also been a freelance journalist who specializes in content, the business of television, and emerging applications on all delivery platforms. He founded Rapid TV News and also files for Advanced-Television.com. In November 1998 he was appointed an Associate (professor) of the prestigious Adham Center for Television Journalism.