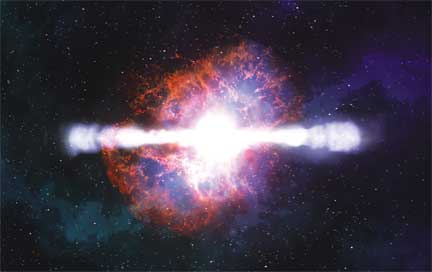 Since the advent of satellite broadcasting, cost-effective operations and consistent, high-quality, viewer experience have continued to be the main priorities for content owners and producers. Technical advances including state-of-the-art video delivery products and signal transmission products continue to play a significant role in the improvement, evolution, and future of satellite broadcasting.

Early on, for example, the SENCORE engineering team helped one of the first DTH networks in the United States launch its new digital transmission platform. This was accomplished though collaborative efforts to build a modulator that could use a semiconductor manufacturer’s proprietary forward-error correction. As a direct result of this collaboration, today a large number of DTH network signals in the United States are modulated by these types of devices. 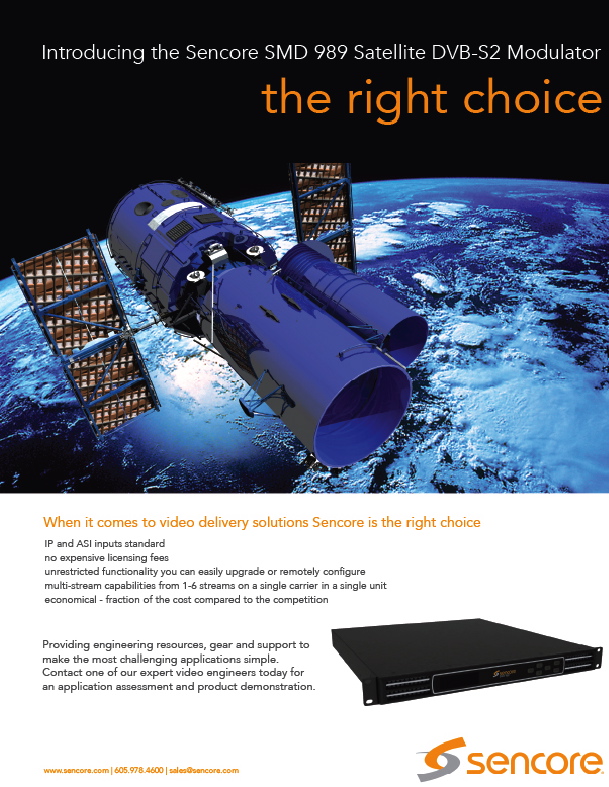 From contribution to distribution, satellite technology has and will continue to play a vital role in the delivery of video from the point of origin to the home. Figure 1 shows a simplified video distribution chain with satellite as the carriage medium throughout. As video nears the home, there are more options for transmission including IPTV and cable, but satellite can be deployed without the need to bury cable, making it extremely attractive in emerging countries.

As the satellite industry has developed and new standards including DVB-S2 have emerged, it is increasingly true that spec by spec, pieces of gear in the video delivery chain seem equal. This should not come as a surprise. After all, the providers are all meeting the same standards. If you won’t find key differentiators among devices in the fine print, where are they to be found? Most often, the difference is between products that work as advertised in real-world applications, and those that do not.

The Key Differentiator
Logically, the next question becomes: What determines what works? Because the video delivery chain has become so complex, most often the devices that work are those that have sufficient built-in versatility to enable them to work well with others. Because any product can be designed to simply “meet” a specification, it is experience and expertise within the entire broadcast chain that are the major differentiators between different test and measurement products today. 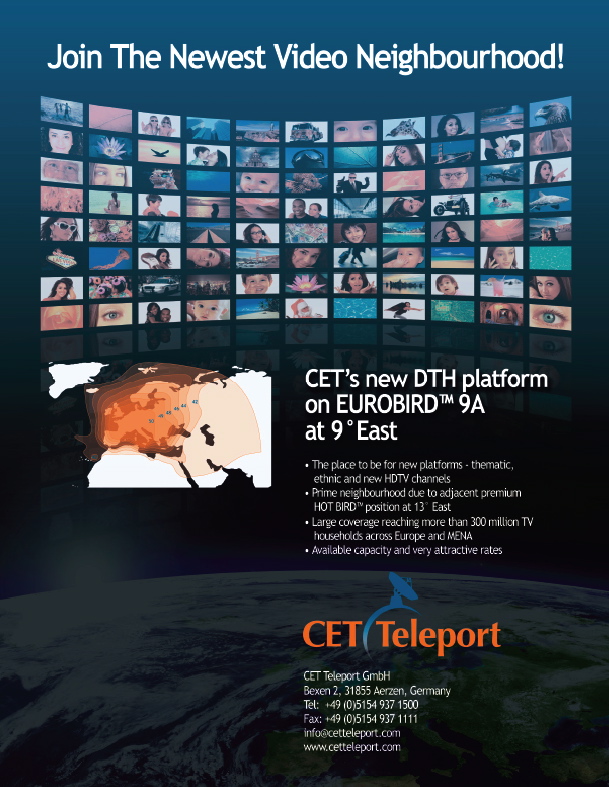 Complexity in video delivery is principally the result of two things. First is the wide variety of satellite applications, each with a different signal chain whose links are products made by different vendors. Second is the inherent flexibility within the standards. Ideally, products such as receiver/decoders and modulators should be capable of performing in multiple places in the video delivery chain.

Recognizing the need for versatility, SENCORE was among the first companies to offer a receiver decoder built on a modulator platform with configurable inputs, outputs, and decoder options to suit users’ individual needs.

The customer is empowered by offering options such as the latest modulator for DVB-S2, the SMD 989, which brings into play dual-bay versatility. This means the user can populate each bay with a modulator and/or demodulator. This flexibility allows the customer to use the platform as a space-saving, high-density modulator. In fact, when compared with traditional devices, the SMD 989 DVB-S2 Modulator cuts space requirements in half. Such is especially desirable for DTH applications that require many channels and thus modulators at the head-end, putting space at a premium.

A further advantage of this device is the flexibility to house a modulator and demodulator within a single chassis, essentially performing monitoring and verification of the signal that is being transmitted from the satellite. Given that satellite providers pay for bandwidth by unit of time, they do not want to spend time on setup and verification. The SMD 989’s design affords the ability to verify and validate the signal in real time.

Interoperability Is Crucial
Interoperability — in other words, a device’s ability to perform in multiple use cases with myriad other equipment — has become even more critical with the increase of HD adoption. The size and detail of HD content requires the use of H.264 AVC compression over carriage mediums, including IPTV over ADSL and DTH satellite delivery.

Decompressing H.264 AVC is, itself, more demanding than decompressing predecessor standards such as MPEG-2. In addition, the H.264 AVC standard has new options within it, including new block sizes, as well as expanded profiles and levels to enable increased compression efficiency.

The consequence of encoder manufacturers having so much flexibility is an increased burden on the receiver decoder. Likewise, HD encoding requires higher bit-rate streams. This has prompted the move to the DVB-S2 standard for carriage over satellite in order to minimize use of transponder

If clean interoperability is the key to successful video delivery via satellite, then — to borrow an apt cliché — the chain of equipment is only as strong as its weakest link.

SENCORE engineers have experienced many years of real-life use cases in a wide variety of applications. They know what can go wrong theoretically, what has gone wrong in actuality, and the corrective response has to build in effective solutions. This has made SENCORE products exceptionally reliable, a fact that’s attested to by the company’s reputation in the industry. Due to the complexity of the video delivery system, it takes years of real-world testing to deliver a useful piece of gear with the off-the-shelf reliability found in our devices.

In addition, as SENCORE has multiple operational products for satellite video delivery, the company is familiar with the handshake points among products and is able to make those that work seamlessly within the signal-flow — even when that includes legacy devices.

For example, the 3000 series receiver decoders are versatile enough to operate over a wide variety of parameters, including DVB-S and low symbol rate applications. At the same time, the receivers can demodulate any DVB-S2 modulation scheme, including 16-APSK and 32 APSK, and can also support multi-stream ISI applications. The 3000 series receiver decoders enable the customer to do whatever is needed with one box, for today’s and tomorrow’s use cases.

A good example of SENCORE gear interoperating within the signal delivery chain is CBS’s deployment of the company’s MRD3187B on Super Bowl weekend that occurred earlier this year. During the broadcast, CBS paired the SENCORE receiver decoder with a high-performance encoder from another vendor for low-delay ancillary news coverage. Together, the two devices provided MPEG-4 AVC compressed live HD feeds for CBS’s Weekend News program from Sun Life Stadium in Miami to the CBS studios in New York.

Interoperability is so important to the industry that the International Satellite Operations Group (ISOG), a subcommittee of the World Broadcasting Union (WBU), sponsors independent interoperability testing. The latest round took place in June 2009 and was focused on MPEG-4 AVC (H.264) contribution and 1080i/720p codec interoperability. SENCORE submitted the MRD3187B receiver-decoder for testing, and it finished in the top three in each category tested, including...

Rather than focus exclusively on listed specifications, WBU-ISOG tests focused on interoperability and real-world system performance across many equally important parameters. Consider the complex relationship between latency and lip-sync, which are significant challenges in HD systems. A lower-latency system is especially useful in field-to-studio interviews where the delay between the conversations can be annoying to the viewer. An encoder or receiver-decoder that offers best-in-class latency is of no use to an operator if it lacks in lip sync; the system delay may be reduced, but the trade-off could be audio leading video.

The Growing HD Push
As an early entrant in the satellite industry, SENCORE has a uniquely broad and knowledge-backed perspective on its trajectory, recognizing, for example, that the trend will always be to pack more data into less time and less bandwidth. Consumer demand for HD is one significant driver for this trend. HD is already seeing wide use in Western Europe and North America, with more limited adoption in Asia, South America and Eastern Europe. In emerging economies, use is still limited — but everywhere there is room for growth, particularly as viewers’ expectations increase. SENCORE was one of the first providers of modulators to carry HD content as well as one of the first providers of HD receiver decoders. We continue to stay ahead of the curve by building in support for up-and-coming formats, signals, compression strategies, and codecs — even before they are widely adopted.

Market forces notwithstanding, DVB-S2 is approaching the Shannon Limit — the physical limit — of how densely bits can be packed and then resolved by a demodulator after a noisy trip to and from the satellite. Even before physical limitations are pushed, there are industry challenges to HD transmission, including the high cost of investment and of operation. HD transmission is expensive — necessitating more power consumption by more expensive, large, and hard-to-site satellite dishes.

The tradeoff is that it also requires higher transmit power and higher gain-receive antennas to accommodate the link budget necessary for the C/N constellation to be resolved at the receiver. Of course, 16APSK modulation is also much less forgiving of the system’s non-linearities, and as a result, the higher power comes with its own limitations.

Whereas Western Europe and North America have functional legacy infrastructure that has to be replaced to accommodate advancements in technology, countries in Eastern Europe and elsewhere in the world may be building digital television infrastructure from scratch — skipping the limitations of yesterday’s technology and embracing the advantages of tomorrow’s.

In fact, worldwide equipment demand for DVB-S2/MPEG-4 is expected to grow nearly 40 percent over each of the next two years. India is one of the world’s largest and most powerful emerging markets, and its Telecom Regulator Authority of India (TRAI) has recommended the use of DVB-S2 and MPEG-4, even for broadcasting SD video. The Indian DTH market is one the fastest growing satellite markets in the world, expected to quadruple from about 5 million today to 20 million in 2012 — any manufacturer targeting the global market needs to be sure it is providing versatile products that are compatible with legacy systems while they also include advanced features.

Meanwhile, the European market presents a unique opportunity for providers of operational video distribution gear because it is more fragmented than the North American market, and more of its contribution and primary distribution is carried via satellite. Because of that fragmentation, and because European providers rely on the open DVB-CI standard for encryption, satellite becomes the ideal solution for delivering content to many head ends and even terrestrial broadcast stations. DVB-S2’s multi-stream capability is very useful in implementing single frequency networks for DVB-T terrestrial distribution. 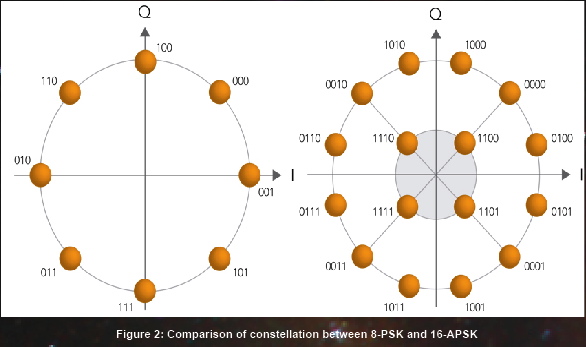 SENCORE’s IRD 3000 series of receiver decoders are particularly useful for content providers who are receiving an SD signal today but are anticipating HD roll-out in the future. They were designed to fit cost-effectively into existing SD infrastructure and are capable of decoding SD and HD video, and outputting SD. The IRD 3000 series also offers facilities a cost-effective, field upgradable path to output HD for future HD offerings to their customers. 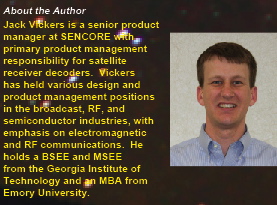 Since 1951, SENCORE has specialized in all manner of technologies for processing and distributing video signals and video systems. The company’s longevity affords not only unique knowledge but a unique perspective on a dynamic industry. Our company’s most significant contribution to the industry as a whole is the ongoing development of time-tested, cost-effective products that are versatile enough to suit the many complexities of the video delivery chain, and technologically advanced for long-term usefulness. 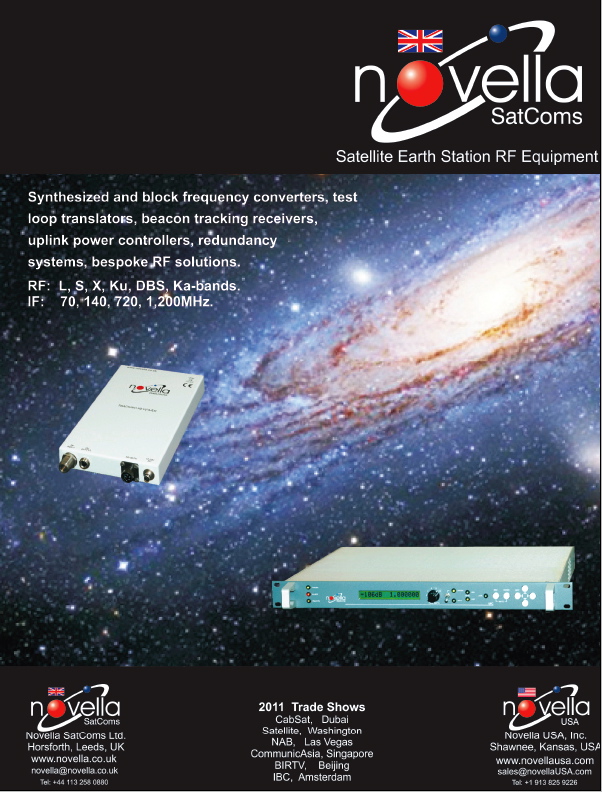