The global space industry is undergoing rapid change. No less than 300 new companies are investing in new spacecraft and launch systems for more cost-effective access to space with greater frequency. 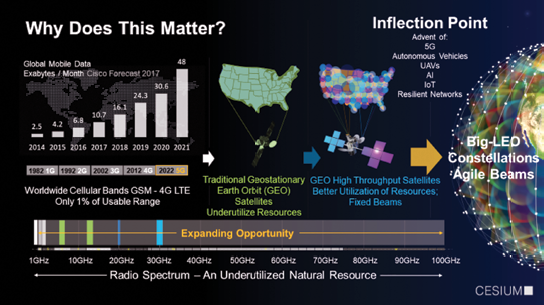 Figure 1. Markets are shifting from large platforms to smaller, distributed platforms and higher throughput systems. Image is courtesy of CesiumAstro.

Over the past half-dozen years, several traditional large, geostationary, telecommunication satellites have been replaced by high-throughput (LEO and GEO) versions that are drastically disrupting the market. Today, the demand for large GEO commercial satellites has declined from a steady 25 to 30 satellites a year to five to seven per year.

Embracing this shift, a new generation of operators and satellite system manufacturers are re-tooling their infrastructure to better align to this changing market. General John Hyten, United States Air Force (USAF), head of STRATCOM, and now nominated to be Vice Chairman of the Joint Chiefs of Staff, highlighted these strategies in the new ‘space enterprise vision’ recently adopted by the USAF and National Reconnaissance Office (NRO)...

“In that vision you won’t find any of those big, exquisite, long-term satellites,” stated General Hyten. “With regard to military satellites, STRATCOM will advocate for a change away from “exquisite” costly systems that take years to develop in favor of “more resilient, more distributed capabilities.” 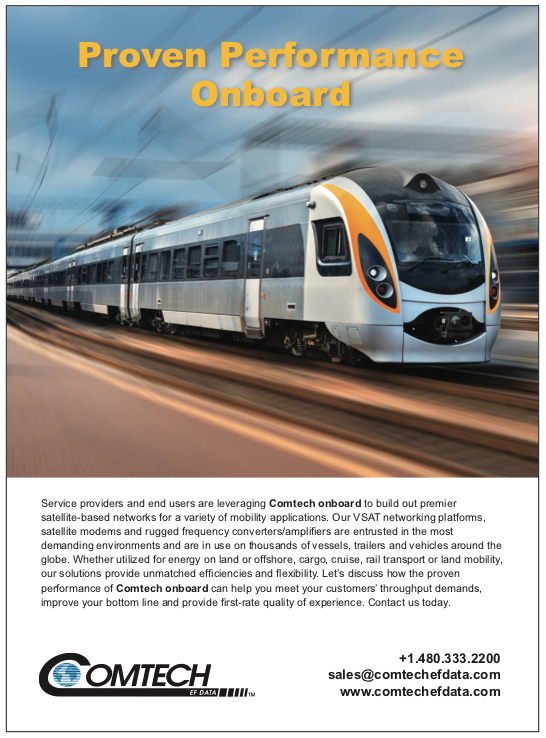 An important parallel shift is in the deployment of proposed commercial and military constellations, aircraft connectivity solutions, and advanced weapon and C3ISR systems. These systems now require rapid insertion of Commercial-Off-The-Shelf (COTS) part solutions that have been adapted from disruptive developments in adjacent markets, rather than relying on “traditional” mil-qualified parts.

Within a decade, one or more large Low Earth Orbit (LEO) constellations of smaller satellites will be fully deployed, each likely numbering in the thousands. These will enable unprecedented services, including highly distributed, interconnected and resilient systems to improve our personal and business security, decentralized remote imaging for enhanced environmental and agricultural monitoring, and a full connection of the plethora of mobile devices that are woven into the fabric of our lives and enterprises.

High-end smartphone and tablet markets require electronics that run sophisticated operating systems and radio platforms drawing on minimal battery usage. Many of the companies who have invested in those technologies are now pushing into driverless and driver-assisted automotive platforms, adding safety and reliability requirements.

CesiumAstro is an Austin, Texas, startup that was developed on the back of a market strategy to leverage the intersection of all three of those markets. Many system integrators choose not to invest resources into fully custom, fixed beam payloads, creating a market for “out-of-the-box” solutions such as CesiumAstro’s Nightingale series products.

At the same time, the new push for advanced automotive electronics provides a source of highly-capable and highly-reliable components that are well-suited to this next generation LEO space market. Now, reliability advancements have progressed to aerospace requirements, and LEO and low-MEO satellites are a particularly attractive application, as the strict reliability requirements are balanced by relatively low radiation levels. Therefore, CesiumAstro is in a unique position to leverage its existing COTS-based, miniaturized telecommunication and advanced avionic products for LEO constellations and other new aerospace applications.

To create a high-speed communications link, all that is required is a single power cable and a digital connection. (See Figure 2) 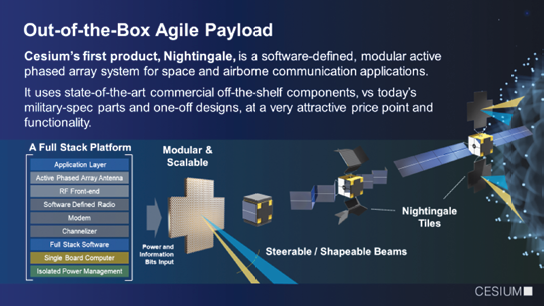 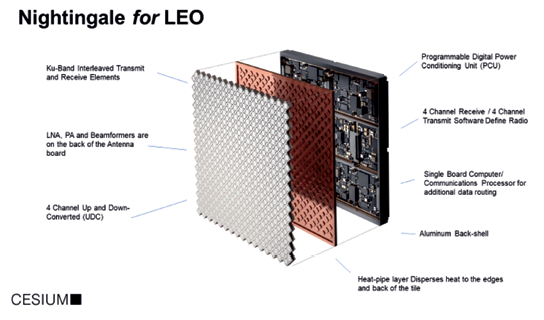 Nightingale for Commercial LEOs
Cesium’s first product, Nightingale, is a complete plug-and-play, active-phased-array communication system in a thin tile — a key enabler for satellite integrators, data providers, and the military. The module combines a cutting-edge software-defined radio (SDR) with an ultra-wideband, multi-beam phased array antenna, offering a wide choice of communication parameters and dynamic reconfiguration of the system.

A fundamental challenge with this fixed pattern approach however is that, for highly dynamic, maneuvering spacecraft systems, the requirements tend to favor isoflux, omni or mechanically steered reflector antennas leading to inefficient distributions of bandwidth and power using uniform, fixed, wide beams.

These fixed beam/fixed waveguide systems are often custom designed solutions for each type of spacecraft and each mission.

This payload architecture maximizes the bandwidth and power that is delivered to users.

• Capability to shape Earth coverage areas through phase and amplitude control for each beam at each radiating element. This allows for dynamic optimization of gain pattern for each beam.
• Ability to re-allocate available RF output power among beams. This allows for increase of power in high-demand footprints or in applications that have higher priority.
• Distribution of solid-state power amplifiers (SSPA) and low now noise amplifiers (LNAs) over hundreds of elements. This leads to higher reliability, as the failure of individual amplifiers has minimal effect on overall array performance.

• Multiple transmit and receive beams from the same aperture. This reduces the overall aperture size for a given number of beams. Carrier frequency of each beam can be set independently.
• Interleaved transmit and receive antenna elements. This allows reduction in either number of components (when using TDD) or aperture size (when using FDD).
• A “reliable-COTS” part-selection approach, combining automotive-grade parts with design-for-reliability. This results in a flight-reliable system with state-of-the-art components at below-space-grade cost.
• Fully modular architecture. The antenna elements and RF electronics are designed in ‘tiles,’ while the processors and power control units are line-replaceable modules. This approach leads to a scalable system and lower generation-to-generation development cost. 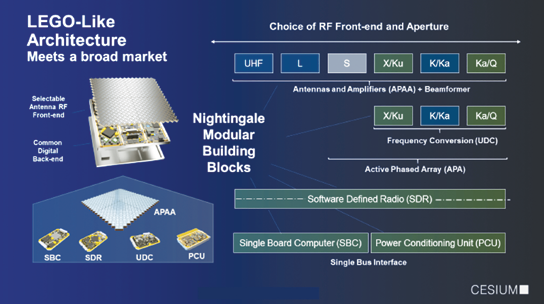 Figure 4: Cesium’s LEGO-like architecture serves a broad and expanding market both in commercial and DoD. 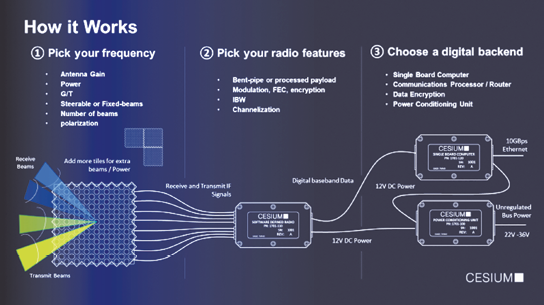 Nightingale also offers an order-of-magnitude lower market cost. Because CesiumAstro has designed Nightingale as a modular system, they can provide customers an end-to-end solution in months, not years. As they are platform-agnostic, Cesium products are also easily adapted to multiple aerospace applications.

Another element of Cesium’s paradigm shift is their provision of a complete plug-and-play system directly to system designers, replacing a major R&D effort with a single product that works directly out of the box — eliminating the need for customers to employ dedicated staff to develop their own communications systems.

How Does Nightingale Work?
Customers tell CesiumAstro what kind of mission they have in mind, what frequency of operation they prefer and what features they need in their telecommunication systems — and Cesium addresses their needs from those starting points.

The company designs the end-to-end systems,starting from the link budget, to hardware and software directly down to the last digital and power connection needed for a customer’s system.

Over the past 18 months, Cesium has been working with NASA Ames, the Defense Advanced Research Projects Agency (DARPA), the Missile Defense Agency (MDA) and U.S. Navy on customized communications systems.

In March, the company closed a $12.4 million investment, led by Airbus Ventures, and with Kleiner Perkins, Franklin Venture Partners, Lavrock Ventures, Honeywell Ventures, and Analog Devices Ventures. These investments provide the means to scale the team and expand the development of a wide range of frequency offerings and system configurations to meet the growing demand for affordable, high-throughput aerospace plug-and-play communications systems.

Governments and global space agencies have issued a call to commercial companies to partner on major systems. They recognize that commercial companies and especially entrepreneurs such as CesiumAstro’s team are delivering innovative technologies and new business models — and that the COTS approach lowers cost and risk, yet increases the speed to complete a mission.
www.cesiumastro.com

Shey Sabripour founded CesiumAstro in January 2017 and serves as CEO. He has nearly three decades of leadership success in design, development and execution of LEO and GEO telecommunication satellites, launch vehicles, and other interplanetary space vehicles.

During his 24 years of continuous career service with Lockheed Martin Space Systems, Shey led work as a design engineer, technology innovator, program manager and ultimately, the Director of Spacecraft Design responsible for an organization of 370 engineers, scientists, and business professionals in missions ranging from $100 million to $1 billion.