Occasional-use (OU) satellite transmissions and temporary feeder links are particularly impacted, as compared with full time DTH services where the owners and locations of the uplinks are well known and can be identified by the respective signalization (DVB-SI) data included in the MPEG- TS stream.

While temporary link errors and interference can come from many sources, satellite operators have confirmed that a significant amount of interference comes from so-called “rogue pirate carriers.” This unintentional interference is often caused by failed equipment or by systems improperly designed and/or configured due to human error.

Various actions are being taken by operators, customers, vendors and industry groups to tackle interference, including: training for installers and operators; data sharing to improve operational processes; and new innovations such as Carrier Identification (CID) which has been introduced by DVB and defined in the reference DVB-CID1 ETSI 103 129, and validated in 2013. 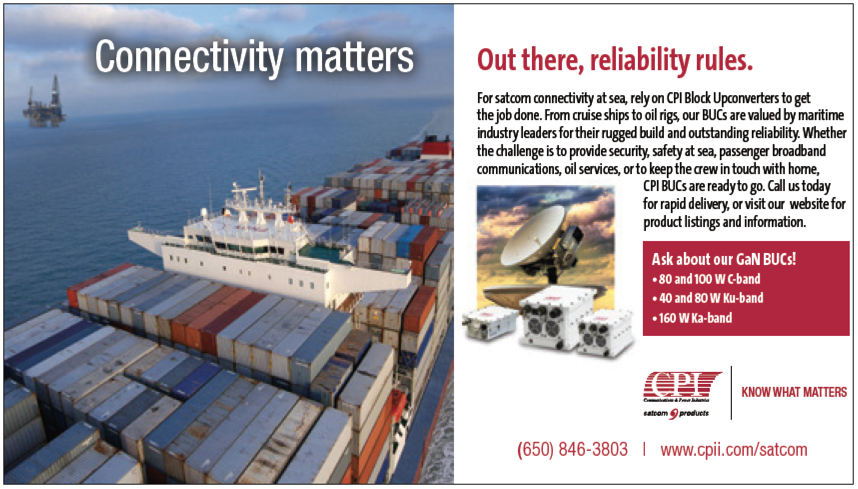 The Carrier ID implementation is done at different levels:
At the physical level, inside the satellite modulator. Currently, most of the modulators available on the market support Carrier ID insertion; however, most of time this means a hardware upgrade is required, especially for older devices. TeamCast introduced this feature three years ago in their modulator—VYPER.

At the system level, where all Carrier ID must be identified in a big database shared between all satellite operators. Presently, the Space Data Association (SDA) is in charge of managing this database. TeamCast introduced a CID Receiver during the recent Washington DC trade show to facilitate DVB-CID reading. 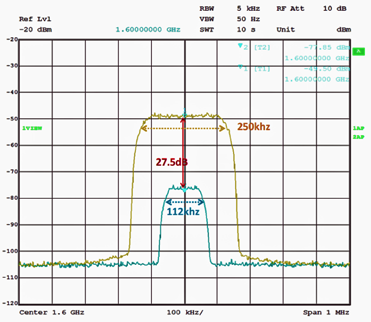 With 20 years’ experience in digital modulation techniques for the transmission world; it is with pleasure that TeamCast shares with you its vision of the markets and the technologies associated with the evolution/revolution required by the satellite environment.

There are a variety of causes of satellite interference:

• For the majority of cases, interference is due to human and technical errors, which can be explained by the increasing number of satellites and users sharing a limited spectrum resource
• Poor quality, aging (DVB-S started 25 years ago) systems which generate frequency shifts; or poor spectrum quality, plus cabling faults (e.g., FM radio can be picked up at 70/140MHz), and other unwanted contributions
• Intentional/unintentional transmission interference which is now becoming more and more important

When interference occurs, various actions can be taken:

However, there is still something missing: an element that is similar to “watermarking” for each satellite carrier. This is the goal of the ETSI standard: DVB-CID, which is called “Carrier ID.”

Carrier ID is used to identify the signal broadcasted via a transponder, a “watermark” on every carrier in a transponder. The basic idea is to highlight the owner of the RF signal so that to ensure that he/she respects the contract with the satellite operator who has provided a specified bandwidth within a determined schedule.

The technical process implemented is an old one: spread spectrum technology as used historically for military transmission applications. Why? Because it is a extremely robust modulation: even with a C/N at -10dB, the useful modulated signal can still be extracted. The DVB-CID standard describes the implementation, and at the output of a modulator the following spectrum can be visible:

The Carrier ID signal added to the useful signal is set at -27.5dB to this useful signal power level, with a bandwidth either at 112KHz when the Symbol Rate 250khz is less than 0.5MBaud, or 224KHz. The impact on the budget link is given, in 27.5dB the standard, as 0.27dB maximum.

NB: In North America, the Federal Communications Commission (FCC) mandated the use of Carrier ID by September of 2017.

Technologies
Two technologies are proposed to generate a Carrier Identifier at the modulator level:

NIT Carrier ID at the MPEG transport stream (TS) level where the NIT (Network Information Table), as defined in the MPEG standard, is used to identify the emission point of the RF signal. This information may be added at the encoder or the modulator. As mentioned previously, this process is already in use for DTH transmission.

DVB (RF) Carrier ID at the RF level, where a very small RF signal is added—without significant impact to the global budget link—to the useful RF signal (either in DVB-S/S2/S2X), to broadcast the information of the emission point of the RF signal. The DVB Carrier ID process is done at the modulator where the CID is added to each carrier.

Figure 3 depicts a configuration using NIT CID: two modulators are broadcasting at the same time, on the same frequency, on the same transponder, with two different content streams.

In this case, no IRD (integrated receiver/decoder) can demodulate the signals because each RF signal is an interfering noise signal to the other. That means the MPEG-TS content cannot be recovered, the NIT information is lost and the Carrier ID cannot be extracted. Therefore, it is impossible to identify who is broadcasting at the same time just by analyzing the RF signal on the transponder.

Using the DVB Carrier ID (Figure 4), however, the identifier of each carrier is included in a very small and robust RF signal added to the useful RF signal.

A dedicated demodulator of this additional very small RF signal can extract the Carrier information, even if the useful DVB-S, DVB-S2 or DVB-S2X signal cannot be demodulated. This process can be integrated into the monitoring system of satellite operators in parallel to the existing system.

Generation at the modulator/encoder site
The NIT Carrier ID uses the PSI/SI DVB standard that allows adding extra information to the MPEG-TS content: e.g. encoder details and the GPS position of the modulator which broadcasts the content as RF signal. The Carrier ID information table should be located in descriptor tag 196 (0xC4) of the NIT table. This new descriptor is added by table-inject to the original NIT.

Generation at the modulator/encoder site
For the DVB Carrier ID, there is a small BPSK (binary phase-shift keying) spread spectrum RF signal generated and superimposed on the main carrier by the modulator. There is no effect on the useful signal. The standard allows up to 0.28dB degradation of the C/N margin; typically it is less than 0.1dB.

Monitoring at the receiver site
For the DVB Carrier ID, a dedicated RF demodulator is required, as depicted in Figure 4. Until now, only some satellite operators have upgraded their monitoring solution to support the DVB carrier ID by adding a Carrier ID receiver in parallel to the DVB-S/S2/S2X demodulator. Even if the DVB- S/S2/S2X signal cannot be demodulated, the DVB Carrier ID can always be extracted.

However, before extracting the DVB-CID signal in a noisy environment, best practice dictates that the first check should be to verify that each Satellite carrier is well identified by its Carrier ID signal. This is the initial goal also of the CID receiver designed by TeamCast. 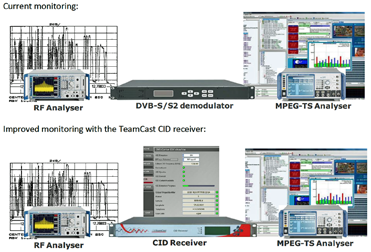 What Is A CID Receiver?
The CID Receiver is used to check each carrier to ensure the DVB-CID signal is present and can be analyzed. TeamCast’s new CID Receiver system is the first stand-alone commercial solution to extract the Carrier ID (CID) from DVB-S/S2 satellite signals.

DVB-CID implementation: CID receiver verifies that a modulator adheres to the DVB-CID standard.

DVB-CID monitoring: CID Receiver scans all carriers to check the presence or absence of a DVB-CID signal. In case the CID signal is present it extracts the DVB-CID value to ensure that it is the correct modulator which generated the analyzed carrier. The CID Receiver supports SNMP (Simple Network Management Protocol), and can therefore be used for “preventive” maintenance.

With the TeamCast solution, it is possible to replace an existing DVB-S/S2 demodulator with the CID Receiver and benefit—besides the DVB-CID extraction—from the state-of-art DVB-S/S2 demodulator (including the DVB-S2X low roll-off management), with high accuracy probes.

TeamCast CID Receivers can work either in stand-alone mode or integrated within a global monitoring system using SNMP. After locking onto a DVB-S or DVB-S2 signal (even if the MPEG-TS output has failed), the DVB-CID information can be extracted. The TeamCast stand-alone CID Receiver checks via SNMP if the Carrier ID is included in each satellite broadcast signal, verifying that the CID is compliant and that the received signal has been generated by the correct modulator. 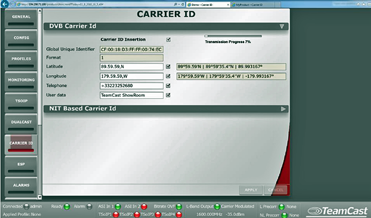 Figure 5. DVB Carrier ID GUI on the modulator side

This is, therefore, the easiest way (in terms of time-to-market and cost-efficiency) to be compliant with the new FCC requirements regarding DVB-CID in 2017. In summary, the TeamCast CID Receiver is a versatile tool:

• To detect which carrier is not DVB-CID compliant
• To create your own database by identifying each modulator used
• To survey the redundancy situation: a modulator switching means a Carrier ID modification
• To be used as a double check with an NMS (network management system).

As of this writing, DVB-CID is not mandatory, so the user can decide whether to initiate the process at the modulator or not. With reference to Figure 5, the Global Unique Identifier (GUI) is a read-only parameter derived from the Ethernet MAC address of the modulator. The other parameters are optional. Depending on the market evolution of the DVB-CID requirements, the modulator could also offer the possibility to embed a GPS function or to be connected to an external GPS device, to automatically feed the Latitude and Longitude field information.

For reception, with the CID Receiver, the DVB-CID can be extracted and also the user can check easily if his/her satellite carrier signal conforms adequately to the DVB-CID requirements (see Figure 6): 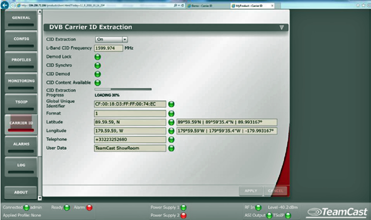 Figure 6. DVB Carrier ID GUI on the receiver side

Carrier ID is not expected to be a perfect solution to solve all satellite signal interference problems, but it will be a key technology in contributing to the rapid identification of interference and reducing their negative impact on operators, customers, and the satellite industry as a whole. Carrier ID will enable the operators and users to:

Quickly identify interfering carriers and initiate a response to those interferences, thus reducing the duration of such events.

Improve Quality of Service and lower the number of interference events and release bandwidth being used to overcome current and ongoing events, in the long term.

TeamCast has been a long-time partner in the DVB standards committees, and is also a member of the Satellite Interference Reduction Group. The company has developed state-of-the art modulators following the DVB-S/S2/S2X standard (Vyper and Tyger, as well as OEM modules), and has recently released the cutting-edge stand-alone CID receiver, which can extract the Carrier ID information.

TeamCast is an active member of the global Digital TV ecosystem worldwide, with innovative technology offerings based on solid expertise in Satellite and Terrestrial Digital TV transmission.

Created in 2003, and based at Rennes in France, TeamCast is deeply involved in the development, definition and verification of numerous broadcasting standards including DVB-S2X.

TeamCast is a vital member of the Satellite Interference Reduction Group (SiRG: www.satirg.org) and actively participated to the Carrier ID (DVB-CID) contribution in this group as well as in various key industry events.

References
1DVB is a registered trademark of the DVB Project
2Source: EUTELSAT