For the past several decades, maritime communications have been dominated by the L-band satellite frequency. When conceived, L-band provided a very good channel for reaching ships and freighters traveling deep ocean routes. To consider any of the other terrestrial bands would involve outfitting ships with large, costly antennas that only oil and gas freighters could reasonably afford. So over time L-band grew to become the de-facto industry standard, covering nearly 90 percent of all vessels sailing the seas. However, with the march of time, new opportunities presented themselves that challenged L-band’s status quo. Chief among them were new advances in antenna technology that modularized on-board receptors for IP switching and automatic re-pointing. This perfectly fed into recent industry changes that expanded the availability of the much more extensive Ku-band over the Pacific and Atlantic Oceans. Taken together, satellite providers could now offer maritime companies global broadband service via a VSAT network, a considerable quantum leap in the field of maritime communications. 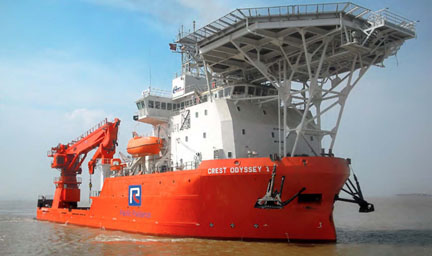 Under the L-band model, communications were always severely impacted by a very limited bandwidth channel. Transfer rates clock in around 64-128kbps on a good day without high-traffic congestion. Only small electronic files (typically a max of 1 Mbps) can be sent over such a limited pipeline, and transmissions are usually limited to twice a day. The majority of these communications end up being text-based, stripping out many of the bells and whistles found in the applications and email systems being employed onshore. To cope with this technical disparity, vessels create their own native applications, most of which are offline from the main corporate network. Maritime CIOs have to manage two completely separate onshore/offshore IT environments and reconcile any data that is housed within those offline applications. What CIOs are essentially dealing with is a communications system that is failing in its primary goal of communicating.

These technical limits are a relativity new challenge for L-band users considering that the model employs a pay-per-use framework that no longer makes economic sense. The usage model behind L-band dictates that subscribers pay according to the bandwidth they consume. Thirty years ago when a few Mbps of data were comparable to a few Gbps, this wouldn’t have been so much of a problem, but needs evolve and now L-band systems are ill-equipped to handle today’s data intensive business applications. A typical merchant shipping fleet demands speeds in excess of 512kbps and gigabytes of data transmissions per month. Operating costs would immediately spiral out of control if fleet owners were dealing with those requirements under an L-band usage model. The only remedies available would be to limit the monthly bandwidth usage to under 100 Mbps or to limit usage to low-end applications; either option debilitates much of the potential benefits provided by satellite communications. Without the capacity to match bandwidth to future applications use, the L-band model has become a technical dead end for the modern maritime industry. 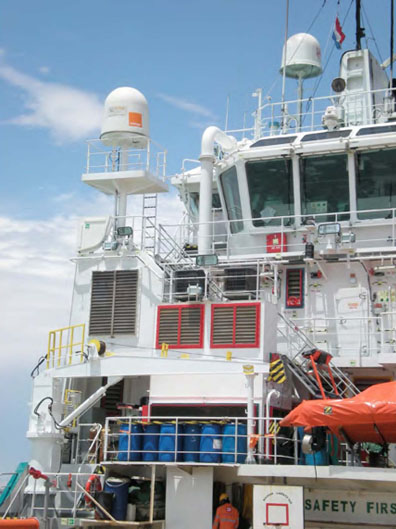 The VSAT Alternative
VSAT on the other hand opens up a limitless world of possibilities that up to this point were unattainable under L-band. At the pricing level, these wider broadband pipes operate at a flat-fee so maritime companies are not penalized for the amount of bandwidth they consume on a monthly basis. Beyond communications speed, VSAT allows the introduction of more mainstream communication applications such as Microsoft Exchange or Lotus Notes, along with a full gamut of IP services such as VoIP, security, WAN optimization, call centers and video conferencing. These types of services are appealing to maritime companies because they bring ships within the domain of the larger corporate network regardless of where they are at sea. The same corporate applications an employee can access in a terrestrial office, a crew member can access at sea. It is as if the ship is a floating office and enjoys all the amenities of a terrestrial site.

Here are several examples of how VSAT-backed applications transform the way maritime business is conducted:

Vessel Repairs — A vessel that is temporarily in port for maintenance can cost a company $25,000-$100,000 a day. Thanks to a broadband satellite connection, experts on shore can monitor ship equipment in real-time while the vessel is still at sea. Any technical problems can be addressed via remote IT access or though voice and video discussions with a specialist on shore. The same goes for virus updates or software upgrades via the network, eliminating the need to do so through CD-ROMs or having a dedicated IT person onsite. Real-time maintenance through the network extends vessel life, enables the crew to focus on more important tasks, and saves the company in revenue lost for vessels that are out-of-service.

Enhanced Navigation — A VSAT network can deliver real-time, accurate data on weather conditions so that vessels can navigate around any potential trouble spot. It can also map out more efficient routes to speed vessels to their destinations. Both applications can lower fuel costs and reduce delays.

Crew Retention — Maritime companies constantly deal with the issue of crew attrition due to the long spans of time that are spent at sea. A reliable satellite connection offering voice, emails, video, social media and Internet can ensure that crew members enjoy all of the amenities of home or work and are able to reliably communicate with family or loved ones. Crew morale will be higher and maritime companies can afford to keep their ships longer at sea. Another added benefit is the ability to conduct telemedicine or video training at sea without having to necessitate time off. 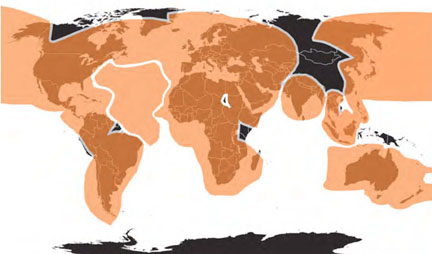 Supply Monitoring — A VSAT satellite connection opens a ship up for real–time monitoring and analysis. Data relating to the supply of cans in a soda machine to the median temperature level for the cargo hold can be tracked and adjusted. It solves the delays and human errors made by data entry under the L-band model.

Real World Applications Of VSAT Broadband
Today, many maritime companies are considering VSAT as a possible replacement to L-band systems. According to figures from Northern Sky Research, satellite broadband has the potential to become a $7.6 billion market by 2018.

One company that made the jump is Crest Subsea Pte, a relatively new company that is part of the Pacific Radiance Group of companies based in Singapore. Crest provides offshore support vessels and integrated marine solutions for oil and gas, engineering contracts and related services support industries. To gain a competitive advantage over entrenched incumbents, it turned to Orange Business Services to implement a VSAT satellite solution that was specifically tailored for marine logistics. The solution Orange delivered connects Crest’s outgoing and incoming vessels to its corporate network, giving each ship access to the company’s business applications while enabling the home office to monitor ship status and the use of consumables.

Crest’s VSAT satellite solution also added a homogeneous IP telephony solution, based on Orange’s Business Talk Global service. Here the conventional PABX is replaced by a central IP-PBX, delivering all the benefits associated with unified messaging systems, including number portability, click to call, operational guarantees with its back-up system, flexible billing (consolidated, by site) and a report generation system. The IP telephony component operates on a monthly subscription contract while outside calls are covered by an IP pricing rate that is eight times cheaper than a traditional L-band communication solution.

Thanks to the voice, email and chat functionality of the solution, Crest crew members can instantly stay in touch with friends and family. This functionality appealed greatly to Crest who face a growing workforce that will double over the next two years and who could use these added network amenities as a recruiting tool for prospects.

In addition to Crest, Orange Business Service has also conducted work with a major offshore company to modernize its fleet of 150 vessels with a VSAT broadband communications network. The new system can now transmit a wide range of electronic data, from a single VoIP call to a real-time prognosis of vessels. It has reduced communications costs by 80 percent, eliminating the variable pricing that was once connected to its consumption of bandwidth. This all translates to an estimated savings of several million euros over the next three years.

The ability to offer unlimited phone, email and online chat services to off-duty crew members was another major attraction for this company. Similar to Crest, it expects to double its workforce over the next four years and access to personal communications has become a critical tool for boosting employee morale and reducing turnover among staff having to work in remote locations.

VSAT plays such an important role that all new vessels commissioned by the company now come equipped from the shipyard with a VSAT antenna, an iDirect router, Cisco switches and VoIP.

Whether you are a start-up like Crest or a recognized industry leader, VSAT’s benefits are applicable to you.

L-band Will Stick Around
Despite the tell-tale signs, L-band’s eventual decline is not necessarily imminent. As mentioned previously, L-band systems are pretty much entrenched in the industry and maritime companies will likely take their time migrating in this post-global recession landscape, not to mention the high-costs associated with satellite installation.

In the interim of this ramp up, we expect to see more and more maritime companies dip their toes in the VSAT pool through hybrid systems offering both VSAT and L-band capabilities. This scenario provides the best of both worlds. The biggest drawback for VSAT, up to his point, has been the scoop of its beam footprint. However, with the new satellite launches scheduled over the next 24 months, the Ku- footprint should vastly improve to fill in some of the gaps.

About Orange Business Services
As part of the France Telecom group, Orange Business Services is a leading global integrator of communication solutions for multinational corporations. With VSAT making it possible for vessels to become extensions of the corporate network, Orange finds itself uniquely positioned to address the needs of maritime companies. It has a rich history in connecting remote offices to corporate virtual private networks, and the premise for connecting sea-fearing ships to shoreside systems is the same, only on a more complex scale. Success depends on the ability to marry terrestrial capabilities with satellite capabilities while ensuring availability and global coverage.

With the Orange Business Services Maritime solution we are able to do just that. It integrates satellite with Business VPN so that employees can access the same applications regardless of whether they are on land or at sea. Global coverage is made possible by mixing multiple satellite technologies (including SCPC, TDMA, DVB-S2) with multiple Orange teleports around the world. Service level agreements are attached to the solution ensuring performance quality. Orange brings all these elements together enabling seamless communications from office, to port, to ship and back. 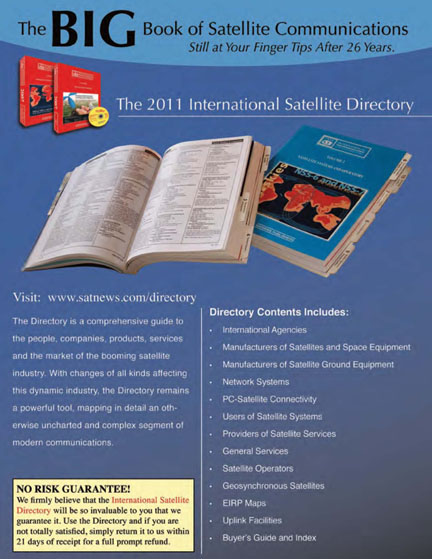