Mr. Milroy took the time to discuss with SatMagazine the trends and developments in Phased-Array Antennas... 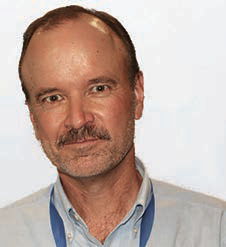 For a little perspective, let’s start with a quick overview of your company and current range of products.

Bill Milroy (BM): Our company has been in the SATCOM antenna business nearly 20 years. We’re a privately held company based in Hawthorne, California, where we have a 75,000 sq. ft. engineering and manufacturing facility. We’re now up to more than 130 employees and still growing. We have carved out a strong position in flat-panel phased-array satellite antennas for aero and land-mobile applications.

As SatMagazine readers probably know, ThinKom is the supplier of Ku-band phased array antennas for Gogo’s IFC systems. As of May 1, our Ku3030 antennas are flying on more than 1,200 aircraft across more than 17 major airlines, including Delta Airlines, American Airlines, Alaska Airlines, British Airways, Air France, Japan Airlines and Virgin Atlantic. These aircraft span all global flight paths from equatorial to high polar routes with an accumulated total of over 8 million flight hours and better than 98 percent availability (>100,000 hours MTBF). 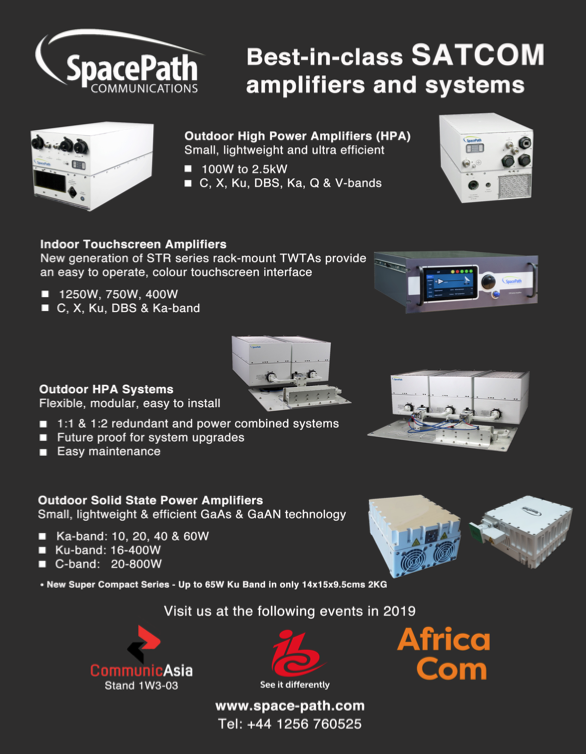 The company also supplies X-, Ku-, Ka- and Q-band phased-array antennas for vehicle-mounted, man-portable and fixed solutions to government and commercial customers through partnerships with third-party integrators and prime contractors.

BM: Our underpinning patented antenna technology is called VICTS, which stands for Variable Inclination Continuous Transverse Stub — a mouthful, to be sure. While strictly speaking it is a mechanically steered phased array, it is not a gimbal-mounted antenna. In fact, VICTS combines the benefits of both gimballed MSAs and the new ESAs currently being proposed (although none are yet in production) without their drawbacks.

Without getting too far down into the technical weeds, VICTS provides high beam agility of up to 1,000° per sec², low prime power demand and spectral efficiency that’s 2x to 5x better than other phased arrays delivering 3-7 dB/K higher G/T for the same active area.

As Ka-band satellites proliferate, how will this affect your company’s product strategies?

BM: ThinKom’s ThinAir® Ka2517 phased arrays are already in production and commercially available. They have undergone DO-160 certification, ARSTRAT/DISA testing and WGS approval, and are now flying on a fleet of U.S. government aircraft with the highest reliability requirements. Multiple STCs are also underway for commercial aviation, and we expect to be able to announce commercial adoptions very soon. In the meantime, we are actively testing the Ka2517 in the air and on the ground, across multiple
Ka-band constellations. Recent tests have revealed throughput rates that would previously only be attainable with a large parabolic dish.

For instance, we recently concluded ground tests with Newtec’s new-generation Dialog modems with impressive throughput measurements. The most recent test took place from May 1 to 2 in collaboration with Newtec and COMSAT using the Avanti Communications HYLAS 4 geostationary satellite,. Data rates of up to 260 Mbps downlink and 50 Mbps uplink with 100 percent error-free operation over a range of elevation angles as low as 27 degrees were achieved.

In March, we performed a similar test at our Hawthorne facility with Newtec modems over Inmarsat’s I-5 Global Express satellite military beams, in which we recorded 185 Mbps on downlink and 35 Mbps on uplink, with zero errors across a range of elevation angles from 15 to 45 degrees. It was noted that the data rates would have been about 25 percent higher at in-flight (above-the-weather) altitudes.

Earlier this year, we ran successful in-flight connectivity trials of the Ka2517 on the Scaled Composites Proteus high-altitude, long-endurance aircraft at the White Sands Missile Range in New Mexico. The Ka2517 maintained uninterrupted connectivity with the Inmarsat Global Express satellite through all phases of flight, including take-offs, in-flight maneuvers at altitudes over 50,000 feet and landings, at elevation angles as low as 15 degrees.

As you can see, we are fully committed to the Ku- and Ka-band spectrum. We’re frequency (and modem) agnostic. We foresee that Ku-band will be a significant part of the mix in the foreseeable future, and we will continue to support both. The basic architecture of our Ka- and Ku-band VICTS antenna designs is essentially the same. 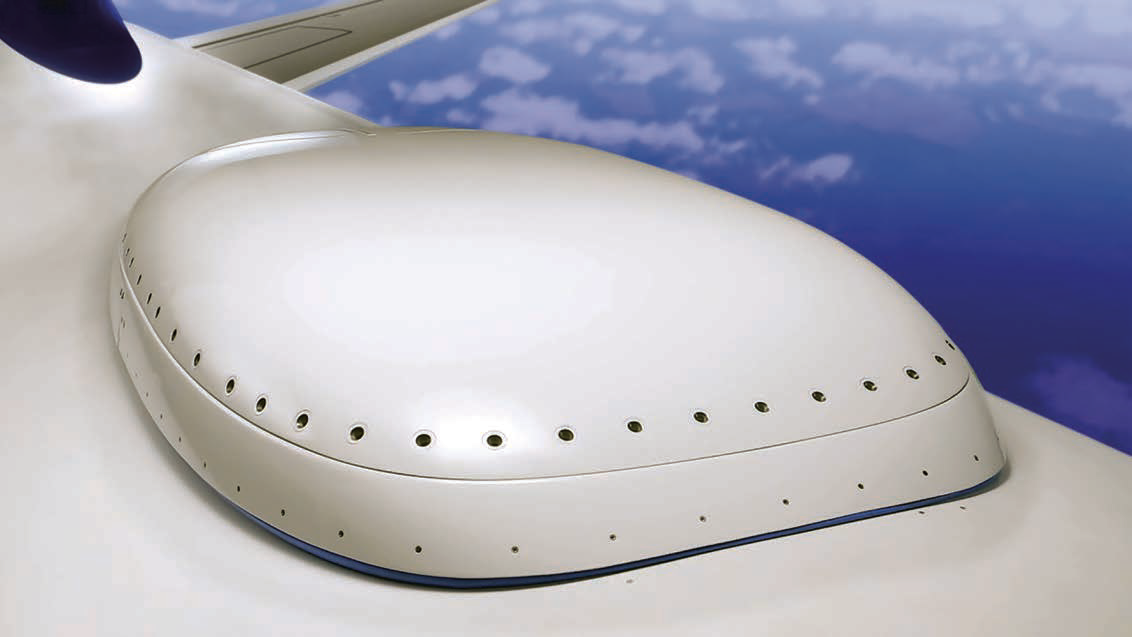 What about other frequency bands?

BM: We see a trend toward higher frequencies from both government and commercial user communities, and VICTS technology is fully capable of operating in those bands. There is increasing demand, for instance, for Q-band (44 GHz), E-band (71-86 GHz) and W-band (95 GHz) systems, and without going into any details I can tell you that we have already flight tested W-band VICTS antennas.

Let’s shift the conversation to talk about the proliferation of LEO and MEO satellite constellations that are coming into play. How do your VICTS antennas perform in that environment? Will you need to develop an ESA product to compete in the LEO and MEO world?

BM: Even if only a small percentage of the proposed new LEO and MEO constellations are ever deployed, they have the potential to be a major disruptor in the SATCOM industry. But the GEOs are not going away and will continue to be an important part of the technology mix. We believe that users and sellers of satellite connectivity should not be compelled to gamble their futures on an “either-or” choice. We see no reason why end-users shouldn’t have the best of both worlds. Our vision for the future is a truly integrated multi-constellation solution, in which the satellite antenna would be able to switch seamlessly back and forth from GEO to MEO and LEO satellites to provide truly global, pole-to-pole connectivity.

Key requirements for functioning on LEO or MEO satellites are beam agility and switching speed, so as to ensure minimal handoff times between the fast-moving satellites. Our antennas currently support re-steer times of 100-800 msec, depending on satellite-to-satellite geometries, which is lower than typical “ping” times associated with applications running on GEO systems today.

We’re already actively testing our antennas over LEO and MEO satellites with positive results. We are actively engaged with Telesat to develop a Ka-band enterprise user terminal for their LEO system, and we also recently completed successful ground tests of the Ka2517 with the SES O3b network, acquiring and tracking successive O3b satellites at 13-degree elevation and successfully tracking them for 30-minute periods as they traversed across the sky. 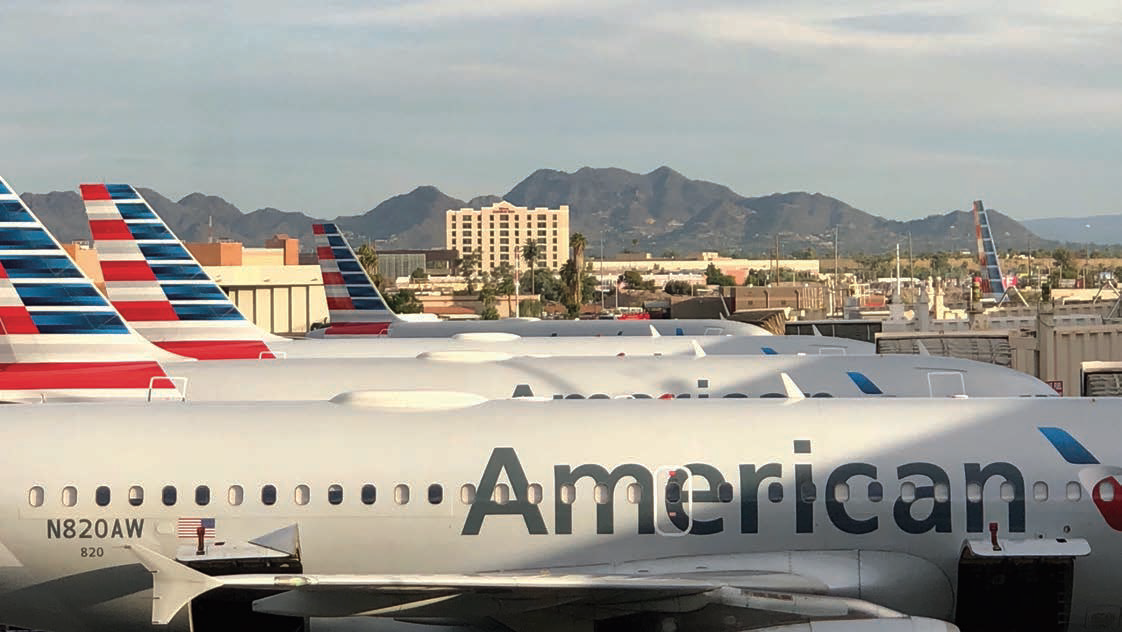 Will ThinKom be able to compete in terms of pricing with ESAs?

BM: As demand increases, we believe our antennas are uniquely well-suited to exploit commoditized production materials, such as aluminum, metalized plastics and foam, and large-scale production processes, such as molding, extrusion, stamping and additive manufacturing. These will enable us to be competitive in CAPEX, while our superior spectral efficiency will provide substantial OPEX savings in terms of dollars per MB delivered year after year.

BM: Naturally I cannot reveal details of products under development, but I can tell you that we previewed an interesting new concept at the DC show in May. It’s a gateway or ground station antenna that calls for a coherently combined array of VICTS-based phased arrays with dynamic element allocation to form multiple simultaneous independently steerable and reconfigurable beams to track multiple satellites.

Leveraging the technology we’ve employed in commercial IFC, this would provide a reliable, lightweight and low-cost alternative to the vast “farms” of large parabolic dishes currently in use today. I’ll have more to share with your readers on these and other developments in SatMagazine’s Year in Review issue in December — please stay tuned.
www.thinkom.com