In April 1972, an ad hoc team of U.S. Intelligence Community members was formed to devise a means of measuring and accounting for areas searched using satellite imagery with an emphasis on recording the interpretability and quality of the imagery used in the search. 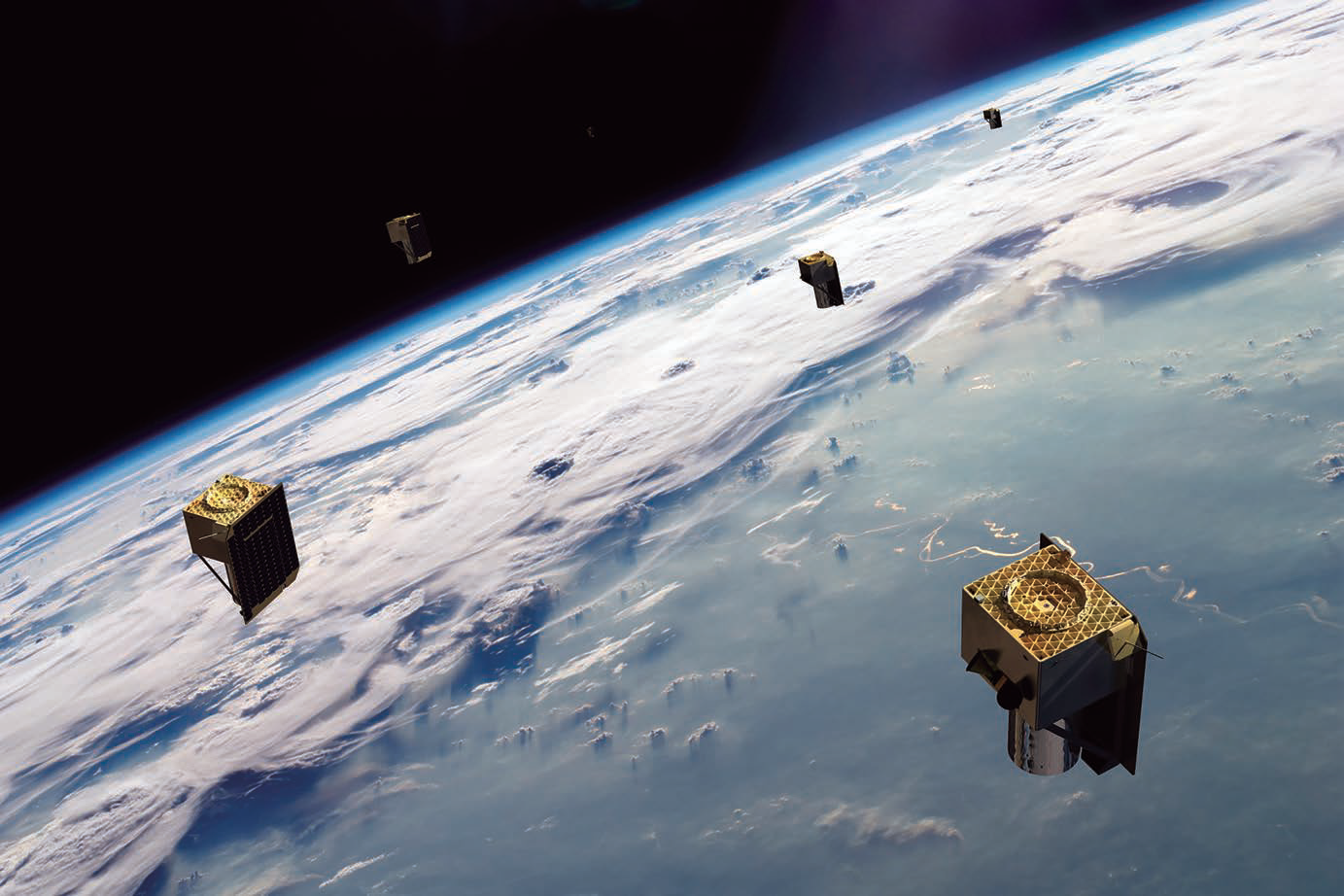 Artistic rendition of the Black Sky constellation. Image is courtesy of Spaceflight Industries.

Out of this work, in March of 1973 a specialized imagery interpretability rating scale, called the National Imagery Interpretability Rating Scale (NIIRS), was introduced.

The NIIRS scale defines different levels of image quality and interpretability based on the types of tasks an analyst can perform with images, the higher the rating, the higher the quality of the imagery.

The Evolution of Data Collected
For much of the history of commercial spaceflight, high-resolution satellite imagery has not been widely accessible.

The cost to build, launch, and operate a single high-resolution imaging satellite could reach (and exceed) half-a-billion dollars. Given the significant capital investment, access to high-resolution satellite imagery was limited to a select group of government customers and large multi-national corporations — even for those customers, it would be rare to get imagery of a specific site more than once per day.

The advent of small satellite systems, lowcost launch capabilities and high-speed cloud processing technologies has ushered in a new generation of low-cost, high-resolution satellite imaging constellations that are able to collect multiple images of a given target each day.

In some cases, multiple images can be provided within an hour. This enables a new level of temporal information to be extracted from satellite imagery; that is persistent change detection and monitoring of time-critical activities.

The (Proposed) TIIRS Today there is no common, well-defined means for analysts to measure and account for the temporal information contained within a set of satellite images collected from a single target over a period of time with a given frequency. The industry could benefit from the development of a new system: The Temporal Imagery Interpretability Rating Scale (TIIRS).

This scale would be leveraged as a mechanism to define different levels of temporal information that can be extracted from a set (or stack) of satellite images collected over a certain frequency of time. This TIIRS scale would be based on the types of temporal information an analyst can discern with a set of images collected with a given frequency (or TIIRS rating).

The use of a TIIRS scale would allow imagery analysts and consumers to define the level of persistence needed to answer specific questions or to monitor critical activities. 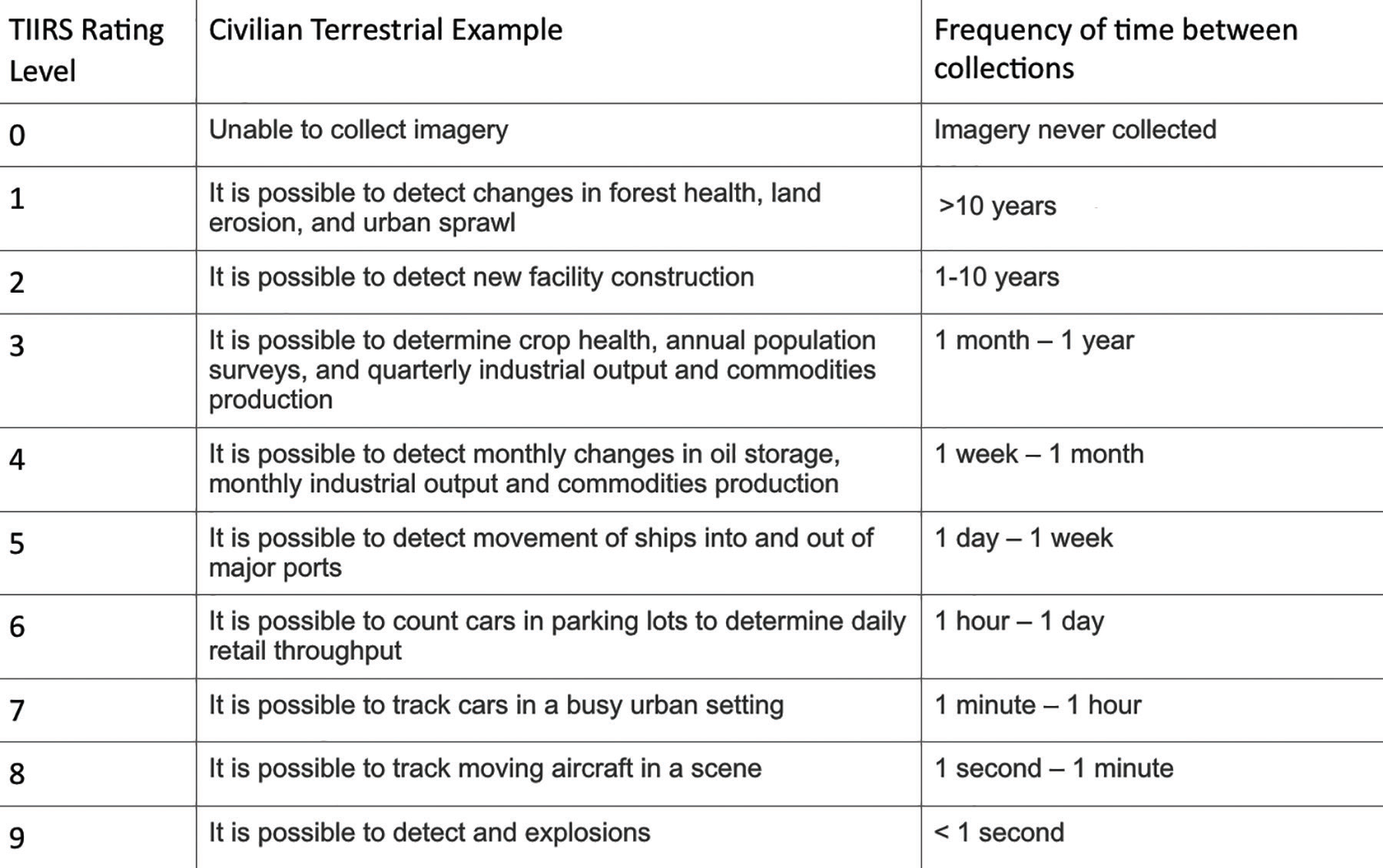 Just as with the NIIRS Scale, the TIIRS Scale can be separated into smaller increments. For example, imagery collected a frequency of TIIRS-5.5 would correspond to an image collected every four days. A notional TIIRS rating scale is shown in Figure 1.

Utility of a Combined NIIRS Scale and TIIRS Scale
With the combination of the NIIRS scale and the proposed TIIRS scale, future imagery analysts and consumers could more efficiently describe the level of persistent monitoring and corresponding imagery resolution needed to solve a specific intelligence problem.

For example, to count the specific number of vehicles in a Home Depot parking lot every hour, an imagery customer may specify images with a resolution rating of NIIRS-5 with a collection frequency of TIIRS-7. 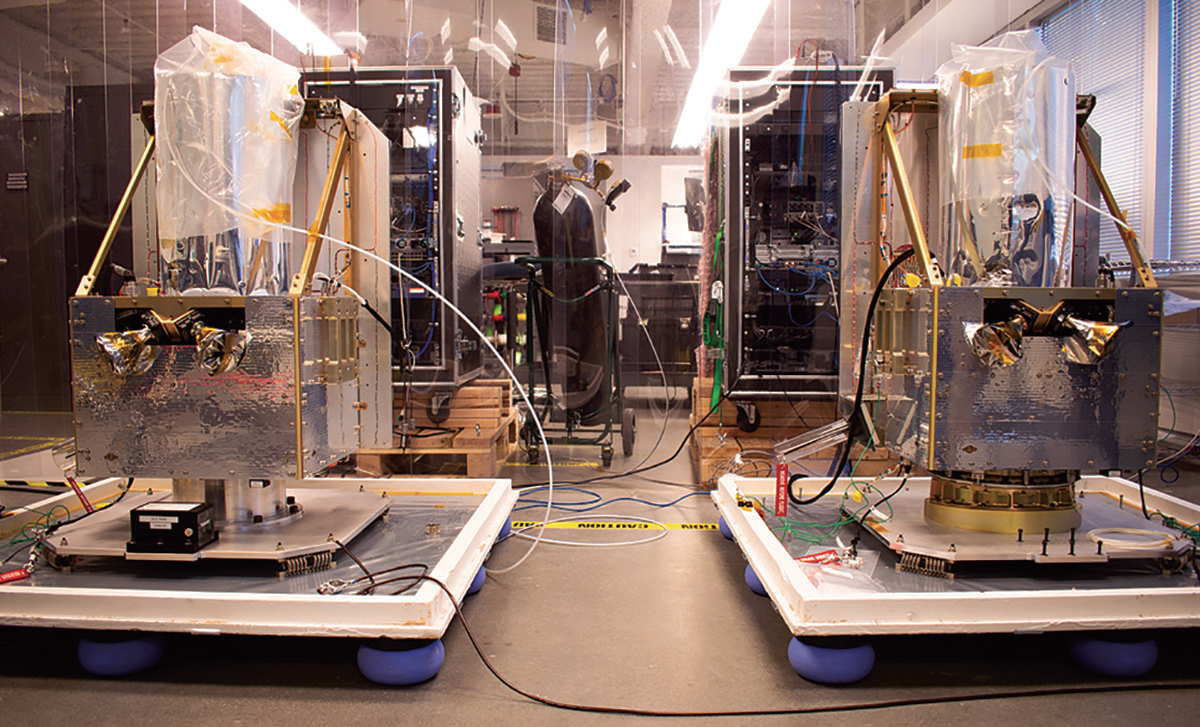 Conclusion
The introduction of the NIIRS Scale offered a tremendous advantage to imagery analysts and consumers as a mechanism to describe the utility of satellite imagery of varying resolution. The emergence of large constellations of small, low-cost, imaging satellites adds a new dimension to the satellite imaging industry. This new dimension is the value of imagery collected with varying levels of frequency; sometimes referred to as the time value of imagery. The TIIRS Scale provides a means for future imagery analysts and consumers to compare, contrast, discuss, and categorize the value of imagery collected at various frequencies.
www.spaceflightindustries.com/

Dr. Peter Wegner, Chief Strategy Officer at Spaceflight Industries, leads the development and operations of the BlackSky constellation to provide low-cost, high-resolution imagery of the planet collected at speeds that enable monitoring of critical events and human activities on a global scale. 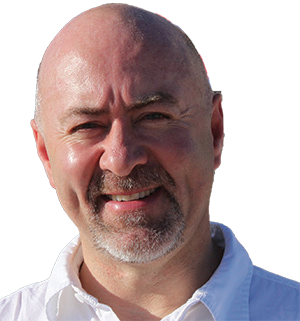 Prior to this role, he was the Director of Advanced Concepts at Utah State University’s Space Dynamics Laboratory where he directed investments in new technologies to solve some of the nation’s most critical emerging problems.

Peter also served as Director of the DoD’s Operationally Responsive Space Office at Kirtland AFB, NM where he directed a $120M/year budget and more than 60-person staff chartered with creating a national strategy to develop new and innovative techniques to design, build, test, and operate space systems to support DoD missions. 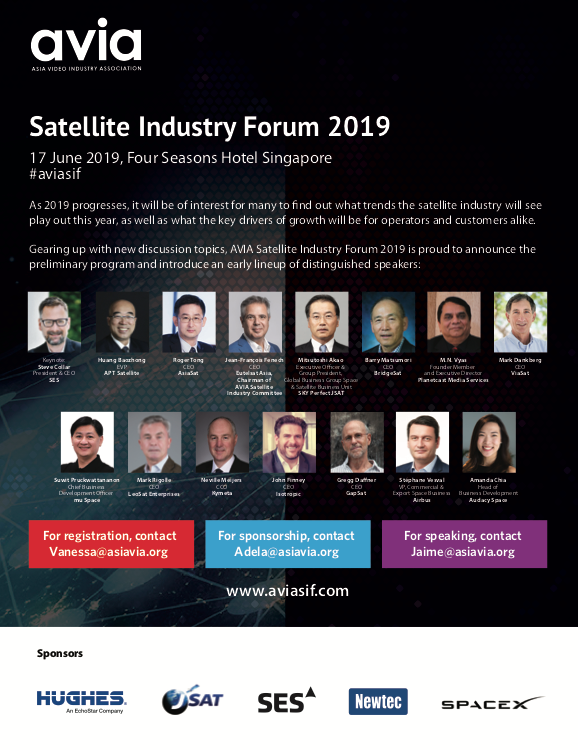