In a world first, the underwater, shallow reef topography of the entire Great Barrier has been comprehensively mapped. This was made possible by satellite-derived bathymetry (SDB) technology.

EOMAP, the global leader in SDB applications, together with its Australian partners, recently launched high resolution digital maps that are critical for identifying, managing, preserving and protecting what lies within the waters of this global, biodiversity icon.

Background
The Great Barrier Reef (GBR) is of international importance. Despite the need to monitor, manage and protect this World Heritage Area, the broad-scale, environmental baseline information available to date is surprisingly incomplete. Indeed, project partner Dr. Robin Beaman of James Cook University confirms that the new satellite-derived product is different than anything else previously available. Until this product, nearly half of the shallow water reef area on the Great Barrier Reef had not been mapped using modern digital surveys. While these shallow coral reefs are the most ecologically significant, they are also the most difficult to map, due to being either too remote or because of their shallow nature, which makes them navigationally dangerous. 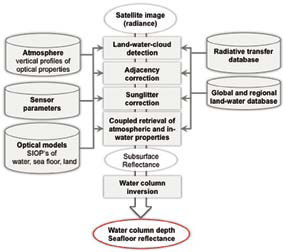 Instead of relying on traditional surveying vessels or aircraft to map the many ‘un-map-able’ areas of the reef, the aquatic remote-sensing company EOMAP used space-borne satellites to overcome these hurdles. The result is the largest project of its kind ever conducted. The 3D water depth maps have a 30m horizontal resolution over approximately 350,000 km2 of the Great Barrier Reef World Heritage Area and Torres Strait, providing not only more detailed individual reef data, but also a complete picture of Earth’s largest coral reef ecosystem.

Approach
Satellite-derived bathymetry (SDB) is the mapping of water column depth using satellite imagery. Unlike traditional water depth mapping technologies, such as ship-based sonar, which typically acquire depth readings along a number of survey transects, SDB delivers an independent water depth estimate for every usable pixel in a satellite image. This effectively provides a continuous 3D model of seafloor topography, the equivalent of an underwater digital elevation model (DEM), where the horizontal resolution corresponds to the pixel size in the satellite image.

It follows that SDB is dependent on water clarity, typically retrieving depths down to approximately 30 meters in clear waters (such as associated with tropical coral reef environments). As it happens, this is the depth interval that is the most challenging and costly for traditional, ship-based bathymetry surveying 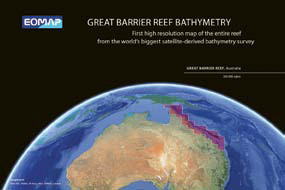 A number of satellite sensors have been tested in SDB applications, including (in alphabetical order) ALOS, IKONOS, Landsat, MERIS, Quickbird, and WV-2, where the selection of the appropriate sensor needs to be done on the basis of fit-for-purpose for the project at hand.

For this project, imagery from the Landsat 7 satellite series was selected, based on the satellite having a comprehensive archive of (redundant) coverage of the GBR, suitably high horizontal resolution (30 m pixels), a large enough footprint to keep the number of processed scenes to a manageable number, and low cost (essentially free from USGS).

The redundant coverage, or availability of several overlapping images for every part of the GBR, offered the ability to select the most suitable scene for every area. This was an important consideration since environmental conditions such as sunglint on the sea surface or turbidity in the water column limit the ability to retrieve water column depth. In total, 52 Landsat scenes were processed.

For the Great Barrier Reef project, all processing was done using EOMAP’s customizable Modular Inversion Processor (MIP) system. In a nutshell, EOMAP’s proprietary algorithms are bundled into function-specific modules that are connected through a semi-automated processing chain, which further accesses various databases for additional input. This is illustrated in more detail in Figure 1 above. 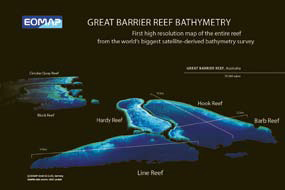 An important ancillary output is the data quality map, where each pixel is given a quality rating that reflects the reliability of the information retrieved from that pixel. This per-pixel quality assessment takes into account clouds or haze in the atmosphere, glitter on the sea surface, turbidity in the water column, and the viewing and illumination geometry during image acquisition, all of which are environmental parameters that can affect the estimation of SDB. A user can therefore interrogate the bathymetry map in conjunction with the quality map, and apply relative uncertainty measures to any given interpretation.

Outcome
For the GBR project, the final result is a digital, high resolution, shallow water bathymetry map of the entire Great Barrier Reef. The product has a nominal vertical resolution of 10cm and a horizontal resolution of 30m. Figure 2 in the previous column illustrates the coverage of the final product, where the bathymetry is in color-coded map form. A zoomed-in 3D version of selected reefs (using the same data set) is shown in Figure 3, below.

The EOMAP product will find uses ranging from studies at individual reef level to bigger picture assessments of the entire Great Barrier Reef. Examples of applications include environmental baseline inventorying and monitoring, water quality modeling, measuring responses to both man-made and natural impacts, such as sediment transportation and tropical cyclones, and helping to predict the likely impacts of climate change effects, such as sea level rise and increased tropical cyclone frequency. It will also help target priority areas for more detailed data collection. As an example, with the considerable improvements this promises to current ocean modeling, scientists can now more accurately model trajectories of crown of thorn starfish larva to where they are next likely to inhabit the Great Barrier Reef.

Commenting on the bigger picture, Professor Stuart Phinn, of the Centre for Spatial Environmental Research at the University of Queensland, and one of the key project partners in Australia, noted that “[these] reflectance and depth products will form the fundamental baseline data able to be used by government monitoring agencies for monitoring and management planning, research institutions for monitoring and modeling, and private industry to build their own applications for the data. This will provide the basis for a range of derived map products and the need for higher spatial resolution versions of these data.” 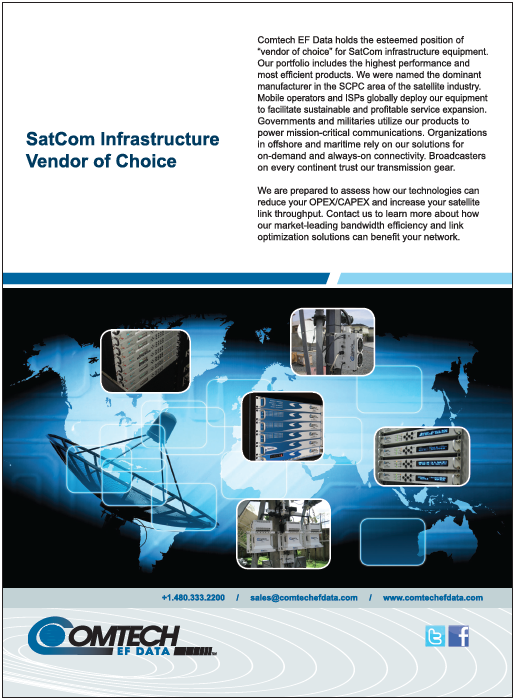 Outlook
Looking ahead, EOMAP has already produced samples of a potential next generation GBR product: 2 m horizontal resolution bathymetry and seafloor color using DigitalGlobe’s WV-2 sensor. An example of this can be seen in Figure 4 on the previous page. Mapping the entire GBR with these 2m data would be an even more ambitious undertaking, and would probably require one or more project partners, such as the Australian government.

At the same time, and in parallel with business-as-usual SDB projects (notably in the environmental management and oil and gas sectors), EOMAP will now continue producing SDB maps for selected priority areas worldwide, using data from the most suitable sensor on a case-by-case basis. This is part of an ongoing initiative to build a catalogue of off-the-shelf satellite-derived bathymetry products available for immediate use. To this end, EOMAP welcomes input from potential users in setting the order of priority for areas that will be covered by the off-the-shelf processing initiative.

To learn more about the Great Barrier Reef SDB project, please visit http://www.eomap.com/great-barrier-reef where you can access a comprehensive project information booklet, sample data, and sign up for news and updates.

Sophisticated map products based on multi- to hyperspectral remote sensing data, as well as classification software solutions, comprise EOMAP’s core business. Our solutions rely on standardized physical models and work independently of scale, sensor type, and geographic location. We offer customized, large-area mapping based on satellite and airborne imagery for a manifold of applications with a focus on aquatic remote sensing. EOMAP’s services can be applied in environmental monitoring and spatial explorations, in particular for coastal zones, inland waters, wetlands, and other areas where high-precision mapping is required. 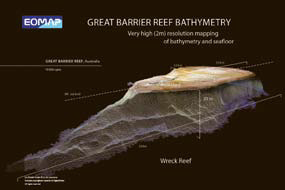 Our software processors are based on the latest scientific findings and deliver standardized products such as suspended matter, phytoplankton, and dissolved organic material (DOM) from both deep inland and coastal waters. We can generate reliable and precise bathymetric charts and sea floor vegetation maps for optically shallow waters.

In February, EOMAP launched an off-the-shelf bathymetry product line which will transform the uptake and uses of digital bathymetry data.

Indeed, Shell Petroleum announced at the recent International Petroleum Technology Conference (IPTC) conference cost savings of more than $1 million when using EOMAP solutions instead of the previous methods, for mapping a 740 sq km area off the coast of Qatar. 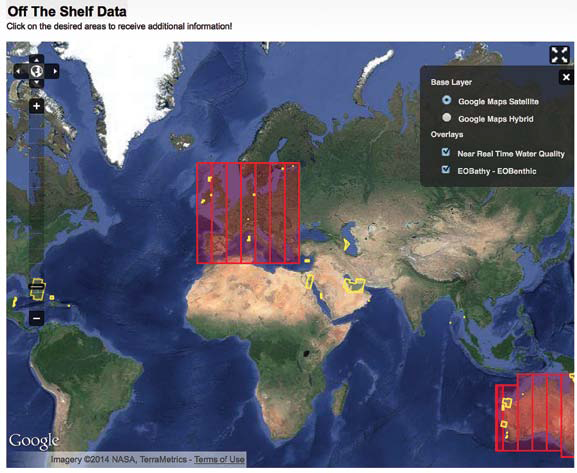 “For this location and coverage, we estimated to have made a cost saving of approximately one million dollar compared to a traditional executed bathymetry and/or topographic LIDAR survey,” said Joris Siermann, Qatar Shell GTL Limited during the IPTC meeting.

“Access to this technology solution has—until now—been on a per request basis, with a concomitant price tag and wait times. Now, interested users can browse our off-the-shelf catalogue of already processed data, instantly evaluate the suitability of the product for their purposes, and proceed to acquire it directly.” said Dr. Heege.

EOMAP gained significant media attention this past November when they announced that the shallow water bathymetry of the entire Great Barrier Reef had been completely mapped for the first time.

More recently, in the Arabian Gulf, the coastal waters stretching from Bahrain to Dubai were comprehensively mapped at 30m horizontal resolution. For parts of the region, which have never been surveyed before, this represents the first bathymetric dataset ever created.

Further to these, a number of other worldwide locations have already been added and EOMAP will continue populating the off-the-shelf high resolution bathymetry catalog on a priority area basis.

Dr. Knut Hartman, head of EOMAP’s Bathymetry Group, said, “we have a system for selecting locations for off-the-shelf processing, but we are flexible, and welcome input from interested parties as to where we should target next.”

The online catalog, which is being populated on a priority basis, is accessible at http://www.eomap.com/off-the-shelf-data. 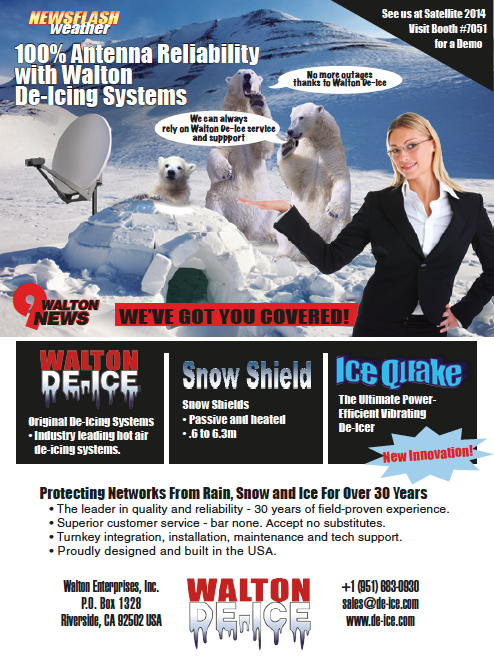