The HX System from Hughes is designed and optimized for small to medium-size networks, and employs the key features needed for a wide range of applications, such as Internet access, IP trunking, cellular backhaul, Virtual Network Operator (VNO) hosting, and communications on-the-move (COTM). A key feature of the HX System is the ability to cost-effectively scale to large networks, providing operators with an effective platform on which to start small and grow as their business grows.

An Overview
HX System 4.0 brings a host of technology enhancements that enable higher performance, higher efficiency, and a number of significant new features, further reinforcing it as the leading choice of satellite platform for small- to medium-sized networks serving specialty markets.
Availability of the new HX routers is immediate; software and features will be released later in 2012.

– HX50L is a replacement for the very popular HX50 and provides two key features: LDPC coding on the return channel (see below for the benefits of LDPC); and dual IPv6/IPv4 operation (see below for a description). 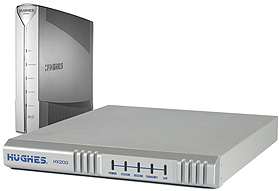 – HX9 0 is an all new HX satellite router designed with the high-thoughput performance of its HN System counterpart, the HN9400 and is ideal for nextgeneration Ka-band satellite systems.

– HX2x0 series has undergone a performance boost that doubles throughput performance and is available via a software download to previously installed units. In addition, the HX200 now supports LDPC on the return channel (up to 2 Msps). The chart in Table 1 compares the functionality of the powerful family of HX broadband satellite terminals.

Efficiency Improvement
Low Density Parity Check (LDPC) coding has long been recognized as one of the most efficient coding techniques and enables modem performance close to theoretical optimum. LDPC was designed by Hughes and incorporated into the IPoS/ DVB-S2 standard in 2006. With HX System 4.0, LDPC coding is implemented on the return channel of HX routers for rates up to 2 Msps. 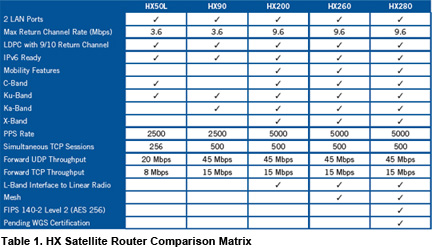 Using short-block, low latency LDPC codes in the return or inbound direction, Hughes is able to achieve an 8–12 percent bandwidth efficiency increase over existing Turbo Coded inbound systems as illustrated in Figure 1. Multiple LDPC block sizes are supported to maintain the high efficiency associated with variable burst size. Together with adaptive coding, which enables burst-by-burst changes of the FEC rate, the Hughes adaptive LDPC always optimizes the return link for the link conditions. The Hughes adaptive coding implementation typically provides about 20 percent improvement on the throughput of the return link as compared with a fixed coding rate that must accommodate rain fade. When coupled with the 8–12 percent gain provided by the sophisticated LDPC coding, a total of 28–32 percent overall improvement in bandwidth efficiency may be achieved over Turbo Coded systems. 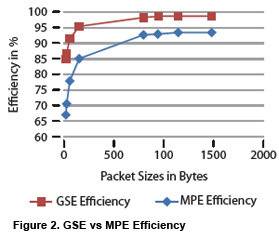 To increase efficiency for the forward channel, Hughes has implemented an advanced and efficient method of encapsulation of IP traffic on the forward link. The Generic Stream Encapsulation (GSE) (ETSI TS 102 606) was designed by the IPDVB working group to optimize bandwidth efficiency for user IP traffic by encapsulating IP datagram and other network protocol packets directly over DVB-S2 generic streams.

In HX System 4.0, bandwidth assignment efficiency is further increased through the implementation of the Hughes On- Demand Streaming (ODS) feature. Previously available only on the HN platform, the ODS is a powerful QoS/ToS-based, performance-enhancing feature that dynamically assigns Constant Bit Rate (CBR) transport services per application session. On-Demand Streaming enhances the performance of VoIP and video applications that are based on Session Initiated Protocol (SIP) and H.323 standards, as well as latency sensitive data traffic. With ODS, the HX System 4.0 can transparently recognize SIP calls and allocate high-quality CBR bandwidth for the duration of the call. Once the call is complete, the bandwidth is deallocated so that it is available for other applications.

HX System 4.0 employs a dual stack architecture for IPv4 and IPv6 traffic, maintaining an independent protocol stack for each Internet Protocol version. This enables simultaneous support of both IPv4 and IPv6 devices on the same Ethernet segment at either the remote or gateway portion of the HX System 4.0.

The full IPv6 functionality will be available in Q3 of 2012; the HX50L, HX90, and all of the HX2x0 satellite routers are “IPv6 ready.” A simple software download to these devices will enable the dual stack IPv4/IPv6 functionality. Note that certain hub components may need to be upgraded. 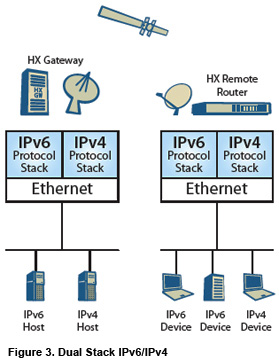 HX System 4.0 for Cellular Backhaul
Included within HX System 4.0 is a set of features that significantly strengthens support of cellular backhaul and any other latency sensitive real-time applications. HX System 4.0 incorporates a fast packet processing queue especially designed for real-time applications to achieve lower overall latency. For the return channel, the “just in time” burst feature ensures that data packets are transmitted at the earliest possible opportunity. An integrated jitter buffer enables an operator to configure the desired jitter performance. With these features, the HX System 4.0 is able to deliver roundtrip latency performance of 600 to 650 ms (depending on the jitter setting) with one-way jitter performance of 20 ms achieveable.

Enhanced VNO Capabilities
As part of HX System 4.0, the HX ExpertNMS™ (Network Management System) has been upgraded to provide enhanced management capabilities for Virtual Network Operators (VNOs). This new capability, which allows a VNO to monitor and control elements within their VNO domain, enables operators to effectively partition their network and provide complete control to the private users of these partitions. Figure 4 illustrates some of the new HX ExpertNMS capabilities. 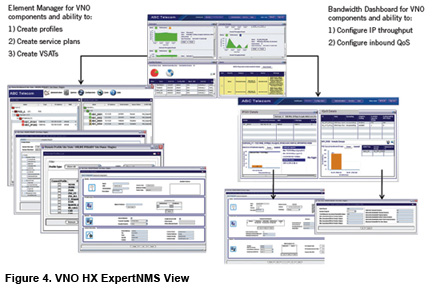 Automatic Beam Switching (ABS)
HX System 4.0 provides an automatic mechanism for remote terminals to determine the appropriate time to point to a different satellite and commence communications automatically over the new satellite path. This feature is critical for any mobile terminal travelling across wide geographic expanses including aircraft and ocean-going vessels. With the ABS feature, the remote makes the handover decision based on an embedded algorithm that uses the latitude and longitude of the remote.

Enhanced Doppler Compensation
With very high-speed mobile terminals, such as onboard jet airliners, the Doppler effect must be compensated so that the return channel demodulation at the Gateway can maintain signal lock. The enhanced performance of the HX200 satellite router performs this Doppler compensation itself thereby eliminating the need for external Doppler compensation.

Editor’s Note
HUGHES and HX ExpertNMS are trademarks of Hughes Network Systems, LLC. All other trademarks are the property of their respective owners. 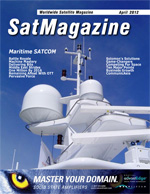