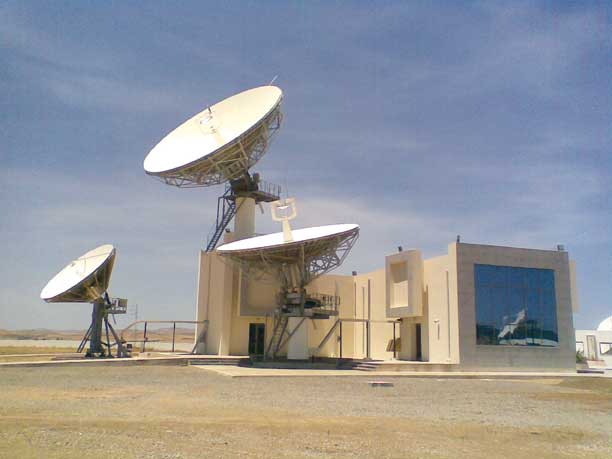 Over the past 15 years, much progress has been made among high power amplifier (HPA) manufacturers in the area of prime power to output power conversion, also known as conversion efficiency. These improvements have resulted in significant savings of electrical costs, as well as reductions of size and weight, and have been introduced in response to a market which is demanding any, or all, of multiple frequency capabilities, greater mobility, greener Earth stations and greater restrictions on electricity use. The most significant improvements have been made in traveling wave tube amplifiers (TWTAs), thus resulting in the continued popularity of the technology despite the advent of solid state power amplifiers (SSPAs) and subsequent improvements to those products since their inception. 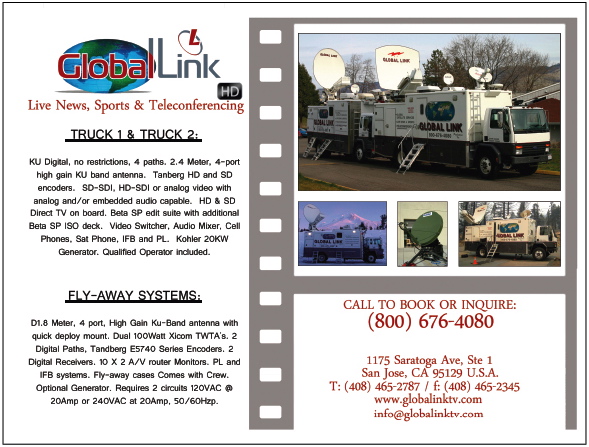 In order to make a valid comparison among the various technologies of HPAs, one must first find a common way, as well as the most meaningful way, to measure their effectiveness. The output power capability of SSPAs is commonly referred to by either the saturated power (Psat) they provide, or by the output power they provide at 1 dB backoff (P1dB, also known as the -1 dB compression point), depending on the manufacturer and frequency band in question.

The output power of TWTAs is commonly referred to by the minimum power the tube provides at saturation, prior to any loss within the amplifier. However, one of most useful measures of HPAs is at linear output power (Plin), or the point at which the amplifier can maintain the most output power while still conforming to restrictions on intermodulation products, spectral regrowth, and other non-linearities. For SSPAs, Plin is typically 3 dB backoff from P1dB. Thus, an SSPA advertised as a 150 W (P1dB) amplifier would actually have a Plin of 75 watts.

TWTAs are somewhat different. To calculate Plin, one must first account for the loss between the tube and the TWTA output, about 1 dB, and then subtract 6 dB. Thus, a “400 W” TWTA has a Plin value of 80 watts. However, if linearization is added, an option on almost all TWTAs, then Plin is doubled, and the “400 W” TWTA’s Plin value increases to 160 W. The conversion efficiency can be measured by simply dividing the linear output power by the prime power required to operate the amplifier at that output level. 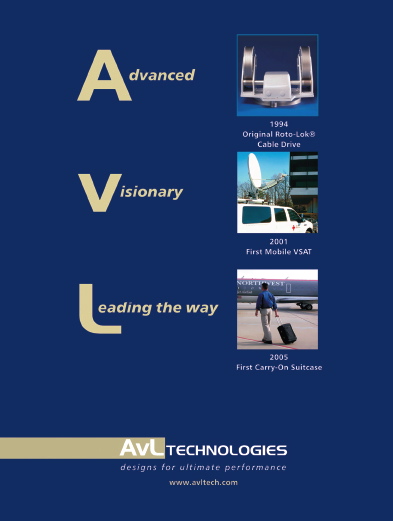 The TWTAs of 20 years ago had no linearizers, and operated with a tube that had a single-stage collector. The HPAs were usually in two-drawer configurations totaling over 20 inches in height and weighed more than 250 lbs. A 700 W TWTA would typically draw 3.04 kW at linear power (140 W), for a conversion efficiency between 4.5 percent.

SSPAs then entered the market with somewhat better numbers. A 100 W SSPA would provide 45 watts Plin while drawing 750 W of prime power, for 6 percent efficiency. With better efficiency and an RF “soft-fail” feature that allowed the less risk-averse to get away without redundancy, it seemed that SSPAs were the amplifier of the future, and that TWTAs would be shunted aside.

Linearizers + Dual Depressed Collectors
If TWT technology was to survive, it would certainly have to improve. Solid State amplifiers were only limited by the amount of power they could produce, and that number was increasing on a regular basis. TWT manufacturers first turned to a technology that had been available for years on space tubes — the dual depressed collector.

A collector is a chamber in the TWT where, after the electron beam has interacted with the microwave circuit, electrons are stopped in metallic electrodes, and the remaining kinetic energy is converted to heat.

Multiple collector stages enable more efficient use of the electron beam, thus more prime power is usable and less heat is produced. This results in the ability to produce smaller tubes and amplifiers, and reduces the power needed to fan the system and keep it cool. 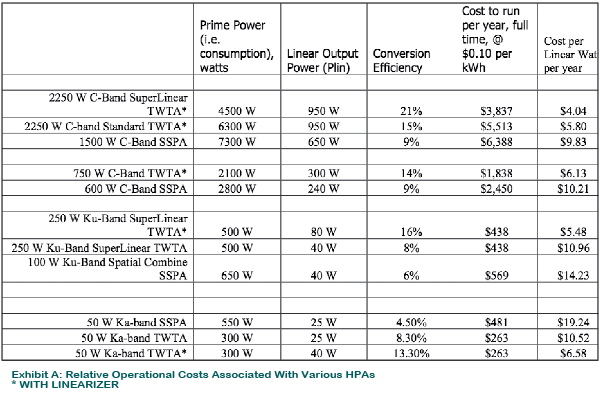 Immediately, TWTAs were drastically reduced in size and became much more efficient. Where previously a 700 W amplifier required over 3 kW of prime power at Plin, the new ones required only 2.3 kW, improving efficiency from 4.5 to 6 percent. While TWTAs could now match SSPAs for efficiency, amplifiers were reduced in size to only 5 to 9 inches high, depending on power level, and lost more than half their weight, down to 60-95 lbs versus the previous 225. 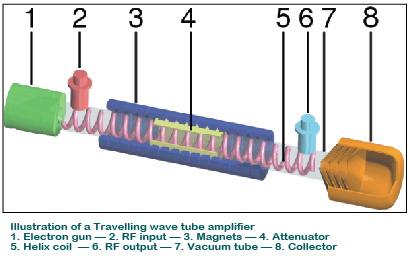 In addition, linearizers were also introduced to the market. A linearizer is a device that improves the AM to AM and AM to PM conversion of a VED, thus reducing the intermodulation distortion, spectral regrowth and noise power ratio (NPR). This enabled TWTAs to achieve linear power at double their previous output power levels. Where a 700 W TWTA previously operated at 140 watts output power to meet linear requirements, use of a linearizer enabled 280 watts.

All of a sudden, TWTAs were twice as efficient as SSPAs, and once again truly viable as competition for the newer solid state devices. This turns out to be true even for recent ‘spatially combined’ SSPAs, which are even less efficient than some corporate combined SSPAs.

SuperLinear® TWTAs
TWTA efficiency took another step forward in the mid-2000s with the advent of “SuperLinear®” TWTAs, a name trademarked by HPA manufacturer CPI, Inc. In a SuperLinear TWTA, the dual-collector tube is designed for optimization at Plin. The result is an amplifier that achieves more than 20 percent efficiency.

An example of this product is a 2250 W C-band TWTA, which offers Plin of 950 watts, while typically consuming 4.5 kW watts of prime power. While no SSPAs are capable of Plin of 950 watts, the most powerful consume 7.3 kW of power to achieve only 650 W Plin, or still only 9 percent.

Differences such as this do translate into real dollars. If one pays $0.10 per kWh, an end user can save thousands of dollars per year in operating costs for a single amplifier. Further, TWTA reliability has improved at such a rate, due to less heat, that 80,000 hours MTBF is typically achieved.

Recent Developments
With such significant headway being made by TWTAs, SSPA manufacturers have begun to concentrate on efficiency as well. One SSPA manufacturer has found a new way to combine solid state FETs more effectively, and can now provide 40 W Plin of Ku-band power using 650 watts of prime power for 6 percent efficiency. SSPAs combining is less efficient at higher frequencies, so this is actually somewhat of an improvement. However, this still does not match the 20 percent efficiency experienced by TWTAs of similar power. 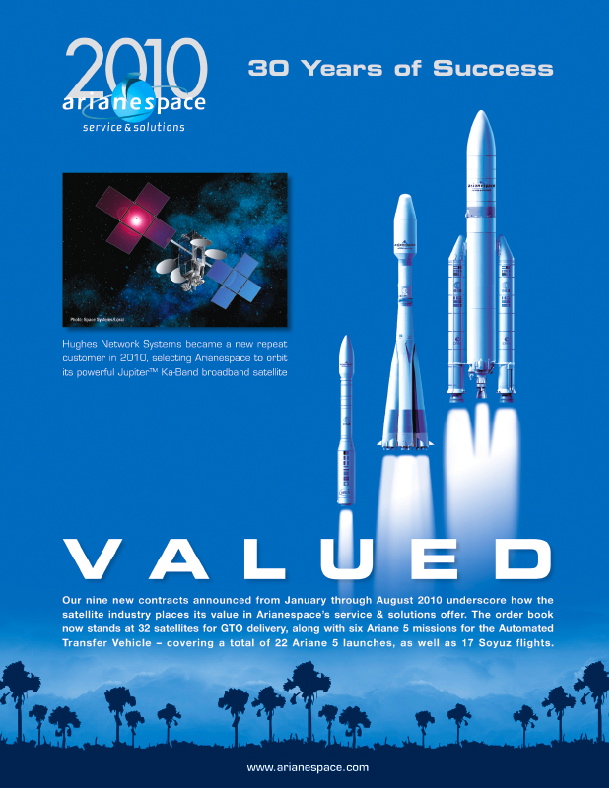