This is the second in a series of columns from the Space Data Association. In the last column, we talked about Radio Frequency Interference, a particularly hot topic in the industry. However, this time I’d like to focus on another, equally important arena—Flight Dynamics and reducing the risk of collision. 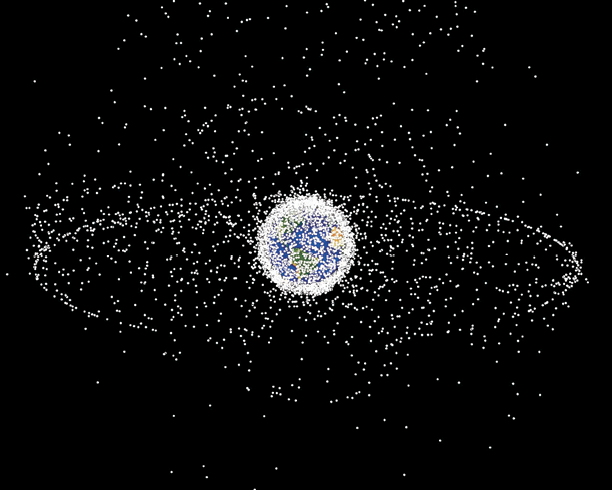 Estimation of the quantity of objects orbiting the Earth. This image was produced to show the number of objects, but the size of each piece is exaggerated. We can see that the LEO is the most populated region, but the GEO is practically all occupied. (Image from NASA).

Crowded Skies
Naturally, the risk of collision is one of the major concerns for all satellite operators—and for good reason when you realize that, considering debris of any size, the space population is estimated to be greater than 10 million in number. Of course, every rocket launched is cataloged by NORAD (North American Aerospace Defense Command), but it is only possible to track objects larger than 10 centimeter in LEO (Low Earth Orbit) and 1 meter in GEO.

Although LEO is the most populated region, the geostationary arc is almost completely full. It is also in the GEO region that the problem becomes more serious. This is because the objects are not under atmospheric dragging effect. This means the possibility of re-entrance onto the Earth’s surface is practically non-existent and, as a result, the GEO population is continuously growing.

Protecting GEO
As the industry is witnessing the challenges all are faced with in these crowded skies, the need to perform a de-orbit is becoming more apparent. Increasingly important for all satellite operators is for them recognize the need to take objects out of geostationary orbit and, ideally, put them in a trajectory called the Graveyard orbit. This orbit is computed in terms of the satellite area, mass and solar pressure coefficient. Usually, the altitude of this orbit is around 300 km related to nominal geostationary orbit.

However, the real catalyst for protecting the GEO arc will likely be guidelines from the regulators to ensure such happens. We are already seeing some traction here. For example, in the United Sates, before satellite operators can receive landing rights, they must present a debris mitigation plan to the FCC (Federal Communications Commission). The debris mitigation plan should include a budget to perform the de-orbit and this regulation is in effect for all satellites launched after March 18, 2002.

The International Telecommunication Union has also presented a recommendation for environmental protection of the geostationary-satellite orbit (Recommendation ITU-R S.1003-2 from 12/2010), which specifies the conditions to perform the de-orbit.

The main challenge remains that, unfortunately, a great many satellites are unable to be de-orbited due to breakup before the end of their life or lack of adequate fuel to execute the maneuvers necessary to elevate the orbit. Around 65 percent of tracked objects are fragments from the breakup of a spacecraft.

Space Surveillance
The most effective, essential way for a satellite operator to keep its fleet safe is by establishing a space surveillance program. The biggest barrier to building an effective space surveillance system is the quality of data available to perform the analysis. The public data for debris, generated by the U.S.A.F.’s Joint Space Operations Center (JSpOpC), is not accurate enough to form the basis for a mitigation maneuver decision. An operator can sign an agreement with JSpOC to receive conjunction reports from them. In this case, the close approaches are computed using a high accuracy orbit determination model. Although it has a more accurate model than the TLE, JSpOC is not able to predict any maneuver during the time span analysis. This means that you may generate a false alert, as the maneuver effects were not taken into account. Given the fact that any amount of fuel is valuable for satellite life, it is crucial to seek a highly reliable analysis before performing a mitigation maneuver.

This was the anchor founding principle of the Space Data Association (SDA), which was established in 2009 by Inmarsat, Intelsat and SES. The goal is to provide high reliable close approaches predictions. With the involvement of the major satellite operators, and a growing number of smaller operators across the globe, SDA is able to gather a vast amount of accurate data.

All operators associated to SDA are committed to sharing orbital and maneuver information. Couple this data and NORAD’s TLE database (for those objects for which we cannot obtain better quality data), our organization is able to compute close approaches far more accurately.

Sharing Is Caring
The more data we can gather, the better. Sharing data between the various sources is an obvious and crucial step. Many operators already have an agreement with JSpOC, enabling them to combine the more accurate data for debris from JSpOC and the operator ephemeris.

This has proven to be a highly reliable method for computing close approaches. In fact, we have been discussing how to improve collaboration between SDA and JSpOC. At the end of last year, SDA signed an agreement with the United States Department of Defense (U.S. DoD) to participate in the DoD’s Space Situational Awareness Data Sharing Program, the first such agreement with a non-satellite operator. This means that in the near future, SDA will be able to provide an even better space safety service for the satellite community. This is something we are looking to replicate on a global scale, which will be a key focus for us over the coming months.

We are also witnessing several organizations developing systems to increase the debris database. In most cases, telescopes are being used to estimate the orbits for those objects that cannot be tracked by NORAD. The use of telescopes to track geostationary objects has some advantages: one is the possibility of using existing observatories around the world, which increases the number of tracked objects; another is that building a tracking system with telescopes is easier and less expensive than a ground station with radars; also, tracking tiny bodies using telescopes with a large lens is also possible.

Combining all these sources of data means we can build a strong network within the SDA with the ultimate goal of keeping satellite fleets safe. It is vital we continue to work on new developments, as well as engaging with more entities, in order to improve space safety and grow satellite communication capability, all the while remaining free of risks.

Erika Rossetto is leader of flight dynamics for Star One. She coordinates orbital operations of Star One fleet, including space surveillance. She is responsible for specification of flight dynamics and orbital system control for upcoming satellites and follow-up such issues during satellite programs. She is developing research in orbital debris in collaboration with researchers of Brazilian national observatory and federal university of Rio de Janeiro.

On May 21st, the Space Data Association will be hosting a Flight Dynamics Meeting in Paris, discussing how SDA services can be improved. For more information or to register to attend, please visit www.space-data.org/sda/events/sda-flight-dynamics-meeting/