Home >> October 2019 Edition >> The Smallsat Revolution...Innovation, Interoperability and Automation
The Smallsat Revolution...Innovation, Interoperability and Automation
By Stanley O. Kennedy, Jr., President and Chief Systems Engineer (CSE), Oakman Aerospace, Inc. (OAI)
Over the summer, members of the global smallsat community gathered for a smallsat conference in Logan, Utah. The attendees, representing 45 countries and 1,100 organizations, took part in discussing this year’s conference theme, “Driving a Revolution.”
How does this theme describe the current state of the smallsat industry? To understand, it is worth looking back at how other industries have revolutionized our world today. Innovative advancements in technology, standardization and interoperability, and automation were the foundations upon which the automotive, aviation, and computer industries were built.
How will the current Smallsat Revolution be successful? Similar to past technological revolutions, there needs to be synergy between today’s emerging technologies and the tools that have stood the test of time. Advancements in high-performance, low-power processing and primary/secondary/tertiary launch must come together with standards and interoperability to fuel new and innovative space missions that were not possible even ten years ago.
The continuous growth of the industry is evident through the examination of many indicators. Estimates of the current worldwide smallsat market from SpaceWorks Enterprises, Inc.’s 2019 Nano/Microsatellite Market Forecast (9th Edition) predicted almost 300 nano/micro-satellite launches in 2019, representing a 17 percent increase over the 2018 numbers.
What has fueled this continued growth? And, more importantly, where is the market going? To answer these questions, it is prudent to reflect on the past and the innovations that have brought smallsats to where they are today.
A History of Smallsats
During the 1950’s and 1960’s, spacecraft designs were restricted by launch vehicle payload mass and on-board computer processing performance ceilings.

The limitations of launch vehicle throw-weight at the time made Smallsats the original satellite class, while low computing power limited them to technology development and experimental units.
The personal computer revolution of the 1970’s and 1980’s introduced higher-processing capability into spacecraft bus and mission designs. Though access to space remained expensive due to limited launch availability, increased functional and performance capabilities enabled significantly more capable spacecraft to be built.
These high performance, operational satellites needed to achieve long mission life, which required reliability.
Greater reliability was achieved through over-design, redundancy, and extensive test programs, resulting in larger and more expensive satellites.
Maximizing the performance and longevity of each space vehicle was the only way to achieve cost benefit. These capital assets (large, expensive, rigorous design, but highly reliable satellites with long lifespans) emerged as the dominating design for operational missions.
The divergence of spacecraft development into a capital asset-focused market created a gap in space access that drove the initiation of launch programs such as the Evolved Expendable Launch Vehicle (EELV) and smaller, dedicated launch vehicle designs, necessary to upgrade and modernize access to space. An industry discussion regarding smallsats versus capital assets and their roles in operational satellite utilizations continues to this day.
During the 1990’s, the space industry adopted a “faster, better, cheaper” approach toward satellite development that favored smallsats. Unfortunately, the reality was that satellites could not possess all three of these qualities.
In most cases, a satellite that was faster and better was extremely expensive — one that was quickly and less expensively made was inferior to the quality of capital assets. Additionally, many smallsat developers made unsubstantiated claims that these spacecraft could do everything capital assets were designed to accomplish.
In reality, smaller, less-capable satellites could only accomplish similar functional and performance of their larger cousins through multi-vehicle configurations which, in turn, required better on-board systems and relative navigation technologies that were just starting to
be developed.
In hindsight, this mentality actually set the market back a number of years due to some
heralded smallsat failures that did not achieve the cost savings nor mission assurance necessary to achieve operational success.
Though there was hope that smallsats could overtake Capital Assets in popularity during the 1990’s, the inertia of the satellite market remained against commercialization, fueled by government bureaucracy and industry entrenchment.
Smallsat Industry Trends and Enablers
Arguably, the “Smallsat Revolution” began 20 years ago, when cubesat standards were originally defined by Cal Poly, located in San Luis Obispo, and Stanford University in 1999.
The development of cubesats effectively allowed state and non-state actors cost-effective and reliable access to space. They also forced designers and developers to innovate in order to maximize functional and performance attributes within the constraints of the cubesat form factors.
Not unlike many industries’ revolutions (automotive, aviation, computer, etc.), common standards across the smallsat industry became necessary to facilitate new technologies, innovation, and market growth.
Modular Open System Architecture (MOSA) standards began to emerge at the same time as the cubesat standards, with the goal of ensuring interoperability among physical (mechanical and electrical) and software (protocols, etc.) interfaces.
MOSA has been quietly evolving over the last decade, acutely synchronized with the smallsat utilization trend from technology demonstration missions to operational systems and constellations.
Open systems and emerging open-source hardware and software solutions are providing the infrastructure, products, and services necessary for interoperability and integrated mission capabilities, driving today’s smallsat revolution. Standards and open system interfaces allow rapid and responsive systems to be designed and deployed to support government and commercial activities.
These constructs have also supported the development of a robust, worldwide 2nd and 3rd-tier supplier base. This is demonstrated in the Top-1000 NewSpace Companies annual report published by NewSpace People.
Broad commercial growth has also been accompanied by related, low-cost Science, Technology, Engineering and Math (STEM) outreach tools for workforce development. Economic prosperities of the communities built around these initiatives are important by-products of the smallsat revolution.
A prime example of this is the recent boom in aerospace economic drivers along the Front Range region of the Rocky Mountains in Colorado. “Aerospace Alley,” as it is known, consists of more than 200 companies providing hardware and software components, products, and services for the satellite marketplace.
The majority of these companies are small businesses, such as Oakman Aerospace, Inc. (OAI), focused around technology enablers. There are countless of additional, similar examples of these clusters and innovation centers around the world.
OAI plays an important role in this new era of the smallsat revolution, specializing in rapid and responsive MOSA space systems design
and development. 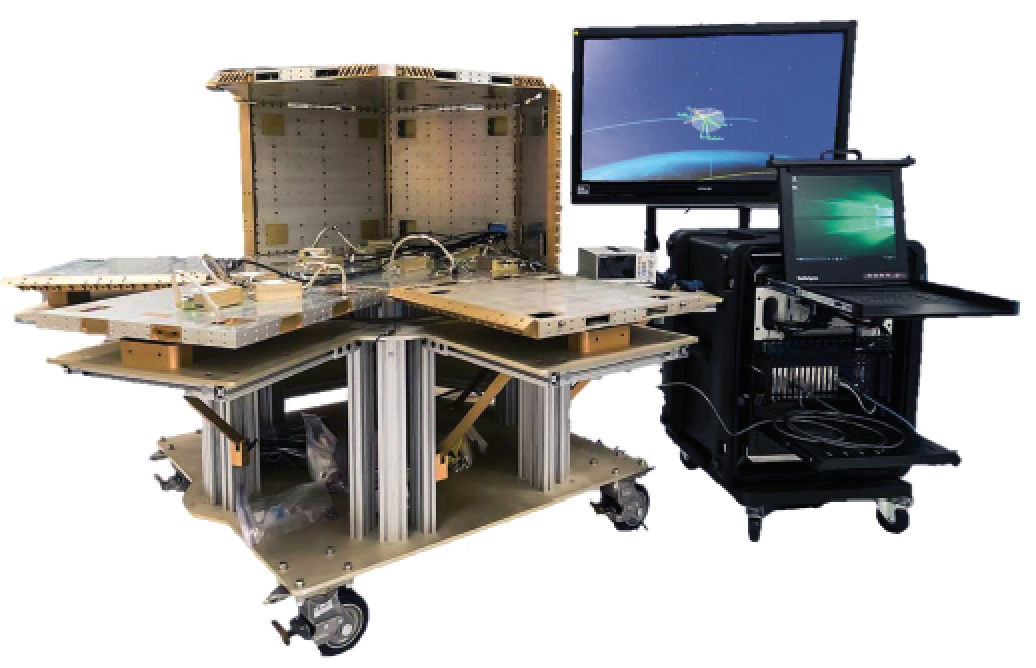