Before forming BFI, Simon Bax and Bill Tillson knew that if they were going to be a leader in this highly competitive field, every decision they made as a company would need to play a pivotal role in their overall strategy to increase the company’s footprint. To achieve this they knew that they would not only need multiple facilities, but they would also require a team of knowledgeable and forward thinking professionals.

The first step was the 2008 purchase of the Los Angeles-based Andrita Media Center, the largest third party HD/SD multi-channel network origination facility on the West Coast. As they focused on expanding the management team, adding digital media capabilities and growing the client base, another deal was already in the works and on January 15, 2010, the acquisition of Atlanta-based Crawford Communications was completed. The successful combination of these two industry leading companies not only meant that Bax and Tillson’s strategy was paying off, but it also provided an opportunity to make a name change reflective of their commitment to this expansion.

“We immediately recognized the natural fit between the two companies as the facilities and management teams both complemented each other in a myriad of ways,” says Bax. “A growing need for disaster recovery was something that became evident while we were developing our corporate strategy. These sister facilities enable us to position our company within the industry as a company capable of providing a full complement of services to our clients.”

Each facility was individually respected in the broadcast community for their turnkey media services to television networks, station groups, corporations and government entities. Uniting as Encompass Digital Media, the company builds momentum for even greater growth and expansion of capabilities.

“This unprecedented combination of talent and resources allows us to vastly expand our footprint in the marketplace and maximizes our ability to provide a broad range of services to our clients,” says COO and President Bill Tillson. “We have integrated a client business solutions’ team to support internal operations and ensure client satisfaction. This team enhances our ability to provide creative and cost-effective solutions to meet the needs of our clients and this is a key component to our corporate philosophy and ultimately our success.” 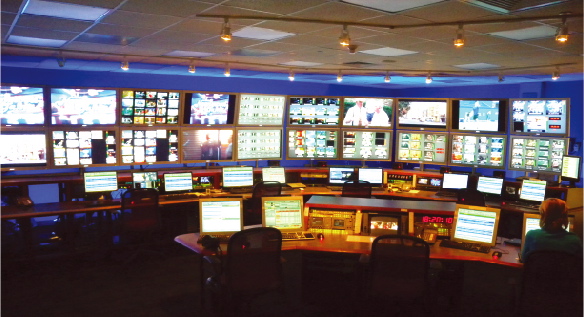 The industry has taken notice of their results as well. Encompass is the winner of the World Teleport Association’s 2010 World Teleport of the Year Award. The company’s achievements over the last year include new central casting services, the origination of local television stations from a centralized location; the launch of more than 40 TV channels; expansion of its Teleport capabilities; upgrades to its transportable fleet; material growth in digital media services; and increased support for government SATCOM.

While network origination continues to be the heart of what Encompass does, the company intends to further expand its digital media divisions in Los Angeles and Atlanta. Currently, Encompass creates over 15,000 files a month in Los Angeles for digital distribution on VOD, mobile, iTunes and other major platforms including fully supporting operations for Vudu.

Also setting the company apart is Encompass’ transportable and teleport businesses, which it plans to aggressively grow over the next 12-14 months. To further support these service areas, the company’s TOC will undergo complete, state-of-the-art upgrades for increased transmissions via occasional-use and full-time bookings as well as its satellite uplink trucks.

Beyond the U.S., Encompass’ road map includes facilities in Europe and Asia. These future plans will benefit clients with an even larger satellite and fiber network footprint enabling the movement of their media anywhere in the world.