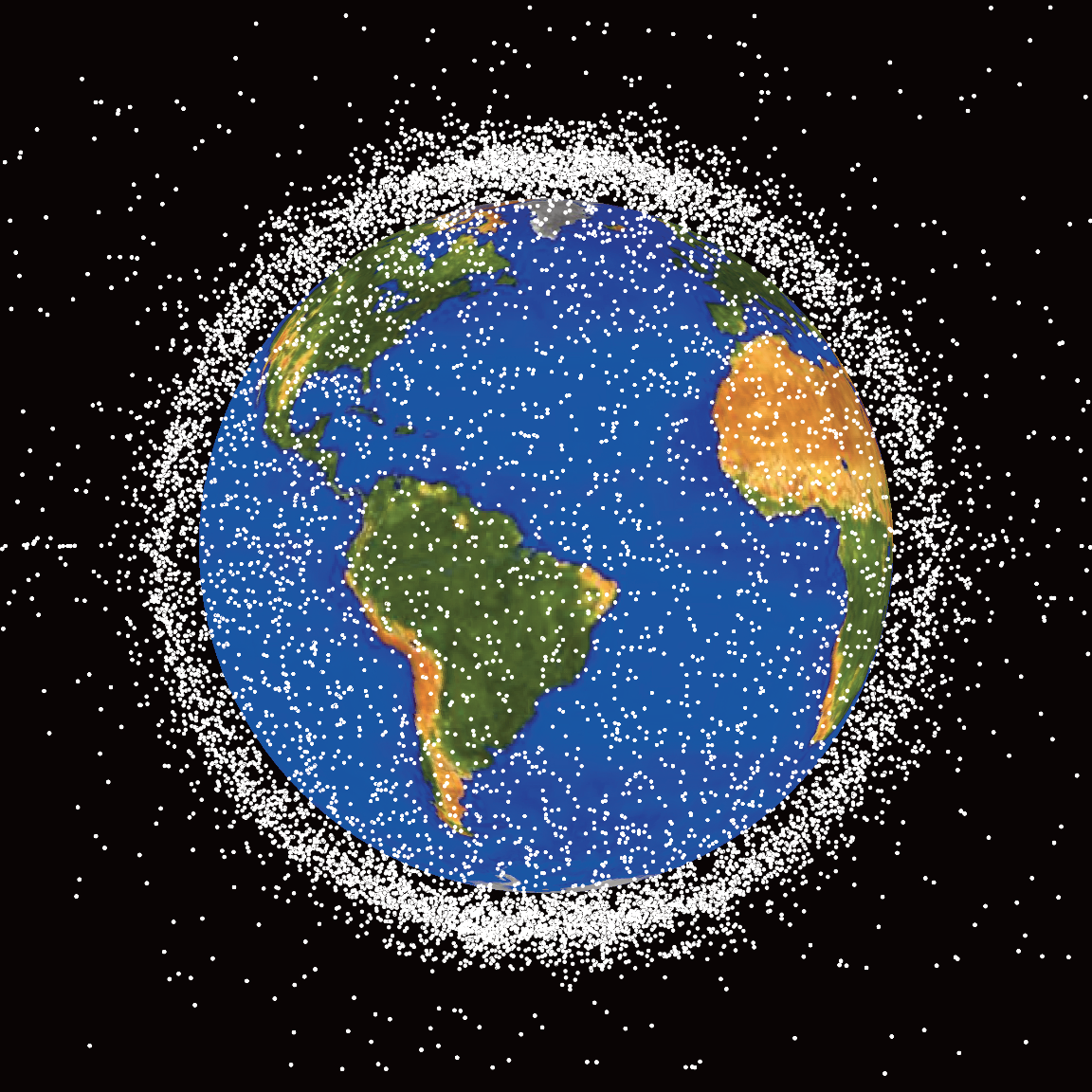 This NASA illustration shows the accumulation of space objects in low Earth orbit that are currently being tracked. About 95% of the objects illustrated are debris. The dots are not scaled to Earth but provide visualization of where the greatest debris fields lie. Thousands of objects are Image is courtesy of NASA.

Relative to the vastness of space, the near collision was frighteningly close.

On January 29, 2020, a decommissioned U.S. space telescope and a U.S. experimental payload were hurtling toward one another over Pittsburgh1,2 — the closer they drew, the probability of collision increased from 1 in 1,000 to 1 in 20. By some calculations, the two objects passed within 18 meters — 59 feet — of each other.

Some experts predict that had the two objects collided, at a relative speed of almost 33,000 miles per hour, they could have created a debris cloud of up to 15,000 debris objects — one of the largest such events in the history of spaceflight, Kevin O’Connell, Director of the Office of Space Commerce, testified at a U.S. Senate hearing in February.

In the same hearing, Dr. Moriba Jah, an Associate Professor and Aerospace Engineer at the University of Texas at Austin, explained that months earlier, in September of 2019, the European Space Agency had to maneuver one of its satellites out of the way of a SpaceX Starlink satellite3. ESA reported that was the first time they had to use a collision avoidance maneuver to protect one of their spacecraft from a satellite in a large constellation4. 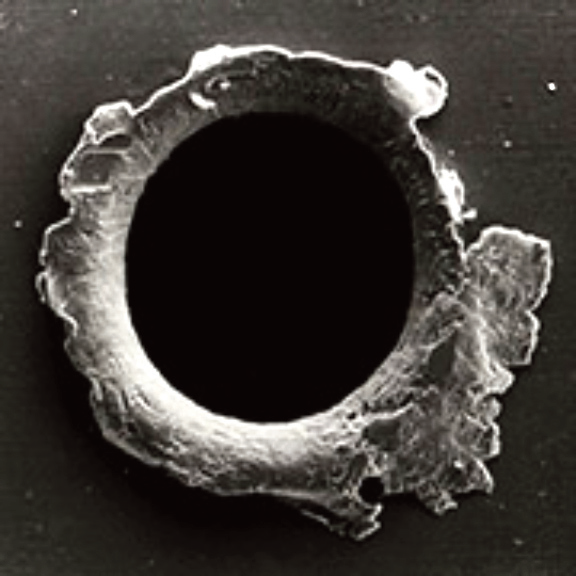 View of an orbital debris hole made in the panel of the Solar Max
experiment. Similar impacts have damaged the Hubble telescope
antenna dish, cracked windows and pelted other spacecraft equipment.
Image is courtesy of NASA.

“Do we want to be ‘playing chicken’ in our orbital commons?” Jah asked senators. “We have no rules of the road for space. The world’s space debris experts agree that there is a very high rate of noncompliance with space debris mitigation guidelines. It’s common practice to operate satellites long past their intended safe and useful lifespan. Last but not least, the global astronomy community has taken issue with the exponential growth of resident space objects as these ‘corrupt’ their astronomical images and negatively impact the science. Humanity as a whole is left to suffer the consequences of these behaviors.”

As space debris piles up, the risk of disruption to life on Earth increases. If satellites are destroyed or knocked from orbit, human users face a loss of internet and cellphone use, of navigation, of severe weather forecasting, and a range of other Earth Observation (EO) functions that support everyone’s daily lives. There is also the potential for loss of human life if debris were to collide with a space launch vehicle or the International Space Station.

“Space debris,” O’Connell told the senators, “is the ‘speed bump’ on the path to the trillion-dollar space economy.” In the January near miss, the telescope had launched in 1983. The experimental payload was a 1967 launch.

As launch costs and satellite development costs have shrunk, the opportunities in space are growing—and LEO will only become more crowded. SpaceX and Europe’s Arianespace plan more than 20 launches each this year. China is planning more than 40. Many of these launches are designed to release more than 20 satellites. Over the next decade, three American companies alone have applied for licenses to launch more than 57,000 satellites6. The more on-orbit satellites there are, the more objects to track and, potentially, to maneuver around.

Glenn Peterson, a researcher at the Aerospace Corporation, calculated the effect of introducing thousands of new satellites into LEO. He presented his findings at the 69th International Astronautical Congress in Bremen, Germany, in 2018. If all the mega-constellations launched, Peterson found, current tracking technologies would generate more than 67,000 “collision alerts” annually7. At the Space Foundation’s State of Space 2020 in Washington, D.C., in February, space debris was part of a panel discussion about U.S. economic security. Charity Weeden, Vice President of global space policy for Astroscale U.S. Inc., said there are effectively two markets for orbital cleanup and management — space operators with constellations of satellites and world governments with space operations that over decades have contributed to space debris8.

However, the implications, she said, are global. “We all pay if we do nothing,” she said. 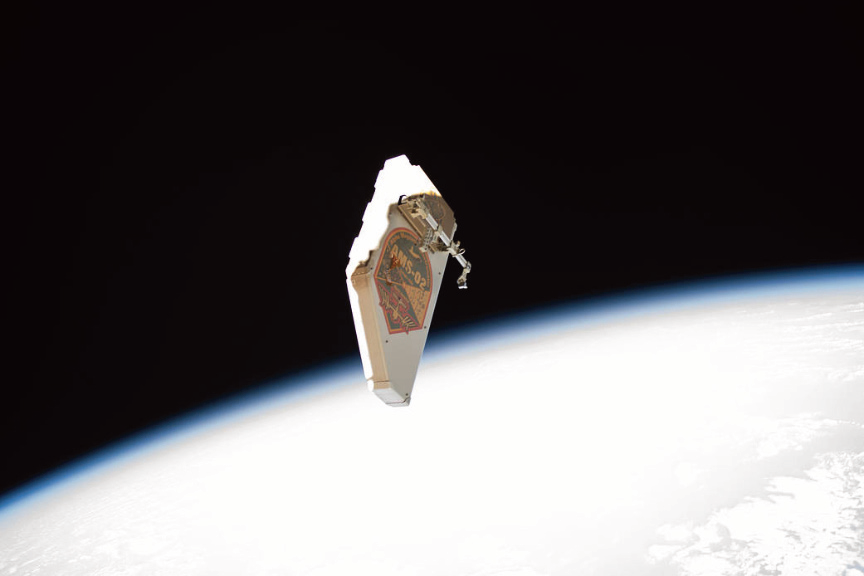 A debris shield removed from the Alpha Magnetic Spectrometer (AMS), the International Space Station's cosmic particle detector, is pictured drifting away from the orbiting lab in November 2019 after spacewalkers jettisoned it. The debris shield was detached to begin the repairs of the AMS thermal control system. Image is courtesy of NASA.

In the U.S., President Trump in 2018 signed Space Policy Directive- 3, which focused on updating the U.S. space traffic management system. Primarily, the directive transfers responsibility for maintaining a public catalog of all objects in Earth’s orbit from the DoD to the Department of Commerce9.

Both the DoD and NASA’s Orbital Debris Office share data about objects in space. The Orbital Debris program also calculates risks to humans on Earth from rocket bodies and spacecraft reentering the atmosphere.

For FY2021, the Commerce Department is requesting permission to merge budgets for the Office of Space Commerce and the Office of Commercial Remote Sensing and Regulatory Affairs, a total of $4.1 million, and adding $10.9 million for a total of $15 million. The number of personnel positions would increase from 11 to 2410.

U.S. companies also are taking on greater roles in traffic management, with a concentration of firms developing in Colorado Springs. LeoLabs, a Silicon Valley company, has opened an office at that location, and Numerica Corp. and Bluestaq are both based there, as well. All are working with the U.S. military to develop space-scanning technologies11. LeoLabs, which provided the alert about the January incident, touts its ability to track bolt-sized objects in space12.

Astroscale, a Japanese-based company with offices in the U.S., UK and Singapore, has started construction on a prototype spacecraft that will test space junk removal technologies. The company announced in October they intend to launch the prototype on a Soyuz rocket late this year13. Astroscale was also awarded a US$4.5 million grant from the Tokyo Metropolitan Government to build a roadmap for commercializing debris removal services14.

ESA in December commissioned their first space debris removal mission to the Swiss startup ClearSpace. Named ClearSpace-1, this mission is set for 2025 and will grab an unwanted VESPA satellite using four robotic arms, then place that satellite back in the atmosphere where the 100-kilogram (220 pound) object will disintegrate15.

The Russian Academy of Sciences last year hosted a space debris conference. Among the proposals presented were a “space lasso” to pull debris out of Earth’s orbit and installing lasers on the ISS to pulverize debris16.

China, too, sees potential in lasers. Researchers from the Information and Navigation College at China’s Air Force Engineering University and the Institute of China Electronic Equipment System Engineering Company in 2018 wrote they had conducted numerical simulations showing that a space-based laser provided a high degree of debris removal. China in 2007 created more than 3,000 bits of fragmented debris — the largest debris field ever tracked — following an anti-satellite missile test17.

While these international efforts are signs of progress, there is still no international platform to organize or monitor space traffic. When ESA needed to alert SpaceX of the feared collision, it did so by email. Even if an email is received, there is no obligation to answer, nor is there protocol for what a country or company has to do.

“Imagine how dangerous sailing the high seas would be if all the ships ever lost in history were still drifting on top of the water,” said Jan Wörner, ESA Director-General in a briefing about the ClearSpace mission. “That is the current situation in orbit, and it cannot be allowed to continue.”18 References

2No Satellite Crash: 2 Pieces of Space Junk Whiz Safely by Each Other Over Pittsburgh, space.com, Jan. 30, 2020. https://www.space.com/no-satellite-crash-of-space-junk-irasggse- 4.html

7Why Satellite Mega-Constellations are a Threat to the Future of Space, MIT Technology Review, March 29, 2019. https://www.technologyreview.com/2019/03/29/136268/whysatellite- mega-constellations-are-a-massive-threat-to-safety-in-space/

Lesley Conn is the Senior Manager of Research & Analysis for the Space Foundation and is based in Colorado Springs, Colorado.