Ten years ago, a weatherman’s best friend was launched and on-orbit has delivered unprecedented data about the Earth’s climate, water cycle and much more. Aqua is one of the primary satellites in NASA’s Earth Observing System (EOS), designed to help scientists understand the Earth and make more accurate weather and climate predictions. 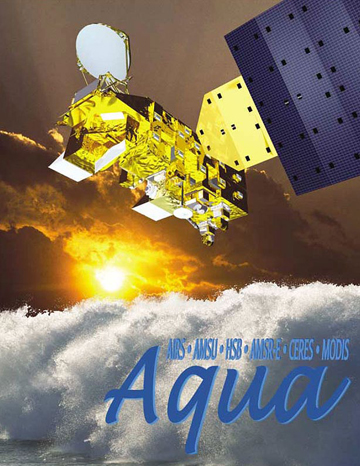 On May 4, 2002, the Northrop Grumman-built satellite Aqua lifted off from Vandenberg Air Force Base, California, and began a new era in NASA’s space-based observation of the Earth’s water systems.

Designed for a six-year mission, Aqua has already extended that by four years, with four of its six onboard Earth-observing instruments still downloading data. Those data have answered a multitude of scientific questions about water processes in the atmosphere, on land and in the oceans.

Aqua had a flawless launch and deployment in important part due to the discipline and dedication of Northrop Grumman’s satellite Integration and Test (I&T) team.

“Like a doctor in an operating room, I&T is responsible for the patient living or dying and must operate with urgency and an almost fanatical discipline,” said JoAnn Spolidoro, director, Aqua I&T. “That discipline was required for Aqua because it presented some huge challenges—the I&T process was scheduled for sixteen months but actually took about 31 months. To successfully launch Aqua, we needed to bring together several complicated elements: the flight software had to be tested and validated; the command and telemetry database and the harness had to be refined and tested. And the communications network had to make sure the components all talked to each other correctly. To meet these challenges, we forged a common vision for the Aqua team and focused on our successes. This team worked long hours and weekends throughout I&T to ensure a more than perfect on-orbit performance for Aqua.” 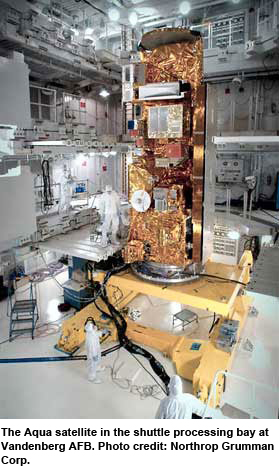 During this mission, the Northrop Grumman team also developed an especially strong partnership with NASA. One example was an early request from Goddard’s system manager to tailor the spacecraft’s communications design to relay an emergency broadcast. The TDRS spacecraft would detect the broadcast and then notify the appropriate satellite control center. The payload instruments, including the two CERES instruments Northrop Grumman provided, were developed around this concept as well. This came to be called the 911 broadcast, which was tested extensively and performed well during flight rehearsals.

Then came launch. All was going smoothly until the satellite controller notified the team that Aqua was emitting the 911 broadcast. The team all jumped from their seats to man their consoles. The spacecraft had gone into survival mode and was safely transitioning itself to sun point mode. The anomaly came as the bus was exiting eclipse and a cloud on the horizon blocked the sun. Not only did the fault management system and 911 broadcast work properly, but its development and implementation had no appreciable effect on cost or schedule.

Aqua makes measurements of the Earth at the same time, all the time. This is because the satellite orbits the planet on a nearly polar route, passing over different points on the ground at approximately 1:30 p.m. and 1:30 a.m. By maintaining a consistent time for taking readings, the integrated suite of sensors on Aqua facilitates sophisticated measurements of planetary processes that until now have been challenging to collect and calibrate.

Aqua’s scientific hardware is used to study climate change, vegetation, water vapor in the atmosphere, clouds, precipitation, soil moisture, sea ice, land ice, snow cover and more. Its six instruments are designed to work together as well as separately in order to study the Earth’s processes in the same way those processes operate—as a system.

“We are thrilled with the success of the Aqua mission so far, especially the widespread use of the Aqua data both for advancing Earth sciences and for practical applications,” said Claire Parkinson, Aqua project scientist, NASA Goddard Space Flight Center. 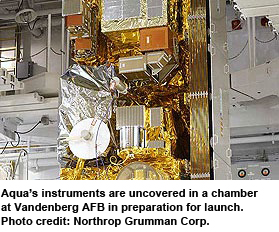 Parkinson continued, “In recent years, the number of science publications using Aqua data has exceeded 700 per year and the number of citations to Aqua publications has exceeded 10,000 per year. Some of the key near-real-time applied uses of the Aqua data are their use in weather forecasting, in monitoring such events as forest fires and hurricanes, in monitoring volcanic ash, with its impact on air traffic, and in air-quality analyses. All of these add to the value of the mission and are thrilling for many of the people who have worked hard to make the mission a success.”

Aqua’s instruments include the Atmospheric Infrared Sounder (AIRS) and the Advanced Microwave Sounding Unit (AMSU).These enabled scientists to build the first global map of mid-troposphere carbon dioxide. The troposphere starts at the Earth’s surface and extends 8 to 14.5km high (5 to 9 miles). Aqua’s measurements are so accurate that scientists can detect C02 to plus or minus 1.2ppm (parts per million) and they can measure it from day to day to construct dynamic maps. Together, AIRS and AMSU also monitor air temperature and water vapor to generate higher quality data meteorologists use to forecast from one to six days, far more accurately than before.

During the long polar night, AIRS and AMSU are able to monitor the ozone hole in the Antarctic. Another Northrop Grumman-built NASA satellite, the Total Ozone Mapping Spectrometer – Earth Probe, measures ultraviolet light from the sun. Scientists can now combine these two data products and construct a total ozone map. 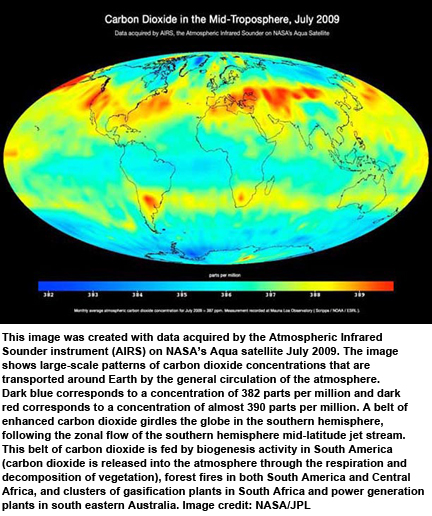 The Advanced Microwave Scanning Radiometer for the Earth Observing System (AMSR-E) can monitor sea surface temperatures even in the presence of cloud cover. As a hurricane passes over the ocean surface, it churns up the water underneath and leaves a cold wake, which AMSR-E can detect. In the buildup and aftermath of Katrina, animation from AMSR-E data products appeared extensively in TV news. During the active 2008 hurricane season, AMSR-E tracked Hurricanes Dolly, Ike and Gustav, which all made landfall in the U.S.

AMSR-E provides a higher resolution look at sea ice in the Arctic and Antarctic, seeing passages between floes and detecting the retreat of the Arctic ice and associated climate changes.

The Moderate-Resolution Imaging Spectroradiometer (MODIS) measures ocean, land and atmospheric processes. MODIS measures visible and infrared light in 36 distinct bands. In other words, it views the world in 36 colors. MODIS is not helpless at night, either. The dramatic reduction in visible light when the planet turns away from the Sun does not curtail the instrument’s ability to collect data of other wavelengths. These measurements are used to generate scientific products about land surface cover, vegetation, phytoplankton in the oceans, fires on land, sea ice cover, snow cover on land, and properties of clouds and aerosols in the atmosphere. 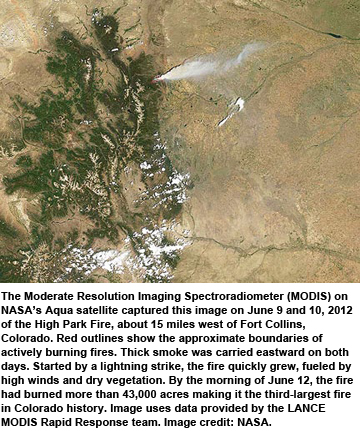 MODIS provides important forest fire data to the U.S. Forest Service, which uses the direct broadcast capability on the spacecraft to access the information and deploy firefighters. MODIS also pinpoints the location of volcanic plumes and ash for aircraft pilots and tracks the location of dust storms in the Middle East.

By studying how clouds function in relation to the larger planet, scientists can develop improved predictive models about weather systems and how the Earth maintains its delicate temperature balance. The first CERES instrument went into space aboard the TRMM satellite, launched in 1997. Designed to study rainfall in the tropics, TRMM successfully showed how an instrument of this kind could provide valuable data for weather and climate related research. The second and third CERES instruments launched onboard the Terra platform in 1999; Aqua enables the fourth and fifth of these to fly above the Earth.

There was a sixth Aqua instrument, the Humidity Sounder for Brazil, which failed in February 2003, but other instruments were configured to provide scientists with the needed data products.

In the last 10 years, Aqua has led to a deeper understanding of short and long-term climate change, critical to understanding our planet and its living, breathing systems.

About the author
JoAnn Spolidoro is the Director, Satellite Integration and Test for Northrop Grumman..