Enabling consumers to watch popular, live video content and television channels on their personal electronic devices (PEDs), whether at home or on-the-go, has been a major goal for all video content providers during the last decade, and Direct-to-Home (DTH) satellite video operators are no exception.

In the late 2000s, these operators began to devise how they could ensure their live TV channels could also be watched on the new smartphone and tablet device categories that consumers were starting to embrace, and which were predicted to deploy exponentially, unleashing new video consumption modes. 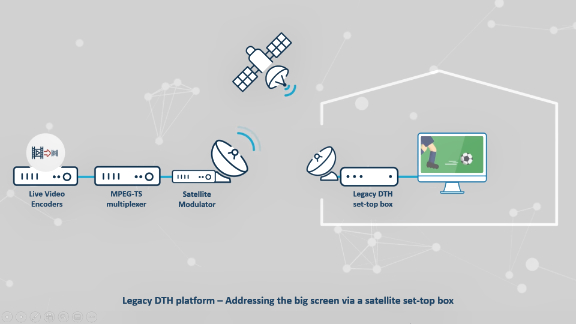 The First Steps
Ten years ago, the challenge was immense. On the one hand, satellite video platforms were (and still are) relying on mature and largely deployed broadcast technologies based on the MPEG transport stream (MPEG-TS) packaging layer, along with legacy conditional access content protection solutions (CAS). These technologies were developed in the mid-‘90s for digital video delivery over one-way, broadcast-quality networks and integrated in bespoke set-top boxes (STBs) massively deployed since then in consumer homes.

Since then, these two different video content distribution technologies have coexisted in their own silos, the former offering superior quality for live broadcast video distribution over managed delivery networks (cable, satellite, terrestrial broadcast, telco) to operator-controlled boxes, and the latter fueling the Over-The-Top (OTT) unicast video distribution model, leveraging any type of managed or unmanaged delivery network (such as the open internet) and adapting to low- and varying-transmission bandwidth conditions.

During the same period, the massive deployment of smart TV sets in consumer homes, now reaching 50 percent or higher penetration rate in all developed economies, created another market shift. Similar to other PEDs, smart TVs have been designed from day one to receive and display online OTT video content. How, then, could DTH content providers bridge the gap and leverage these PEDs that consumers were, and still are, very fond of?

The first hurdle was (and still is) that these PEDs do not include any satellite reception interface, nor do they include the necessary hardware provisions to descramble the protected video content that originates from DTH platforms and their legacy CAS encryption. The

initial industry response to this challenge was to develop sophisticated (and expensive) satellite video gateway devices that receive the original DTH television channels and process them such that they are made compatible for distribution to the PEDs over the consumer’s Wi-Fi network.

This process involves transport stream demultiplexing, content decryption, content re-protection (such that is it compatible with a DRM-based decryption method supported by the PED), and stream repackaging for IP distribution over Wi-Fi. This has led to the development of SAT>IP, a dedicated interface specification document that equipment vendors could leverage to design satellite gateway products.

The second hurdle was that the OTT video player applications running on these PEDs do not natively support the MPEG-TS audio/video packaging format used by DTH platforms. This has been addressed by developing custom-made player applications that cater to this DTH transport format. However, the complexity and cost of developing, bringing to consumers, and maintaining such complex satellite gateways and bespoke applications have been so prohibitive, and broadband penetration has improved so much, that most satellite content providers have discontinued this investment and decided instead to set up complementary video streaming platforms, leveraging the OTT distribution model to deliver live and on-demand video services to their customer’s PEDs. 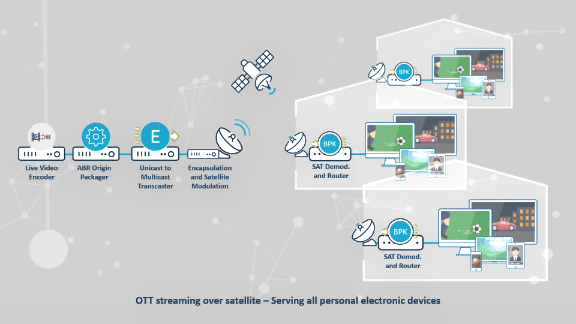 Adulthood
Then, how can live TV content be delivered straight to PEDs over satellite? As these consumer-owned devices are friendly to ABR streaming, the easiest and less expensive way is to wrap ABR-packaged and DRM-protected live video content, produced in the cloud or at the satellite headend, into a multicast ABR (mABR) IP stream that is then properly encapsulated — using MPE or GSE encapsulation protocols, for example — prior to DVB-S or DVB-S2 satellite modulation.

At the satellite reception place, a simple and inexpensive satellite receiver demodulates, de-encapsulates, and unwraps the mABR live TV services that can then be delivered straight to consumer-owned devices across the local (Wi-Fi) network as if the live video service was originating directly from the OTT platform.

This is exactly what Broadpeak’s nanoCDN™ for satellite solution does, and the benefits of combining satellite delivery with mABR packaging instead of MPEG-TS are vast: Any standard HLS- or DASH-compliant device can access the live content. Such devices include tablets and smartphones, as well as STBs, smart TVs, Chromecast dongles, Apple TVs, PCs, and game consoles.

Satellite distribution can benefit from adaptive bitrate technology capabilities, including de-linearization (i.e., catch-up TV, VOD) without the need for a hard drive, as well as content personalization such as regionalization or targeted advertisement. A regular DRM solution can be used to protect the content all the way to the display device, without the need for transcrypting content.

As the satellite segment is a managed network, very low latency, similar to traditional DTH broadcast, can be achieved, and video quality is predictable and fully controlled through satellite bandwidth provisioning. Because of its broadcast nature, there are no peak hour service limitations. Thanks to the use of ABR protocols, Broadpeak’s nanoCDN solution can seamlessly switch from satellite to broadband and back. The seamless fallback to unicast is interesting to secure continuity of service in case of loss of the satellite reception (e.g., during rain fades).

However, it’s also possible, and actually quite logical, to configure only the most popular channels to be distributed over satellite while the long-tail channels, generating only a few concurrent connections at a given time, are only sent over broadband. Most importantly, mABR over satellite provides a fully controlled capacity and pricing model.

Applications of live ABR video delivery via satellite are numerous, spanning from multiscreen consumption of satellite pay-TV content at home, to e-learning in remote places, as well as distribution to communities, hospitalities, cruise ships, planes, and many more.

A few months ago, Broadpeak announced the successful launch of a nanoCDN-based complete solution for delivering IP-native live TV channels via satellite to budget hotels, buses, and campuses, leveraging a “bring your own device” model.

Further evidence of the maturity of nanoCDN technology is the recent decision by Broadpeak’s longtime partner Eutelsat to blend SmartBeam into its CIRRUS™ hybrid satellite-OTT video delivery solution, addressing the growing number of IP-native screens to offer rich video content and a high-quality user experience. Eutelsat CIRRUS leverages ubiquitous coverage of satellites to help broadcasters and pay-TV operators create a network that is completely dedicated to IP-native terminals, including tablets and smartphones. The solution can be deployed at home as well as in public venues, such as hotels, bars, shopping centers, and airports.

The Final Steps
mABR streaming over satellite allows operators and content providers to contain their bandwidth requirements to only a few megabits per second in order to multicast high-quality live TV services to millions of simultaneous devices. By effectively managing video consumption peaks that are not supported by terrestrial broadband network infrastructures, mABR streaming is poised to become the natural successor to the 25-year-old MPEG-TS transport layer, and this revolution is underway, making the maintenance of two different video production and distribution platforms unnecessary. In the same way that ATSC 3.0 defines a new link layer protocol to natively support IP video services, people familiar with the matter will have noticed that DVB have recently launched a new TM-MCAST working group.

Created in January 2020 following the dissolution of the TM-IPI group, TM-MCAST is responsible for the development and maintenance of DVB’s mABR specification. It also has responsibility for maintenance of the Generic Stream Encapsulation specification and any future work on native IP specifications. Because mABR streaming is IP-based, delivering live video content and TV channels over satellite broadband (e.g., VSAT) with all the benefits mentioned earlier is also possible, driving new applications and revenue opportunities in the maritime, enterprise and government segments.

Additional information on the multi-award winning OTT streaming solution for satellite from Broadpeak is available at broadpeak.tv/solutions/multicast-abr-for-live-ott/.