In response to the threat posed by USSR long range missiles, in 1954 the U.S. Air Force initiated the development of a tactical ballistic missile. This missile would be capable of delivering a nuclear warhead over a distance between 1,850 and 3,700 km, a range that would allow Moscow to be attacked from a launch site in the United Kingdom. 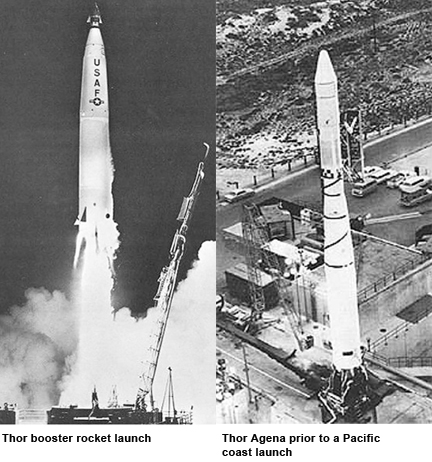 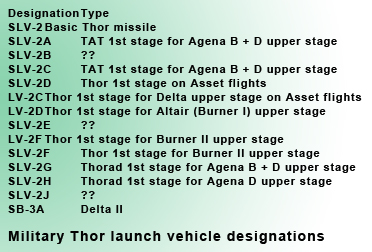 This was a single-stage missile with a length of 18.40m and was powered by a single Rocketdyne LR79-NA-7 engine fueled by Lox and kerosene, providing a thrust of 758,7387N. The first successful flight of a Thor missile occurred on September 20, 1957.

Within three years, the first of 60 missiles were deployed in the United Kingdom as part of the Royal Air Force. The missiles were based at above-ground launch sites and a missile could be launched within 15 minutes. Ten minutes into its flight the missile would have reached an altitude of 450 km, and after 18 minutes, it would impact its target.

A total of 224 missiles, designated initially as SM-75 and later as PGM-17, were constructed. Of these, 64 were used for test flights, including training flights. There were 12 launch failures. The majority of these flights were from Cape Canaveral, while a few took place from Vandenberg. No missiles were launched from their bases in the United Kingdom. 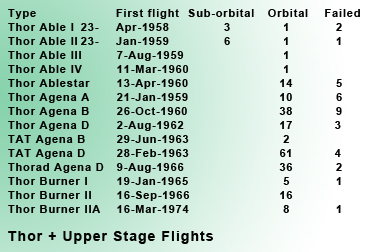 These surplus vehicles became a ready source for sub-orbital programs of a scientific and technological nature. There were eight launches in the Dominic program between May 2, 1962, and November 1, 1962 — all were conducted from Johnstone Island. Also flown from Johnstone Island were 13 anti-satellite tests between February 14, 1964, and November 12, 1968. Six flights from Cape Canaveral in the Asset program were conducted between September 18, 1963, and February 23, 1965.

Although the basic Thor missile (also identified as DM-18) was never used for space launches, it was combined with various other upper stages to produce a number of variants that allowed the surplus missiles to be used as space launch vehicles. New first stages were constructed when the stock of surplus missiles was depleted. The various variants were: 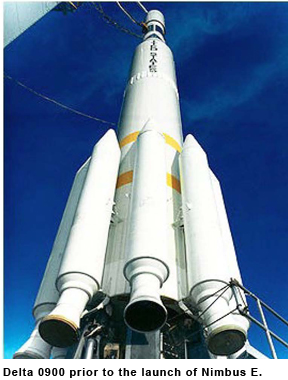 Thor Able
The Thor missile was mated with the Able two stage upper stage, which was built by Space General and was originally used for the Vanguard launch vehicle. The first stage of the Able was powered by an Aerojet AJ-101 engine and the second stage by an ABL X-248 Altair engine.

Thor Agena
Originally known as Hustler after the Bell motor, the Agena upper stage, was developed by Lockheed and included a Bell liquid fueled motor. It was fitted with the basic Thor first-stage to create the Thor Agena A, Thor Agena B and Thor Agena D combinations, while the upper stage was also combined with the improved developments incorporated into the Thor first-stage. This resulted in the Thrust Augmented TAT Agena B, TAT Agena D and Thorad Agena D versions. The TAT versions had three strap-on Thiokol Castor TX-345 solid boosters. 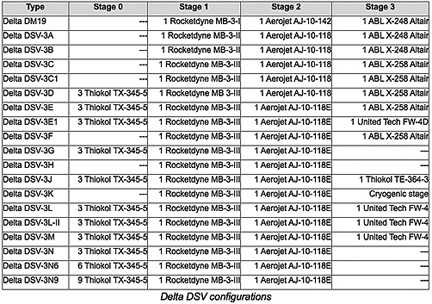 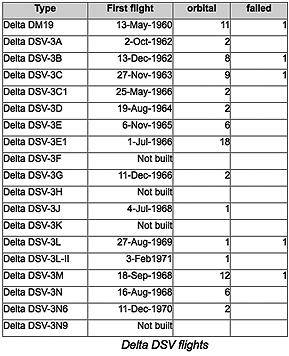 The final version of the Thor combined with an Agena D upper stage with the DSV-2L long tank first stage with either three, six, or nine solid fueled strap-on boosters. The combination has been referred to as Thorad-Agena D or Long Tank Thrust Augmented Thor (LTTAT)-Agena D.

Thor Burner
The Thor vehicle was also matched with the Altair upper stage as the Thor-Burner I, sometimes also referred to as Thor Altair. Further versions were the Thor Burner II and the Thor Burner IIA, which introduced an additional burner stage.

Delta Introduction
The Thor Delta series of launch vehicles was developed starting in April of 1959 by the Douglas Aircraft Corporation as an interim launch vehicle. It evolved, however, into a distinct series of launch vehicles known simply as Delta, which are still being used to this day and are expected to be further developed in the years to come. The current design has, however, little in common with the original Thor missile due to the continuous, incremental development process.

By combining the basic Thor first-stage and a number of its improvements, with a wide range of upper stages as well as solid boosters, the Delta launch vehicle is configured in a broad range of versions to accommodate specific payload requirements. The designation system is, to say the least, complicated — several changes in the designation systems have added to the vehicle’s complications.

The basic Thor Delta, or Delta DM19, consisted of a Thor first-stage with a second-stage propelled by an Aerojet AJ-10-142 liquid fuelled motor and a third stage with an Allegheny Ballistics Laboratory X-248 Altair.

The Delta DSV-3A, or Delta A, was similar to the basic Thor Delta vehicle but possessed a Rocketdyne MB-3-II first-stage motor as well as a second stage re-start capability. Subsequent versions differed in configurations, depending upon the launch requirement determined by the payloads to be carried. The various configurations are shown in the accompanying tables. 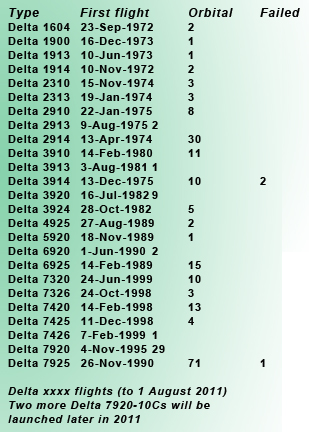 In the late 1990s, occasionally additional digits were added to the designation to indicate the diameter of the payload bay fairing in feet. There were 8’, 9.5’ and 10’ fairings. The 10’ fairing came in a 10 version (metal skin and stringer) a 10C (composite) as well as a 10L (lengthened composite) version.

Delta 3
In 1995, McDonnell Douglas proposed to enlarge the family of Delta launch vehicle with the introduction of the Delta 3. 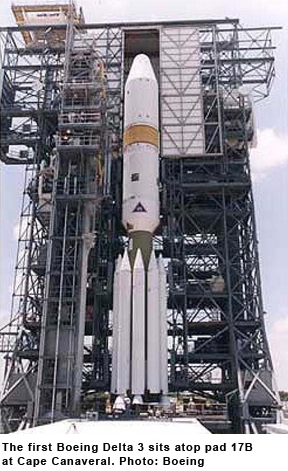 The Delta 3 used the Delta 2 first-stage in combination with a cryogenic upper stage powered by a Pratt & Whitney RL10B-2 engine. The basic version had nine strap-on solid fueled boosters built by Alliant Techsystems, of which six were ignited during the launch and another three during the flight. Other versions considered, but not built, carried three or six solid fueled strap-on boosters.

The Delta 3, also referred to as Delta 8930, was launched three times between August 26, 1998, and August 23, 2002, of which one failed, while the other two launches provided unacceptable results. A number of vehicles had been built to meet orders for 18 launches but, with the poor results and the Delta 4 coming into use, the remaining Delta 3s were scrapped and used as spares.

Delta 4
The Delta 4 was Boeing’s successful response to the U.S. Air Force’s Evolved Expendable Launch Vehicle (EELV) program. Initially intended also for the commercial market, the weakness of that market made Boeing decide to concentrate on the military market only.

In the Delta 4, the first stage of the Delta 3 was replaced with a new Common Booster Core, driven by a Boeing Rocketdyne RS-68 engine. This core is augmented with strap-ons and upper stages. The basic Delta 4 Medium version, also known as Delta 9040, has a 4m fairing and was capable of placing a 1300 kg payload into a geostationary orbit. The upper stage is powered by a Pratt & Whitney RL10B-2 engine. 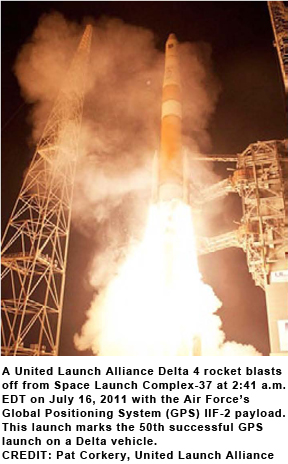 In the Delta 4 Heavy, also known as Delta 9250H, the two strap-on boosters are the same as the Common Booster Core stage.

There is also the proposed Delta 4 Small version which will consist of the Common Booster Core and the upper stage and, with a 3m fairing.

These new versions mean that the launch vehicle that evolved from the Thor missile will be around for quite some time to come...

About the author
Jos Heyman is the Managing Director of Tiros Space Information, a Western Australian consultancy specializing in the dissemination of information on the scientific exploration and commercial application of space for use by educational as well as commercial organisations. An accountant by profession, Jos is the editor of the TSI News Bulletin and is also a regular contributor to the British Interplanetary Society’s Spaceflight journal.