When a satellite is launched into space, there’s sometimes room on the rocket for a few mini satellites to hitch a ride, too. Adam Thurn, an Aerospace Engineer at the U.S. Naval Research Laboratory (NRL), has invented a nichrome burn wire mechanism for these CubeSats to deploy an object once in orbit. 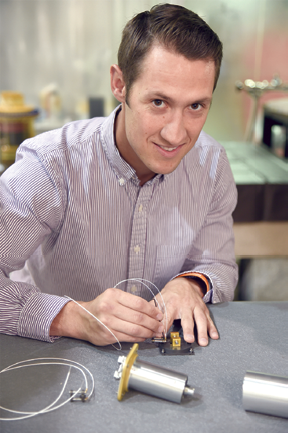 “This is developed as a low-cost, simple mechanism that would do different deployables on a satellite like that,” said Thurn. “We’ve done ones with solar arrays that are just on hinges and they come out. Another one we’ve done is tether deployment.”

About 10 years ago, universities started using the relatively low-cost CubeSats for student-led projects; several companies now offer CubeSat kits. “They’ve become more advanced as people have realized the cost benefits of them,” said Thurn. He points to a model on top of a bookcase near his desk. “A 3U CubeSat is about the size of a loaf of bread,” he said. However, “Dealing with tiny stuff is difficult,” he added.

A rocket launch is a prolonged, violent event. For decades, NRL has been figuring out how to tuck away the auxiliary pieces, such as solar panels, and engineer doors over instruments—then make everything come to life only when the satellite is safely in orbit.

With these new CubeSats, however, “You want to do all these deployables, but you start dealing with mechanisms and that gets complicated because you don’t have the necessary volume,” said Thurn. “Mechanisms tend to want to be a little bit bigger for their releases.” Additionally, it’s easier for electronics to overheat.

At a cost of $160 each, Thurn assembled 10 mechanisms himself for testing and has given a few away to universities. He used all commercial parts, except for two aluminum pieces he calls “saddles” and had them made at a local machine shop. “The idea was to make it cheap and easy to use and easy to build so that students at universities could replicate it,” he said. There are two steel rods or pins, “saddled” by two hard anodized pieces of aluminum with steel compression springs in between, and gold-plated ring terminals. 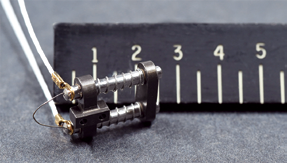 The key to deployment is a thin nichrome wire secured at the top of the pins with screws. “It’s the same wire found in your toaster,” said Thurn. When the spacecraft is in orbit and receives the command, “You send a controlled current through this wire and it heats up in vacuum to [about] 900 degrees Fahrenheit.” The wire burns through a cable, which releases the deployable(s) with the force from the springs.

Aside from providing universities with drawings of the mechanism, Thurn has also given away schematics so they, “Can make up their own bread board, or circuit board, or whatever it may be for their project.” He’s also designed it to work both in a vacuum and in air, using the same electronics. 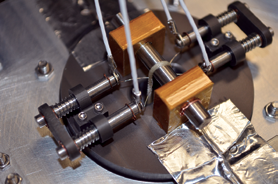 Shown are two burn wire release mechanisms, invented by Adam Thurn of the U.S. Naval Research Laboratory. They’re installed on the TEPCE satellite, which will deploy the stacer tether system when the nichrome burn wire is heated with 1.60 Amps and cuts through the Vectran tie down cord holding the two endmasses together. Photo: U.S. Naval Research Laboratory—Adam Thurn

“That was done because a lot of universities don’t have access to a vacuum chamber,” he said, “and so if you can test your mechanism and your deployable in the air, that’s hugely beneficial.”

Thurn developed this mechanism in six months while under a Karle’s Research Fellowship, after coming to NRL with an Aerospace Engineering degree from the University of Cincinnati.

“We changed a bunch of parameters [during testing] to figure out what was really important to the success and use of the mechanism, finding out that basically it’s driven by current and spring strength. And the other 20 parameters we were changing didn’t really matter, which is good, you only have to worry about a couple things then.” His design is now patent-pending.

NRL plans to use six of Thurn’s mechanisms for a mission slated to launch in early 2015, called Tether Electrodynamics Propulsion CubeSat Experiment (TEPCE). TEPCE will hitch a ride to the International Space Station, said Thurn, “And then the Dextre robotic arm on the space station grabs it and we deploy from there.” 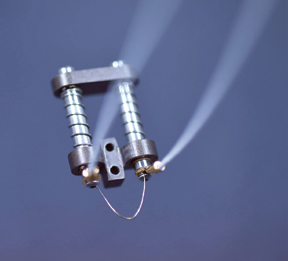 There’s a stacer spring in the middle of the CubeSat and, when the cord is burned by the nichrome mechanism, “That spring shoots out and we deploy a one kilometer tether between the two end masses of the satellite. So we split that satellite into two pieces.”

TEPCE preparations have been comprehensive-and creative. “To understand the tether deployment a little bit better, we actually dropped TEPCE from the ceiling and then, during free fall, we used one of these [mechanisms] to deploy the tether so it was in a near zero-[gravity] environment. And then we caught it in circus nets.”

By running current through the tether, NRL hopes to create a reaction with the Earth’s magnetic field that will change the orbit of the TEPCE satellite without using conventional fuel. “The main application would be to clear space debris,” says Thurn. “That’s the holy grail of what they’re trying to do.”

In addition to TEPCE, Thurn is now working on mechanisms for two spacecraft that will orbit the sun. “The mechanisms will deploy the door and then allow the telescopes to peek out over the heat shield and investigate solar activity.” The two programs are Solar Orbiter Heliospheric Imager (SoloHI) and Wide-field Imager for Solar Probe Plus (WISPR).

About the author
Kyra Wiens is a Public Affairs Specialist for the U.S. Naval Research Laboratory (NRL). She’s written about the lab’s achievements in alternative energy, biochemistry, space science, and more. She’s also an All American triathlete.