Nicholas Negroponte is a fellow Greek-American best known as the founder and Chairman Emeritus of Massachusetts Institute of Technology’s Media Lab, and, more recently, as the founder of the One Laptop per Child Association (OLPC). He is also recognized as a visionary who can aptly decipher telecom trends. 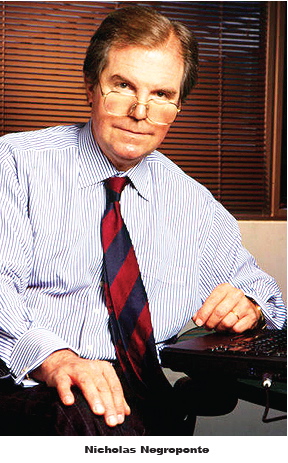 In the early 1990s, he suggested that signals at the time traveling by wireless methods (e.g., television) would soon be transported by landline technologies, and signals that historically traveled by landline methods (e.g., telephone) would soon be delivered wirelessly. George Gilder called this view the Negroponte Switch as it implies a reversal of traditional signal transport modes. Albeit challenged by the rise of direct broadcast satellite systems, this prediction correctly anticipated a great deal of the broad sweeping changes in the telecommunications landscape. At the very least, this universal and simple concept contained the seed of the global explosion of the mobile industry.

Almost 20 years after the Negroponte Switch was born, the wireless industry, with more than 90 percent cell phone penetration at the end of 2009, is now exploring new growth options as the penetration of voice services, which supported the spectacular wireless expansion, is now reaching a plateau, and voice-based income is falling rapidly. In short, where can new revenue come from? Is there an area replete with growth potential waiting to be tapped?

Machine-to-machine (M2M) communications is now viewed as such a frontier. What is it?

This is a technology that is pervasive and invades all kinds of venue of our daily lives.

As the Negroponte Switch announced a new era in telecommunications, it would not be farfetched to claim that, likewise, the shift to machine-based communications also has the same type of fundamental consequences. Without being too presumptuous, I would submit that we are currently witnessing the dawn of the M2M switch.

The ABCs of the mobile carrier business model is that 1) ARPU, i.e., average revenue per unit is high (voice, data and video); 2) Bandwidth consumption per user is high; and 3) Churn, in a very competitive market, is high.

According to data collected by research firm Strategy Analytics, in the second quarter of 2010, the top 10 U.S. wireless carriers posted blended ARPU ranging from $37.61 to $52.71. Regarding bandwidth, a June 2010 Nielsen study showed that average data consumption of smartphones increased from about 90 MB per month during the first quarter of 2009 to 298 MB per month during the first quarter of 2010. This data consumption is not evenly distributed, in addition, with about 23 percent smartphone penetration in the United States; the market is still in the early adopter phase.

However, we can very well imagine the network problems looming on the horizon for the wireless
carriers. Finally, monthly churn in the second quarter of 2010 ranged from 1.27 percent to 5.0 percent for the top 10 U.S. wireless carriers.

In comparison, the M2M market, deals with extremely different numbers. Depending on the application, ARPU is in the low single digit range, the need for bandwidth access is limited (the ‘bread and butter’ exception-based M2M solutions use only tens of kilobytes), and churn is an order of magnitude lower than what is observed in the traditional cellular market.

Therefore, the trade-off is to offset the income reduction with lower overall costs due to revenue stability and less congestion in the network. What makes this business model attractive is, of course, the often-quoted market dimension: There are about 10 times as many machines as people on this planet. Quite a potential, but also quite a shift!

Now, one tenth of the revenue becomes acceptable as bigger volume makes up for lower unit rates. Also, it is less costly riding the market growth than fighting for market share. An important catalyst of the M2M switch is the considerable decrease in cost of the modules, modems and other sensors, in a nutshell the technological paraphernalia vital to the capture of the events I mentioned earlier.

Tremendous improvements in price and miniaturization have been achieved in the RFID space. Satellite trackers, (2G) cellular modules and sensors have seen their prices dramatically reduced in the last couple of years.

In parallel, since the beginning of 2009, a global awareness of the imperative need for the M2M industry to work on standards to generate the economies of scale necessary to support the market expansion has led to several related initiatives on different continents.

The US Telecommunications Industry Association (TIA) has also launched a new engineering committee centered on Smart Device Communications (TIA TR-50). Incidentally, at Global Standards Collaboration 15 (GSC-15), which was held on August 30 to September 2, 2010, in Beijing and hosted by CCSA, the world’s leading telecommunications and radio standards organizations met to promote innovation and collaboration on a broad spectrum of standards topics, among which M2M has been identified as a “High Interest Subject”. 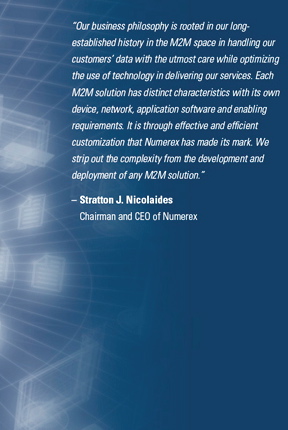 Well before Negroponte’s insightful prediction, another Greek thinker highlighted an elementary and yet powerful principle, which we must bring back into our M2M discussion.

“Give me a place to stand and I will move the Earth,” famously said Archimedes of Syracuse to underline the power of leverage. With a long enough arm and an appropriate fulcrum, a small force can lift a huge load. For the M2M switch to succeed to the fullest extent, or more precisely for the sizable market of machines around the world to be profitably exploited, the “force” of the above outlined “ABCs” must be applied to a suitable lever. 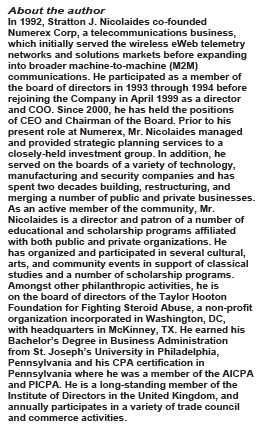 I would submit that the metaphorical lever that can efficiently take advantage of the ABCs and propel the M2M growth is the integration capabilities of the M2M service providers. The M2M ecosystem is a complex one and will remain so for the years to come. Process simplification, time-to-market acceleration, innovation fostering and through-and-through customer support are central to a powerful leverage of the ABCs. M2M end-to-end integrators with thorough knowledge of the intricate M2M value chain and able to provide smart, secure as well as network and technology-agnostic products and services can bridge the ABCs with the enormous M2M opportunities, transforming the appetite-whetting market potential into a financially attractive reality.