RUAG Space is the world’s leading provider of composite payload fairings. These structures form the nose cone of launch vehicles. They are designed to protect the fragile satellites they carry into space during the pre-launch and launch phases when they are exposed to high mechanical loads and extremely high temperatures due to frictional forces acting on the spacecraft as it passes through Earth’s atmosphere.

As a partner of the first hour, RUAG Space supplied the fairings for all Ariane launch vehicles. The company has since expanded this activity and now also builds nose cones for the smaller European Vega launcher and for the US Atlas V-500.

The first of the two new RUAG factories, being constructed in the Swiss town of Emmen, is due to open shortly. The first payload fairings will be produced there in 2016.

The second factory, which is also RUAG’s first production site in the US, is being built in Decatur, Alabama, in the immediate vicinity of America’s number-one space launch provider, United Launch Alliance (ULA). At present, fairings for the US American market are still manufactured in Switzerland.

As of mid-2017, RUAG will be able to supply ULA with products made on American soil in Decatur. In the first instance, the factory will produce the inter-stage adapter that links the main and upper stages of the Atlas V-400 rocket. Payload fairings for the Atlas V-500 will be added at a later date.

Further into the future, RUAG plans to use the under construction Alabama facility to manufacture carbon-fiber-reinforced components for the new ULA Vulcan launcher. 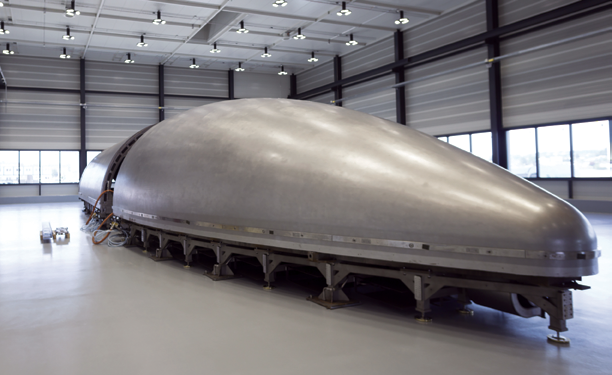 A 21 meter long mould is needed to build half shells for Ariane and Atlas-V in a single piece. Photo is courtesy of RUAG Space

Manual Processes Give Way To Automation
The two new production facilities will operate according to an entirely new, semi-automated process. This will enable RUAG Space to substantially reduce the manufacturing costs of its payload fairings and other structural components of launch vehicles, without compromising quality or reliability.

“It places us in an ideal position to consolidate our lead in the launch vehicle market, which is experiencing growing pressure on costs,” said RUAG Space CEO, Peter Guggenbach. “Cheaper access to space is an imperative that applies both in Europe and in the United States. But this can only be achieved if suppliers to the space industry automate their manufacturing processes.”

Each layer of this sandwich structure is laid down manually. The laminated shell elements are subsequently hardened in an autoclave, then inspected and finished by hand. They are then passed to a vertical integration station where they are assembled into two half shells of seven elements each, in a meticulous manual process. 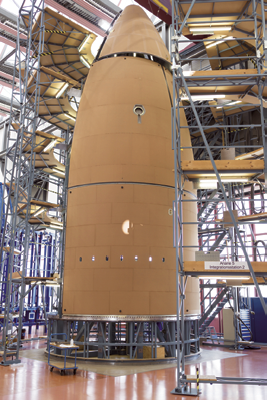 Today an Ariane Fairings is assembled into two half shells of seven elements each, in a meticulous manual process. Photo is courtesy of RUAG Space.

This vertical integration stage will no longer be necessary in the future. In the new production facilities, RUAG will be able to manufacture half shells for payload fairings with a length of up to 20 meters in a single piece, instead of assembling them from separate elements. A brand-new building with a surface area of more than 5000 m2 has been constructed for this purpose at the factory site in Emmen (see photo on next page).

An air-cushion transport system is used to move the payload fairing and the bonding mold, which measures 21 meters in length and weighs 55 metric tons, on to the next step in the process: hardening the sandwich structure.

This step no longer requires an autoclave—instead, the structure is hardened in a conventional industrial furnace at atmospheric pressure. This so-called out-of-autoclave method is the result of advances in carbon-fiber technology, particularly with respect to resins.

After hardening, the structure is inspected using a non-destructive inspection (NDI) procedure—an essential part of the product quality assurance process at RUAG Space. This inspection, which used to be performed manually, is now carried out by an industrial robot. 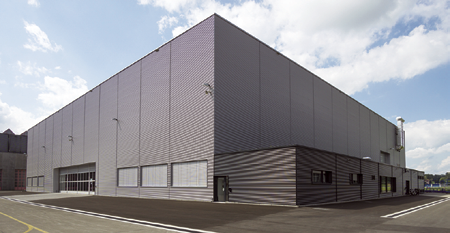 An outside view of the new RUAG Composite Center in Emmen, Switzerland. Photo is courtesy of RUAG Space.

The automated scanner supports the NDI specialists using air-coupled ultrasonic through transmission technology. The result is a C-scan image of the part, enabling convenient and reliable detection of defects. After inspection, the half shell is passed to a horizontal integration station.

The greatly simplified integration process now merely consists of trimming and deburring and drilling holes for mounting the fairing separation system and sealing rails. These tasks are all computer-controlled.

The next stage in the process is machining, which involves cutting and milling all of the necessary openings in the half-shell structure, the adhesive bonding of all inserts and frames to accommodate access panels and interfaces to ground systems and the launch vehicle, and then finishing the work on the thermal shield and sealing elements.

A special machining station was designed to facilitate these manual tasks by enabling the half shell to be rotated around its longitudinal axis, thereby providing more convenient access.

The finished half shell is then transferred to the paint shop, where a special white coating that provides thermal and electrostatic protection is applied. The final stage after painting involves installing various additional subsystems such as electrical wiring, instruments, an acoustic shield, the pyrotechnic ignition system and mission-specific access panels and devices.

The payload fairing is then ready for handover to the customer and shipment to the launch pad.
http://www.ruag.com/