In much the same way as for most of the current space launch vehicle, the Titan launch vehicle started life as a military missile. Intended as a back up for the Atlas ISBM missile, development was started in October 1955 when the Martin Company (which in 1995 merged with Lockheed to become Lockheed Martin) was awarded a contract for the airframe design. Towards the end of its military operational life, some of the missiles were refurbished as space launchers. Also, the missile formed the basis of a family of space launch vehicles. 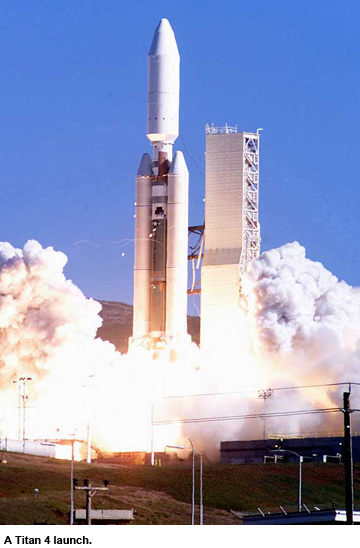 Titan As A Missile
In total, 163 Titan I missiles were built of which 62 were built as research and development vehicles identified as:

– Lot V: Four built—same as lot J with the exception of instrumentation and range safety equipment to be used for tests at Vandenberg

In addition 101 operational missiles were built as part of the SM lot.

A total of 54 operational Titan I’s were deployed at Lowry AFB (2 complexes), Mountain Home AFB, Beale AFB, Larson AFB and Ellsworth AFB. Each complex had nine missiles in three structures, each structure with three missiles each.

There was a test facility at Vandenberg while there were also test flights from Cape Canaveral. The first flight of a Titan I missile occurred on February 6, 1959, and 68 tests launches were conducted from Cape Canaveral as well as Vandenberg. Five of these launches have been identified as failures. The final launch was on March 5, 1965. 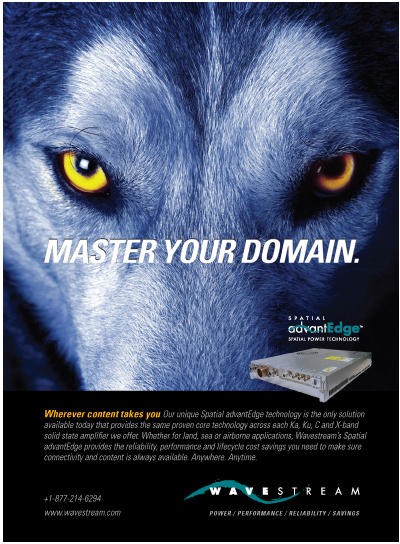 Although it was, at one stage, proposed to mate the Titan I with a Vanguard rocket as upper stages for lunar orbital and surface landing mission, the Titan I was not used for space launches.

Titan II, Missiles Used As Space Launchers
Although the Titan II was originally developed as a missile, it also had two careers as a space launch vehicle. In total, 141 of the missiles were built, of which 33 were for research and development purposes (identified as Lot N), while 108 operational missiles were built. A total of 54 operational Titan IIs were deployed in silos at Davis Monthan AFB, McConnell AFB and Little Rock AFB. Each site has 18 silos. There were also three silos at Vandenberg for test firings.

As a missile, the first launch occurred on March 16, 1962, and 81 flights were conducted until June 27, 1976. Of these flights, seven were considered as failures.

On September 5, 1988, the first surplus and refurbished Titan II missiles were used for a space launch. A total of 56 missiles were available for refurbishment, although only 14 missiles were refurbished, some of them using parts from several missiles. Only 13 were actually flown. 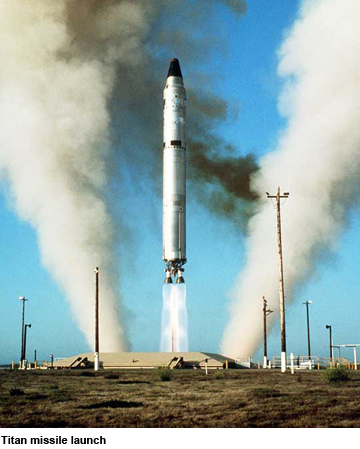 These refurbished missiles are sometimes referred to as Titan 2, Titan 2G, Titan 23G or Titan 2(23)G, while some of the launches carried an additional propulsion stage to place the satellite into a higher orbit. The refurbished launchers were capable of placing 2170kg payloads into low orbit.

Titan III, Dedicated Space Launchers
In 1962, the Titan IIIA (there was no Titan III, as such) was selected by the U.S. Air Force as its standard launch vehicle for military payloads. It differed from the Titan II by using a more powerful first and second stage as well as the addition of the Transtage as a third stage.

A further development was the Titan IIIB which used the Agena D upper stage instead of the Transtage. This combination is sometimes referred to as Titan III Agena D, while in the early 1970s designations such as Titan 3(23), Titan 3(24), Titan 3(33), Titan 3(34) and Titan 34B were also used.

The Titan IIIBAS2 was a mid-1960 proposal for a Titan IIIB with two strap-ons, a Centaur D/E third stage, and a Burner 2 fourth stage. It was to be used for deep space missions but development of this vehicle did not occur. 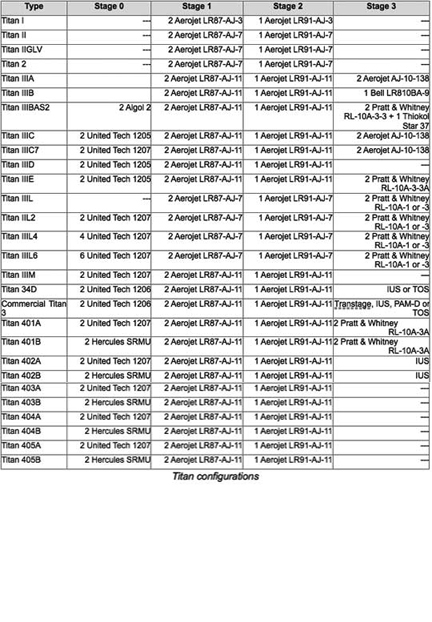 The next version was the Titan IIIC which was basically similar to the Titan IIIA but with the addition of two United Technologies 1205 solid fuelled boosters to the first stage. These provided a thrust of 5,849,620 N each. The boosters had a length of 25.90m and a diameter of 3.05m while the launch vehicle’s total length was 35.05m, depending on the payload carried.

The Titan IIIC7 was a 1965 proposal that would have used a lengthened Transtage third stage as well as upgraded solid boosters with a length of 34.10m. The version was not further developed.

The Titan IIID was similar to the Titan IIIC but with the deletion of the Transtage upper stage. It is, however, believed that some Titan IIID vehicles were used with an additional Agena D upper stage. In this configuration, the vehicle was capable of placing 12,300kg into a low orbit. It had a length of up to 48.76m, depending on the size of the payload carried. The vehicle was used 24 times between June 15, 1971, and August 28, 1985. Of these, one was a failure.

The Titan IIIE was built specifically for NASA as a launch vehicle for its deep space missions. The first two stages were identical to the Titan IIIC. On top of this was a third stage consisting of a Centaur D1T upper stage. This stage developed a thrust of 133,375 N. For the two Helios missions in 1974 and 1976, a further stage was added that was propelled by a Thiokol TE-M-364-4 solid fuelled motor.

The length of the four stage launch vehicle was up to 48.76m, depending on the payload it carried, and it had a capability to place payload of up to 15,400kg into orbit.

The Titan IIIL was a mid-1960s proposal for a launcher to place heavy payloads into low orbit. Its principal feature was a larger diameter first stage to accommodate four engines rather than just two engines. A version with two strap-ons, Titan IIIL2 and a version with four strap-ons, to be known as Titan IIIL4 were also considered, as was a Titan IIIL6 with six strap-ons, which, at one stage, was considered as a first stage booster for the Space Shuttle. None of the versions proceeded beyond the early design stage as there were no perceived payloads that required these launch vehicles. 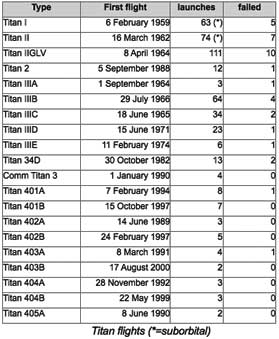 A Titan IIIM vehicle, which was to have larger solid fuelled boosters, was intended to be used in conjunction with the Manned Orbital Laboratory (MOL) program. It was cancelled in 1969, by which time only the first and second stages had undergone static tests. The launch vehicle was to have had a length of approximately 39m and a capability to place a 9100kg payload into low orbit.

A further development of the Titan III family of launchers, was the Titan 34D, which used 27.60m long strap-ons as well as the first and second stages of the Titan IIIC launch vehicle, combined with the Boeing developed Inertial Upper Stage (IUS) which was propelled by a United Technologies Orbus-21 solid fuelled motor of 173,500 N thrust and a United Technologies Orbus-6E solid fuelled motor with a thrust of 74,340 N, or a Martin Marietta Transfer Orbit Stage (TOS) with a solid rocket motor of 187,107 N. This was topped with an IUS-2 as the fourth stage. Some flights also included the Transtage of the Titan IIIC.

The length of this combination was 48.76m, depending on the size of the payload carried. Being capable of placing payloads of 14,515kg into low orbit, the first flight was on October 30, 1982. The 13th and last flight was on September 4, 1989. One of these was a failure.

In the early 1990s, Martin Marietta identified four launch vehicles as Commercial Titan 3. The flights were between January 1, 1990 and September 25, 1992. It was an upgraded version of the Titan 34D intended to be fitted with a Transtage, IUS, PAM-D2 (fitted with a Thiokol Star 63F motor of 107,200 N) or the Martin Marietta Transfer Orbit Stage (TOS) upper stage. The length of this combination was 48.76m, depending on the size of the payload carried. It was capable of placing 14,500kg into a low orbit.

Titan 4
The Titan 4 series of launch vehicles was procured by the U.S. Air Force and came in various versions. The length of the launch vehicle was up to 62.80m, depending on the configuration and the payload carried. The payload fairings varied from 17.10m to 26.2m in length and were up to 4.2 m in diameter.

The Titan 401A version combined the first two stages of the Titan vehicle with boosters with a Centaur T upper stage. It also had two United Technology 1207 strap-on boosters which produced a thrust of 7,117,725 N each. Payloads up to 21,830kg could be placed into low orbit. The Titan 401A flew for the first time on February 7, 1994, and nine flights were conducted, of which one failed. The last flight was on August 12, 1998. 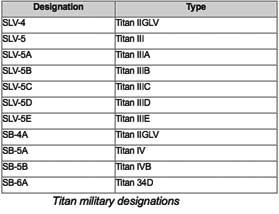 The Titan 402A version used the Boeing IUS as the upper stage as well as two United Technology 1207 strap-on boosters and was launched from Cape Canaveral to put 17,700kg into a low- Earth orbit. The first flight was on June 14, 1989, and three were completed, with the last one on December 22, 1994.

The first Titan 402B, which was fitted with two Hercules SRMU strap-ons, was launched on February 24, 1997, and five been launched, with the last one occurring on February 14, 2004.

Two Titan 403B flights were conducted, with the first one on August 17, 2000. The ‘A’ and ‘B’ letters referred to the type of the strap-on boosters, which were the same as for the Titan 401A and Titan 401B, respectively.

The Titan 404 was a configuration with no upper stage to be launched from Vandenberg. The payload fairing size and orbital parameters remain secret. Payload capacity was 13,600kg into low orbit. Similar to the previous versions, the ‘A’ or ‘B’ indicated the strap-ons used.

Titan V
The Titan 5 was a development proposal with an improved first stage using a Pratt & Whitney engine with a thrust of 445,728 N. No other details are known, as the development of this vehicle was never completed.

About the author
Jos Heyman is the Managing Director of Tiros Space Information, a Western Australian consultancy specializing in the dissemination of information on the scientific exploration and commercial application of space for use by educational as well as commercial organizations. An accountant by profession, Jos is the editor of the TSI News Bulletin and is also a regular contributor to the British Interplanetary Society’s Spaceflight journal. 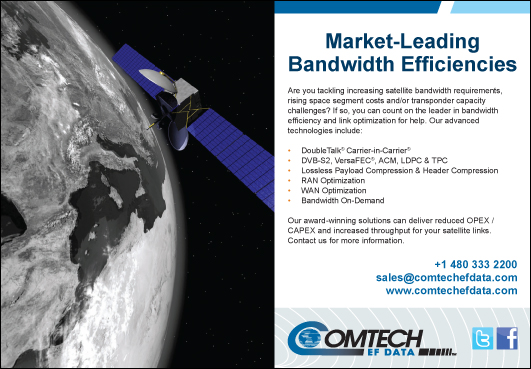