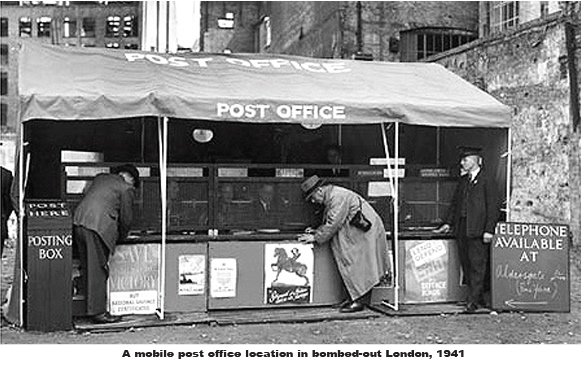 At the turn of the 21st century, postal services worldwide are facing more challenges than ever before. Electronic communications is one of most profound challenges that postal services have encountered. Postal service revenues shrunk sharply when fax machines became standard office equipment in almost every company and then they took another hit when the Internet became an indispensable tool for just about everyone. In addition, postal operations are hampered by problems such as limited access to remote locations and continual losses of revenues due to inefficient operations of some of its outlets.

In 2008, China Post deficits from inefficient rural and urban remote outlets were close to $3 billion a year. Despite these enormous losses most of these outlets could not be closed, as this would leave essential postal services unavailable to those who need it the most.

Postal service providers have to look for other sources of revenues in order to maintain their large operations intact. They are transforming themselves to provide additional services, so it is not surprising to see Post offices running logistics, retailing various goods, acting as a bank and also selling insurance. In a stunning example, 25 percent of all Japanese savings ends up in the bank operated by Japan Post. At the same time, Postal services are trying to reach more customers in remote areas as well as offering much clamored for services during the rush hour in urban locations.

A Remedy?
The Mobile post office looks like a possible remedy for many of these problems. Mobile post offices have been around for more than 100 years. However, most of these could only handle the collection and distribution of mail and parcels. The collected mails and parcels had to be sorted at the post depot. This reprocessing increased the cost. 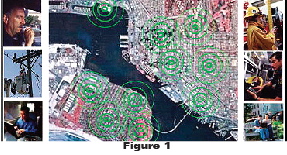 It is not economically feasible for a post service provider to only operate services for mail and parcels. This is one of the reasons why the old mobile post office did not last long and why new mobile post offices need to be able to handle many new post services, which include logistics (EMS), retail of commodities, as well as banking services. The key to making this all happen is to have a reliable, sufficient data link between Headquarters and the mobile post office, anywhere and anytime.

There are several ways to provide a data link for mobile post offices. The most common one is to use a terrestrial cellular network. However, this solution has a number of shortcomings:

— Security
No matter if it is GSM or CDMA, transmissions can be easily intercepted, which would make it impossible to offer banking services. While satellite does not have this problem, physically the link from a specific location on Earth to a designated satellite is only possible through a single route; plus, satellite frequency has to be coordinated, so there is less frequency interference as compared with all terrestrial means. Such offers a clean and secured data link for the mobile post office to use.

— Speed Of Transmission
Even 3G, when compared to satellite transmission capacity, can only provide medium level transmission speeds of 9.6kbps-170kbps; this is inadequate and would cause service delays. Slow speed will also make it difficult to offer reliable service. It may be sufficient for mailing services, but definitely not for banking services.

— Reliability
Having speed that constantly meets a remote operation requirement for various applications is always a big challenge for terrestrial networks. Due to network congestion in certain areas and at certain times, using cellular-like network for mobile post offices would not be feasible. Especially in locations such as a sports stadium or outdoor concert, where a mobile post office would be deployed to serve a large group of people. The cellular traffic in this area would become congested, causing calls to drop, which would ultimately result in the temporary stoppage of the data link traffic, as voice traffic is generally given higher priority than data.

— Availability Of Service
This is the most important advantage of a satellite link, which gives true anytime, anywhere connectivity and mobility.

Figure 1 shows a terrestrial network’s coverage in an urban area. The gaps without coverage are easily visible. In rural areas, where many of the mobile post offices would be deployed, the anywhere, anytime connectivity that satellite provides is, in most cases, the only alternative available. In the case of emergency, such as an earthquake, the only choice of communications is satellite, as it does not depend on the terrestrial infrastructure, which most likely has been destroyed. 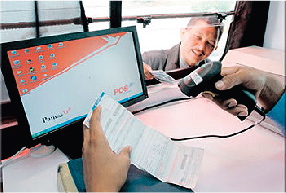 Post Malaysia Berhad is the exclusive provider of mail services in Malaysia. To reach out to more customers and for their convenience, it is launching two new services, namely, the country’s first-of-its-kind Post-Automated-Machine (PAM) and Post-on-Wheels — the mobile post office.

PAM is similar to a bank’s ATM (automated teller machine), but it is the first of its kind that is integrated with a postal service. PAM services include the purchase of stamps, posting of non-standard letters (up to 2kg), posting of domestic PosLaju items (up to 2kg), posting of domestic PosParcel and PosDaftar items (up to 2kg), and top-up for Standing Order Deposit Accounts (Soda). Customers can also pay utility and telecom bills via these mobile post offices. All transactions are done on-line, in real time, with no other processing required. 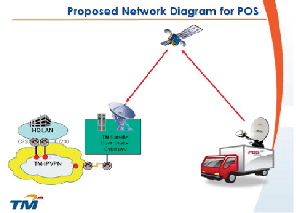 A 64kbps/64kbps satellite link connects with Post Malaysia’s PAM and its headquarters’ servers via Telekom Malaysia’s satellite Hub. The mobile unit with C-COM’s iNetVu® (http://www.c-comsat.com/) antenna system installed can be moved to any location in Malaysia. Once the vehicle reaches the site, a simple press of a button results in the antenna automatically pointing to the desired satellite. Traffic from the mobile unit goes up to the satellite and, from there, down to the satellite hub, where the traffic is routed via backhaul to the HQ. 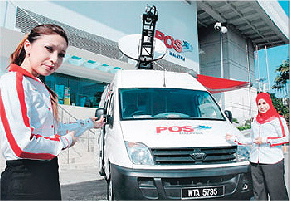 The response from the public has been very encouraging. POS Malaysia plans to deploy another 30 PAM units this year. The goal is to install a PAM in every post office, nationwide, that will run round-the-clock, all in due course.

It does not cure every problem the postal service providers have to contend with today. However, this technology does improve the efficiency of their existing outlets. Additionally, it provides far more access to their customers for more revenues – plus, the evidence of change is an indication customer can expect better postal services in the future. 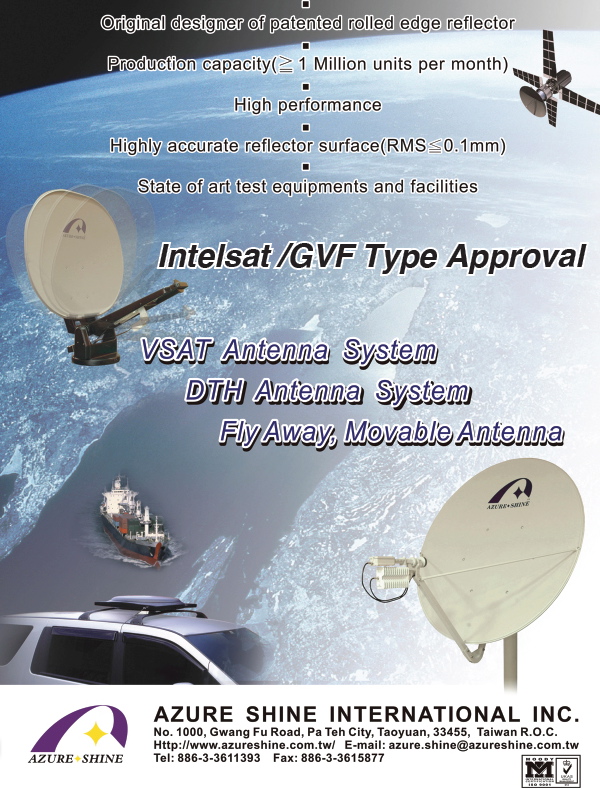