Traditionally, the process for commissioning VSAT terminals tends be labor-intensive and time consuming, prone to causing unintentional yet highly disruptive interferences. The underlying causes are many: Multiple parties that must be involved and well coordinated; complexity of the tasks themselves; the need for relatively high skill-levels; and extensive training for the installers and others. 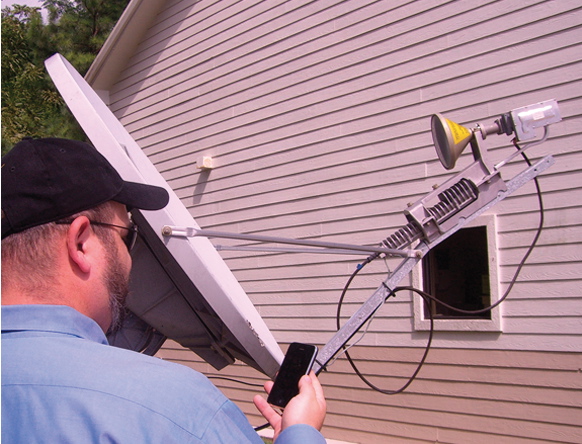 These on-the-ground realities are further exacerbated by the rapid and sustained social and economic changes worldwide: rapid deployment for VSAT infrastructure in both developed and developing regions of the world coupled with the constant pressure to do more with less. The consequences of these changes are two-fold: the push to deploy VSAT on a massive scale, and the need to do this as cheaply as possible while trying to improve the quality of the underlying services promised by a VSAT infrastructure. These inherent agenda cross currents make the simultaneous accomplishment of all these objectives a nearly impossible challenge, thus necessitating new thinking and new technology to overcome them. 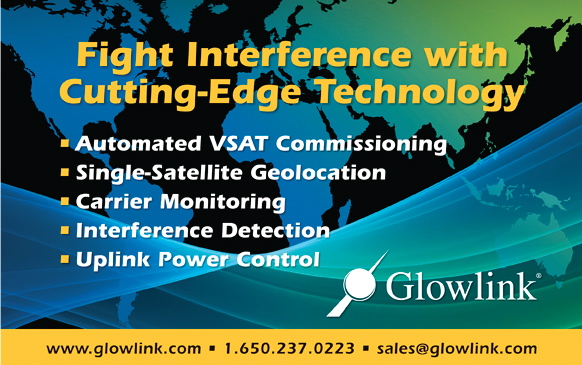 The installer often follows a tedious, time consuming procedure to point/peak the antenna, align its polarization, and then set the transmit power. Almost without exception, these steps are done in the blind. The installer is completely dependent on NOC and/or Hub personnel who serve as the installer’s ‘eyes and ears’ and who orchestrate the installer’s activities based on what they hear and what others see. The resultant high degree of coordination needed and the total lack of transparency for the installer make it nearly impossible to ensure optimal performance and avoid causing satellite interferences.

Adding to this situation is the enormity of activating an entire VSAT network. Often hundreds or even thousands of terminals need to each go through the same laborious commissioning process over a short period for the network to be fully activated — with each and every terminal installation job representing a time-consuming and costly undertaking. 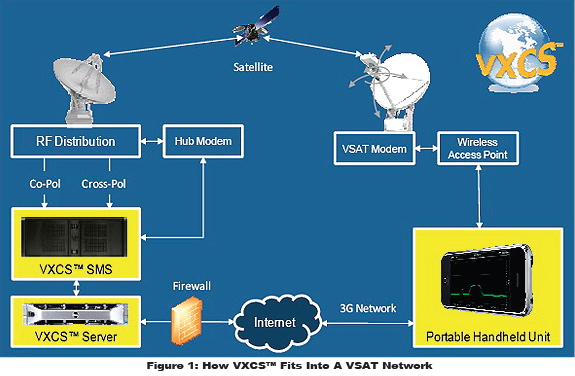 To The Rescue.. A Secret Ingredient
New advances in technology have emerged that offer the VSAT industry an upper hand in dealing with these problems and these challenges, resulting in effective, efficient and interference-free VSAT network roll-out.

The secret ingredient to making VSAT commissioning short and sweet is simple: empower the installer and remove the dependency on NOC and Hub. This results in two compelling value propositions: more reliable and interference-free VSATs; and dramatically reducing — essentially zeroing out — the workload of NOC and Hub personnel.

One of the best and most recent examples imbued with this ingredient is the VXCS™ system, an automated VSAT commissioning system introduced by Glowlink Communications Technology in September, 2010. VXCS™ is specifically designed to simplify the most labor-intensive, intricate, and time-consuming parts of VSAT commissioning, lower the skill levels required, simplify training, and dramatically reduce the extent of NOC or Hub personnel involvement. Key VSAT terminal commissioning tasks that are dramatically simplified by VXCS™ include:
How VXCS Fits Into A VSAT Network
VXCS™ is comprised of three elements:
The VXCS SMS is a digital spectrum measurement system that performs the measurements and number crunching in support of automating all the traditionally labor-intensive, time-consuming tasks involved in VSAT terminal commissioning: antenna pointing/peaking, polarization alignment, and uplink power adjustment. The SMS also provides spectrum analyzer functions that the installer can remotely access for reference during installation. 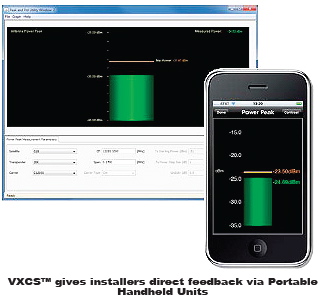 The VXCS Server provides the Installer managed remote access and control of the SMS functions. It also stores VSAT terminal commissioning results and data that can be used in centralized Hub functions such as verification of proper terminal installation and authorization of traffic activation.

The Portable Handheld Unit (PHU) is carried by the installer and can be either a laptop PC or smart phone (e.g., an iPhone). The Installer uses the PHU to directly access the Hub-located VXCS equipment and to guide installation via visual, graphical display of measurement results without involving the NOC or Hub personnel. The PHU connects to the Hub-located VXCS™ equipment via standard networking infrastructure, such as the Internet, Wi-Fi, 3G wireless, or over the satellite via the VSAT terminal/hub link — a crucial alternative especially in remote areas where terrestrial communications infrastructure may be unavailable and where satellite phones can be costly .

Together, the VXCS SMS, VXCS Server and PHU revolutionize the approach to VSAT terminal installation by making it easy, accurate and reliable. VXCS enables direct visibility of the terminal commissioning actions the installer takes to perform the installation, and in the process minimizes and even eliminates the amount of direct involvement necessary from the NOC and Hub personnel.

How VXCS Helps...
Prior to commissioning a VSAT terminal, an installer assembles the antenna with the associated RF electronics, connects the modem, and positions the antenna’s azimuth and elevation settings to predicted coordinates based on the intended satellite and the terminal’s location. With the initial VSAT terminal setup in place, the installer then proceeds to perform the following three tasks:
— Antenna Pointing/Peaking
This task involves adjusting AZ and EL antenna pointing to find the overall best setting for maximum transmission gain. Traditionally, VSAT installers would rely heavily on NOC and/or VSAT Hub personnel for the process via measurement feedback from the NOC/Hub. In other words, the installer basically performs the task in the blind. Problems such as language barriers, dropped calls, background noises, and constant interruptions are common occurrences that can impact the progress or success of antenna pointing/peaking.

Sometimes the lack of any terrestrial communications altogether can mean using costly satellite phones, assuming they are available at all, for a task that could consume many minutes if not an hour or more. The consequence is increased workload and frustration for all parties involved, not to mention the high potential for adjacent satellite interference — an increasingly significant problem as the antennas themselves become smaller and more ubiquitous.

VXCS solves these problems by removing the Installer’s blindfold. 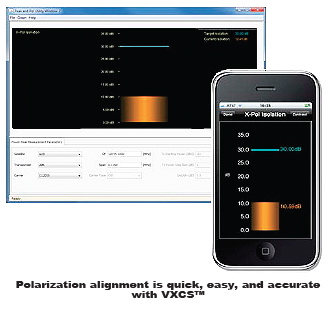 A hand-held device such as a smart phone provides direct and immediate, visual, graphical feedback to the installer as the VSAT antenna is positioned. With VXCS, the antenna pointing process can be performed quickly and accurately. In addition, VXCS™ offers the significant benefit of minimizing the occurrence of interferences due to erroneously pointed VSAT antennas.

To complicate things a bit more, the difference between an acceptable level of isolation and an unacceptable one (the latter of which will result in satellite interferences) could be as small as a couple of degrees in feed rotation, thus requiring a high degree of precision, accuracy and patience in carrying out this procedure. Yet, during the entire process the installer is completely in the blind and at the mercy of the NOC and its setup, monitoring, and interpretation of the signal. 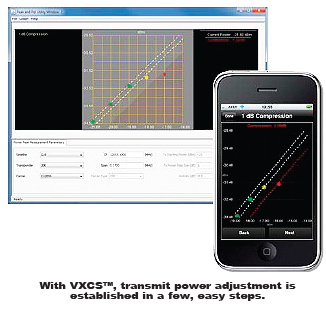 VXCS provides the installer instant feedback without the aid of the NOC or VSAT Hub personnel. VXCS automatically measures signal strengths on both polarizations, computes the isolation amount, and displays this information graphically on the PHU as the feed is rotated. Thus, the installer gets accurate and timely feedback across the slightest adjustments to help make the necessary precise adjustments.

Traditionally an Installer would perform this task with NOC assistance on the phone, adjusting, for instance, the modem output power one step at a time until the NOC advises they have reached the desired level. This can also be a labor-intensive process that can significantly increase the workload for both the installer and precious NOC resources.

VXCS automates measurement of the compression point via a direct, intuitive display on the installer’s PHU, again significantly reducing/eliminating the need for NOC involvement. With the PHU, the installer sees a clear indication of the measurements he needs to reach the optimal transmission point. Furthermore, these measurements are stored in the Hub-located VXCS server, so the VSAT service provider can retrieve and reference these measurements for power re-adjustments at a later date.

Dramatic Improvements
Table 1 summarizes the quantitative improvement as a result of using the VXCS during field trials. 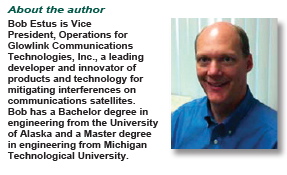 Cutting-edge technology such as that offered by VXCS is an effective tool for improving the efficiency and productivity of VSAT terminal commissioning. Through automation and handheld tools, installers can perform the most complicated and labor-intensive commissioning tasks easily and autonomously, thus minimizing the dependency on NOC or VSAT Hub personnel involvement. Most significantly, by conducting the most demanding tasks quickly and accurately, VSAT commissioning can achieve substantial system performance while reducing costs, workload and the incidence of interferences.