Since the dawn of mankind, innovative thinking has been the precursor of technology, a reality that has weathered the test of time. And as technology evolves, every good idea or innovation is superseded by the next resulting in an eternal refinement, or “techno-evolution.” 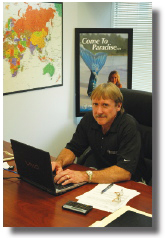 As an example, take one of the world’s earliest inventions — rolling logs gave some wise-minded Neanderthal the idea to carve a wheel from stone. Though the introduction of this revolutionary new idea delivered huge benefits, there was room for improvement from the start. They were too heavy to ship and if they broke, they couldn’t be repaired. Refinements in “wheel technology” lead to a wood-based variant (much lighter and easier to carve) and eventually, someone figured out how to vulcanize rubber (I don’t even know what that means!) and presto — the tire was born! So, there you have it — the techno-evolution of the wheel.

Now let’s refer to the ancient SATCOM scroll and travel way back to the beginnings of our industry. Sure, we’re just talking about the 60s, but for us old veterans, SATCOM chronology is expressed in dog-years, as it seems like a long, long time ago.

When the challenge of launching an RF signal from Earth to an orbiting circa 1960s vintage satellite presented itself, the first SATCOM high power amplifier (HPA) was introduced. In its infancy, the amplifier was built around a relatively frail tube that had to be carefully packaged in a big metal can, kept away from magnets and certainly not dropped — “Hey, they’re still that way!”

Once installed, it had to be hit with enough voltage to defibrillate a Sasquatch and had to be powered up and down with care to prevent permanent damage. However, like the VHS tape, vinyl LP and Thigh-Master, time initiates change. And though tube-based amplifiers served their purpose for many years, they could never escape the inevitable day that superior technology would take the torch and continue the race. As is always the case in techno-evolution, someone will invariably create a better mousetrap — a slicker widget that resolves problems inherent in the previous technology and better meets the demands of a continuously changing industry.

Back to the ancient scroll and fast forward a couple of decades, or for us SATCOM veterans, a century (after being adjusted with the dog-year chronology converter). Developments in Gallium Arsenide transistor technology projected a glimmering light out on the horizon. A light that would one day manifest itself in the form of an answer to the industry’s cries, for more robust architecture, higher MTBFs and easier maintainability

And so was born the solid state power amplifier, or SSPA, an acronym forever burned into the chronicles of the scroll. As is typically the case for new innovations, take-up was gradual in the beginning. After years of being the technology de jour, the industry had become complacent and accepting of the limitations placed upon them by the tube amplifiers.

Though reluctant at first, they began to notice, evaluate and eventually replace the legacy amplifiers with new transistor-based products. Soon, like the hordes of Arctic lemming stampeding their way to the seaside cliffs of Norway, the industry embarked on what can only be described as a mass migration to this new and exciting technology.

SSPA technology can no longer be described as particularly “new”. After many years of deployments into harsh environments, and abusive applications, SSPAs have proven themselves to be worthy of the high expectations placed upon them by Earth station operators world wide. As the primal laws of survival would dictate, every fading technology will seek to reinvent itself in hopes of reversing the direction of techno-evolution.

Steroid shots in the form of enhanced linearity and suppressed collectors were injected in a futile attempt to rejuvenate dying demand. And for a fleeting moment, technology pioneers romanced by the reflection of days gone by – like going to drive-in movies, watching first run episodes of the Lone Ranger and monitoring the body current of a bank of Klystrons — could not escape the lure of tiny, powerful RF modules, switch-less redundancy, cold standby and “Look Ma — no RF inhibits!”

As techno-evolution would have it, new developments in transistor technology have already opened the door for a new wave of features that are sure to further the divide between the old and new. SSPAs, with architectures based on the latest Gallium Nitride transistor technology, will be hitting the market in the coming weeks. They promise to give operators a new solution for generating hundreds of watts in very small packages for applications where nothing else will do

Not to take away from the fact that tube amplifiers are the legacy of the industry, they deserve the respect of having kept things going until innovations in technology would once again raise the bar.

There is no doubt that tube-based amplifiers will continue to enjoy a place in the industry, though they will likely continue to cast a shrinking shadow. After all, people still have VCRs, though content is limited to; exercise videos and tapes purchased at your local Love Shack. Audio purists still collect LPs and you can even find a slightly used Thigh-Master if you scout your neighborhood yard sales. Perhaps the tube engineers will discover another technology break through that reverses the rules of techno-evolution and allows them to regain the throne as the HPA technology of choice — and if you believe that, you probably believe in mermaids.

More Radford ruminations at this link.