Satellite manufacturers need to monitor the transport of very delicate objects and parts, and whenever they move satellites they need to record the shocks that they are subjected to — or else risk launching an unknown quantity.

When satellites are safely floating around the weightless realm of space there is little to affect their reliability, which is just as well given the complications involved with repairing them. The most critical period affecting the reliability of satellites is thus the dangerous part of their lifecycles where gravity and its associated effects conspire to render these frighteningly expensive and fragile objects into useless pieces of spacejunk. And the real nightmare comes from the fact that engineers may not know about any damage until it is too late. 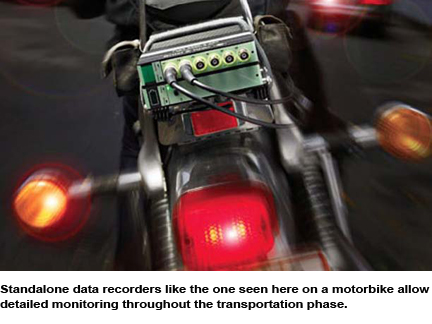 Satellites have three vulnerable stages in their lifetimes, and none of them take place in the primary environment for which they’re designed. First comes the construction and reliability testing phase, then they’re shipped around the Earth, and finally comes the dramatic transport into space.

The enormous stresses encountered by a satellite during launch are insured against through durability shaker tests and by blasting high level acoustic waves at them to excite structural resonances. These are dramatic enough that they generally can’t be repeated due to the high risk of damage. They also require large mechanical shaker configurations and careful monitoring throughout the entire testing process.

Satellite testing is an exact science and is performed according to Finite Element Models (FEM) that use computer programs to simulate the stresses likely to be encountered. These models take acoustic and vibration telemetry data from previous launches, as well as vibration data from actual structural tests, to create a faithful reproduction to accurately ensure the satellite(s) can endure the necessary strains. 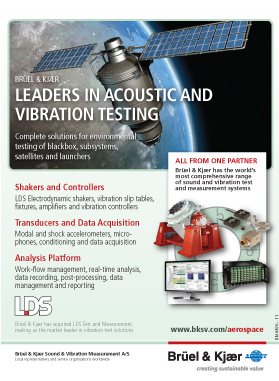 With satellite projects frequently stretching into the billions of dollars, however, even this leaves too much room for error. Computer modelling is all very well, but ultimately there’s no substitute for strapping a satellite to a shaker and testing it to the limit. These durability tests involve far larger shaker systems, often in combinations, to input the necessary force on the necessary payload. This presents the problem that the test article will have subsequently surpassed the acceptable limit beyond which its life expectancy is deemed to have been critically degraded.

Typically, though, manufacturers will create two identical satellites, one of which will never slip the bonds of gravity. This unlucky twin or ‘engineering model’ is instead fastened to a vibration test system and subjected to vibration levels that may even surpass its design tolerances. Then the genuine ‘flight model’ is also subjected to vibration testing and modal analysis at the same facility — though at a far gentler magnitude. Nevertheless, the data gathered is enough to be able to compare the dynamic performance of the two identical satellites, which, all being well, should also be identical in relative terms.

These qualification tests occur in a test cell that is normally separate from the manufacturer’s location, necessitating a perilous journey to get there. Satellites on the ground are out of their element, and need to be treated very carefully throughout the journey from construction facility to test lab, to space vehicle. Like a vulnerable patient, constant care can ensure the satellite’s health is carefully maintained. 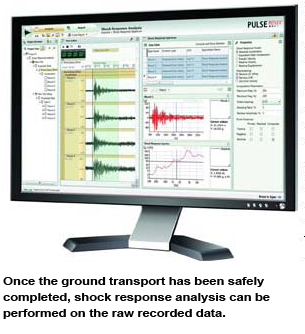 While monitoring the journey to the test cell is less critical than the subsequent one to the launch pad, it is nevertheless imperative that no unknown effects influence the comparability of the two models. Once certified at the test cell, the flight model must not undergo any stresses that will infringe upon the ‘quota’ it is designated to endure. Such strains could render the entire qualification process pointless, and consequently must be painstakingly monitored.

Earthly Transportation —
A Dangerous Undertaking
To borrow a concept from Donald Rumsfeld, in contrast to the ‘known known’ of the launch stresses, the transportation phase is a ‘known unknown’ that is potentially open to greater unforeseen inputs and accidental effects. While inputs to the satellite are controlled as much as possible, the potential for unplanned events like shocks remains ever present.

Put another way, once the satellite is in the rocket, it’s going to go upwards, and it’s going to shake a lot before it does so. Before it goes onwards and upwards, it’s going travel through the realm where the effects of gravity conspire on its journey with elements such as roads, vehicles and cranes.

Accidental events in this phase are inherently unknowable, and often multi-dimensional. Consequently, aside from doing everything possible to ensure such things don’t occur in the first place, there are no definite preventative measures. There is still plenty that can be done to ensure the launch of a fully functioning satellite. If anything occurs during transport that might feasibly affect the performance of a satellite once it has been put into orbit, the operator needs to know about it in detail. 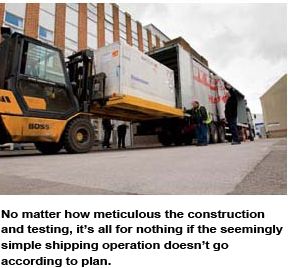 By closely recording the forces that a satellite is subjected to on the way to launch, this dangerous phase can be quantified and assessed. This leaves far less to chance. For example, when moving from the ‘hangar’ to the launch pad, any jolts or impacts that might affect the reliability of the satellite can be recorded and thoroughly investigated. Once safely in place as a space vehicle’s payload, the recorded data can be quickly post-processed and assessed against the design’s limitations to identify any extreme events, and their duration.

For effective transportation monitoring, manufacturers need highly mobile and scalable vibration data recording systems. With a typical multi-channel setup, several accelerometers are mounted on the satellite and are able to record the forces acting on the structure for the entire duration of the transportation.

Data acquisition systems must be highly portable and flexible, with the ability to operate on battery power for extended periods. Modular systems with minimal cabling are ideal, being attached unobtrusively to the satellite and staying there throughout the transportation process — inside the considerable protective packaging. 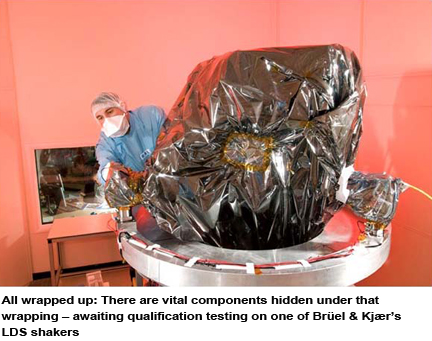 Correct The First Time
With any one-time-only measurement such as these, capturing the data correctly the first time is of paramount importance. Traditional challenges faced by data acquisition setups — such as selecting the correct input range — present a significant hurdle to effective monitoring.

In the past, if any overload (such as from an unforeseen shock) occurred outside the pre-defined measurement band of interest, the signal would be clipped. Worse, with classic analyzer technology, the user was not necessarily notified about the overload. This could result in there being frequency components in the analysis spectrum which didn’t actually exist in the real world, and could damage the real data that was captured.

Now, Brüel & Kjær’s Dyn-X technology allows a single analysis range that captures data from the smallest rattle to the largest knock. This means there is no need for trial runs to ensure correct input ranges for the various input channels, so the certainty of getting the measurements correct the first time is significantly increased.

It’s particularly useful in situations such as satellite transport where unknown inputs (that are impossible to range) are anticipated, and gives operators the guarantee that the entire measurement and analysis chain consequently matches, or outperforms, the range of the actual transducer used for the measurement. With no setting of input ranges, and no need to be concerned about overloads, under-range measurements, or measurement accuracy, the safety of recordings is dramatically increased. When the analysis of the data could potentially decide the space-worthiness of a satellite, there is no margin for error. 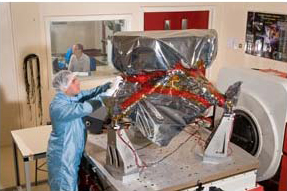 During transport, event marking capabilities enable an operator to electronically note any particular shocks or events in the time data, helping easy identification later on. This allows significant events to be quickly located and replayed to ensure the satellite’s compliance with designated shock limits once it’s safely installed for its final, turbulent journey.

Feedback Into The System
Recording the raw data from ground transportation gives a valuable, full picture of the journey that can later be fully analyzed at leisure using specialized software tools such as Shock Response Analysis, as provided with Brüel & Kjær’s PULSE Reflex post-processing software. The entire journey – including data from significant events – can then be fed back into the FEM, allowing stresses from the ground transport phase to be considered and taken into account in future design and modelling situations.

All satellite photos are courtesy of RAL Space 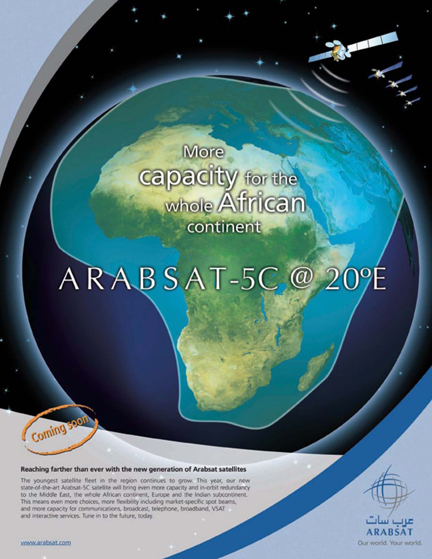