International explorer Mike Horn is renowned for undertaking dangerous expeditions around the world and for using the latest in satellite technology to document the impact of climate change. In a break from his usual adventures, Mike and professional Rally Racer Cyril Despres took part in the Dakar Rally 2021. Their vehicle was covered in equipment used to collect essential data for the development of a fully hydrogen-powered car, which will be used in the 2023 race. The pair hope that by updating followers in real-time, they can change the way people participate in motor sports around the world. Mike spoke about his latest adventure.

Hello, Mike. You have gone from polar exploration to driving a fast car across Saudi Arabia. Tell us what your thoughts were regarding this particular adventure. 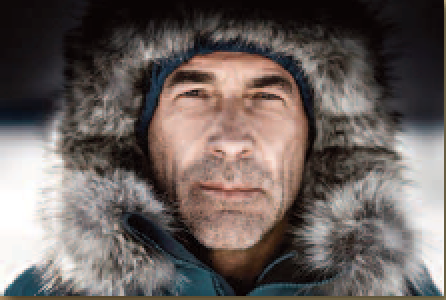 Mike Horn (MH)
Life is all about adventure. It is what I love most about my job. From traversing the poles to being in one of the most difficult, dangerous races in the world, I feel it is important to not only challenge myself, but to share the impact climate change is having on the world.

I was excited for this rally, for the opportunity to enter a professional race in an amazing, fast car — not knowing what was going to happen at any moment. It was special. Being out of my comfort zone always makes me feel alive, so when Cyril Despres, a five-time Dakar Rally winner, approached me, I said ‘yes’ straightaway.

Then reality hit. I was in a car, driving at 160 miles per hour, in between roadblocks, into empty riverbeds and through massive sand dunes. It was terrifying and exhilarating, all at the same time. The rally was over 7,000 kilometers split into 12 different stages and it took the first five days for me to learn exactly how I was going to survive this rally. After that, we started achieving the top 10 ranking and that added a whole new layer.

I love competition and being ahead of people instead of being behind them. And when you are new to something, you learn so quickly that everything becomes possible.

But at the same time, I knew we were taking part in an important mission to change the way in which people participate in motor sports worldwide. As part of this, it was critical for us to be able to share our journey in real-time and satellite connectivity ensured I was able to do this.

Our race was also all about collecting data ready for the creation of a fully hydrogen-powered vehicle, which will take the stage in 2023 in a ‘world first’ to try to compete in the race in the most sustainable way.

Would you say that sharing your journey has become pivotal for your mission?

MH
Definitely. It has become hugely important to me that we are able to update my followers and other people around the world on the progress we are making.

In my most recent adventure, before the Dakar Rally, we worked with Speedcast to provide live weather updates from the Arctic to weather forecasters, as well as send back photos, live data and blogs to show how quickly the environment was changing.

Connectivity has become crucial to my mission of changing the world and waking people up to the reality of what is happening with the changing climate. For this challenge, we faced not only the tough conditions of the desert, but also the issue of constantly moving around.

How did you overcome this challenge?

MH
Using a handheld Iridium Extreme device provided by Speedcast, which works through the Iridium Low Earth Orbit (LEO) satellites, I was able to send data back to the team, make voice calls and update our position and status via the Speedcast FieldVision Application. This was important so followers could stay up-to-date with our race and see how we were doing as we traversed thousands of kilometres, collecting information ready for the development of this new hydrogen-powered car.

Technology like this has been hugely important in my previous travels on board Pangaea, where it is vital we keep in touch with the authorities and our support teams while out in the ocean. Being able to update my location, provide written comments and photos and basically be tracked ensures we always remain safe in case of any emergencies or rapidly changing situations. In this situation, however,

it was more about keeping our audience engaged and being able to share our story whilst also keeping our families and support teams aware of where we were at all times and how we were doing. If it were not for this satellite connectivity and tracking technology, it would not be possible for me to communicate my journey in real-time.

As we develop this zero-emission vehicle, people are really interested in hearing about how we will counteract the constant change of environments. This technology allowed us to capture what the car was doing, the speed in which it was travelling, the terrain we were crossing and the way the car moved. That information is critical as we try to change the way people participate in motor races.

Why is it so important to introduce hydrogen-powered cars into the world of rally driving?

MH
I have always wanted to do the Dakar, even though motor sports are against my philosophy of saving the world. So, I went to Dakar last year to train these young Americans as part of the Red Bull junior team, and at the same time, learn about the race so I could use that knowledge at a later date to make a change in the way we participate in motor sports in the future.

This year, we had a car given to us by a professional team as part of the Gen Z project. The car was fitted with sensors that would capture exactly what was happening in the vehicle. It turned the car into a sort of living lab in which we could record the accelerations, the braking and its reaction to turning left and right, among other things. All this data that we have collected has now made it possible for us to start construction of our hydrogen race vehicle.

It is not easy for the entire automotive industry to suddenly change its production. That is what we learned as part of this project and it is important for people to realize that, along with the impact that motor sports is having on the environment.

The emissions created has a huge impact on the world, which I have seen first-hand on my travels elsewhere. But it will take more than just one individual to change the way motor sports operate. It needs a movement, and to do that, we need to share our knowledge and our data to empower people to join us in our mission. The satellite connectivity we had in our race allowed us to do just that — to share our experience, our adventure and our mission.

For those motor companies, it is not that they do not want to change. But it is economically unfeasible for them, due to the cost of tooling, the machines and the parts needed. To be successful, they also need to sell a lot of cars.

What is next for this mission of yours?

MH
Well, we are continuing to develop this hydrogen-powered vehicle and as part of that initiative, we will be back in Dakar next year with two test vehicles. This will enable us to carry out further research and development to see how these cars perform and what else we need to do to perfect our creation.

The most common misconception people have when it comes to hydrogen is the constant fear that it is dangerous. However, we only use 700 bars of pressure, which means it is really safe. Once we have collected all this data, we can assure people that this technology is secure and hazard-free, whilst further developing the car.

The final competitive vehicle will then be ready hopefully for the Dakar Rally in 2023, and it is an occasion we look forward to seeing happen. We also want to make it possible for anyone to be able to track the car using hybrid satellite-terrestrial connectivity solutions, whilst the car is being driven anywhere in the world. But more on that is to come.