Televisa is the largest multimedia corporation in Latin America. It is a major international entertainment business offering content such as TV shows, sports and newscasts across
Latin America. 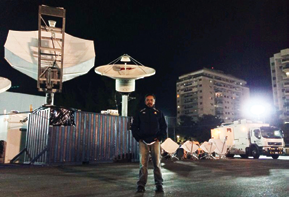 Mr. Ramirez in front of the antennas during night time in Rio.

Televisa’s satellite team shared how Norsat enabled FIFA content to be broadcast to millions of viewers around the globe.

The Televisa team was extremely busy with the 2014 World Cup in Brazil. Their satellite team traveled from Mexico to Brazil with their satellite truck, covering the Mexican team and it’s opponent’s matches. Oscar Herrera Ramirez is the Chief of Broadband and Satellite Network Operations at Televisa. He is responsible for the maintenance of the terminals, remote links with satellite and daily operations of the Televisa satellite team.

When they are not streaming a FIFA game, the satellite team is broadcasting reports, player interviews, location-specific news and more. During the football matches, they install antennas in areas where there are large gatherings of viewers, such as main plazas or city squares. 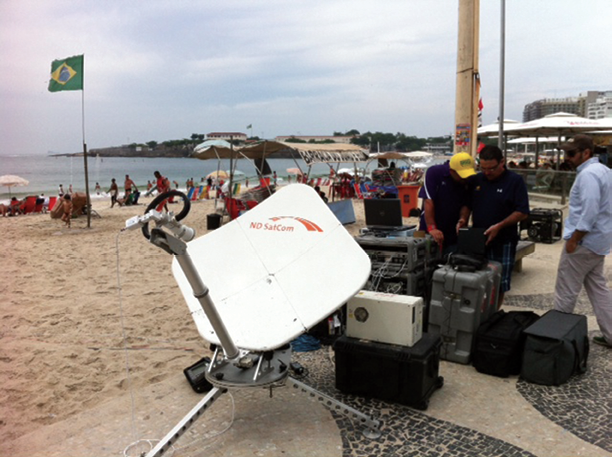 Oscar explained how Norsat terminals enable the Televisa team to capture the public reaction the moment such occurs. Norsat terminals stream the content to the International Broadcast Center in Rio de Janeiro, Brazil, which is then broadcast to the world. Thousands of fans may be lucky enough to enjoy the football in person, but it’s estimated that more than 3.2 billion viewers caught the live TV coverage—Norsat and Televisa had a hand in making certain that happened.

Televisa’s satellite operations unit used Norsat LNBs as well as Norsat Newslink terminals. The LNBs that were used for the  World Cup were installed on 4.5, 3.7, 1.5 and 1.0 meter C- and Ku-band antennas. Norsat Newslink terminals gave the satellite team at Televisa the ability to provide rapid response to the needs of various Televisa productions. 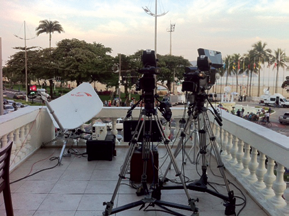 Norsat Newslink set up at a hotel for live broadcast.

Oscar also explained that the quality of Norsat products allowed them to be used by Televisa for a long period of time with little need for repair or upkeep. Oscar stated that the primary reasons for purchasing Norsat equipment was cost, quality and technical support.

When asked about the experience of working with Norsat products, Oscar replied that Norsat products give them a great deal of confidence in their job function. He added that the design of Norsat terminals gives them the flexibility to adapt to different types of RF equipment and make upgrades that enable them to keep up with new technologies.

Norsat’s Flyaway Satellite Terminals are extremely rugged and transportable and are designed for newsgathering in challenging environments. Conveniently packaged in industrial cases and supported by advanced pointing tools, customers such as Televisa are able to set up and initiate transmissions within a matter of minutes, without technical expertise.

Norsat’s Flyaway systems are field proven, rugged and reliable. With units continuously operating for more than eight years (by military and civilian customers) in locations that include Afghanistan, Iraq, and Haiti. 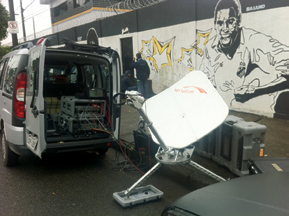 Norsat terminal set up in a city street behind the satellite truck.

Norsat’s LinkControl™ software seamlessly integrates all the tools needed for Satellite News Gathering (SNG) with an easy to use interface and advanced capabilities.

The company’s terminals feature tool-free setup and an intuitive deployment strategy. Norsat’s flyaway terminals are available in aperture sizes of 45 centimeters to 3.8 meters and include HD support with one or more airline checkable cases. 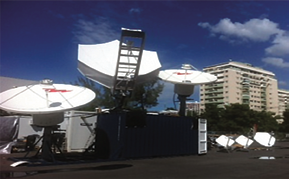 Televisa’s work at the 2014 World Cup is a great example of how Norsat connects the world to share some of the most exciting moments in history.