The Fédération Internationale de Football Association (FIFA) will host the 2010 World Cup in South Africa. The month long tournament of football matches will occur between June 11 and July 11, 2010 and will be played in 10 South African stadiums. This will be the first FIFA World Cup ever to be held in Africa — the event will draw upon an international audience and will be of great importance to the African continent.

Johannesburg will be the home of the International Broadcast Centre (IBC) for all television operations and the world’s news agencies for the 2010 World Cup. The high-tech IBC facility possesses a satellite teleport and telecommunications infrastructure, which supports a transmission capacity of 40 Gigabytes per second. A dedicated network will link the 10 tournament venues and the world. The 2010 World Cup will be the first to be broadcast in high-definition television (HDTV) to billions of viewers around the world .

Sentech’s digital broadcasting infrastructure will play a major role in the 2010 World Cup in South Africa. To facilitate the satellite-based communications between the 10 stadiums, where a total of 64 soccer matches wil be held and the International Broadcast Center, Sentech selected the DVB-S2 transmission standard and Comtech EF Data’s CDM-710 Broadcast Satellite Modems.

The Comtech Solution
As a long-time supplier of modulator, demodulator and frequency conversion equipment to broadcasters, Comtech products are installed in more than 160+ countries, with their broadcast solutions encompassing contribution and distribution for various broadcast applications. The products are fully compliant with key Digital Video Broadcasting standards, such as DVB-S2 and DVB-S, and interoperate with major satellite service providers and key encoding device vendors. 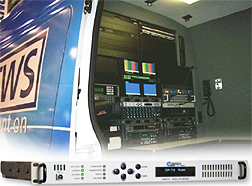 The CDM-710 Broadcast Satellite Modem is based on the latest transmission standard, DVB-S2, and is ideally suited for HDTV transmission. The broad range of modulation and coding formats of DVB-S2 enable link performance optimization — delivering, on average, 30 percent greater throughput when compared to DVB-S services. 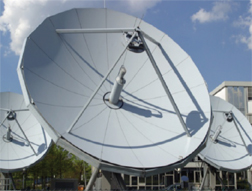 Users can tailor a link for the available bandwidth and power. Whether a link is for Direct to Home (DTH) or Digital Satellite News Gathering (DSNG), Contribution or Distribution, there is a format available to suit each application. Offered with either an ASI or Gigabit Ethernet interface, the CDM-710 supports legacy and nexgen video encoder / multiplexor platforms. The modem is augmented with a wide selection of redundancy options ensuring that broadcast clients have the most reliable transmission system available.

The CDM-710 Broadcast Satellite Modems will be used to power the video uplink services between the 10 stadiums and the International Broadcast Center in Johannesburg. By using DVB-S2, the Modems will enable the bandwidth-efficient delivery of the HDTV coverage of this international tournament. Sentech selected Comtech’s DVB-S2 Satellite Modems based on a proven track record of supporting leading providers of digital television entertainment services in other regions. 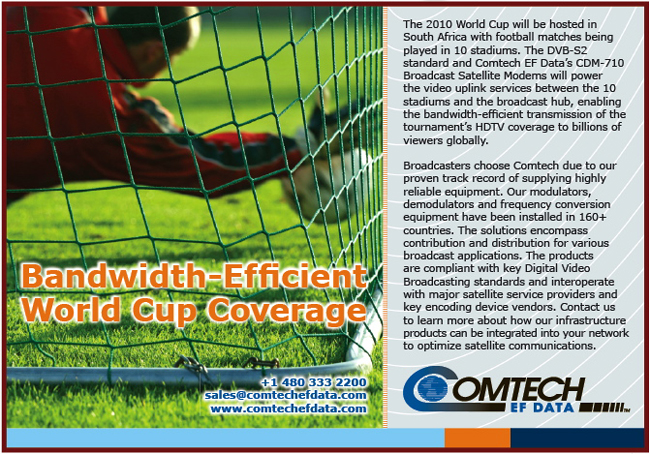