With the seamless coverage of large areas, satellite-based broadcasting to mobile users has become more and more popular in recent years. Digital Radio Mondiale (DRM) also offers large coverage areas and, therefore, these systems are sometimes considered as competing technologies. However, with each system’s benefits, the two approaches can actually complement one another in certain scenarios. 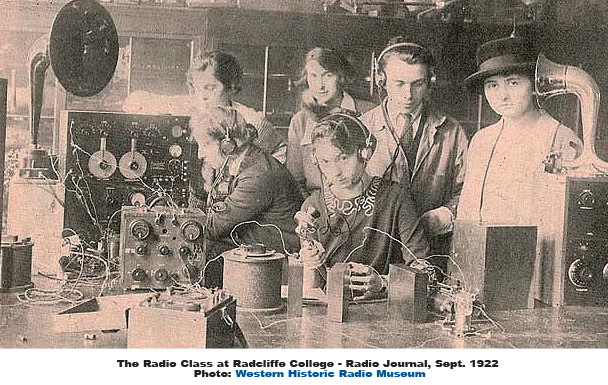 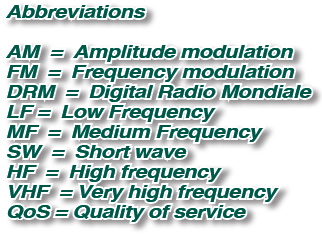 DRM is an openly standardized radio broadcasting system [1], which was developed to replace analog radio broadcasting in the AM and FM/VHF bands. For the design of the technology, the following requirements played an important role:
Satellite-Based Systems
In the past years, powerful satellites have become available allowing for full direct reception of the satellite signal with very small antennas. Typically, the antennas are similar in size to those of GPS receivers. This makes the systems attractive for mobile reception, which is possible with portable and even handheld devices. SDARS (Satellite Digital Audio Radio Service), sold commercially as XM Satellite Radio and Sirius Satellite Radio, is a good example. SDARS was introduced in 2001 and has since become a popular service in the United States. More than one hundred audio programs are assembled within a broadband multiplex, offering the customer a high variety of content. The user can choose between different music formats, talk, news and sports channels. In addition, the audio broadcasting is combined with data services.

The SDARS system was the first hybrid system to use satellite broadcast combined with complementary ground components (CGC, also called ATC = Ancillary Terrestrial Component). In the meantime, open standards such as DVB-SH (DVB standards for Satellite to Handheld [4]) or ESDR (ETSI standard for Satellite Digital Radio [5]) have been released and successfully tested in the field. Deployments of these systems are in planning phase and pilot installations are already on-air. 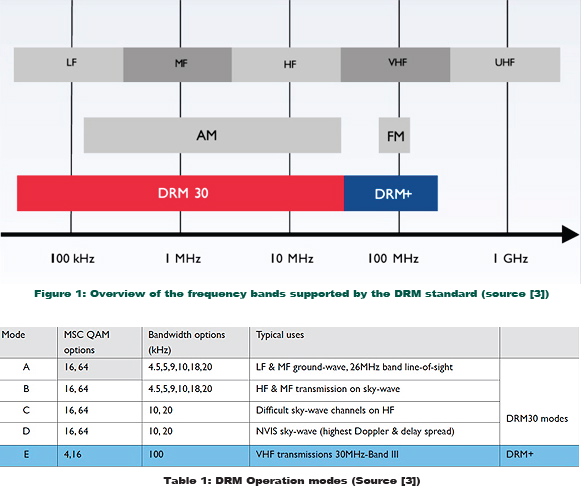 The concept behind the hybrid system is depicted in Figure 2. The satellite provides the core coverage. With technologies such as time diversity and/or spatial diversity, high service availability can be achieved by only using the satellite signal. However, in dense urban areas and for indoor reception, the satellite does not typically provide sufficient field strength. For such areas, operators install terrestrial repeaters to improve the QoS.

Coverage Characteristics
Satellite-based systems offer within the footprint of the beam, a nearly constant field strength over the complete coverage area. For frequency bands such as L- (1.5 GHz) or S-band (2 to 3GHz) the atmosphere and weather have a minor impact on propagation conditions. Therefore, services can operate 24 hours a day, seven days a week without interruption. In particular, for geostationary satellites the reception conditions are very stable, allowing, for example, installation of accessories to ensure access to the signals in areas without repeaters and no direct satellite reception. For example, a user can install detachable antennas or micro repeaters in places well-positioned to receive the satellite signal, such as a south-facing window.

There are three notable types of system deployments:


Full coverage (including indoor and handheld). Without repeaters, very high satellite power is required, or the capacity (number of programs) provided per satellite must be low. Using repeaters is a good trade-off. The satellite segment is designed to serve rural and suburban areas, and repeaters are installed in areas where the satellite is not sufficient or indoor reception is expected.

The footprint of the satellite beam defines the core coverage area. Figure 3 shows the footprint of the SDARS systems. The service targets the United States, but the signal also can be received in neighboring countries and many islands around North and Central America. If required, the coverage area also can be reduced by using spot beam satellites. For Europe it may be worthwhile to consider linguistic zones and use several spot beams instead of a global beam (Figure 4). In addition, combinations of global beams and spot beam coverage may be attractive. 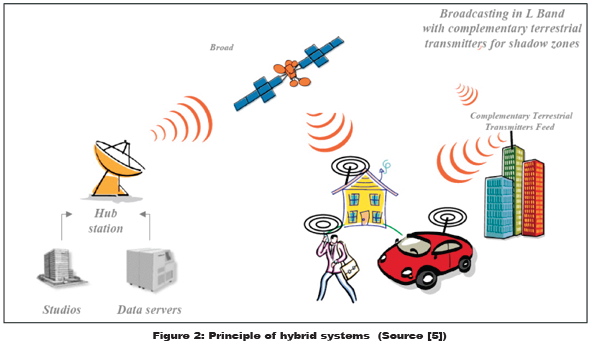 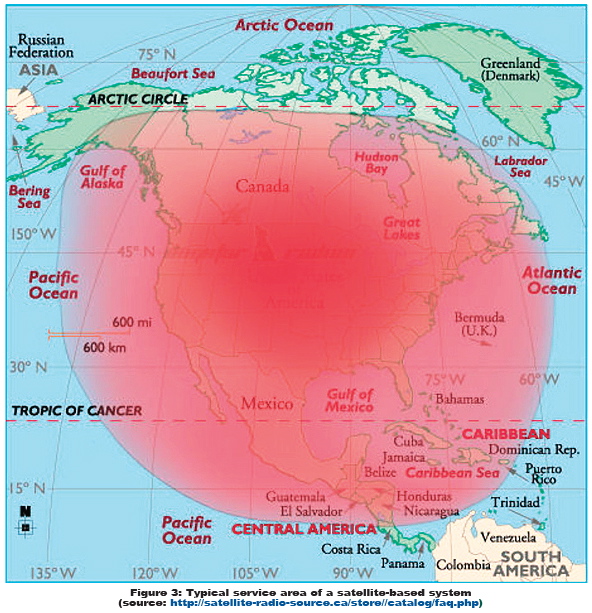 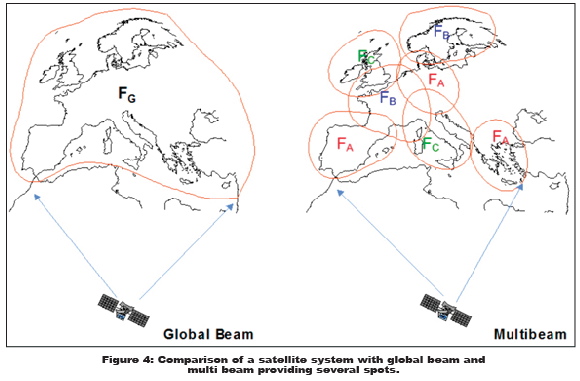 For wide area coverage, the sky-wave propagation becomes relevant. Signals are reflected in the ionosphere and on the ground, and may approach the receiver after several hops. Sky-wave propagation allows for beaming the signal toward regions far away from the transmitter, thus international SW broadcasts can span multiple continents. On the other hand, such effects as sun spot activity must be taken into account for frequency planning purposes. A 24-hour service may partially require frequency or transmitter site diversity. If one carrier frequency is not suitable, an alternative resource is selected. The DRM standard includes many hooks for automatic receiver hand-over to alternative frequencies and can adapt the modulation robustness parameters if the propagation scenarios change. Generally, it is essential to carefully plan a DRM network and take into account the time variant propagation conditions.

Terminal + Receive Antenna Considerations
The size of the antenna is a key issue for many terminals and car installations. The antenna size and the wavelength are correlated. For L- and S-band frequencies the wavelength l is in the range of 12 (S-band) to 20cm (L-band). A simple l/4 monopole antenna would already be matched to the transmit frequency. For these frequency ranges, very small antennas or antennas integrated into the handheld are typical. For a MF frequency of 800kHz, the wavelength is 375m, thus alternative antenna concepts are required. A typical antenna is a ferrite antenna, which makes the antenna compact while maintaining a good antenna gain. The drawback for such an antenna is the bandwidth, as the antenna design defines the useful frequency range.

The Service Concept
The DRM system was designed to use the same overall infrastructure concept as traditional AM and FM – one broadcast frequency operated by one broadcaster. Typically, one transmitter broadcasts the radio program together with complementary audio programs and data services. Besides a one-by-one replacement or extension of analogue stations by a digital system, DRM also offers alternative network concepts such as single frequency networks to extend the coverage area of a transmitter and to allow for the use of lower transmitter power per site. Program diversity to target individual listener groups is provided by a multitude of broadcasters and radio stations. 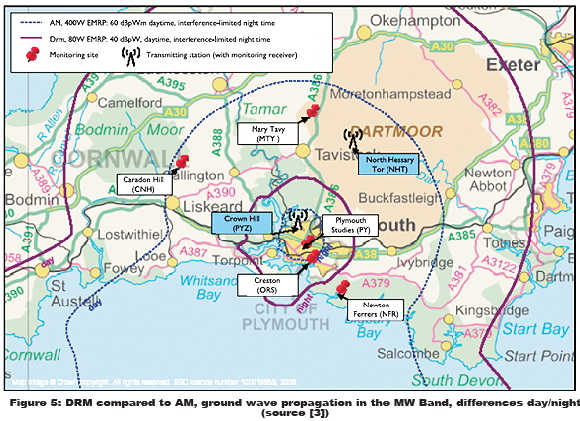 The satellite-based systems follow a different concept. A multiplex offers in a single set many (typically 30 -100 or even more) programs usually combined with various data applications. The program formats can be coordinated to ensure that each program to a certain extent offers a unique content. The user has a choice between different genres or talk channels addressing dedicated subjects or selected interest groups. However, offering a high variety of programs also has drawbacks. To be commercially successful, services offering many programs as a package should also target large coverage areas to reach a sufficient number of listeners per program. Using one carrier frequency for a multiplex of many programs also allows the parallel reception of many sub channels. This is especially attractive for data services and future radio services based on forward and store concepts. Innovative user interfaces offering functions such as time shift (repeat stored data, record a program while listing to another program, etc.) allows attractive combinations of listening to favorite music and getting up-to-date information via real-time broadcasting.

Conclusions
Today, AM and FM broadcast is characterized by many small stations partly targeting only local areas. The DRM standard, with its DRM30 and DRM+ configurations, is a powerful technology enabling these traditional radio stations to benefit from the advantages of digital broadcast. Significantly higher audio quality and additional listener benefits are offered together with more reliable coverage or lower required transmit power.

Satellite-based systems target rather a new type of service and offer a broadband service including a multiplex with many data streams. The broadband concept allows transmission of a bouquet of audio programs combined with attractive wideband data applications, and even video services can be added. 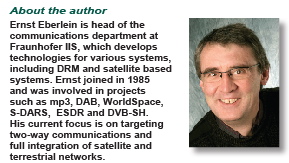 The two system approaches — DRM as the terrestrial individual-station digital radio standard and satellite-based broadband multiplex services — should therefore be considered as complementary and not as direct competitors. It even may be partly feasible to combine the systems. If large coverage areas have to be combined with local information, a combined solution may become attractive. Core technologies like the audio coding schemes and, increasingly, data applications are very similar. Audio broadcasting today benefits from combinations of attractive music, up-to-date information for all users and information channels focusing on special interest groups. 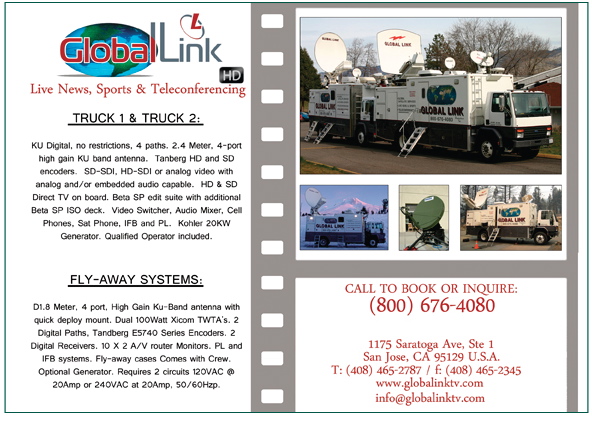