A five satellite launch on behalf of KARI

Innovative Solutions In Space has been selected by Korea Aerospace Research Institute (KARI) for the launch of multiple CubeSats through ISIS’ ISILaunch services for small satellites. 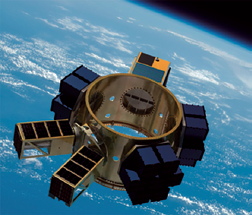 ISIS will be responsible for the launch of five satellites during 2015, developed under the first rounds of the University Cube Satellites Mission and Design Contest in Korea.

ISIS co-founder and marketing director Abe Bonnema said, “We know most of the involved teams already as customers for our subsystems and equipment, and it’s great to be able to launch their satellites now as well.”

“We are pleased to have found the experienced partner we were looking for in ISIS—Innovative Solutions In Space for the launch of the CubeSats of our national CubeSat contest, supported by KARI”, according to Dr. Gi-Hyuk Choi, Director of Future Convergence Tech Division of KARI. “We look forward to having these first CubeSat contest satellites launched next year.”

The CubeSats, of various sizes, were developed by Chosun University, Chungnam University, Korea Aerospace University, Kyung Hee University and Yonsei University, and will be manifested by ISIS in its QuadPack deployer systems onboard the 2015 Sherpa launch of ISIS’ U.S. launch services partner Spaceflight Inc.

Origins of the Universe Observation Mission is given the green light...

The Near Infrared Spectrograph (NIRSpec), developed and built by Airbus Defence and Space, and the Mid-Infrared Instrument (MIRI), built by a European consortium led by the company, have successfully passed a 120-day cryogenic vacuum test campaign within the Integrated Science Instrument Module (ISIM) of the James Webb Space Telescope (JWST).

This test was the second of three at NASA’s Goddard Space Flight Center in Washington D.C. and the first with all flight science instruments installed in ISIM.

The NIRSpec and MIRI instruments have been provided under a European Space Agency (ESA) contract. After launch in 2018 on an Ariane 5 from Europe’s spaceport in Kourou, French Guiana, the JWST will detect and analyze the very faint light from the first stars and galaxies that formed in the Universe.

During the test campaign, supported by Airbus Defence and Space, the thermal vacuum chamber at NASA cooled the ISIM and its instruments to their operating temperatures, around 38K (-235°C) for NIRSpec and 6.7K (-266°C) for MIRI. It took about three weeks for the instruments to reach these temperatures. Then the instruments underwent dedicated functional and performance tests and extensive check-outs.

Following the completion of this test campaign, the ISIM will be put in its flight configuration and will then be subjected to acoustic, vibration and electromagnetic compatibility testing to simulate the launch environment.

The third and final ISIM thermal vacuum test will be performed in 2015, verifying that ISIM and all science instruments are working as specified before delivering ISIM to the next level of the telescope integration and testing.

NIRSpec will be capable of measuring the spectrum of up to one hundred objects simultaneously. That will enable NIRSpec to observe large samples of galaxies and stars at unprecedented depths across large swathes of the Universe and far back in time.

MIRI, a combined camera and spectrograph for mid-infrared wavelengths, will extend JWST’s observation capabilities to longer wavelengths than covered by its other instruments, vital for the study of light from objects in the early universe or to peer inside dust clouds where stars and planetary systems are forming today.

“Our instruments represent the pinnacle of technology for modern astronomy,” said Head of Space Systems François Auque. “JWST will be hugely important in expanding our understanding of how our universe evolved. Especially NIRSpec is further proof of Airbus Defence and Space’s unrivaled expertise. We are proud to be supporting the scientific research that JWST will carry out.”

NASA, ESA, and the Canadian Space Agency (CSA) are collaborating to develop JWST, which will replace the legendary Hubble telescope and enable observation and measurement of infrared wavelengths. JWST will be able to study key phases in the evolution of the Universe in great detail—from the first stars and galaxies to form after the Big Bang to the formation of planetary systems in our own Milky Way galaxy today.

This will be made possible by JWST’s suite of four highly-sensitive scientific instruments and its huge primary mirror made of 18 hexagonal segments spanning a total of six and a half meters in diameter. JWST will be the largest astronomical telescope in space

For more information, please visit the Airbus Defence and Space infosite at http://airbusdefenceandspace.com/ 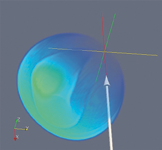 Based on the images from the SOHO and STEREO spacecraft, NRL’s Dr. Brian Wood reconstructed the 3-D morphology of the event, where the CME is modeled as a tube-like magnetic flux rope with a shock driven in front of it. The arrow indicates the Earth’s path through the event. Note that the CME’s flux rope misses Earth entirely—only the CME shock hits Earth. Synthetic images computed from this reconstruction are shown below the real images in the figure below. Image is courtesy of U.S. Naval Research Laboratory.

Wood is studying the solar origins of two of the strongest recent ionospheric disturbances over North America using observations from NRL-designed imagers on board NASA’s STEREO and SOHO spacecraft. “It is important to understand the kinds of eruptions from the sun,” Wood said, “that can lead to significant effects at Earth.” These two events had a significant effect on positional accuracy for the Wide Area Augmentation System (WAAS) satellite navigation system.

By some measures, the strongest ionospheric disturbances to happen over North America in recent years occurred on September 26 and October 24, 2011, Wood said. The fury of these two solar disturbances was revealed through their effect on the WAAS system, a network of ground-based reference stations that provide corrections to signals from Global Positioning System (GPS) satellites, leading to improvements in GPS positional accuracy.

The WAAS system is widely used in civil aviation within the United States, including for landing approach procedures requiring high positional precision. The September 26 and October 24 disturbances produced the largest degradations in WAAS service since 2007.

Based on the images from the SOHO and STEREO spacecraft, NRL’s Dr. Brian Wood reconstructed the 3-D morphology of the event, where the CME is modeled as a tube-like magnetic flux rope with a shock driven in front of it. The arrow indicates the Earth’s path through the event. Note that the CME’s flux rope misses Earth entirely—only the CME shock hits Earth. Synthetic images computed from this reconstruction are shown at the bottom of this page after the real images posted on the previous page.

Wood traced the origin of these disturbances to coronal mass ejections (CMEs), massive bursts of solar wind and magnetic fields that erupted from the Sun two days prior to the ionospheric storms observed at Earth. He has reconstructed the three-dimensional structure and kinematics of the two CMEs using images from the NRL-designed instruments aboard STEREO and SOHO spacecraft. Wood modeled the two CMEs assuming a magnetic flux rope morphology, which is a tube-shaped structure wrapped in a helical magnetic field.

On September 26, 2011, a strong ionospheric disturbance occurred over North America that resulted in significant degradations to the WAAS (Wide Area Augmentation System) air navigation system, used to assist in GPS-based instrument landings at airports throughout the US. This event was due to a coronal mass ejection (CME) launched at the Sun on 2011 September 24. The images across the top were taken by NRL-built instruments on NASA’s SOHO and STEREO spacecraft. The bottom images are synthetic images computed based on the 3-D reconstruction of the event shown in the next figure. These images are courtesy of the U.S. Naval Research Laboratory.

Kinematically, the September CME reached 1700 kilometers per second near the Sun before decelerating to 1000 kilometers per second. Wood noted that this event was surprisingly geoeffective, considering that Earth only received a glancing blow from the shock that formed in front of the CME, with the CME ejecta missing Earth entirely.

The October event was slower, only reaching 700 kilometers per second, but it provided a more direct hit on Earth. Both events arrived at Earth during daytime over North America, maximizing their impact on the US.

Looking forward, Wood is hopeful that this research will improve the ability to evaluate and forecast solar events that can significantly degrade navigation systems here on Earth.

“The ultimate goal,” Wood said, “is to be able to predict in advance the effects of a solar storm on communications and navigation at Earth. Characterizing the sources of geoeffective solar storms is a necessary step in that direction.”

For more information, visit the NRL homepage at http://www.nrl.navy.mil/

With the upcoming launch of iDirect’s Evolution® iDX 3.3.1, Layer 2 over Satellite (L2oS) service providers will soon have the option to run an iDirect network in a Layer 2 bridging mode as an alternative to the traditional Layer 3 mode architecture. 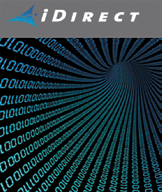 This approach expands flexibility. A service provider can implement a variety of network architectures, pass any Layer 3 protocols desired, and easily modify Layer 3 settings after deployment.

L2oS enables new satellite service delivery models based upon carrier-grade Ethernet and facilitates converged services so that a satellite network can behave like a mainstream access network.

L2oS emulates a standard Ethernet connection across the satellite link, forming an end-to-end network and transparent pathway for Layer 3 traffic

iDirect equipment no longer participates in routing, Layer 3 protocols, or higher layer functions. iDirect’s Protocol Processors and remotes serve as Ethernet switches that maintain MAC tables to make forwarding decisions based entirely on the information in the Ethernet header, passing entire Ethernet frames over the air. As a result, the Intelligent Platform behaves not unlike a simple Ethernet cable from the port entering the hub Protocol Processor to the port exiting the site remote.

L2oS could be considered as an expressway for information transport. A road carries any type of vehicle swiftly from point A to point B. The infrastructure doesn’t care if it’s a car, truck, or motorcycle. Changes in traffic patterns have no impact to the underlying highway.

The iDirect infosite may be accessed at http://www.idirect.net/