In March of 2008, Hughes Network Systems (HNS) announced having shipped 400,000 satellite VSAT terminals with DVB-S2 and Adaptive Code Modulation (ACM) capabilities. HNS shipments of DVB-S2/ACM terminals now account for almost 30 percent of a cumulative 1.5 million broadband terminals ever shipped by the company. When seen in the overall satellite broadband context, it appears that DVB-S2 satellite broadband is well into the growth phase of adoption, with 2008 reaching a critical mass of shipments and semiconductor vendors fueling positive feedback toward new networks and replacements.

ViaSat and iDirect, among others, have also been active and have announced deployments and plans for DVB-S2. ViaSat has shipped DVB-S2 compliant terminals since 2006, and iDirect recently announced the successful evaluation of its new eVolution platform with DVB-S2 ACM support.

Hughes’ leadership in the shipment of DVB-S2 satellite terminals with ACM is linked to the use of application-specific integrated chipsets (ASIC), network scale, and a first-mover advantage that dates back to the time when the DVB-S2 specifications were defined.

In 2003, Hughes demonstrated that a 1960s all-but-forgotten coding algorithm called Low-Density Parity Check (LDPC) was a better choice than turbo coding for the new DVB-satellite specification. It was believed that LDPC could achieve better performance than turbo coding and (more importantly) at a more efficient memory-to-CPU economic trade-off. The adoption of LDPC by the DVB Forum in the DVB-S2 spec caught leading semiconductor companies and set top box vendors off-guard. It gave HNS a timing advantage to license LDPC implementations to semiconductor companies and push ahead with the introduction of DVB-S2 with ACM. 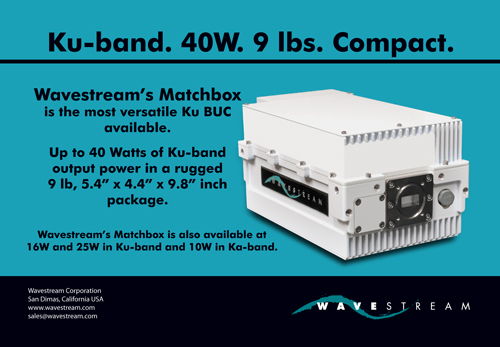 Leading semiconductor companies naturally devoted initial efforts to the development of ASIC chipsets for the large broadcast sector seeking the efficiencies that DVB-S2 could bring in combination with MPEG-4 AVC, particularly for HDTV. DVB-S2 chipsets used in broadcast applications support only the Constant Code Modulation (CCM) mode of operation, which provides 25-30 percent performance improvements over DVB-S, but it is in the use of ACM where the largest gains are for unicast applications transported over rain sensitive Ka-band and Ku-band satellite broadband links.

Most satellite broadband vendors needed to rely on programmable chipsets (FPGA) for quicker time-to-market of ACM-compliant DVB-S2 satellite terminals. But higher component cost for terminals pushed the solution to the high-end of the users’ spectrum.

As volumes increase, dedicated ASIC chipsets offer greater performance at lower cost—Hughes was the only vendor in 2007 with an ASIC-based solution. This situation is expected to change in 2008, as at least one leading semiconductor company is likely to diffuse the technology to a wider range of broadband vendors that will incorporate ASICs into less expensive DVB-S2 ACM satellite terminals.

One of the key aspects of HNS success in single site DVB-S2 satellite broadband is that the company was able to tap into a large base of users and a first mover advantage to gain an early lead. Its size allowed Hughes to afford the development of ASIC-enabled terminals because the company had also climbed up the learning curve substantially by the time it presented LDPC as a viable option within the DVB standardization efforts. Thus, HNS pushed for the inclusion of LDPC in the open standard and simultaneously benefited from its” know-how” in LDPC and scale as natural diffusion barriers.

DVB-S2 with ACM can be considered “the holy grail” of industry standard performance in satellite modulation, but it is just one aspect of the satellite broadband business where vendors push to differentiate via proprietary extensions or through proprietary systems. DVB-S2 is not the only solution to ACM, and it was, in fact, introduced perhaps too late for the technology to have captured an even larger portion of the single-site broadband sector. At least two years before the first DVB-S2 ACM terminals hit the market in 2006, IPStar and ViaSat had already developed proprietary ACM solutions to address the attenuation issues of Ka/Ku-band, limiting the market size for DVB-S2 satellite broadband primarily to new networks and upgrades to existing DVB-S based systems.

DVB-S2 effectively brings a quantum leap of efficiency to satellite broadband with the advantage of open migration because of backward compatibility with DVB-S. To smooth out providers’ adoption of the technology, vendors will increasingly tend to ship satellite broadband indoor units with DVB-S2 forward compatibility regardless of the service provider’s plans to make the transition to DVB-S2. This driver is gradually growing providers’ installed base of DVB-S2 compliant end units and will erode the collective switching costs that deter providers from making a complete upgrade to the systems. With a growing base of DVB-S2 compliant terminals, the balance inclines towards faster ROIs facilitated by savings in satellite capacity, a situation that ultimately allows broadband vendors to capitalize on hub upgrades.

Satellite broadband and IP trunking is projected to be the second largest market for DVB-S2 equipment shipments, after DTH and satellite Free-to-Air (FTA) video, and is one of the applications analyzed by NSR in its recent report “MPEG4 and DVB-S2: Assessing Implementation Schedules for Advanced Video Compression and Satellite Modulation”. Hughes’ DVB-S2 is a good example of the opportunities that DVB-S2 will present to satellite broadband over the next five years and shows how “coopetition” can lead to reward maximization, building an early lead and pulling even farther ahead than through proprietary discontinuities.

About the author
Carlos Placido has more than 12 years of progressive experience in the areas of consulting, program management, research and engineering in telecommunications and entertainment. Mr. Placido has carried out independent business development, technology assessment and management activities, including market research studies for NSR, assessment of regional business potential for vendors and project management at Telefonica. pioneering high-speed satellite LAN-to-LAN.