At first look, the headline may seem to be an unusual combination of continents to compare and contrast. Africa is about three times the population of South America, twice the area and more than one and half times more dense in terms of people per square kilometer. South America on the other hand, has a GDP per capita that is almost four times that of the African continent.

Both regions have contributed one country each to the BRICS viz. Brazil and South Africa. Both continents have close ties to their northern counterparts (Europe and North America) in terms of language, video distribution platforms and connectivity. Both continents have also played host to the FIFA World Cup, an event known to attract viewers—and hence consumption of satellite capacity—from across the globe.

However, what makes the comparison interesting is that while Africa has seen almost all satellite operators launch capacity for the region over the last five years, for South America that phase of a “supply boom” is expected to play out over the next half decade. This is a fact that warrants the question above—will this amount to over capacity, excessive competition and eventually, falling prices (read lower revenues and margins)?

Are There Trends Behind The Launches?
For starters, Africa has about 48 satellites in service currently that carry C-and/or Ku-band capacity in the 50 West to 95 East orbital arc that allows fairly decent look angles into the continent. For South America, albeit a smaller region, that number for its orbital arc is about 38 satellites in service. Now that may suggest nothing extraordinary; of those numbers, between 2009 and 2012, a span of only four years, there were about 25 launches over Africa, whereas the number for South America was a mere nine satellites. 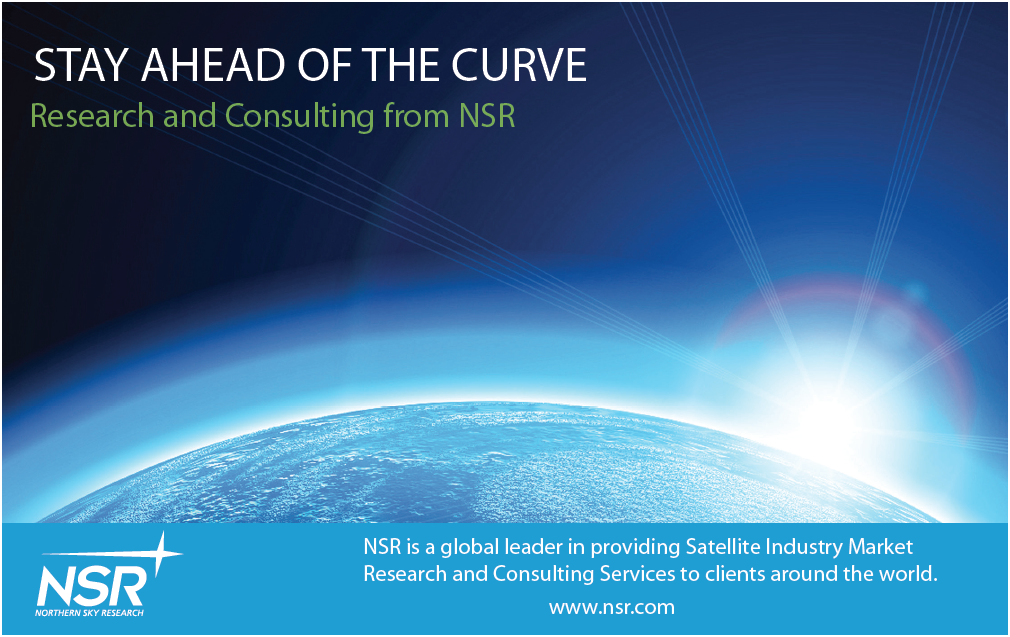 Clearly, the operators had decided that there was a gap left by fiber in the African market that only satellite could help fill. What they perhaps had not anticipated was that the near monopoly in the video distribution markets in Africa would not change drastically, and that VSAT operators would eventually consolidate as fiber became more prevalent. All this while more and more operators laid their claim to the promise of Africa, thereby leading to increased competition and eventually lower fill rates and falling prices.

South America, on the other hand, becomes the region in focus if you now look at how much capacity is coming online in the next three to five years. There are about 18 satellites announced for South America carrying either C- / Ku- or HTS capacity, whereas the figure for Africa is about 15 satellites. In terms of TPEs of C-, K-u and Ka-band capacity, South America is expected to add about 850 TPEs by 2018, as compared to only 750 for Africa by the same period.

The difference becomes extremely evident when looking only at HTS capacity, measured in Gbps. Here, the figure for South America is at 100 to 125Gbps by 2018, as compared to only 50 to 60Gbps for Africa. Now this figure does include Brazil’s SGDC-1, which is not entirely a commercial payload, but that does not rule out its role in Digital Divide programs. Despite all the “unconnected” markets that Africa offers compared to a more robust fiber network for South America, the HTS capacity coming online for data services is just under half for Africa!

What Does This Discrepancy Mean?
For starters, South America is benefiting from the lessons learned on HTS systems in other parts of the world, namely North America and Europe. The applications are largely data driven and, even there, more suitable for consumer broadband. 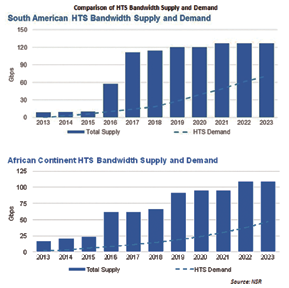 As an application, that has demanded a higher purchasing power and disposable income from the population that lives beyond the reach of terrestrial solutions. At $10,000 GDP per capita for South America, versus $2,500 for Africa, it now begins to seem obvious why there are fewer HTS birds for the latter. In addition, the geo-political climate in South America is one of a large dominant economy (Brazil) versus two to three growing economies (South Africa, Kenya, Nigeria) that make the former region perhaps easier to navigate for those launching HTS-based services.

Additionally, the video markets in Africa remain somewhat closed, with MultiChoice still maintaining incumbent status and smaller players yet to gain significant ground. South America offers a much more vibrant DTH market and, with penetration rates of digital TV still low, the potential headroom remains attractive. All of these factors point toward there being more easily addressable demand, which leads to more supply, for the South American market.

Does More Supply Mean Excess Supply?
This, then becomes the multi-million dollar question as to whether South America will suffer the same fate as Africa in the longer term with excess supply. The supply over Africa has been, and will be for some time, largely FSS, i.e., traditional wide beam C-, Ku- and Ka-band. This is suited for video and data markets and, while it typically means higher cost per bit for data, there have been players such as Yahsat and Avanti that have brought arguably cheaper Ka-band capacity into the African data market. Despite this, fill rates over Africa remain low (in the sub-55 percent% range) and are expected to continue this way until supply additions slow down. Will South America suffer a similar fate?

The answer is two-pronged and varies depending on whether it is video or data markets one addresses. For video (effectively FSS supply and demand), South America seems to be offering enough opportunities between now and the 2016 Brazil Olympics. Even after that inflexion point, there are enough countries with Analog Switch-Over plans to keep fill rates ticking upwards for the region on the video side.

For data, however, the answer is not as straightforward. Yes, there seems to be a consumer broadband market for the taking in the suburban and remote areas of Brazil and few other countries. There are even quite a few USO-driven Digital Divide programs run by the Government that would be happy to run on HTS capacity that lowers the cost per bit.

However, and other developed markets have shown, that Government-backed rural broadband programs don’t always work according to schedule. In addition, if there are too many HTS systems lowering the cost per bit, then it becomes a problem of plenty and this is where NSR believes that there could be over supply in the near term. A corollary to lowering the cost per bit is, of course, opening new applications and markets such as mobility (aeronautical, maritime or land-mobile) and video contribution that could foster demand and stabilize fill rates in the longer term.

If one only looks at launches and amount of FSS and HTS capacity coming online, it does seem that South America is going down the same path as Africa. However, it may not be as slippery a slope, as the situation in Africa was different. Africa saw FSS oversupply as a result of fiber expansion and geo-political challenges in markets that had satellite demand.

South America is ahead of Africa with respect to fiber. Not to say that it isn’t expanding, but growth in the former is more evolutionary, as major fiber routes (land and submarine) were deployed years ago and the market has absorbed them. NSR advises operators in South America to actually recall Finance 101—compound opportunity in the present and discount projections of the future.

About the author
Based in Mumbai, India’s commercial capital, Mr. Butani joined NSR in February of 2008 and currently holds the title of Senior Analyst. He has authored first editions of NSR’s Direct-to-Home and Satellite Manufacturing & Launch studies along with providing coverage of the satellite and telecom market in India, Middle East and Africa. His areas of expertise include Satellite Capacity Supply & Demand, Direct-to-Home, Satellite Manufacturing, Satellite Launch and Emerging Media Applications. For client specific projects, he has worked on topics as diverse as Satellite Broadband, MILSATCOM, M2M and Equipment Manufacturing. Mr. Butani has also been a speaker at Satellite 2010, Satellite MENA and user meets organized by both Indian Space Research Organization (ISRO) & industry.

Mr. Butani obtained his Masters degree in Satellite Communications Engineering from the University of Surrey in Guildford, United Kingdom. During this time he was actively involved with the European Space Agency’s SSETI project for student-built space missions. He also worked closely with Surrey Satellite Technology Ltd. (now part of Astrium), the satellite manufacturing company on campus focusing on Spacecraft Engineering. Mr. Butani also co-founded the Surrey chapter of the UK Students for Exploration and Development of Space (UK SEDS) society.

After graduating with distinction, Mr. Butani worked with Inmarsat and Avanti Communications in London. At Inmarsat he studied RF engineering of COTM and COTP applications for BGAN’s Land Mobile extension. From there he moved onto Project Management for Avanti’s Hylas-1 satellite. While at Avanti, Mr. Butani also consulted to the European Joint Research Centre and European Space Agency under FP6 and FP7 programs. Mr. Butani then moved back to India to join Bharti Airtel in their VSAT business in Middle East designing network solutions for banking and retail customers. For improving pre-sales process efficiency at Bharti, Mr. Butani was awarded the Yellow Belt in Six Sigma Quality Management. In India, Mr. Butani has collaborated with the Indian Institute of Technology, Bombay and S.P. Jain Institute of Management and Research in varying capacity. 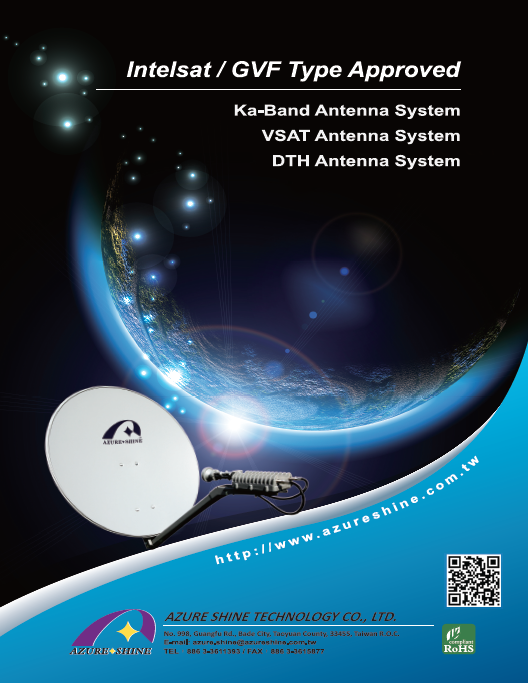