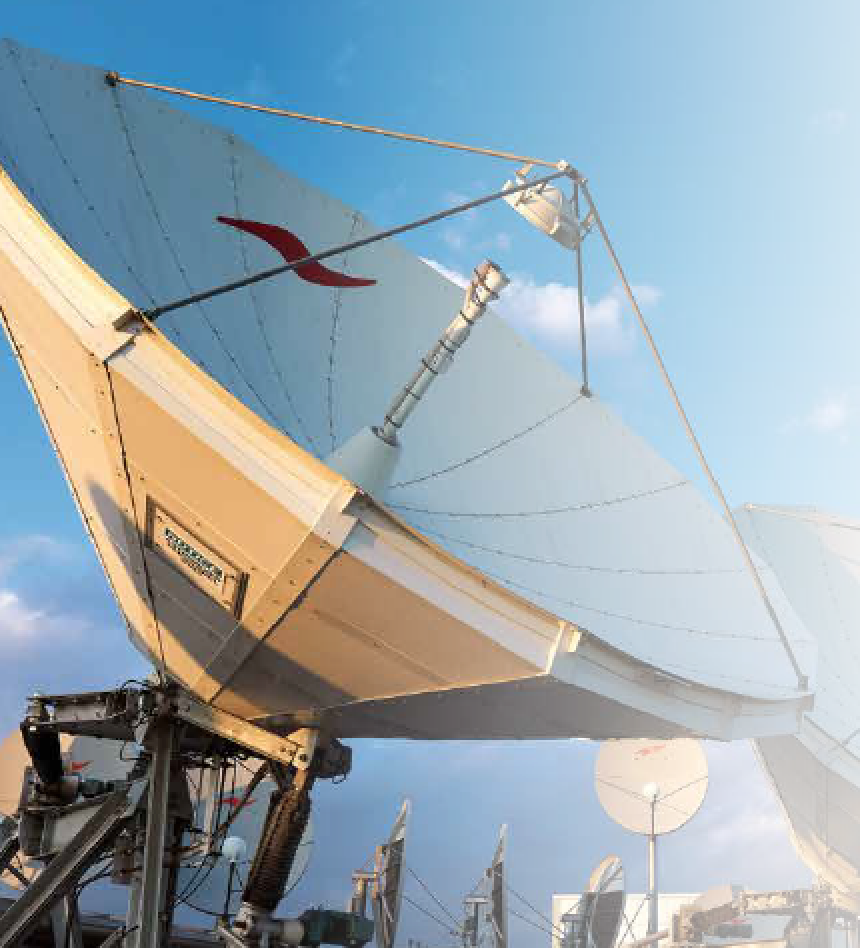 At first glance, the installation and functioning of ESAs in a facility seems to be a pretty straight forward business, but on closer examination, there are numerous outside influences and obstacles that can interfere with the fundamental purpose of the antenna and create challenges for the teleport where the antenna is located.

In example, the infamous C-band and the frequency overlap with the mobile industry presents teleports with radio-frequency interference (RFI). Electromagnetic interference (EMI), also referred to as RFI, is a disturbance generated in the radio frequency spectrum by an external source that affects an electrical circuit by electromagnetic induction, electrostatic coupling, or conduction. The disturbance may degrade the performance of the circuit or even stop it from functioning.

In the case of a data path, these effects can range from an increase in error rate to a total loss of the data. Both man-made and natural sources generate changing electrical currents and voltages that can cause EMI: ignition systems, mobile cellular networks, lightning, solar flares, and auroras. EMI can affect mobile phones, FM radios, and televisions, as well as observations for radio astronomy. 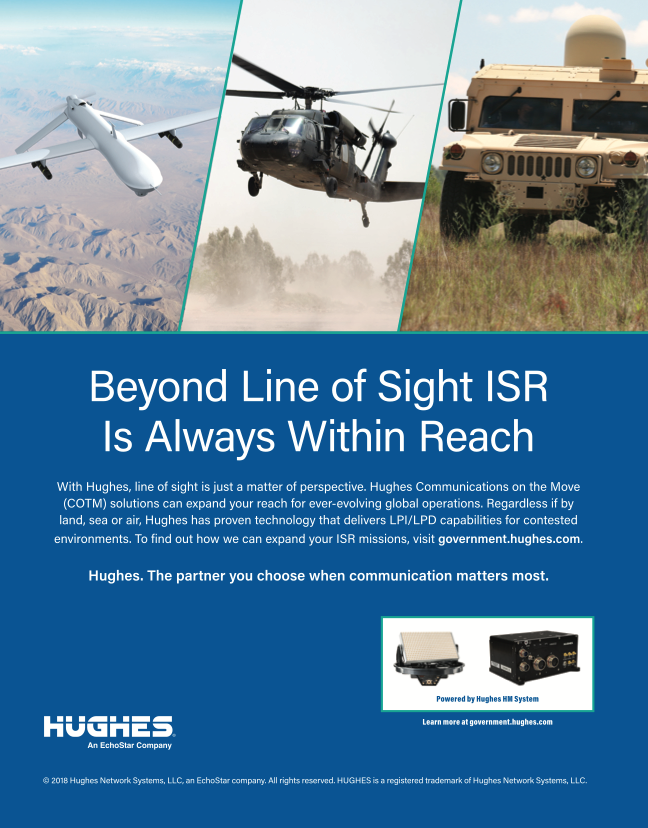 Any wire can accidentally become a good antenna if its length happens to be, say, the wavelength of a strong local FM station. Sources of RF interference fall into two broad categories — intentional and unintentional. Intentional sources include AM, shortwave, FM, and broadcast transmitters as well as ham and CB transmitters, remote controls, wireless phones, cellular phones, commercial taxi/police/aircraft radios, microwave ovens, motion sensors, radar systems, and a myriad of medical and industrial
RF devices.

Therefore, the number one rule before setting up an ESA is to check for potential interference. If these initial checks are not carried out, a teleport faces high risks from possible degradation of service to not being able to provide a service at all.

“Interference is not hard to find; it is actually difficult to avoid, especially in urban areas where the wireless revolution is well underway,” said this article’s author.

With this in mind, think of the advantages of the strategic location and position of the newer, purpose built teleports, as opposed to restrictions of the older adapted telecoms, which are often positioned in more urban areas.

After assuring a RFI-free area, what other challenges await? The answer to this question depends on what frequency will be used.

The lower the frequency the less challenges there are and vice versa. As C- and Ku-band frequencies are saturated, increasing numbers of satellite operators will deploy Ka-band. The Ka-band is a portion of the microwave part of the electromagnetic spectrum defined as frequencies in the range 26.5 to 40 gigahertz (GHz), i.e., wavelengths from slightly over one centimeter down to 7.5 millimeters. 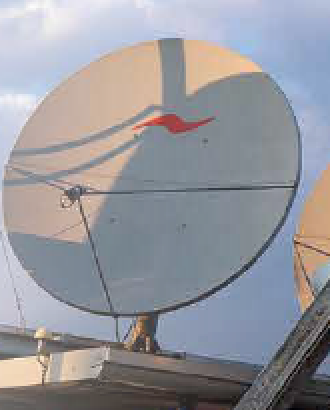 The band is called Ka-, short for “K-above,” as this frequency is the upper part of the original NATO K-band, which was split into three bands due to the presence of the atmospheric water vapor resonance peak at 22.24 GHz (1.35 cm), which made the center unusable for long
range transmission.

The 30/20 GHz band is used in communications satellites, uplinked in either the 27.5 GHz and 31 GHz bands and high-resolution, close-range targeting radars aboard military airplanes. Some frequencies in this radio band are used for vehicle speed detection by law enforcement agencies. The 5th Generation (5G) mobile networks will also partially overlap with Ka-band (28, 38, and 60 GHz).

Imagine you’re in a restaurant and the place is nearly empty. You can talk to your companions using a low-volume, easy and relaxed voice — then, more patrons start arriving and the restaurant becomes more and more crowded. The noise level rises — you have to shout to be heard. There’s no room to move.

That is a picture of the demands on the world’s communication frequency bands. Cellular phones, streaming entertainment, data communications, civil and commercial providers; they are all placing incredible strains on available spectrum bandwidth.

It’s similar to the difference between the television antennas perched on houses decades ago that used transmission frequency called VHF or Very High Frequency and the satellite antenna dishes used today that use a much higher frequency, 50 times higher than VHF.

Those old antennas worked on frequencies that delivered one channel at a time whereas the TV antenna technology of today uses higher frequencies to deliver hundreds of shows to viewers.

However, operating in Ka-band requires new hardware and software. To perform uplink in the Ka-band requires precision. With technologies such as sub-reflector tracking which is used at STN teleport, the company significantly reduce errors in precision by enhancing sub-millimeter Earth station tracking.

In summary, the Ku- and Ka- frequency bands each have their merits. Ultimately, the application requirements and available services should determine the appropriate band for a teleport’s operations — be that for the military, remote office or media broadcast. 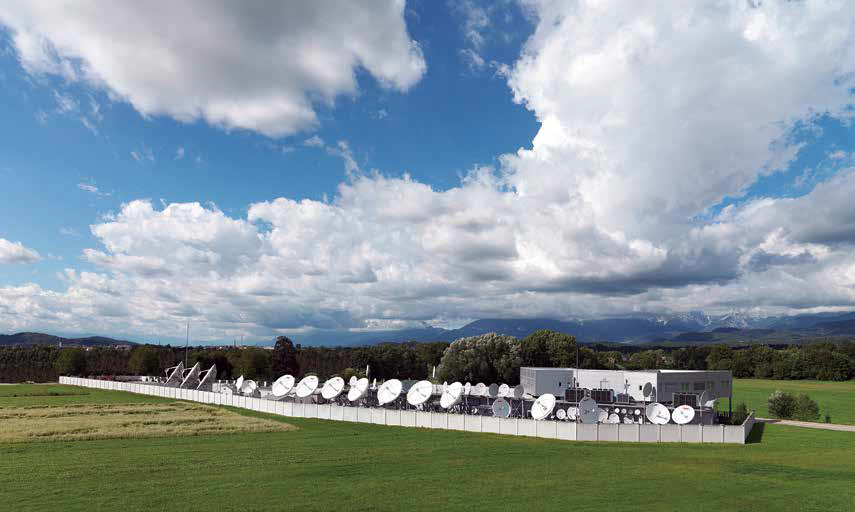 Ka-band can offer greater throughput than similar sized Ku- systems. This frequency is perfectly suited for customers on the move and other applications where terminal size and weight are important factors in making purchasing decisions, such as with military or media organizations.

For more dependable throughput in extreme weather conditions, Ku-band wins the battle as the lower frequency range lends itself to a lesser impact by environmental factors.

However, as mentioned previously, due to the implementation of new mitigation technologies and availability of hybrid-band systems, Ka-band solutions are able to alleviate adverse weather conditions and maintain a similar level of reliability to their Ku-band counterparts.

As the more established technology platform, Ku- is currently available in more regions around the world. However, today many Ku- satellites are becoming saturated. This means that guaranteed levels of service performance may not be available where needed for a particular application.

As a relatively new phenomenon, the Ka-band service is currently only available in select regions, but with the launch of more satellites and service offerings, that situation will likely change in the coming years as Ka-band coverage catches up with its Ku-band competitor.

The smallsat industry has seen rapid developments in more recent years and can be attributed to continuous requirements in technology and the demand for broadband connectivity in remote locations all around the world. Low Earth Orbit (LEO) and Geostationary (GEO) satellites are key players in this industry.

Smallsats deliver a bright future for the indispensable antenna and the unit’s ability to track and communicate with these lower orbit satellites. However, they, in turn, need to be smaller, lighter and faster s well as positioned in more key locations around the world.

STN is constantly studying market trends and planning for the future. The company is now moving forward with its plan to extend its dish farm with another 7,500 square meters of adjacent land. This means that, for STN and the teleport’s customers, there is potential for a plethora of new and exciting projects.

The antenna has always underpinned teleport services, providing the main link between the earth station and the satellite, and these critical pieces of equipment will continue to serve our industry.
www.stn.eu

Author Jurij Blazin is the Technical Director of the STN Teleport.