During 2009 (up to the time of writing in mid-November), 59 launches placed a total of 104 satellites in orbit. It is expected that during the last weeks of the year, another 11 launches will take place, boosting the satellites by an additional 11 in number. These satellites were for the following purposes: 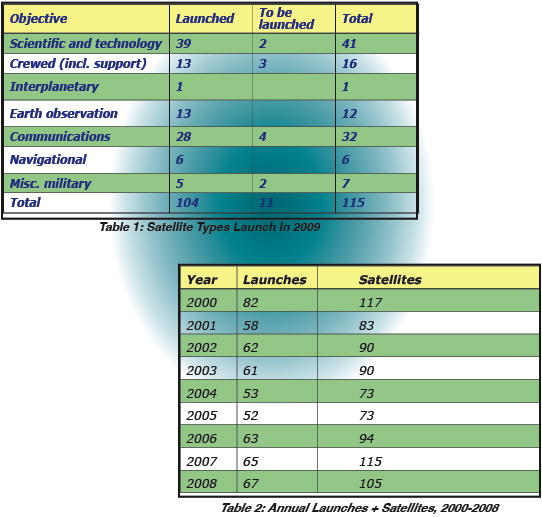 This will bring the number of spacecraft launched since 1957 to 6,206, with 63 countries or international agencies being responsible for the satellites. The latest country that joined the ‘space club’ was Switzerland with the launch of the SwissCube satellite on September 23rd, 2009.

Iran joined the select number of countries that launched their own satellite when on April 25, 2009, a Safir launch vehicle placed the Semnan technology satellite in orbit.

North Korea tried to do the same on April 5, 2009. Although North Korea asserted that this was a communications satellite that was placed into a 490 x 1426 km orbit, transmitting the favourite songs of Kim Jung-il, the general belief is that, in absence of verifiable tracking data, the launch was a failure and the stages of the rocket fell into the Pacific Ocean. The efforts of Iran and North Korea caused concerns in western circles.

The United States’s Space Shuttle fleet completed a further four (plus one in late November) flights, all of which were in support of the operations of the International Space Station. Another five flights remain to be conducted in 2010 before the orbiters are retired.

The chosen launch vehicle to replace the Space Shuttle made its first test flight on October 2009. The objective of the Ares 1-X flight was to simulate the launch vehicle’s first stage burnout and separation from the dummy upper stage. The launch vehicle was powered by only four segments of the first stage, with the fifth segment being replaced by an inactive segment. 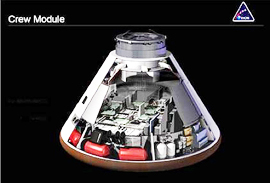 The vehicle also carried mock-ups of the upper stage and the Orion crew module (Orion Boilerplate-1) and launch abort system. The vehicle reached an altitude of 46 km and no hardware was placed in orbit — the solid rocket motor separated and was later recovered from the Atlantic Ocean. The simulated upper stage and Orion’s crew module and launch abort system were not recovered. The Ares launch vehicle will be developed into the Ares V launch vehicle, with a first flight scheduled for 2013. 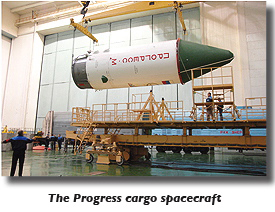 During the year, the International Space Station will have provided docking space for five Space Shuttle missions, as related above, four Soyuz TMA missions and six Progress cargo transfer spacecraft.

In addition the first Japanese HTV cargo spacecraft was docked at the space station for some time. 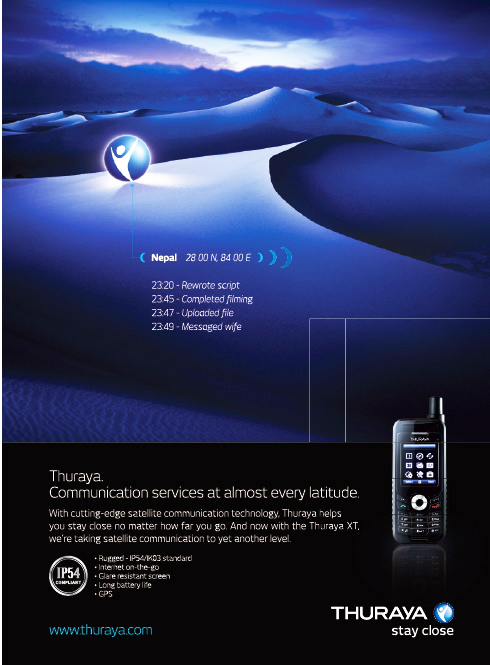 The year also saw the addition of an another component to the Japanese Kobe facility and a new Russian docking port named Poisk or MRM-2.

The International Space Station is now in a configuration that can support a crew of six. Currently, the space station is commanded by European Space Agency (ESA) astronaut De Winne, the first time an ESA astronaut held this position. During the year, two so-called ‘space tourists’ visited the space station.
During 2009, astronauts and cosmonauts completed 159 hours of EVA time in support of the space station. Another 39 hours are expected to be made before the end of the year. This will bring the total EVA time spent on the space station to about 1632 hours.

Discussions are currently going on concerning the closing of the International Space Station. The United States is planning to start de-orbiting the space station in 2016 as there is no long term funding for its operation beyond 2015. In the meantime, Russia announced that it has plans to ‘recycle’ its modules for use in a post-ISS program that has not yet been defined, but may involve a new orbital outpost that could serve in space missions heading to the Moon and Mars. The European Space Agency and Japan are seeking an operational program beyond 2015 so they can make more use of their facilities on the station.

One of the more interesting spacecraft during the past year was the Lunar Reconnaissance Orbiter (LRO) to obtain the measurements necessary to characterize future robotic and human landing sites on the Moon. A suite of seven instruments identified potential lunar resources and made observations of the lunar radiation environment relevant to human biological responses. 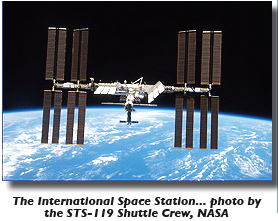 Accompanying the LRO were the separate Lunar CRater Observation and Sensing Satellite (LCROSS), as well as the launch vehicle’s upper stage, designed to impact on the south pole of the moon in the hope of finding evidence of water. The impacts took place on October 9, 2009, and the upper stage was impacted first. The resulting plume was observed by LCROSS. LCROSS itself impacted on the moon just a few minutes later. The impact location was an eternally dark depression on the south pole of the Moon, named Cabeus.

Finally, the Augustine Panel assessing U.S. manned space flight, presented five options to President Obama. The options vary, depending on the retirement date of the Space Shuttle, the International Space Station, as well as the development of the heavy launch vehicle needed to get spacecraft to the Moon as well as the launch vehicle needed to move crews into low-Earth orbit. Option 1 is essentially the Bush administration’s Constellation program.

The Panel noted that, whichever option is ultimately selected, “Human exploration beyond low-Earth orbit is not viable under the FY 2010 budget guideline,” and suggested funding increases at a minimum of about US$3 billion a year by fiscal 2014 and then growing with inflation at 2.4 percent per year. All Options indicate a return to the Moon by mid 2020.

The Panel also noted that... the project gap between the end of shuttle operations and the debut of a new spacecraft to replace it, will stretch at least seven years. 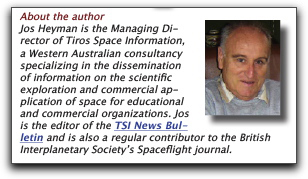 Commercial services to deliver crew to low-Earth orbit are within reach and a new competition with adequate incentives, should be open to all U.S. aerospace companies. This would allow NASA to concentrate on human exploration beyond low-Earth orbit based on the continued development of the current or modified Orion spacecraft.
Mars remains the “ultimate destination” for human exploration of the inner solar system.