Across the industry, we are seeing a growing importance and emphasis of data for a wide variety of purposes. Interference is no exception. If we have the correct data, and the ability to analyze and use of that data effectively, we can make great headway in resolving interference.

At the Space Data Association (SDA), we have been working with other industry associations, as well as our members, to determine what data is needed and in what format to effectively combat interference.

The SDC was established by the SDA to ensure that adherence to the fundamental principles established by the SDA, namely, to allow the controlled, reliable and efficient sharing of data critical to the safety and integrity of the space environment and the RF spectrum. The system operates to safeguard the SDA member data and to allow communication to other members of the information needed to react correctly to a collision risk situation. Today, the SDC is active in assuring the safety of members’ satellites and spacecraft and provides a collision warning system.

Work is underway to extend the services that the SDC can provide from what exists today to more Radio Frequency interference orientated services, such as automatic Geolocalization Solution Set calculation and a Carrier ID database. The original SDA principle is applied; to share data in a secure manner, to safeguard and improve operations in space.

When interference occurs, especially when there is no CID available for the interfering carrier, geolocation is an important tool for quick and efficient location of that carrier. The more we can improve that process, the better for those suffering interference.

We are currently working on implementing this new feature into the SDC—the concept behind it is that, based on a description of the RFI event, the SDC will analyze critical payload data for the victim and adjacent satellites. This will enable the system to compute optimum satellite pairings for geolocation and generate a set of data that can be downloaded into a member’s geolocation system, including accurate ephemeris data for the two satellites.

SDC already contains all the data concerning the satellite locations and ephemeris data as part of its conjunction warning function. We are, however, currently working to collect all the data elements that are needed for identifying geolocalization solution sets, such as frequency bands, conversion frequencies, coverage areas, cross strapping configuration, and reference carriers etc. 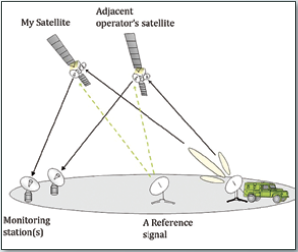 AGI is proceeding with development of a prototype system, based on data collected so far by Eutelsat, Intelsat, and SES, for three of their own satellites, specifically selected to have other operators satellites in close proximity. The prototype system will be manual; however, once we have validated the proof of concept, the idea would be to move towards an automated system. By early March, we hope to have the proof of concept available for initial testing and will be able to provide updates on that during various interference-related meetings at Satellite 2015.

Carrier ID Database
The Carrier ID (CID) Database is an important part of the success of the Carrier ID initiative and has been a huge focus for IRG, SDA and other significant industry groups over the last couple of years.

In its most elementary form, the minimum information contained in an active CID data stream would typically be the MAC address or reference number of the modulator being used to make the transmission. When an Earth station is registered with a satellite operator, this information needs to be added to the Earth station registration information (for each modulator and updated by the earth station operator if it changes). The satellite operator will be implementing a mechanism where all the CID numbers that he has linked to earth stations in his database will be provided to the SDC.

It is, of course, possible for an Earth station operator to fill in more fields in the CID field so that a faster and more direct approach can be made without resorting to the SDC. 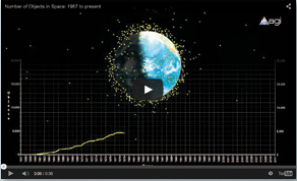 To view this informative AGI video that illustrates the number of objects in space from 1957 to the present time, please access https://www.youtube.com/watch?feature=player_embedded&x-ytcl= 84503534&x-yt-ts=1421914688&v=6Qf6VIvLGZk

The CID Database will only contain the CID numbers and the name of the satellite operator whose customers they belong to. As an Earth station operator, you simply need to check you have CID-ready products, and if so, ensure it is switched on and tell your operator so that they can enter the information into their own internal and CID database.

Last year, we set ourselves the target of the World Cup in June to have a prototype database ready. We managed to reach that target and were able to support CID transmission on broadcast carriers during the event. It was also a valuable learning exercise for us, and we are now working on some further refinement of the database for future implementation.

Last year, we also announced that the CID database would be available to all satellite operators, not just SDA members. This is really important, as for any of these initiatives to be successful we need widespread implementation, and our members get additional benefits for their membership.

The tools available to satellite operators within their monitoring systems are now available so that the CID information can be read and recorded at any time—this would normally take place at the time of the satellite access.

Future Updates
The two functions described above are a priority for us . However, in the future, we see other useful functions being added to the SDC to help resolve RFI more quickly and efficiently. These include distribution of RFI alerts, RFI prediction for LEOP / drifting satellites, and administrative logging and reporting functions.

All in all, we are working towards a system, which includes and can analyze as much data as we can conceivably feed in to help us an industry improve information sharing efficiencies, the safety of flight of satellites and spacecraft, and the quality of services by space based communication systems.

* Also, the Global VSAT Forum (GVF), Space Data Association (SDA), and Satellite Interference Reduction Group (IRG) will be hosting a series of meetings at Satellite 2015, starting with the SDA User’s Meeting on the afternoon of Monday, March 16th at the Intelsat office, followed by the GVF Interference Prevention Summit on the morning of Thursday, March 19th, in room 209 AB at the conference center. IRG will be hosting an interference workshop on the afternoon of Thursday, March 19th, and all day Friday, March 20th, at the Intelsat office. 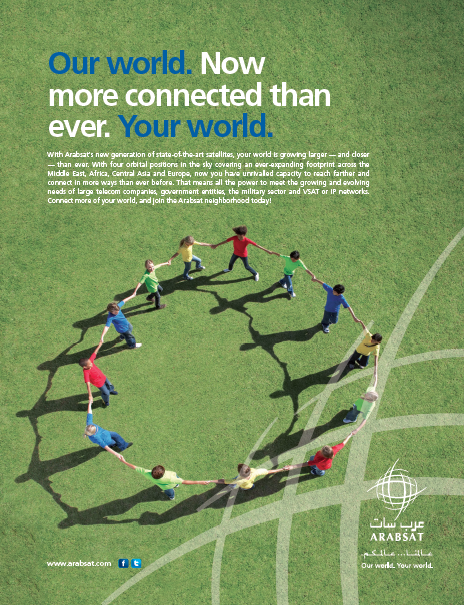