The African continent is bound to become increasingly more dependent on the space industry for job creation, poverty alleviation and sustainable resource management. 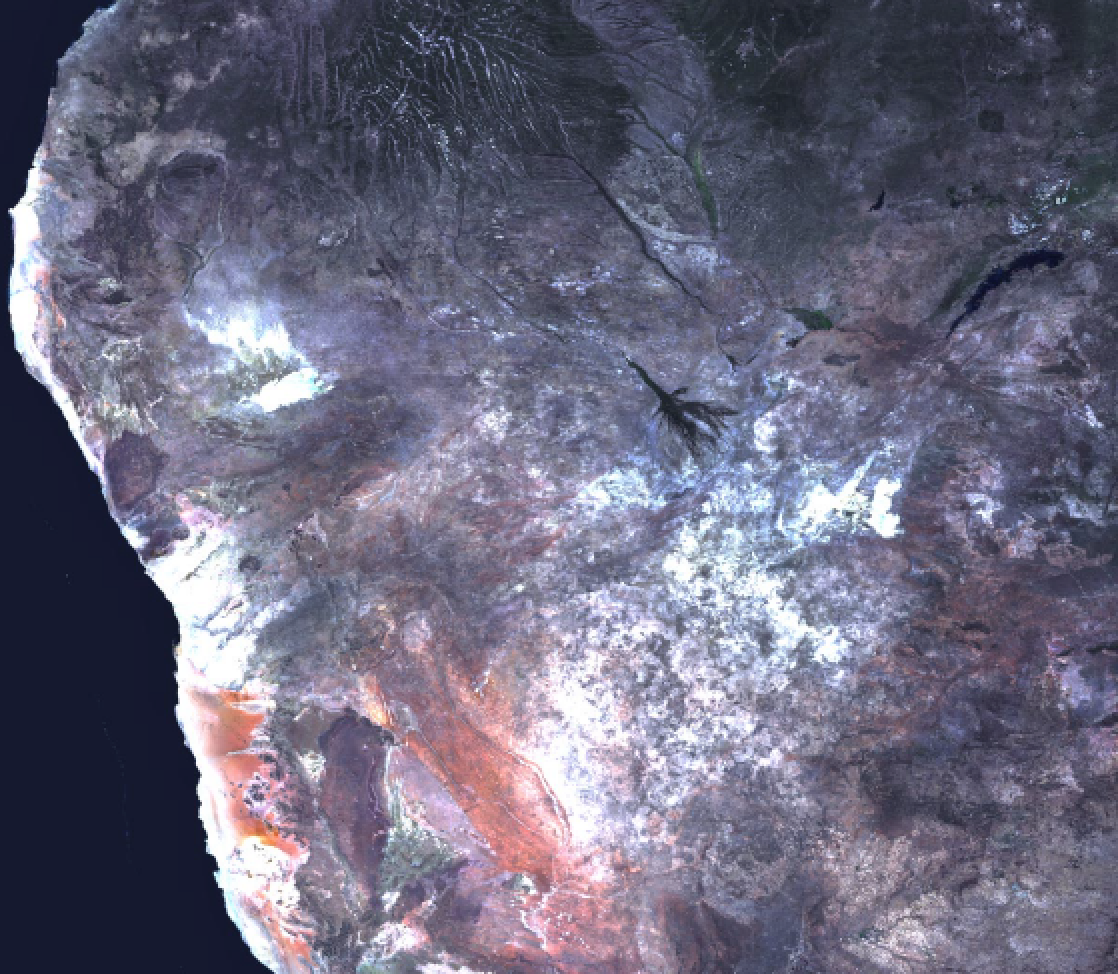 Africa, the second largest continent, is a mix of steamy rainforests,
vast grasslands, and arid deserts. It has no long mountain ranges,
but is home to the world's largest hot desert, the Sahara, and its
longest river, the Nile. The featured area is the central South Atlantic
coastal region of Namibia, including the cities of Walvis Bay and W
indhoek. Image capture is courtesy of the United States
Geological Survey

These were some of the findings in a paper recently published by an expert in the field of Earth Observation (EO) and Geo-Information Sciences.

The paper, titled “The Status of Earth Observation (EO) & Geo-Information Sciences in Africa — Trends and Challenges” was published in the journal of Geospatial Information Science, by Professor Tsehaie Woldai* in February of this year. Woldai is a Visiting Professor at the School of Geosciences, University of the Witwatersrand, Johannesburg, South Africa.

In his research, he found that up to the end of last year, 28 of the 54 African countries were already engaged in the EO and Geo-Information Sciences through 90 academic institutions, 17 national scientific associations, 53 national space agencies, 10 satellite receiving and tracking stations as well as a few regional, technical laboratories. While the industry currently provides employment to some 15,000 people on the African continent, Woldai expects this number to exceed 100,000 by the year 2025.

The growing dependence of the continent on the satellite industry is also clear from the fact that by the end of last year 11 African countries have already launched 36 satellites together into orbit while another five are expected by the first quarter of 2021 plus another five by 2025, thus amounting to 46 satellites, a total not foreseen ten years ago.

The reason for Professpr Woldai’s optimism is that this industry can, without being trapped by the continent’s poor infrastructure, cost effectively address some of its most pressing problems. Africa faces huge challenges in environmental protection and management, water resources, food security, mining and forest management, marine protection, urban and regional planning, transportation and disaster risk reduction. 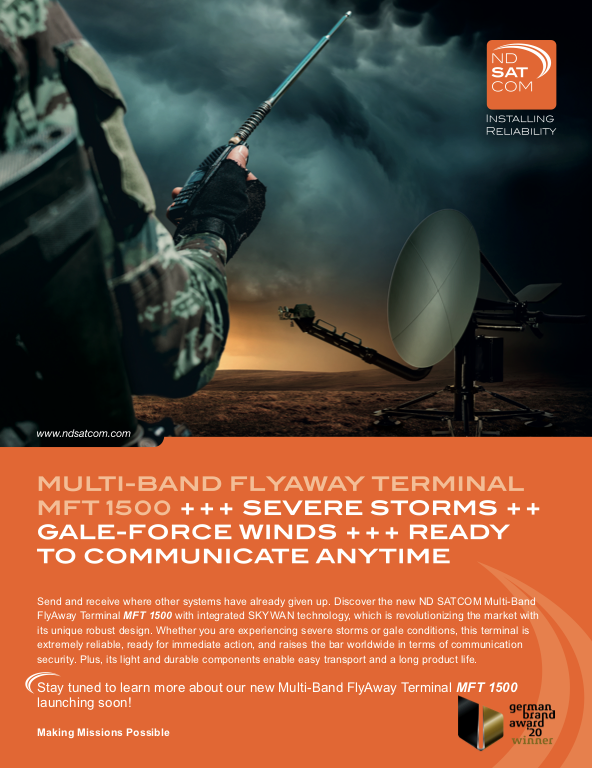 Being an academic, Woldai believes that harnessing the power of the academic institutions to reduce poverty is not an ideological aspiration but an empirically, demonstrable fact. In his opinion, universities have proven to be the only sustainable institutions in Africa. Time and again, they have withstood the upheavals that have occurred across the continent and are of national pride to every country within which they are located. Applied research is also one of their core businesses — at least in Africa.

He is , therefore, optimistic about the future of the growth and application of EO and Geo-Information Sciences across the continent, provided there is solid co-operation between the public sector (government ministries and departments); academic institutions (universities/colleges/national or regional Centers); space agencies; and private sector companies. His success recipe for this sector are based on the following:

1. A well-informed public sector to develop a strategy and architecture for space exploration and space data thus creating an empowering environment so that the benefits of public-private partnership can be appreciated

3. A thriving private sector to serve as an engine for economic growth.

His optimism is further bolstered by the fact that space-based technology is now an essential tool for decision making in many African countries. Also, the technology is extensively used by Government Ministries/Departments in monitoring climate-related changes, agriculture, desertification, flood hazards, and soil erosion, as well as, risk assessment, groundwater exploration and transportation services.

Using freely available or own space-based data (optical, radar and hyperspectral), they have managed to save time and costs to acquire valuable baseline information and update their resource maps. Additionally, the increased affordability of personal computers, micro-electronic equipment and ever-improving telecommunication services give greater access to the internet in many parts of Africa.

Efforts to build capacities for managing EO/RS and geo-information in Africa span more than three decades. Traditionally, much of the capacity building had been at regional centers (such as AFRIGIST formerly RECTAS in Nigeria, the defunct Regional Remote Sensing Center in Ouagadougou, Burkina Faso and RCMRD in Kenya) or abroad, by way of training few professionals, mainly from the surveyor-general departments or universities and equipping these organizations in map-making and related activities. 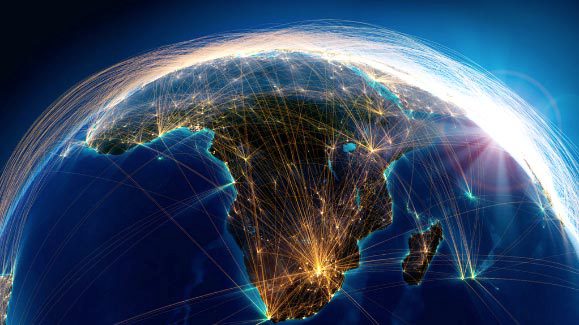 Image is courtesy of EIS-Africa.

Today, African Universities contribute to societal capacity by functioning as nodes in a global network of knowledge. The majority of them provide dedicated geomatic, remote sensing and geoinformation science education and training. While 11 percent of the universities and colleges are known to offer three to seven day GIS courses to undergraduates; around 23 percent have degrees and research programs leading to BSc, MSc, and PhDs.

The creation of new companies over the last few years and their development clearly shows that the African private sector companies are steadily growing in 28 of the 54 countries of Africa. Encouraged by the moderate success booked in the 2016 African Private Sector Survey questionnaires, another such survey was conducted in 2019. The number of people employed by 2019 increased by 66 percent (from 2719 in 2016 to 4109). In terms of revenues, all responding companies performed in a range from $500,000 to $5 million/year. Some companies from Ethiopia, Ghana, Kenya, Nigeria, and South Africa have taken the opportunity to open subsidiary companies in other East and West African countries.

Numerous networks which facilitate the exchange of information and promotion of excellence in the field have also come into being all over Africa. Some with a Pan-African character include the African Association of Remote Sensing of the Environment (AARSE); AfriGEOSS (part of the Global Earth Observation System of Systems - GEOSS); the Environmental Information Systems Africa (EIS-AFRICA); and the University Network for Disaster Risk Reduction in Africa (UNEDRA).

The African continent, with more than a billion people, has been one of the rapidly growing economies in the world during the last eight years. It is no wonder, therefore, that the continent is awakening to look into space-based EO and Geo-Information Sciences technologies and investment to proliferate, harness and use the benefits that this technology offers.

The sudden increase in the deployment of satellites by the African States might appear irrational to some, especially as the continent has numerous pressing issues affecting the livelihood of its population. These problems, however, can be tackled using space-based EO and Geospatial techniques, to a certain extent.

Professor Woldai concluded that if Africa is to ‘leapfrog’ its obstacles effectively, the continent needs to invest in science and maths education at schools and develop an indigenous critical mass of trained space scientists, engineers and programmers at universities. The continent must build its capabilities in ICT infrastructure, satellite communication, navigation and positioning, and space sciences. Internet connectivity is another barrier to development that should be tackled.

Professor Woldai’s full article can be read at this direct link...

Professor Tsehaie Woldai, Ph.D., is currently a Visiting Professor of Geological Remote Sensing at the School of Geosciences, University of the Witwatersrand, Johannesburg, South Africa.

He has worked for many years at the Faculty of Geo-Information Science and Earth Observation (ITC), University of Twente, Enschede, The Netherlands. Woldai expertise is in structural geology, environmental geology, remote sensing (optical, radar and hyperspectral) and mineral exploration. He has taught in over 40 universities in Africa, Asia, Europe, North and South America.

For many years, he was involved in many of the ISPRS Commissions and Working Group (as Chairman/Vice Chairman/Secretary); and a track record in his engagement n over 40 national/international Advisory Programs and more than 20 international research investigation as the Principle or Co-Investigator.