The major use of remote sensing data has been to compare images of an area taken at different times and identify the changes it underwent. With a wealth of long-term satellite imagery currently in open use, detecting such changes manually would be time-consuming and most likely inaccurate.

EOS Data Analytics stepped in by introducing the automated Change Detection tool to its flagship product — LandViewer — which ranks among the most capable of cloud tools for satellite imagery search and analysis in today’s market.

Unlike the methods involving neural networks that identify changes in the previously extracted features, the change detection algorithm implemented by EOS is using a pixel-based strategy, meaning that changes between two raster multi-band images are mathematically calculated by subtracting the pixel values for one date from the pixel values of the same coordinates for another date.

This new signature feature is designed to automate your change detection task and deliver accurate results in fewer steps and in a fraction of the time needed for change detection with ArcGIS, QGIS or another image-processing GIS software. 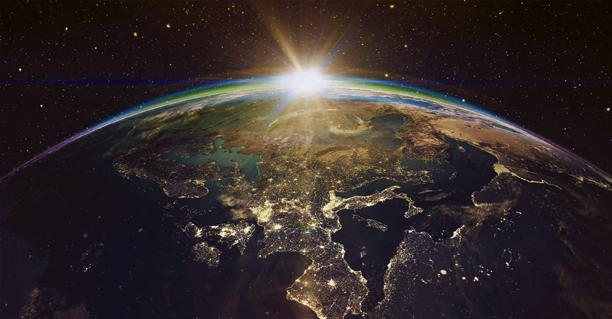 Unlimited Applications Scope
One of the main goals set by EOS team was to make the complex process of change detection in remote sensing data equally accessible and easy for non-expert users coming from non-GIS industries.

With LandViewer’s change detection tool, farmers can quickly identify the areas on their fields that were damaged by hail, storm or flooding. In forest management, satellite image detection of changes will come in handy for estimation of the burned areas following the wildfire and spotting the illegal logging or encroachment on forest lands.

Observing the rate and extent of climate changes occurring to the planet (such as polar ice melt, air and water pollution, natural habitat loss due to urban expansion) is an ongoing task of environmental scientists, who may now have it done online in a matter of minutes.

By studying the differences between the past and present using the change detection tool and years of satellite data in LandViewer, all these industries can also forecast future changes. 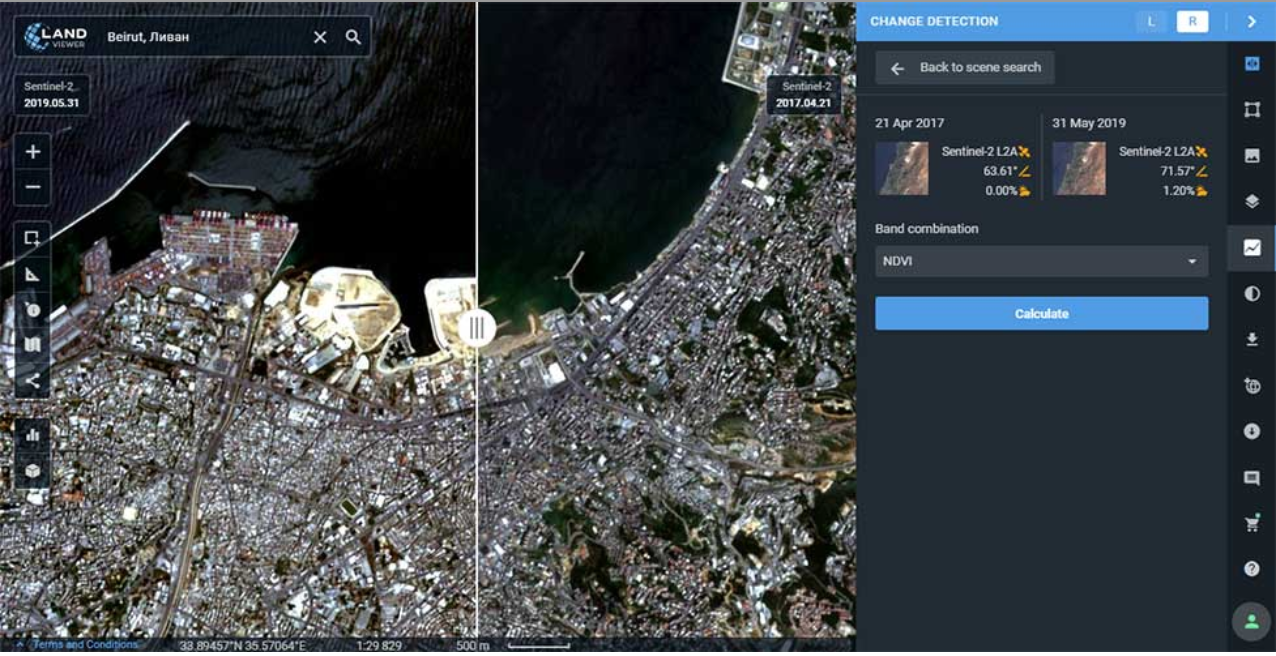 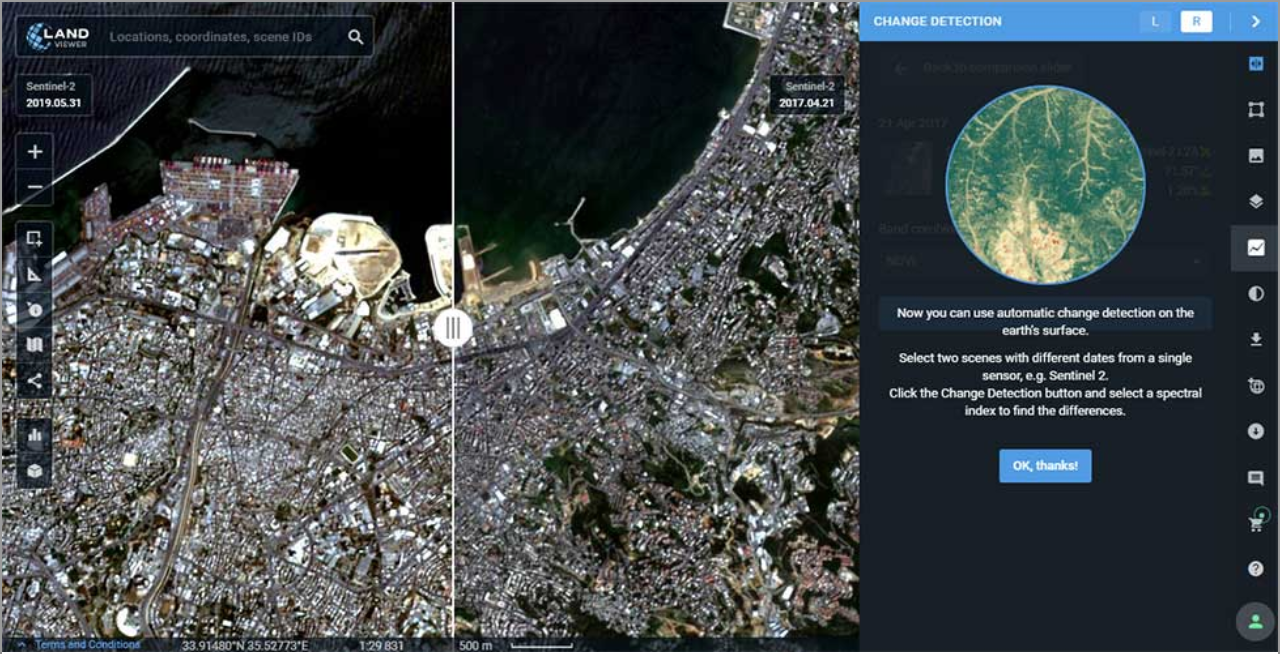 Change detection interface. Images of Beirut city coastline selected for tracing the developments of the past years.

A picture is worth a thousand words and the capabilities of satellite image change detection in LandViewer can be best demonstrated on real-life examples.

Forests that still cover around a third of the world’s area are disappearing at an alarming rate, mostly due to human activities such as farming, mining, grazing of livestock, logging, and also the natural factors like wildfires. 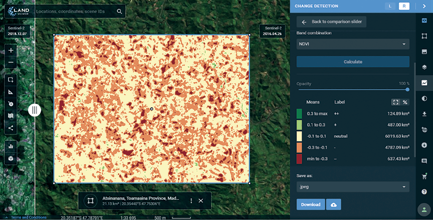 A difference image showing the extent of deforestation in Madagascar
between 2016 and 2018; generated from two Sentinel-2 satellite images.

Instead of massive ground surveying of thousands of forest acres, a forestry technician can regularly monitor the forest safety with a pair of satellite images and the automated change detection based on NDVI (Normalized Difference Vegetation Index).

How does it work? NDVI is a known means of determining vegetation health. By comparing the satellite image of the intact forest with the recent one acquired after the trees were cut down, LandViewer will detect the changes and generate a difference image highlighting the deforestation spots, which can further be downloaded by users in .jpg, .png or .tiff format.

The surviving forest cover will have positive values, while the cleared areas will have negative ones and be shown in red hues indicating there’s no vegetation present. 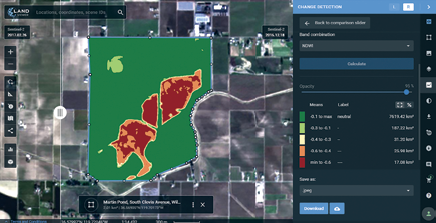 Results of Sentinel-2 scene change detection: the red and orange areas represent the flooded part of the field; the surrounding fields are green, meaning they avoided the damage. California flooding, February 2017.

Another widespread use case for change detection would be agricultural flood damage assessment, which is of most interest to crop growers and insurance companies. Whenever flooding has taken a heavy toll on your harvest, the damage can be quickly mapped and measured with the help of NDWI-based change detection algorithms.

Running Change Detection in LandViewer
There are two ways to launch the tool and start finding differences on multi-temporal satellite images: by clicking the right menu icon “Analysis tools” or from the Comparison slider — whichever is more convenient.

Currently, change detection is performed on optical (passive) satellite data only; addition of the algorithms for active remote sensing data is scheduled for future updates.