In 2017, Kymeta introduced the world’s first commercial flat-panel, electronically scanned antenna (ESA) for satellite communications based on a revolutionary metamaterial surface technology. The light weight, low profile, and lack of moving parts allow this antenna to be easily mounted on land vehicles, aircraft, and maritime vessels to provide them with global high-throughput connectivity. 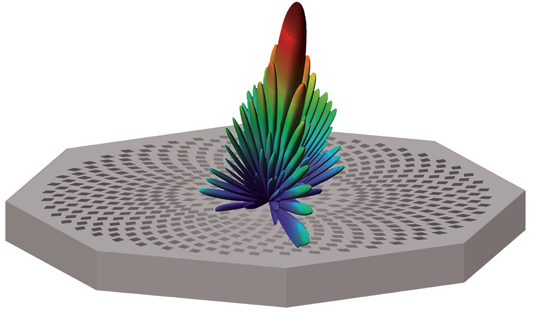 Metamaterials and Metasurfaces
Metamaterials are synthetic materials that are engineered to provide electromagnetic properties not found naturally, such as a negative index of refraction [1].

Such a material is called a negative-index metamaterial. In natural materials, properties such as magnetic permeability and electric permittivity are determined by the response of the material’s atoms and molecules to the electromagnetic wave passing through it. But in metamaterials, these properties are determined by the periodic arrangement of scattering structures that are smaller than the wavelength of the electromagnetic waves they are interacting with. 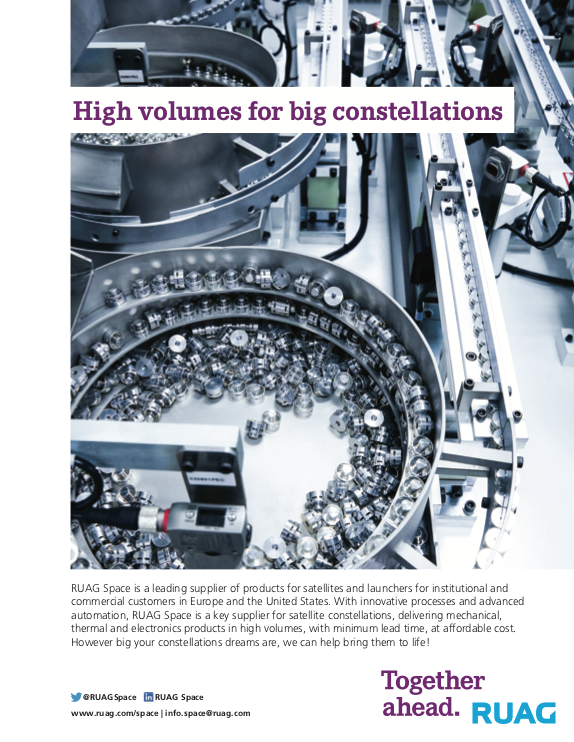 These small structures are fabricated from conventional materials such as metals and plastics, but their size, shape, orientation, and configuration can be designed to interact with electromagnetic waves to create finely tuned resonances and other unconventional properties in certain frequency bands (see Figure 1 on the next article page).

These special properties can be used for a wide variety of applications; for example, to enhance the efficiency and directivity of microwave patch antennas. Continuing research in metamaterials is yielding devices such as microwave antennas, radar absorbers, lenses, and phase compensators, and optical superlenses that are not diffraction limited [2].

If electrically small (subwavelength) scatterers are arranged in a regular array on a surface that is electrically thin, similar results as those achieved by three-dimensional metamaterials can be obtained.

Metamaterial surfaces, or metasurfaces, have the advantage of taking up less physical space than metamaterials and can also have less loss. They’re also less expensive, as scattering elements can be printed using standard lithographic techniques.

Kymeta Metamaterial-Surface Antenna Technology (MSAT)
Kymeta’s implementation of metasurface technology is distinct from the approaches described above. Principally, Kymeta uses a diffractive metasurface, rather than a refractive one to define an antenna beam holographically. This holographic approach to beam forming inherently relies on tuning the resonance frequency of each antenna element to implement a dynamically reconfigurable diffraction grating.

To create an antenna, the metasurface, which is printed with hundreds or thousands of elements in a periodic array, is placed adjacent to the broad wall of a rectangular waveguide feed structure that couples all the elements to a radio frequency wave generated by a single transmitter (Figure 2). 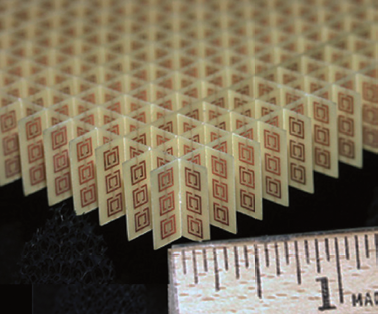 Figure 1. Metamaterials have subwavelength structures made of
conventional materials that yield unconventional properties.

Each of the elements is tuned by computer control to resonate at a frequency and scatter (radiate) the guided wave. The elements that are physically spaced such that their radiated waves are in phase (coherent) at the desired scan angle of the antenna beam (which is the sum of the waves radiated by the elements) are tuned to scatter strongly, while the elements that are out of phase are detuned so as not to radiate (Figure 3).

The scan angle is defined as the angle between the beam and an axis that is perpendicular to the plane of the antenna metasurface. This method of forming an electromagnetic beam is known as holographic diffraction and Kymeta’s commercial approach to fabrication is called metamaterial-surface antenna technology (MSAT).

The metamaterial-surface flat-panel satellite antenna technology developed by Kymeta is well suited to mobile applications. Compared to conventional parabolic dish antennas, which must be mechanically pointed at a satellite using a gimbal mount, it is slim and light, and since the beam is electrically steered to track satellites, it has no moving parts.

Kymeta’s Ku-band antenna is about 30 inches wide and can be horizontally mounted on vehicles and vessels to provide high throughput two-way communications anywhere a satellite is available.

The Kymeta metasurface uses the controllable permittivity of liquid crystals to tune each radiating element, and the design is compatible with liquid crystal display (LCD) fabrication processes, positioning this technology for high-volume production by leveraging the established manufacturing infrastructure of the LCD industry.

MSAT Compared to Active Phased Arrays
Another type of electrically steered flat-panel antenna is the active phased array. This also forms and steers a beam by the constructive and destructive interference of waves emitted (or received) by a regular array of many small elements.

However, this type of array has an RF transmitter/receiver circuit driving each element to control the amplitude and phase of the element’s radiation. A computer determines the pattern of in-phase elements needed to produce the desired beam direction.

Cost
Due to the large number of discrete RF circuits, the active phased array has a high material cost that scales with the size of the aperture. Additionally, these elements must be individually calibrated (a 1- to 2-day process) because the RF chips have both gain and phase variation. Contrarily, Kymeta’s TFT manufacturing process is precise, so Kymeta antennas require significantly less calibration time. This simplicity reduces overall cost, making connecting with the Kymeta antenna the affordable option.

Form factor
The single-aperture phased array antenna can’t operate in full-duplex mode. Kymeta antenna has a single aperture for transmit and receive, whereas the active phased array antennas on the market today require two separate apertures. This increases size and weight of the system, limiting the number of markets it can serve.

Performance
Kymeta antenna requires minimal power to operate. The antenna itself uses approximately 15 W of power, whereas phased array antennas of a similar size consume nearly 1 kW. Because of the heat this can generate, many active phased array antennas require active cooling measures in their day-to-day operation. MSAT power consumption allows it to leverage existing power on mobile platforms, which reduces integration complexity.

• Reception and transmission from a single aperture. This is achieved by interleaving receive and transmit elements on the same substrate and controlling them independently.
• Dynamically adjustable polarization from linear to circular (right- hand circular polarization and left-hand circular polarization) [5]. This allows the antenna to work with different types of satellite polarization schemes without the need to modify or replace equipment.
• Full 360° azimuth scanning and elevation scanning below 15°.
• Compliance with ITU and FCC power spectral density (PSD) masks to minimize adjacent satellite interference, which can result from the beam broadening that occurs with increasing scan angle [6].

Table 1. Comparison of performance between 70 cm and 20 cm apertures.

Kymeta MSAT can be scaled depending on the data throughput that is needed. A 70 cm diameter aperture can deliver 10 Mbps with GEO HTS satellites.

With no moving parts, these antennas can be easily installed on almost any mobile platform, including trains, buses, automobiles, and vessels. 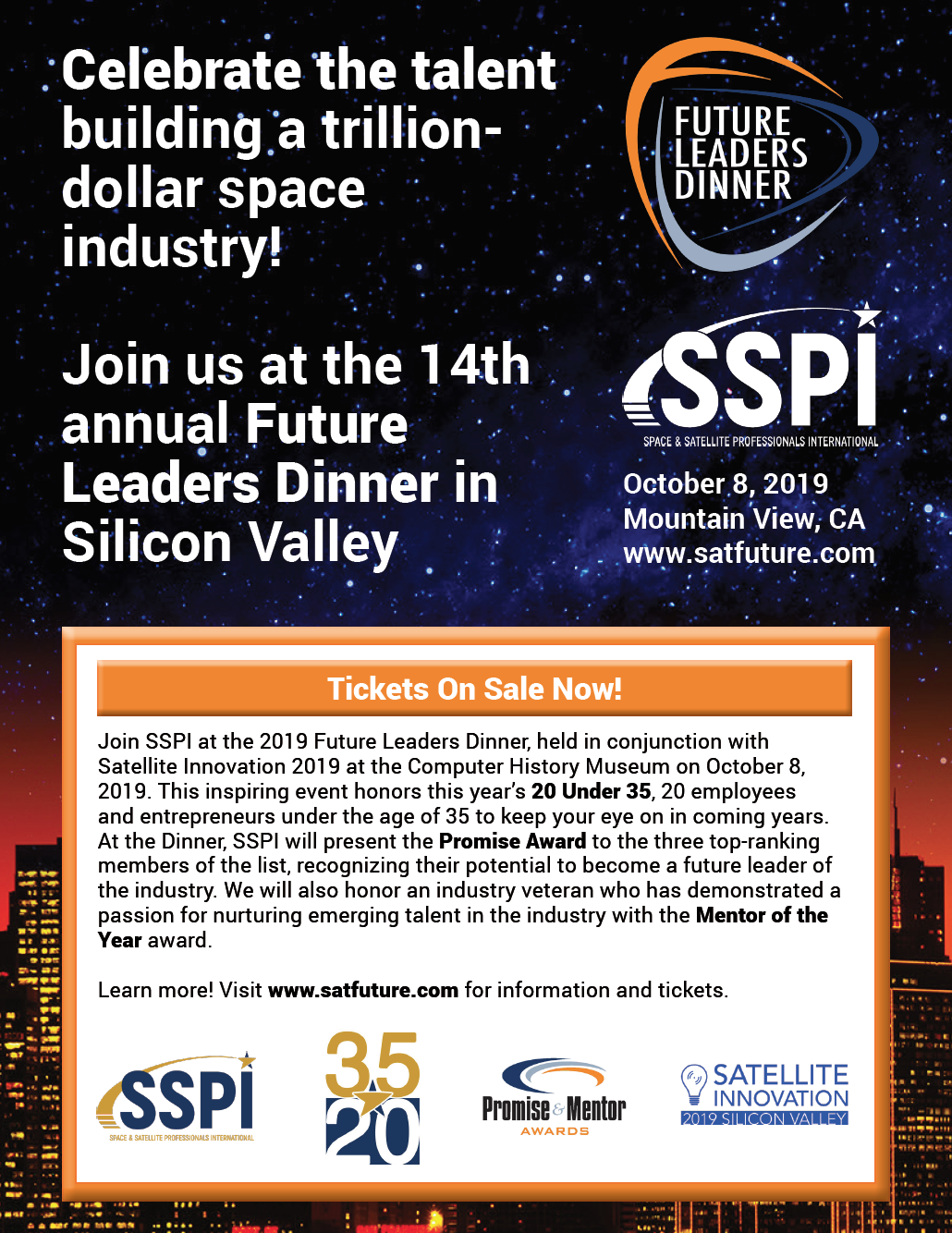