In the High Desert of California, the nation’s proving ground (and airspace) for advanced space launch vehicles, and the HQ for many of the companies of New Space, Interorbital Systems (IOS) engineers are hard at work preparing for a critical milestone in the development of the company’s NEPTUNE Rocket series.

Eleven commercial and educational CubeSat and TubeSat payloads are manifested on this flight. The rocket — a CPM 2.0/ N1 — is composed of four identical tanks containing the rocket’s storable propellants and pressurant gas. This regulated pressure-fed configuration was selected to increase engine performance, while at the same time reducing costs and manufacturing time.

During the test flight, the rocket will simulate an orbital launch trajectory by using the main rocket engine’s throttling capability to vary the thrust-to-weight ratio, thus simulating the actual conditions that will be experienced during an orbital launch. 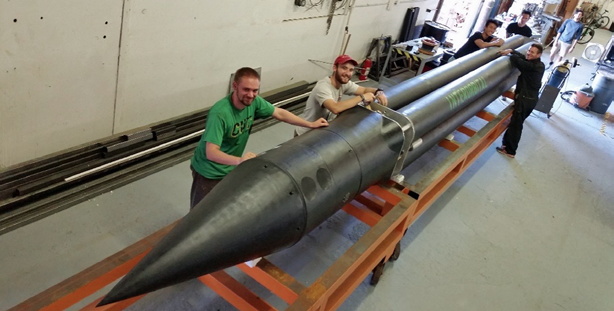 After the rocket passes through the transonic phase and Max Q, the engine will gradually throttle down, slowing the rocket until it begins to hover. At that point, the rocket engine will shut down and the rocket will be allowed to fall. At a safe altitude, a parachute will deploy for vehicle and payload recovery.

Following the test of the N1 GTV launch vehicle, the IOS team will construct an orbital version of the N1, which consists of a single CPM 2.0 and two liquid upper-stages. It will be capable of placing a 14 pound (6.4 kg) payload into a 192 mi (310 km) polar orbit — perfect for the dedicated launch of the new 3U-CubeSat plus 1U propulsion system assemblies now trending in the smallsat industry.

As the N1 launch vehicle is 36 feet (11 meters) in length, and weighs only 5,400 lbs. (2449 kg), this will be the smallest orbital launch vehicle in the world. The NEPTUNE 1 is also the world’s lowest-cost orbital launch vehicle, with a base price of $250,000 (academic price) per launch to a circular polar orbit at 310 km. The same single Common Propulsion Module that powers the N1 can be bundled into groups of three, five, or eight to meet increased lift requirements for payloads weighing up to 500kgs (1,100-lbs).

IOS NEPTUNE-1 being prepared for launch.

What’s Launching?
Interorbital offers the lowest-cost launch opportunities in the world for suborbital, orbital, and interplanetary missions. IOS will be testing its own guidance and control systems with the upcoming launch and will also provide the platform for demonstrating and flight-testing these significant science applications and breakthrough technologies:

Wayfinder II Mission
Wayfinder II is a 3U CubeSat designed and integrated by Boreal Space, NASA Ames Research Park, Moffett Field, California. The overarching mission of Wayfinder II is to raise the Technology Readiness Level (TRL) of technologies that are key to space science, exploration, and commerce. Boreal Space has created a unique hosted payload architecture that will house and flight-test the following four high-profile payloads aboard its Wayfinder II:

1. Spacelink Secure UHF radio
The Spacelink Secure radio, developed in collaboration with Space Inventor of Aalborg, Denmark, is a fully redundant UHF transceiver operating in the UHF band refined as a hardware pair with a ground station source for Internet of Things (IoT) connectivity experiments — AES/GCM Encryption addresses IoT security concerns. Spacelink is the first in a series of highly capable radios that are expanding into S- and X-band frequencies. These radios are low-power, lightweight solutions for CubeSat applications; the Spacelink radios are destined to be an enabling technology for various Use Cases including connected cars, oil and gas industry, agriculture, etc.

2. SHARK Payload provided by the Stanford University Extreme Environments Laboratory (XLAB) — http://xlab.stanford.edu
Stanford University’s XLAB is focused on the development of micro- and nano-systems for operation within extreme harsh environments. Researchers in Stanford’s XLab are investigating the synthesis of temperature tolerant, chemically resistant, and radiation-hardened wide bandgap semiconductor thin films and nanostructures.
These new material sets serve as a platform for the realization of sensor, actuator and electronic components that can operate and collect data under the most hostile conditions. More specifically, smart and adaptable structures for extreme environments are enabled through the technology developed in the XLAB; research efforts support a variety of applications including deep space systems, hypersonic aircraft, combustion monitoring, and subsurface monitoring.

With respect to Wayfinder II, the Extreme Environments Lab has created a hosted payload known as SHARK—1. The Principle Investigator for this effort is Karen Dowling, a Ph.D. candidate at Stanford. The purpose of this experiment is to test AlGaN (Gallium Nitride) sensors and others to measure magnetic fields, temperature, and radiation in orbital and suborbital levels.  Mitigation to susceptibility to extreme environments is an important area of research for LEO applications and beyond.

3. Graphene Experiment supplied by the Centre for Advanced 2D Materials,   National University of Singapore — Graphene Experiment provided by NUS and Wayfinder II
This is a 3U CubeSat Structure with experimental housing — The Centre for Advanced Two-Dimensional Materials (CA2DM) of the National University of Singapore (NUS) has partnered with US-based Boreal Space to test the properties of graphene material after it has been launched into the stratosphere.

During this launch, the graphene material will be subjected to rapid acceleration, vibration, acoustic shock, strong pressure, and a wide range in temperature fluctuations. The research team will retrieve the graphene material and will be testing its properties to see if it was able to resist the various challenges imposed by the launch environment. Technologies that push the limits in graphene research by demonstrating electro-magnetic shielding; efficient solar power generation; and excellent thermal protection.

Graphene, which is one of the crystalline forms of carbon, is a relatively recent discovery in 2004. Since then, a torrent of data has been uncovered by the academic community and industry on its advantages, including ultra-thinness, mechanical strength, heat conduction and electronic properties.

In this collaboration, a team led by Professor Barbaros Özyilmaz, head of graphene research at the NUS CA2DM, prepared the graphene material by coating a substrate with a single layer of graphene. This is about 0.5 nanometers thick, which is more than 200,000 times thinner than a strand of hair.

“Graphene is the lightest thin film in nature and 1 gram can cover 2,300 square meters of area. This extreme loss mass density is perfect for space applications such as sails for spacecraft. However, efficient space sails require high optical reflectivity so they can be accelerated by sun rays or lasers beams. Being one atom thin, graphene is mostly transparent. Nevertheless, state of the art nanotechnology can make graphene highly reflective by deposition of light atomically thin metal films on its surface keeping its mass still low enough. The Center for Advanced 2D Materials is currently developing such graphene sails and other devices based on 2D materials for space exploration,” said Professor Antonio Castro Neto, Director of the NUS CA2DM. “Space is the final frontier for graphene research. If this research collaboration is able to demonstrate that graphene maintains its various properties and features after the launch into stratosphere, this will open new opportunities for incorporating graphene into numerous technologies suitable for outer space and aerospace missions.”

Concurring, Ms Barbara Plante, President of Boreal Space, said, “We are dedicated to expediting access to space, and we believe that graphene plays an important role in that path, with structures and batteries for on-orbit space platforms. This launch is in support of such future uses in space.”

Mexican Space Collective
One of three Mexican smallsats scheduled to fly on IOS’ suborbital launch includes Juan Diaz Infante’s Project ULISES I TubeSat Arts/Music satellite. The other satellites are from UNAM and University of Zacatecas. At press time, following the recent 7.1 Mexican earthquake, IOS is awaiting word on their launch participation status. 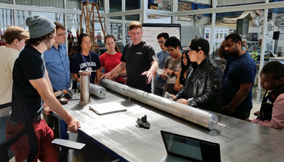 Google Lunar X PRIZE Team SYNERGY MOON Payload
Interorbital Systems, launch provider and member of the Google Lunar X PRIZE Team SYNERGY MOON, will fly its own team’s electronics and communication package. This is identical to the one slated to be carried by its lunar rover on the surface of the Moon on the suborbital launch of the CPM 2.0 GTV. The flight will test the comms unit’s behavior under the stresses of launch.

The NEPTUNE rocket test article that will carry all payloads listed in this article is also being tested on this launch for use as the main structural and propulsion component for SYNERGY MOON’s LUNA Moon Rocket, which it will fly in its bid to win the Google Lunar X PRIZE. Interorbital will use its NEPTUNE 3 (N3) LUNA, a 3-module, 4-stage NEPTUNE Rocket variant to carry the GLXP payload to the Lunar surface.

Interorbital’s Compton Rocket Academy
Interorbital has begun a series of rocket-building classes held weekly at Tomorrow’s Aeronautical Museum at the Compton/Woodley Airport. Each class is an exercise in workforce development with structured engineering and hands-on skills training organized and taught by Roderick Milliron who developed the curriculum with IOS partner and educator Randa Milliron. Students learn by doing as they participate in the build of an Interorbital Neutrino bi-propellant liquid rocket kit.
www.interorbital.com