Success once again for Arianespace and for global telecommunications with the launch of the Intelsat 39 and EDRS-C satellites, both deployed to geostationary transfer orbit on the company’s latest flight using a workhorse Ariane 5.

This mission — designated Flight VA249 in Arianespace’s numbering system —– was performed from the Spaceport’s ELA-3 launch zone in French Guiana, with Ariane 5 deploying its passengers during a mission that lasted 33 minutes from liftoff to final separation.

This launch was a daytime event as the Ariane 5 lifted off as scheduled at 4:30 p.m. (local time in French Guiana), providing an excellent view of the launcher’s initial trajectory during its daytime launch, including separation of the two solid propellant boosters at just over two minutes into the flight. 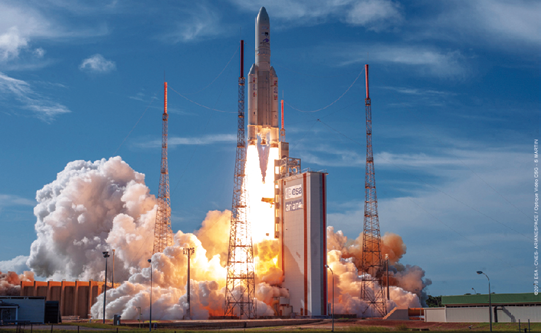 Arianespace’s Flight VA249: The Ariane 5 lifts off from French Guiana. Photo is courtesy of Arianespace. 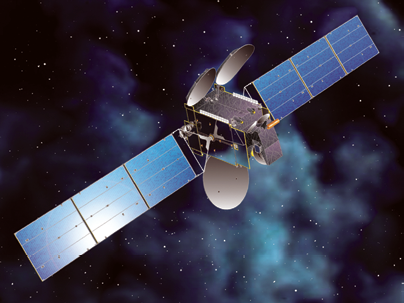 Artistic rendition of the Intelsat 39 satellite is courtesy of Maxar.

Ariane 5, which is delivered to Arianespace by ArianeGroup as production prime contractor, delivered an estimated total lift performance of 10,260 kg. on Tuesday’s mission, factoring in Intelsat 39 and EDRS-C, plus hardware for the dual-payload deployment system.

Deployed first in the flight sequence, Intelsat 39 is designed with both wide and high-powered steerable spot beams to meet the needs of broadband networking, video and government customers across Africa, Asia, Europe, the Middle East and Indian Ocean region. The steerable spot beams provide flexibility within the payload and enable customers to rapidly and efficiently respond to shifts in geographic or
application requirements. 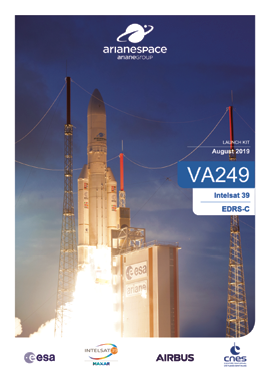 Intelsat 39 is the 61st Intelsat spacecraft launched on an Arianespace mission, continuing a partnership that extends back to 1983.

This satellite will replace Intelsat 902 that was lofted by Arianespace in 2011 to an orbital position of 62 degrees East.

EDRS-C — released next in the flight sequence, four minutes after Intelsat 39 — is the second node of the SpaceDataHighway, which is the world’s first “optical fiber” network in the sky based on cutting-edge laser technology.

Permanently fixed over a network of ground stations, the SpaceDataHighway will help improve environmental and security monitoring, disaster response and crisis management.

Based on a platform supplied by OHB System, EDRS-C will be able to connect low-orbiting observation satellites via laser at a distance up to 45,000 km., as well as unmanned aerial vehicles or mission aircraft — operating from an orbital position at 31 degrees East.

The SpaceDataHighway is a public–private partnership between Airbus and the European Space Agency (ESA), with the laser terminals developed by Tesat-Spacecom and Germany’s DLR Aerospace Center.

Airbus owns, operates and provides services for the SpaceDataHighway. EDRS-C was the 132nd satellite launched by Arianespace at the service of Airbus.

EDRS-C also carried a hosted payload — HYLAS 3 —– which was provided by Avanti Communications under a contract with ESA as a customer-furnished item to OHB and is this operator’s fourth satellite to be launched by Arianespace. 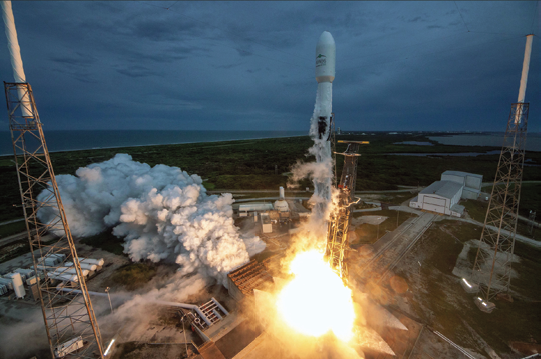 The SpaceX launch of Spacecom’s AMOS-17 satellite. Photo is courtesy of SpaceX.

This was the third and final flight for this particular Falcon 9 first stage, having previously supported the Telstar-19 VANTAGE mission in July 2018 and the Es’hail-2 mission in November 2018.

Falcon 9’s first stage for the AMOS-17 mission previously supported the Telstar-19 VANTAGE mission in July 2018 and the Es’hail-2 mission in November 2018.

With its extensive abilities, flexibility, and reliability, AMOS-17 is poised to support growth in a variety of broadcast, broadband, mobility,
and data services throughout the African continent.

Following a sequence of In-Orbit Tests that are expected to take approximately three months, AMOS-17 is scheduled to begin commercial operations at the 17 degrees E orbital position later in 2019.

Spacecom CEO and president David Pollack stated, “AMOS-17 places us directly into the exciting growth of Africa’s Sub-Saharan vibrant markets. As a leading multi-regional satellite operator, Spacecom is introducing the most technologically advanced satellite with HTS beams to service Africa where AMOS-17 will deliver a large selection of services to a variety of broadcast, broadband and telecom clients.” 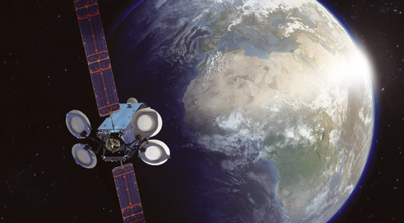 AMOS-17 will operate C-, Ku- and Ka-bands with a digital channelizer to provide fixed high throughput (HTS) C-band coverage to Africa, steerable HTS Ka-band coverage to anywhere from China to Brazil, and extensive Ku-band coverage throughout Africa with additional coverage in Europe, the Middle East, China, and India.

The satellite’s digital processing capabilities provide connectivity between all of AMOS-17’s beams in all available bands in any combination. These capabilities also support suppression of interference, flexible capacity allocation, and other digital processing features for improved service. Additionally, all command and control channels, as well as telemetry, are encrypted for maximum security.

AMOS-17 is planned to be in operation for a minimum of 20 years through 2039, enabling long-lasting and stable service. Once operational, it will be the most advanced high-throughput satellite to provide satellite communication services to Africa. The combination of the flexibility of the digital platform with the mix of fixed and steerable beams ensures fast response to changing customers’ needs.

The AMOS-17 satellite will provide a great fit for Spacecom’s expansion strategy, offering an innovative design with capabilities that provide flexible service offerings to meet the growing demands of their customers. AMOS-17 will enhance their capabilities as a growing and customer focused satellite operator.
www.spacex.com