The excitement aboard Honeywell’s Boeing 757 commercial test aircraft on December 11, 2019, was palpable. The 18 passengers, which included Gilat's Director of SatCom-on-the-Move (STOM) Programs Liran Wiener and Airborne Strategic Account Manager Benny Friedman, were expecting to break through an industry and technological barrier that had never been previously crossed. They were about to become the first to test in-flight connectivity using an Electronically Steered Antenna (ESA) terminal over Ka-band capacity on a High Throughput Satellite (HTS).

The Gilat ESA test team about to board the Honeywell test aircraft. Photo is courtesy of Gilat.

Their mission was to demonstrate concurrent broadband connectivity enabled by ESA throughout the flight, including video conferencing, YouTube video streaming and voice telecom. One key challenge was to maintain consistent tracking of the satellite while on-the-move from the gate until after landing, demonstrating gate-to-gate operation.

Before take-off, the team settled into their seats, opened their laptops and mobile devices and began to surf the web. As the plane pulled away from the gate and made its way along the tarmac, Wiener, Friedman and their fellow passengers began streaming 4K and Full HD 1080P videos from YouTube, surfing the web and listening to streaming music services. 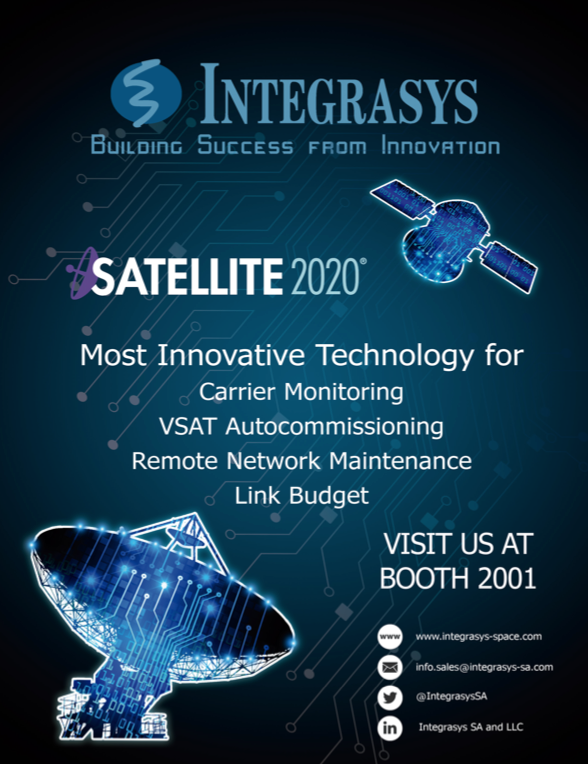 When the plane began to accelerate down the runway, all eyes remained glued to their screens, with one question dangling in front of them — would Gilat’s ESA terminal successfully maintain connectivity as the plane rose through the air?

As the plane ascended through the clouds and high into the sky, the answer was a resounding, thrilling “Yes!” Cheers, high fives, and “Wows!” were heard throughout the cabin. All the devices on board maintained their connectivity as the plane arrived at its cruising altitude. The connectivity, which provided impressive upload and download speeds, was maintained throughout the flight despite in-air turbulence, bank-turn aircraft maneuvers, flying in and out of beams, and rain on the ground.

In-Flight Satellite Connectivity with ESA
While most passengers take in-flight Wi-Fi for granted, connecting a satellite to a moving target is not an easy task. A special tracking, or On-the-Move, antenna is required to successfully connect satellites with airplanes. Most mechanically rotating antennas have a major limitation — they are comprised of moving, physical components, which makes them highly susceptible to mechanical failures.

The ESA system moves the beam electronically and maintains both receive and transmit tracking of the GEO satellite while the aircraft is in motion. Fortunately, the new ESA technology is more adept at handling fast changes in either the moving platform, in this case the plane, or with the target satellite. For instance, for the purpose of fast beam switching, or when tracking LEO/MEO satellites that are continuously moving across the skies.

Gilat's ESA isn’t limited to cruising altitudes. The antenna allows for gate-to-gate connectivity — passengers can connect to the plane’s Wi-Fi immediately upon boarding the plane and then maintain that connectivity throughout takeoff, landing and taxiing to the terminal gate at the end of the flight.

Live Streaming From 37,000 Feet
As the plane flew over the Caribbean Sea at 37,000 feet, Liran Wiener opened his video conferencing software and called Timor Blau, Gilat’s head of Inflight Connectivity, who was stationed in the company’s North American offices.

“For the first time ever, we are talking with you in-flight using a fully-functioning electronically steered antenna,” Wiener told Blau. “Isn’t that amazing?”

“Spectacular achievement,” responded Blau, before asking, “What have you demonstrated so far?”

“We have demonstrated broadband connectivity with download speeds of 21.8 Mbps and upload speeds of 8 Mbps. In addition to this video conference we are holding with you, we have also demonstrated video streaming from YouTube and voice telecom, all at once,” replied Wiener.

“Were there any limitations? Was the connection good?” asked Blau. 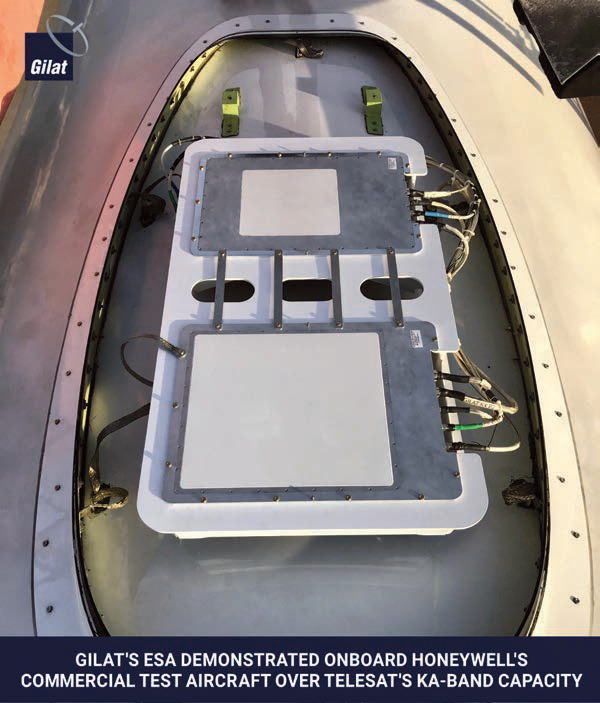 Wiener responded, “Impressively, throughout all the demonstrations that I mentioned the antenna kept the connectivity very well. This includes bank turn maneuvers of the aircraft, flying a repeated triangular route. The terminal maintained consistent tracking of the satellite while on-the-move.”

Wiener paused a moment before replying, “I want to add that we have been connected through the ESA terminal from the gate and will maintain the connection even after landing. We are so proud to be demonstrating gate-to-gate operation!”

What’s Next for Gilat’s ESA
This initial test was an overwhelming success for Gilat, as well as for Honeywell and Telesat. In a statement released after the test, Kevin Calcagni, CTO at Honeywell Connected Enterprise, Aerospace said, "Honeywell sees the electronically steered antenna as a key future technology, and this test is an important milestone showcasing its potential."

Calcagni further added, “We have been investing in this technology for several years, and in parallel look to industry partners to innovate with us. We are pleased to successfully collaborate with Gilat in this pilot...”

Telesat Director of Engineering Michel Forest noted, “Gilat’s ESA innovations demonstrate the ability to access and unleash the throughput and performance of Ka-band HTS beams with a low-profile antenna as desired by airlines.”

Gilat's Airborne Strategic Account Manager, Benny Friedman, remarked, “This exciting solution meets the communication needs of the aero market including both commercial and smaller jets that until now could not be served efficiently by existing solutions and opens up great opportunity for Gilat both over GEO satellites and non-GEO constellations.”

For Gilat, the test proved that when it comes to antenna terminals, the future of connectivity is now. In this remarkable demonstration of broadband connectivity, Gilat broke through barriers with its newly developed ESA and achieved outstanding results.

The ESA flight test is a major milestone, but only a first step in Gilat’s roadmap for the development of ESA technology and products. Gilat is highly focused on bringing these solutions to market for both current and future constellations.

After successfully passing the test and becoming the first to achieve this industry milestone, Gilat will look to further commercialize ESA products in order for passengers on planes around the world can experience uninterrupted in-flight and gate-to-gate SATCOM connectivity. 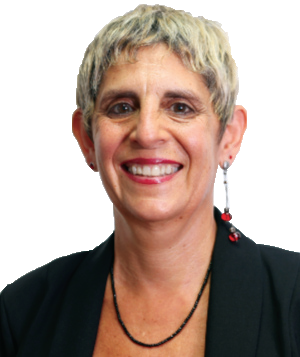 Doreet Oren (doreeto@gilat.com) is Director of Product Marketing and Corporate Communications for Gilat Satellite Networks. Doreet Oren has been in this role since 2012 and has been responsible for defining product positioning, messaging, go-to-market strategies, market research, and analyst relations. Oren has more than 20 years of industry experience, and has held management positions in R&D, product management and product marketing, for international high-tech companies. In this capacity she contributed to next generation product definition and was responsible for delivering the company’s vision to the media and analyst community. Oren has published thought leadership articles in renowned, international journals and has spoken at numerous industry conferences worldwide. Oren received a BSc in Computer Science from George Washington University.

On February 19, 2020, the company announced that their first-to-flight Electronically Steered Antenna (ESA) terminal achieved another industry-first with in-flight connectivity over NGSO (Non-Geostationary Orbit) — this success well-positions Gilat to win opportunities within the ESA market.

Gilat’s high throughput and small form factor ESA operated continuously over GEO and then instantaneously switched connectivity to operate on LEO when it came into view and then back to GEO after operating on LEO. The ESA terminal demonstrated high performance, with broadband throughput of up to 58 Mbit/sec on both FWD and RTN, round trip delay as low as 18 msec. and robust operation at low elevation angles of down to 20 degrees.

Gilat’s ESA has a no moving parts and is a full electronic beam steering flat panel antenna with an extremely low profile. The company’s innovative design combines the benefits of ESA with the advantages of Ka-band, as highlighted by the performance achieved in this testing. The ESA terminal serves both GEO and NGSO constellations and, as such, opens the market to low latency, real-time applications.

Michel Forest, Director of Systems Engineering for the LEO Program at Telesat, said that Gilat’s multi-orbit ESA switchover capabilities will enable airlines to future-proof their connectivity decisions. Airlines will be able to access high-performing Ka-band connectivity today and easily incorporate LEO low-latency connectivity without replacing terminals. The company's ongoing development efforts with valued partner Gilat will ensure airlines have flexibility and ability to meet their inflight data requirements of the future.

Roni Stoleru, the VP of Antenna Products & Strategy at Gilat, added that the company's innovative ESA terminal opens up great opportunities in the commercial and business aviation markets with a winning proposition that addresses the two major ESA industry growth dynamics: mobility, with emphasis on in-flight connectivity and the upcoming NGSO constellations. Gilat is appreciative of the collaboration with the firm's long-standing partners, Honeywell and Telesat, and looks forward to continued cooperation.