This has earned Maxar a reputation in the U.S. space industry as the most experienced integrator of electric propulsion systems on geosynchronous satellites. 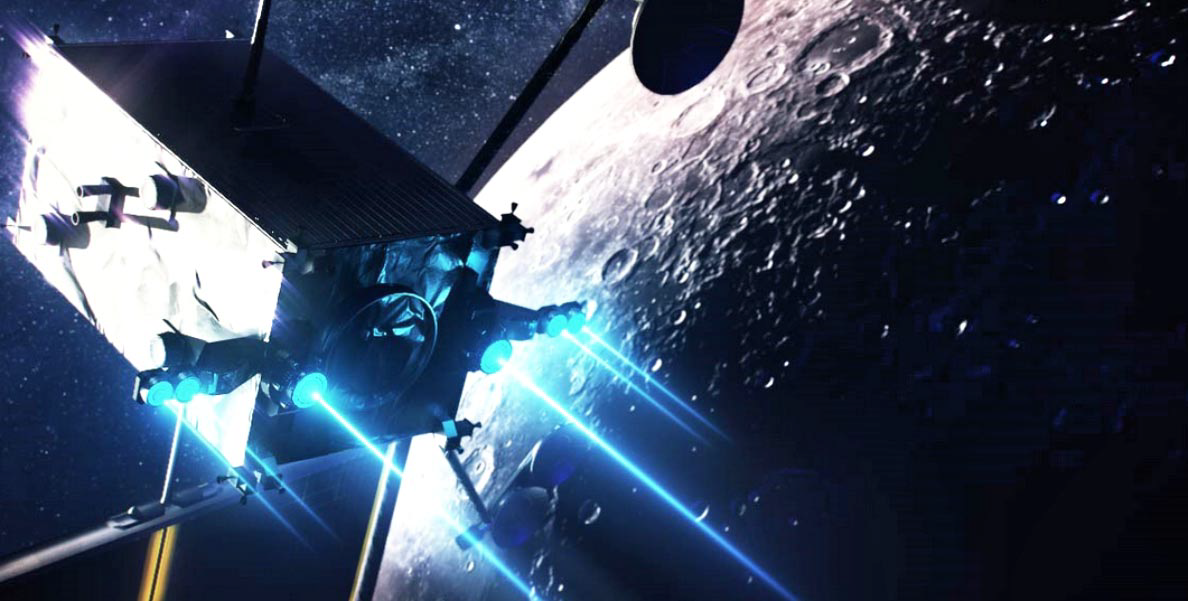 But what is electric propulsion (EP) and how does it differ from the chemical propulsion systems found on standard spacecraft? Is it similar to the difference between a traditional gasoline-powered car versus the increasingly popular electric car? Some aspects of this comparison are relevant, but other parts are genuine rocket science. 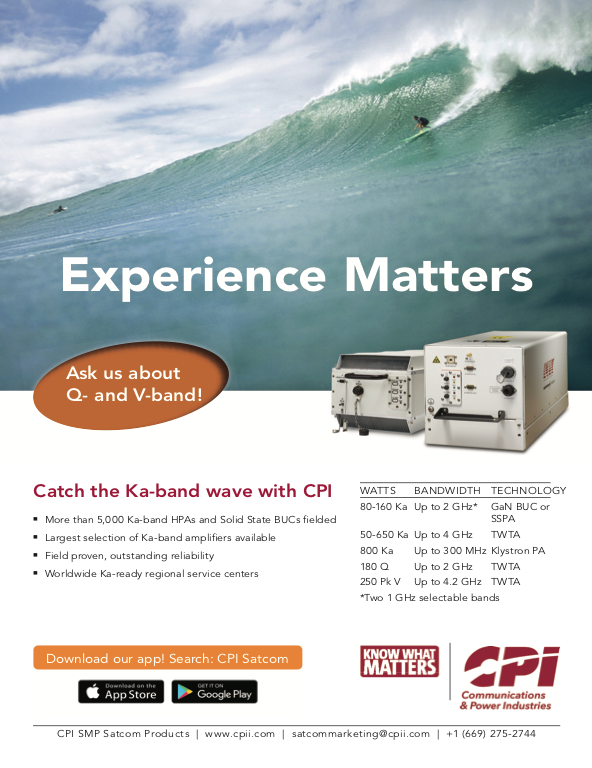 The gasoline car runs on a chemical fuel that is combusted inside the engine to release energy that makes the car’s wheels move. On a spacecraft, chemical thrusters have combustion chambers where burning a fuel/oxidizer mixture produces heat and pressure to create an exhaust gas that shoots out a nozzle. The exhaust plume’s equal and opposite effect (remember that guy Isaac Newton?) is the force that moves the spacecraft. Electric propulsion thrusters emit a blue glow when firing (see image at the top of the right column).

Now, let’s look at the electric car and how it’s similar to the EP thruster. The electric car receives its energy from a large, rechargeable battery that runs a motor to turn the wheels. While spacecraft do have batteries, they use a better energy source–the sun. Solar arrays collect solar power, and the voltage of this power is boosted and sent to an innovative EP thruster.

A complicated electromagnetic process happens inside the thruster with fuel that’s on board (typically Xenon in current systems) to create ions, which are sped up through a electric field to create an exhaust plume. As with chemical systems, this exhaust plume is what pushes the spacecraft in the direction it needs to go.

Just like automobile efficiency in miles per gallon, spacecraft propulsion has an efficiency rating called specific impulse, written as Isp, which benchmarks how much spacecraft speed changes per unit of propellant through the thruster. Just as electric cars have better “efficiency” than gas cars ($4 per gallon of gas makes electric look good), the EP system Isp is generally six to 10 times more efficient than the chemical propulsion Isp.

However, where’s the oxygen and oxidizer? There is none in EP — even more interesting and important is these EP systems cannot run in an atmosphere — only in the vacuum of space.

Electric thrusters sound great, so what’s the catch? Now we have to tolerate a little bit of rocket science. EP thrust is weaker than chemical thrust. This means speeding up takes more time. This is rooted in things such as propellant mass flow rates, energy levels and the exhaust velocities and molecular weights of the particles shooting out.

Maxar uses chemical thrusters for orbit control that produce 5 lbs. of force, but its EP thrusters currently make about 0.05 lbs. of force. Even though the EP thrust is very low, journeys through space often take a long time, which allows the EP system to deliver the same velocity increase as a chemical system. 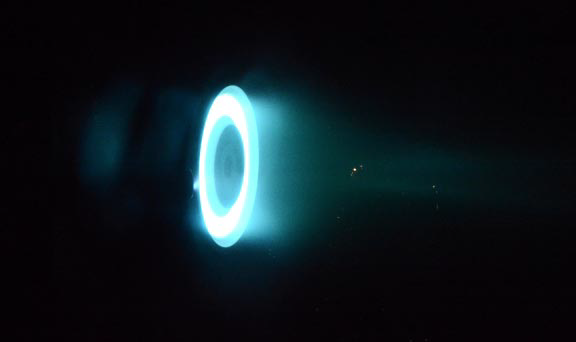 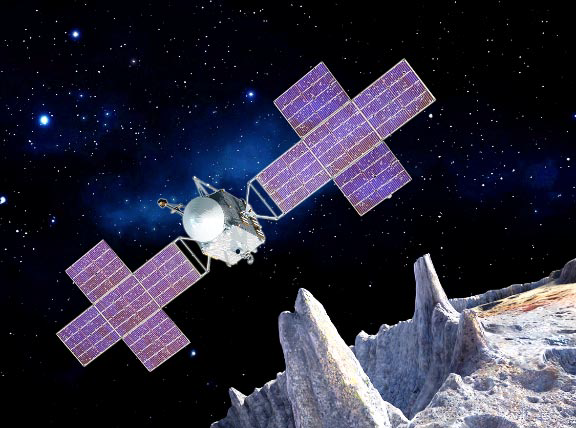 Recently, Maxar’s first all EP spacecraft named EUTELSAT 7C completed its orbit raising phase with over 100 days of continuous EP thrusting. A similar phase with chemical thrusters would have taken about one week... ah, but it would have required 1,200 kg more fuel —equivalent to roughly 50 percent of EUTELSAT 7C’s weight without fuel. Launched in 2019, the Maxar-built EUTELSAT 7C communications satellite uses entirely electric propulsion. 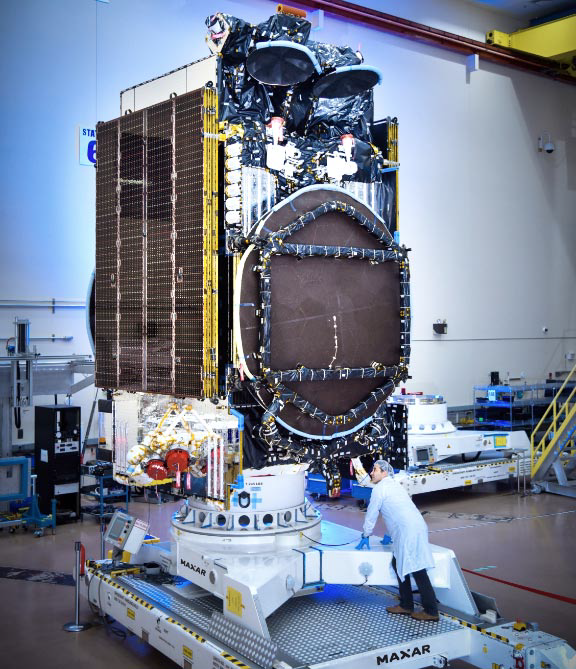 Maxar is leveraging its experience in EP to build a spacecraft that NASA will use to explore a metallic asteroid in the main asteroid belt, called (16) Psyche. The Psyche spacecraft uses large, high power solar arrays, carefully tuned to work in the dim sunlight of deep space, to produce electricity that powers the EP system, as well as the rest of the spacecraft, including science instruments and communications equipment to transmit data back to Earth.

Because the asteroid is three times farther away from the Sun than the Earth, the EP system on the Psyche mission is customized to operate with significantly less power than typical Earth-orbiting spacecraft. Psyche’s EP system is much more efficient than a traditional chemical propulsion system, making the Psyche spacecraft lighter and easier to launch from Earth.

This efficiency boost from EP will be more crucial during the first demonstration of Maxar’s Power and Propulsion Element, which starts the construction of the NASA-led lunar Gateway. As part of NASA’s Artemis Program, the Gateway will help put the first woman and next man on the Moon by 2024 and enable future missions to Mars. This solar electric propulsion system will create about 40 kW of power compared to the roughly 13 kW used on EUTELSAT 7C.

NASA’s planned exploration of the Moon, Mars and beyond includes the use of EP tugs to transport fuel, equipment and other logistical supplies over long distances to prepare for and sustain human activities. EP supplied by Maxar will be a critical part of future space infrastructure.
www.maxar.com