For many people, ships seem an incidental part of their reality. Beyond a momentary feeling of awe as they spot one of these ocean leviathans unloading in port, or a distant view from the beach as a container vessel slips over the horizon bound for who-knows-where, they appear to have little impact on everyday life. However, take a moment to consider what these huge ships are carrying and the reality soon becomes clear that maritime trade is at the heart of everything we do.

Approximately 9 percent of the world’s goods will, at some point in their journey, be transported by sea. That adds up to about 11 billion tons of cargo every year, making the shipping industry a huge exercise in global, distributed logistics. Even with the efficiencies afforded by containerization, this a task of considerable complexity to ensure that an entire ship’s cargo is ready to be loaded at the allotted time, that the vessel makes its voyage to arrive punctually at the destination port — but not so early that it spends excessive time waiting — and that the land-based infrastructure is ready to accept the influx of up to 9,000 40 foot containers.

To manage that scale of operation, communications are key and become even more so, as specific needs such as preserving perishable goods are factored into the planning. To use the fruit industry as an example, approximately 20 million tons of bananas are exported globally each year, most of which end up on ships. These are washed, boxed and labelled at their source before being loaded into refrigerated containers for transport. From the moment they are picked, the clock is ticking, and although bananas are picked green and ripened in forced ripening centers just before sale, undue shipping delays or onboard systems failures can ruin a shipment, with consequent economic loss. 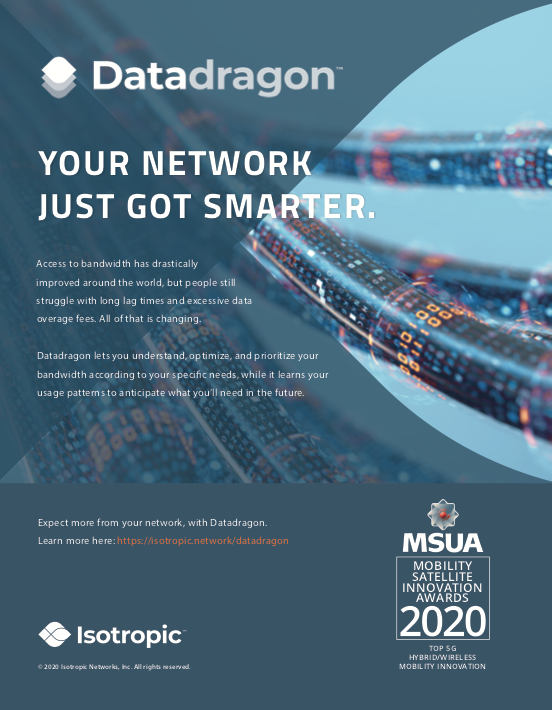 The largest global exporter of bananas is Ecuador, with a shipping time to Europe of around 35 days. Not so long ago, once a vessel had departed from Ecuador, it could only share a minimal amount of information with its fleet operator, owing to the tiny bandwidth available. It would then arrive, at some point during a large time allowance made necessary by the ship’s uncertain ETA, at its destination.

Today, that same vessel’s progress is not only tracked, but huge amounts of onboard data can be shared with company headquarters. We live in the era of the Smart Ship, and most new vessels are now being built with some level of smart capability. Hyundai Heavy Industries, for instance — the world’s largest shipbuilder, with a market share of approximately 23 percent — has been fitting its Integrated Smart Ship Solution (ISSS) to all new-build vessels since 2017. Smart Ships can share virtually any aspect of their onboard systems: speed, fuel consumption, bearing temperatures, watertight door integrity, CCTV… the list is endless, and in the case of our banana carrier cargo monitoring is likely to be added to the mix, documenting the temperature of each container.

Remote diagnosis and guided repair are also becoming increasingly common, whereby an onshore expert can review sensor readings, helping to predict failures and advising the onboard engineers as to viable repairs. This might involve video and shared screens, while for crew welfare, video calls and streaming are becoming commonplace.

All this requires bandwidth, and — especially if video is required —lots of it. The only way to deliver that at sea is using VSAT, and it is this commoditization of what was once regarded as a luxury that is driving antenna manufacturers such as Intellian to make their products easier to install, network-agnostic and cheaper to buy.

“VSAT user terminals used to be very complex and expensive,” said Jon Harrison, Vice President and General Manager at Intellian. “If you imagine a pyramid of addressable vessels requiring connectivity, VSAT was only used by the top sector – about 75,000 ships. Less complex and commoditized terminals cost a fraction of the price, so we’re able to target the next layer of the pyramid, a much bigger market which could be up to 500,000 vessels. But to do that we need to deliver an easier onboard package, not just an antenna.” 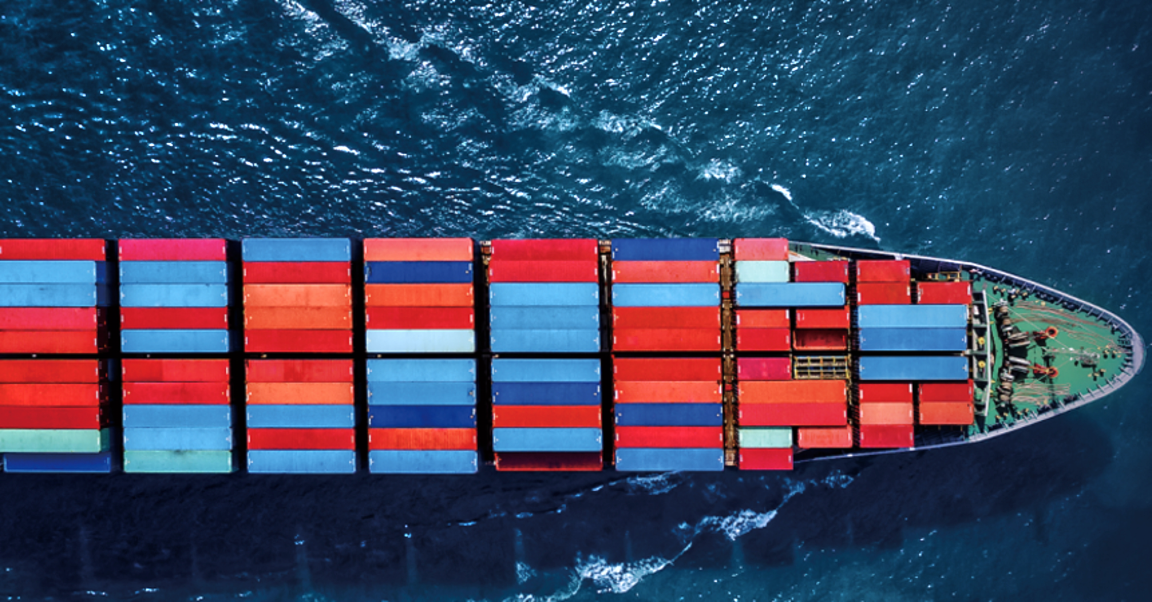 Intellian’s approach to commoditizing VSAT is embodied by the firm’s NX Series antennas, which span five models from 60 to 150 cm. This range of sizes in itself makes the NX Series an easy choice for the operators of diverse fleets, as all of the terminals share a standard, below-deck, Antenna Control Unit (ACU) as well as the same AptusNX configuration and management software,. This configuration allows the operator to select an antenna that fits the space and bandwidth requirements of each of their vessels without getting to grips with disparate systems.

The NX Series antennas are designed to be future-proof, capable of tracking GEO, MEO and LEO satellites and convertible between Ku- and Ka-bands. Upgradable BUCs — fitting is a straight swap — allow higher power units to be used where greater upload bandwidth is required. This makes them compatible with all existing and planned networks, and permits customers both to take advantage of network upgrades or change providers if desired.

This flexible approach is underpinned by Intellian’s AptusNX software, which facilitates commissioning with a simple wizard and allows both local and remote health checks and diagnostics once installed, limiting the need for high-level onboard expertise.

Physical installation is also easier than ever: all NX antennas come pre-slung in compact shipping crates, have no shipping brackets — thanks to a dynamic braking system on the motors which damps movement in transit – and connect with a single cable carrying power, Tx and Rx signals.

These last two points obviate the need for the installer to remove the dome, helping to maintain waterproof integrity and avoid damage. They also share parts as much as possible. For example, the motors used to control the three planes of antenna movement are identical, and each one now also has the encoder built into the unit. This and similar innovations have resulted in a spare parts saving of almost 40 percent across the range, making it easier for customers and technicians to carry the correct components.

Intellian’s thinking has had to extend beyond antenna design to embrace this commoditized market. Increased demand has led to a shift in expectations, driving service providers toward supplying full equipment solutions, including the antenna and rack, thus simplifying installation and bringing down operational costs for the customer. 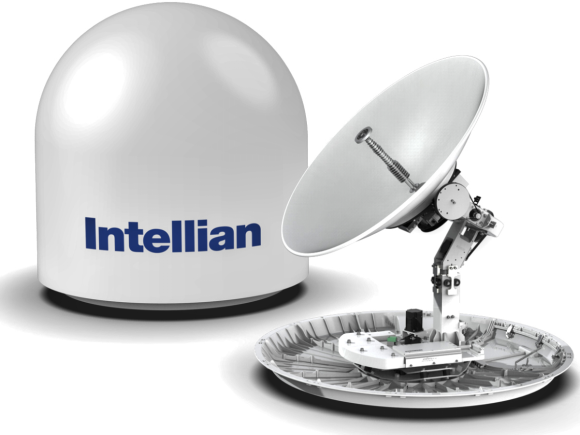 Several major service providers have changed their focus to delivering the ‘connected vessel’ and providing a virtual office environment, but this approach transfers the overheads from the customer to the provider. Intellian’s solution has been to increase support for its service partners: supplying off-the-shelf equipment racks ready to ship, providing comprehensive global logistics and warehousing, and reducing system package sizes as much as possible in order to minimize shipping costs.

The Future for Maritime VSAT

As more and more vessels gain higher bandwidth connections, the shipping industry is changing. Under pressure to operate more efficiently, not just to maintain profitability but also to minimize fuel consumption and emissions, the industry is making more use of its connectivity than ever before.

Global fleets are managed from shore-based centers to ensure that cargoes are delivered on time with the minimum use of fuel — a feat only made possible through continuous monitoring, as the dynamic parameters of weather and sea state constantly change the situation.

Equipment failure is minimized through systems monitoring, powered by shore-based computing far beyond what is possible with onboard processing power, informed by dynamic and historical data from other fleet vessels. Crew training and certification is increasingly being carried out online — a process which has been accelerated by the current pandemic — and the continuing development of autonomous systems is likely to make ships more, rather than less, dependent on shoreside intervention.

Although the container vessel slipping over the horizon mentioned at the beginning of this article might seem to be disappearing into romantic isolation, reality could not be further from the truth — our banana-carrier is remotely managed in every detail to ensure that the vessel’s cargo arrives in timely, efficient and tip-top condition and the crew are able to remain in constant touch with loved ones via calls and social media.

The modern vessel is never really separated from the shore — more a peninsula than an island. And that’s all made possible by one technical element: VSAT.
www.intelliantech.com

Jon Harrison is a Vice President and General Manager at Intellian Technologies. As a member of the Intellian Executive Team, Jon’s role is to develop Intellian’s global SATCOM-based business and the end-to-end welfare of the Intellian Europe, Middle East and Africa teams. Jon is often keynote speaker at many of the Intellian showcase events and has seen the satellite communication ecosystem evolve over the past 30 years, with data demands increasing exponentially. Jon has a Bachelor’s degree in Satellite Communication Technology and, more recently, an MBA.