The movement of data across satellite communications has traditionally been low bandwidth with high latency and very low efficiency. In addition the cost per MHz of satellite bandwidth is very expensive. A satellite transponder can cost from $1.0M to $1.5M per year. 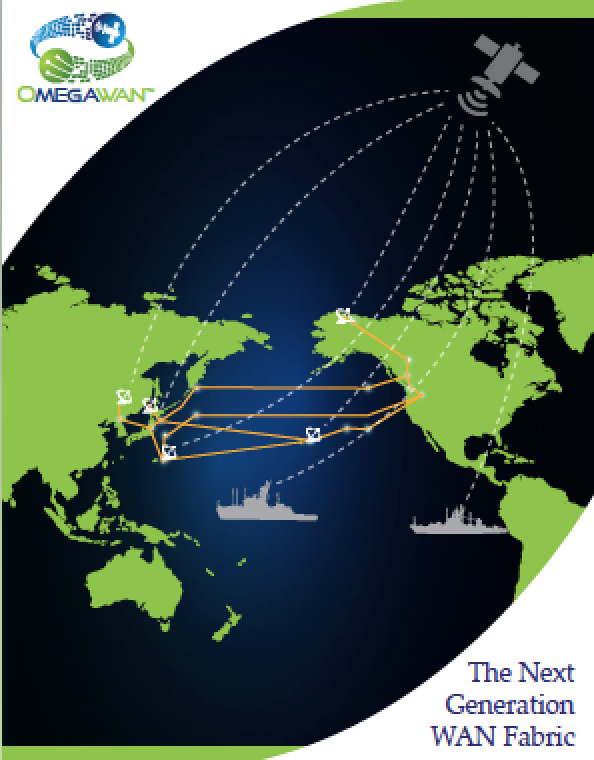 In this article, a solution is demonstrated that increases the effective bandwidth while increasing utilization. In the company’s lab and over live satellite, greater than 4bits/Hz Spectral Efficiency has been achieved, with link utilization consistently over 90 percent and, in some cases, as high as 96 percent.

The combination of increased Spectral Efficiency, while at the same time increasing the overall throughput, will dramatically reduce the effective cost per Mb of bandwidth and increasing ROI. Depending on the existing environment, this solution will increase effective bandwidth efficiency by a factor of five times and, in some cases, even higher.

The second environment employed real satellite communications to move data between two systems. There were two critical pieces of equipment used in these tests. They were the OmegaWAN solution in conjunction with the NovelSat NS3000 modem. The performance achieved in the live satellite test could be achieved using other satellite modems; however, for maximum performance over satellite, the Novelsat S3000 is recommended.

OmegaWAN
The OmegaWAN platform uses an RDMA based parallel file system and Bay Microsystems proprietary packet and transport processing technology, along with enhanced buffering and end-to-end flow control to reliably extend native InfiniBand over metro and wide area networks spanning from just a few miles to thousands of miles. 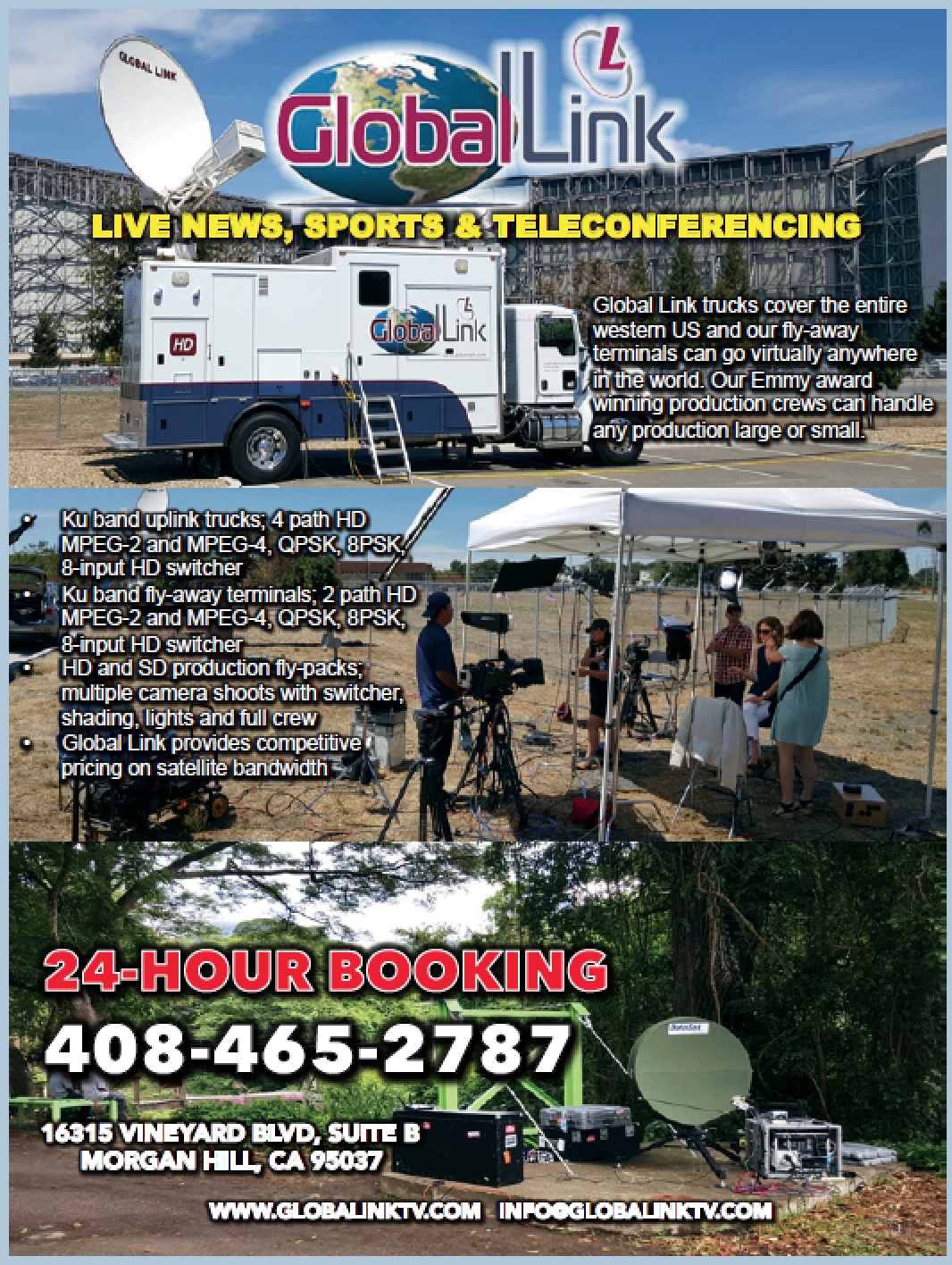 This allows OmegaWAN to provide seamless InfiniBand range extension over a variety of network infrastructures, thereby enabling IT managers to maintain protocol continuity beyond a single site to virtually anywhere around the globe without the need to modify existing applications or local InfiniBand network.

NovelSat NS3000
The NovelSat NS3000 Professional High-Data Rate Satellite Modem is one of the fastest, most bandwidth-efficient satellite modems. This translates into marked cost reduction for both point-to-point and point-to-multi point satellite links.

The NS3000 Modem delivers scalable data transmission rates of 100 Kbps up to 850 Mbps (bi-directional 425 Mbps) using (carrier-echo-cancellation). The NS3000 is a member of the NovelSat Professional Satellite Modem series, which also includes the NovelSat NS300.

Combining both a modulator and demodulator in a single unit, the NS3000 Modem is flexible enough to support all types of applications —from the smallest links to the world’s largest pipes. Ideal for satellite-based cellular backhaul as well as high data rate IP trunking applications where lack of infrastructure and challenging geography makes wire links impractical.

Lab Setup
The lab setup had all of the necessary equipment needed to simulate satellite connectivity for moving data between two systems, including latency. OmegaWAN is Linux based running an IBM Spectrum Scale file system on high-speed solid state drives. SSD’s were used to insure that the server’s local storage did not contribute negatively on performance.

Spectrum Scale has a very simple configuration with no special tunings. Both servers had a QDR Infiniband (IB) adapter, which was used for data transport between the servers. The OmegaWAN system is configured to accept an IB connection on the LAN side and its WAN side is a 1GbE connection.

The 1GbE WAN connection of both OmegaWAN systems would normally be attached to the satellite modem; however, for the lab test, a Linux based server was used that acted as a bridge network device between the two NovelSat Modems and was configured to inject latency equivalent to typical satellite delays. 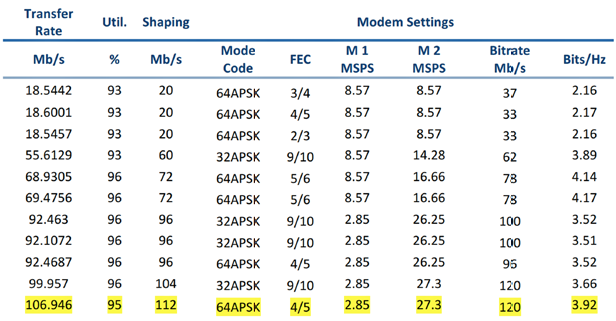 In addition to the IB LAN side connection, there was also a 1GbE LAN connection from each system. Although this test focused on moving data across the IB network, the two servers were also able to communicate via their 1GbE connections.

Satellite Test Setup
The actual satellite tests used the exact same equipment as the lab setup with the exception of the Linux Bridge used to insert latency. The NovelSat modems were connected to the necessary SATCOM equipment.

Satellite testing was performed from SDN Global’s Atlanta, Georgia, Teleport. The antenna used for testing was a 5.5 meter Scientific Atlantic Ku-band with a 100 Watt Advantech SSPA. The K21 and K22 transponders on the SES1 satellite located at 101 degrees West provided the satellite connectivity. For simplicity, the same antenna was used for both remote and hub. During the test no more than 50 percent of the SSPA’s power was used.

Test Results
The testing was performed under a variety of different settings. The key variables were the Mod Code, FEC, and MSPS settings on the NovelSat modems. The OmegaWAN system required no special tuning for the test. However, there was a shaping parameter (used to limit the maximum throughput out of the WAN side connection) that was used to overcome the lack of Pause Frame (IEEE 802.3x) support on the NovelSat modem. Note that support for Pause Frames would be available on the modems in the future. The testing was done by reading a series of large files (256 MB, 1 GB or 10 GB) files located on the Spectrum Scale Server from the Spectrum Scale Client.

The Spectrum Scale tool, gpfsperf, was used to perform the data movement and provide the performance numbers. Each data point reported below was an average of several tests. The measured latency during the tests was 506 to 523 ms.

The table above contains several of the tests that were performed.

The analysis of the data should be looked at from two perspectives. The first would be to look at what the OmegaWAN system provides and the second would be what the NS3000 is providing.

Quite clear is that the OmegWAN Solution can maintain very high utilization from the lowest bandwidth all the way to the highest. Also note that the OmegaWAN system could scale up to 40Gbs. In addition, due to the use of the shaping parameter, the tests could not fully use the available Bitrate of the modem, i.e., compare the Bitrate and shaping columns.

This issue will be addressed in the future when Pause Frames are implemented in the NS3000, which will yield slightly higher throughput. The NS3000 supports advanced coding (32APSK and 64APSK) and Forward Error Checking settings.

In Closing...
The combination of OmegaWAN and the NovelSat NS3000 proves to be a highly efficient solution for moving large volumes of data across a satellite connection. Each device adds a separate, but critical piece of the solution.

The OmegaWAN platform provides maximum utilization of the available bandwidth. This utilization is consistently greater than 90 percent and was measured as high as 96 percent.

The NS3000 provides very high Bits/Hz, in excess of 4 Bits/Hz through the use of advanced Modulation Coding and Error Correction.

Notes
1.    The OmegaWAN solution used for this test was outfitted with IBM Spectrum Scale. There are other RDMA based Parallel Files systems available for use. Spectrum Scale offered a simple solution for this application.